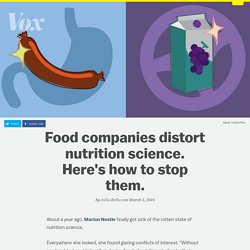 Everywhere she looked, she found glaring conflicts of interest. "Without any trouble, I could identify industry-funded nutrition studies by their titles," says the New York University professor. "It was so obvious. " Nestle kept seeing studies with very specific names, like, "Concord grape juice, cognitive function, and driving performance," or, "Walnut ingestion in adults at risk for diabetes. " These papers were funded by the food industry — a grape juice maker, walnut growers — and nearly always reached glowing conclusions about the food in question. Nestle had been researching nutrition long enough to know that there's rarely clear evidence that specific foods have such miraculous health effects. Nestle was noticing a pattern. The problem of food research funded by food companies Sarah Turbin/Vox Her findings so far are remarkable.

Nestle cautions that her tally is by no means exhaustive. Women's Health Activist Newsletter - MAI/JUIN 1999 - Corporate Funding and Conflict of Interest Among U.S. Non-Profit Women's He. Women's Health Activist Newsletter By Jane Sprague Zones and Adrians Fugh-Berman This paper, in its original format, was presented at the Annual Meeting of the American Public Health Association in Washington, DC on November 17, 1998. 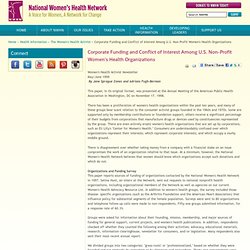 There has been a proliferation of women's health organizations within the past ten years, and many of these groups bear scant relation to the consumer activist groups founded in the 1960s and 1970s. Some are supported only by membership contributions or foundation support; others receive a significant percentage of their budgets from corporations that manufacture drugs or devices used by constituencies represented by the group. There are even entirely ersatz women's health organizations that are set up by corporations, such as Eli Lilly's "Center for Women's Health. " WIKIPEDIA - Conflict of interest.

The presence of a conflict of interest is independent of the occurrence of impropriety. 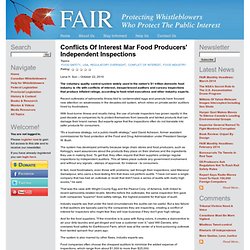 Sun – October 22, 2010 The voluntary quality control system widely used in the nation's $1 trillion domestic food industry is rife with conflicts of interest, inexperienced auditors and cursory inspections that produce inflated ratings, according to food retail executives and other industry experts. Recent outbreaks of salmonella illness tied to contaminated eggs and peanuts have focused new attention on weaknesses in the decades-old system, which relies on private-sector auditors hired by foodmakers.

With food-borne illness and recalls rising, the use of private inspectors has grown rapidly in the past decade as companies try to protect themselves from lawsuits and tainted products that can damage their brand names. But experts agree that the inspections often do not translate into safer products for consumers. In fact, most foodmakers, even those with problems, sail through their inspections, said Mansour Samadpour, who owns a food-testing firm that does not perform audits. Environ Health Perspect. 2006 March; 114(3): A147–A148. Credibility of Scientists: Conflict of Interest and Bias. Can Vet J Volume 37, December 1996 Question de deontologie du mois. 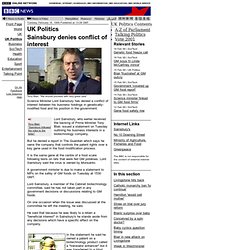 Lord Sainsbury, who earlier received the backing of Prime Minister Tony Blair, issued a statement on Tuesday outlining his business interests in a biotechnology company. But he denied a report in The Guardian which says he owns the company that controls the patent rights over a key gene used in the food modification process. It is the same gene at the centre of a food scare following tests on rats that were fed GM potatoes. Lord Sainsbury said the virus is owned by Monsanto. A government minister is due to make a statement to MPs on the safey of GM foods on Tuesday at 1530 GMT. Lord Sainsbury, a member of the Cabinet biotechnology committee, said he has not taken part in any government decisions or discussions relating to GM foods. On one occasion when the issue was discussed at the committee he left the meeting, he said.