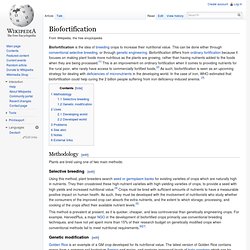 This can be done either through conventional selective breeding, or through genetic engineering. Biofortification differs from ordinary fortification because it focuses on making plant foods more nutritious as the plants are growing, rather than having nutrients added to the foods when they are being processed.[1] This is an improvement on ordinary fortification when it comes to providing nutrients for the rural poor, who rarely have access to commercially fortified foods.[2] As such, biofortification is seen as an upcoming strategy for dealing with deficiencies of micronutrients in the developing world. 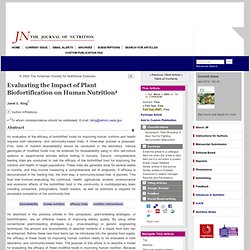 King2 + Author Affiliations ↵2To whom correspondence should be addressed. E-mail: jking@whnrc.usda.gov Abstract An evaluation of the efficacy of biofortified foods for improving human nutrition and health requires both laboratory- and community-based trials. As described in the previous articles in this symposium, plant-breeding strategies, or biofortification, are an effective means of improving dietary quality. Step one: assess nutrient bioavailability Bioavailability is defined in this article as the fraction of the ingested nutrient that is utilized for normal physiological functions or storage (1).

The bioavailability of nutrients from a food item may be influenced by a number of factors unrelated to the characteristics of the foodstuff, i.e., the previous intake of the nutrient, the body status of the nutrient, gut transit time, and gastrointestinal function. Methods used to assess nutrient bioavailability in humans Footnotes. J. Nutr. April 1, 2006 Biofortification of Staple Food Crops. Biofortification. 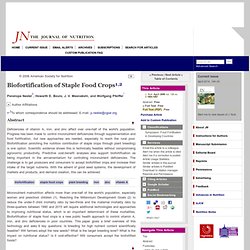 Biofortification is the development of micronutrient-dense staple crops using the best traditional breeding practices and modern biotechnology. This approach has multiple advantages. First, it capitalizes on the regular daily intake of a consistent and large amount of food staples by all family members. Because staple foods predominate in the diets of the poor, this strategy implicitly targets low-income households. Second, after the one-time investment to develop seeds that fortify themselves, recurrent costs are low, and germplasm can be shared internationally.

Biofortification requires that agricultural research make direct linkages with the human health and nutrition sectors (5). Is breeding for high nutrient content scientifically feasible? Ongoing transgenic research is exploring the use of an endosperm-specific promoter to deposit iron within the endosperm of rice so that it is not milled away (8). Can we get farmers to adopt? What is the target breeding level? 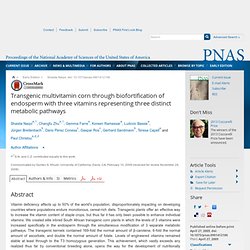 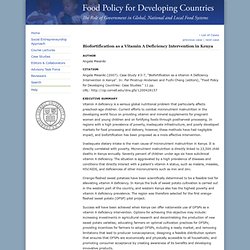 Biotechnology and Biofortification - Pocket K. The Ideal Diet: Sufficient and Balanced A major challenge of our time is that one sixth of the world’s population suffers from hunger, a situation which is totally unacceptable. 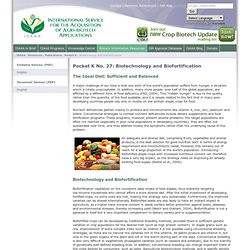 In addition, many more people, over half of the global population, are afflicted by a different form of food deficiency (FAO, 2004). This “hidden hunger” is due to the quality, rather than the quantity, of the food available, and it is closely related to the fact that in many poor developing countries people rely only or mostly on low-protein staple crops for food. Nutrient deficiencies pertain mainly to proteins and micronutrients like vitamin A, iron, zinc, selenium and iodine. Conventional strategies to combat nutrient deficiencies include dietary supplements and food fortification programs. RUTGERS UNIVERSITY/ CHINESE ACADEMY OF SCIENCES - 2008 - Biofortification for China: Political Responses to Food Fortification a.

Biofortification for China: Political Responses to Food Fortification and GM Technology, Interest Groups, and Possible Strategies Carl Pray Rutgers University Jikun Huang Chinese Academy of Sciences Despite making enormous strides in reducing poverty, hunger, and malnutrition, China still has large numbers of people who do not consume sufficient micronutrients such as iron, zinc and Vitamin A. 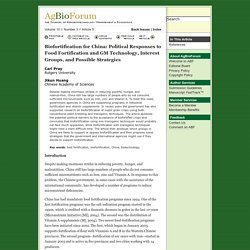