SCIENTIFIC REPORTS 04/02/21 A recombinase polymerase amplification assay for rapid detection of rabies virus. Ethical statement All samples used in this study were collected in the frame of the national integrated surveillance program for Rabies in Senegal or available from routine diagnostic activities of the national reference centers for rabies diagnosis in Senegal and Paris. 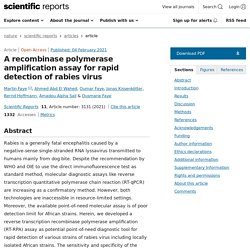 According to IACUC animal guidelines51, suckling mice were used in routine virus isolation at the animal laboratory in Institute Pasteur in Dakar accredited by WHO as Collaborating Centre for Arboviruses and Hemorrhagic Fevers, for surveillance, diagnostics and research as approved by the Senegalese national ethical committee. All viral isolations in suckling mice were performed in accordance with the ARRIVE guidelines52. VIRUSES 27/06/21 The Route of Administration of Rabies Vaccines: Comparing the Data. All articles published by MDPI are made immediately available worldwide under an open access license. 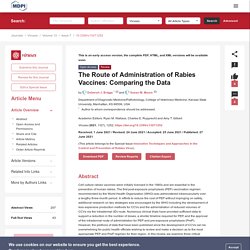 PATHOGENS 20/03/21 Rabies in Our Neighbourhood: Preparedness for an Emerging Infectious Disease. Emerging infectious disease (EID) events have the potential to cause devastating impacts on human, animal and environmental health. 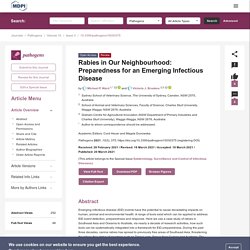 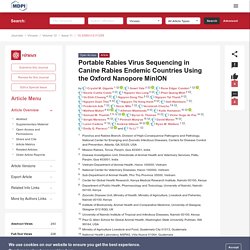 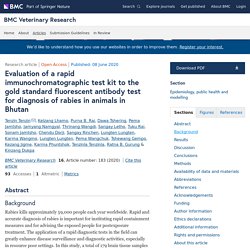 In the present study we have evaluated a commercially available rabies rapid kit produced by BioNote, Inc. (Hwaseong-si, Korea) for its fit-for-purpose for confirmation of clinical cases of rabies in animals for early response and enhancing rabies surveillance as recommended by OIE [13]. We first screened all suspected rabies brain samples using the rapid test in the field and then re-confirmed by the FAT. 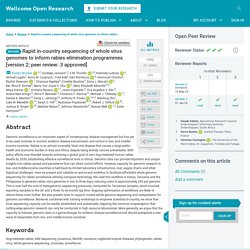 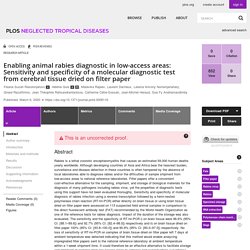 Although developing countries of Asia and Africa bear the heaviest burden, surveillance and disease detection in these countries is often hampered by the absence of local laboratories able to diagnose rabies and/or the difficulties of sample shipment from low-access areas to national reference laboratories. Filter papers offer a convenient cost-effective alternative for the sampling, shipment, and storage of biological materials for the diagnosis of many pathogens including rabies virus, yet the properties of diagnostic tests using this support have not been evaluated thoroughly. UNIV-BLIDA_DZ - JUIN 2019 - Thèse en ligne: ETUDE BIBLIOGRAPHIQUE SUR LRS ZOONOSES MAJEURS : LA RAGE, TUBERCULOSE, BRUCELLOSE. 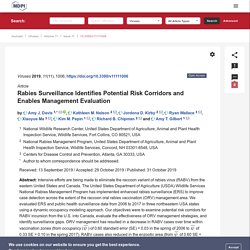 Introduction Intensive rabies management programs are implemented in the eastern United States and Canada to minimize the spread and eventually eliminate the raccoon variant of rabies virus. The primary method to manage the rabies virus (RABV) in wild carnivore populations is the use of oral vaccination at a landscape scale to reduce the susceptible portion of the population and consequently reduce transmission. Modeling studies focused on raccoons estimate that population immunity levels of 60%–90% may be necessary to control and eliminate raccoon RABV circulation, but ultimately levels of population immunity are sensitive to variation in host density and contact across a rural-urban continuum [1,2,3]. To vaccinate wild carnivore populations, vaccine baits are distributed in target areas defined by the host epizootiology and landscape barriers where relevant, a process referred to as oral rabies vaccination (ORV). 3. 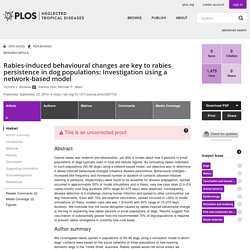 By simulating rabies outbreaks in such populations (50–90 dogs) using a network-based model, our objective was to determine if rabies-induced behavioural changes influence disease persistence. Behavioural changes–increased bite frequency and increased number or duration of contacts (disease-induced roaming or paralysis, respectively)–were found to be essential for disease propagation. BMC VETERINARY RESEARCH 12/11/18 Paralytic rabies in a goat. Rabies is an acute, progressive and fatal viral encephalitis caused by a neurotropic RNA virus in the family Rhabdoviridae, genus Lyssavirus, affecting all mammals [15]. 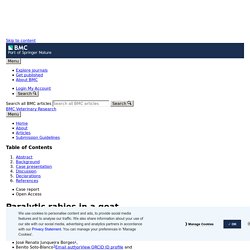 The rabies situation was then assessed to see if the SARE framework was sufficient and the regions were then ranked according to their obligation for rabies vaccination and whether rabies is endemic in that region or not. FRONT. VET. SCI 22/06/18 Understanding factors influencing dog owners’ intention to vaccinate against rabies evaluated using Health Belief Model constructs. 1College of Veterinary Medicine, Department of Diagnostic Medicine and Pathobiology, Kansas State University, United States 2College of Veterinary Medicine and Agriculture, Addis Ababa University, Ethiopia 3Atlantic Veterinary College, University of Prince Edward Island, Canada Ethiopia has one of the highest incidence levels of human rabies in Africa, with 3 to 7 deaths per 100,000 people annually.

SCIENTIFIC RESEARCH - FEV 2018 - patiotemporal Analysis and Predictive Modeling of Rabies in Tennessee. 1. Introduction Spatially and temporally, diseases have earned a noticeable level of recognition worldwide. All life forms are continually threatened by imminent diseases, yet these phenomena have also provided topics of ongoing research and obstacles to overcome [1] . J Virol Methods. 2017 May; Development and validation of sensitive real-time RT-PCR assay for broad detection of rabies virus.

Front. Vet. Sci., 31/08/17 Editorial: Towards Elimination of Dog Mediated Human Rabies. Editorial on the Research Topic Towards Elimination of Dog Mediated Human Rabies Rabies is a zoonotic viral disease with a high impact on human and animal health. The disease is almost 100% fatal after clinical signs appear and kills tens of thousands of people per year worldwide. FRONTIERS IN VETERINARY SCIENCE 21/06/17 The Role of Dog Population Management in Rabies Elimination – A review of current approaches and future opportunities.

PERSPECTIVES IN MEDICAL RESEARCH - JANV-APRIL 2017 - Epidemiology and Public Health Significance of Rabies. PLOS 26/06/15 Development of a Novel Rabies Simulation Model for Application in a Non-endemic Environment. Abstract Domestic dog rabies is an endemic disease in large parts of the developing world and also epidemic in previously free regions. For example, it continues to spread in eastern Indonesia and currently threatens adjacent rabies-free regions with high densities of free-roaming dogs, including remote northern Australia. Mathematical and simulation disease models are useful tools to provide insights on the most effective control strategies and to inform policy decisions. Existing rabies models typically focus on long-term control programs in endemic countries.

DONNISH JOURNAL OF GENERAL AND MOLECULAR VIROLOGY - OCT 2015 - Antigenic and genetic stability of rabies virus. PLOS 05/10/16 Validation of a Rapid Rabies Diagnostic Tool for Field Surveillance in Developing Countries. Abstract Background One root cause of the neglect of rabies is the lack of adequate diagnostic tests in the context of low income countries. A rapid, performance friendly and low cost method to detect rabies virus (RABV) in brain samples will contribute positively to surveillance and consequently to accurate data reporting, which is presently missing in the majority of rabies endemic countries. Methodology/Principal findings We evaluated a rapid immunodiagnostic test (RIDT) in comparison with the standard fluorescent antibody test (FAT) and confirmed the detection of the viral RNA by real time reverse transcription polymerase chain reaction (RT-qPCR).