NATURE - 1971 - Long term persistence of parathion in soil. BULLETIN OMS - 1960 - Studies of the genetics of resistance to parathion and malathion in the housefly. WIKIPEDIA ANGLOPHONE – Parathion. Parathion, also called parathion-ethyl or diethyl parathion and locally known as "Folidol", is an organophosphate compound. 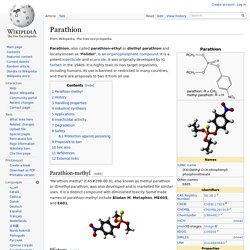 It is a potent insecticide and acaricide. It was originally developed by IG Farben in the 1940s. It is highly toxic to non-target organisms, including humans. Its use is banned or restricted in many countries, and there are proposals to ban it from all use. Parathion-methyl[edit] "Parathion-methyl" (CAS#298-00-0), also known as methyl parathion or dimethyl parathion, was also developed and is marketed for similar uses. History[edit] Parathion was developed by Gerhard Schrader for the German trust IG Farben in the 1940s. Handling properties[edit] Industrial synthesis[edit] 2 (C2H5O)2P(S)SH + 3 Cl2 → 2 (C2H5O)2P(S)Cl + S2Cl2 + 2 HCl (C2H5O)2P(S)Cl + NaOC6H4NO2 → (C2H5O)2P(S)OC6H4NO2 + NaCl Applications[edit] As a pesticide, parathion is generally applied by spraying. Insecticidal activity[edit] Parathion acts on the enzyme acetylcholinesterase, but indirectly.

Safety[edit] WIKIPEDIA – Parathion. Neurotoxicology and Teratology Volume 31, Issue 1, January-February 2009, Developmental neurotoxicity of parathion: Progressive effects on serotonergic systems in adolescence and adulthood. Abstract Neonatal exposures to organophosphates that are not acutely symptomatic or that produce little or no cholinesterase inhibition can nevertheless compromise the development and later function of critical neural pathways, including serotonin (5HT) systems that regulate emotional behaviors. 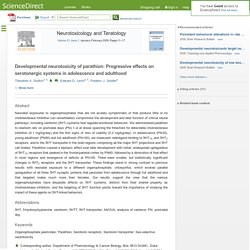 We administered parathion to newborn rats on postnatal days (PN) 1–4 at doses spanning the threshold for detectable cholinesterase inhibition (0.1 mg/kg/day) and the first signs of loss of viability (0.2 mg/kg/day). In adolescence (PN30), young adulthood (PN60) and full adulthood (PN100), we measured radioligand binding to 5HT1A and 5HT2 receptors, and to the 5HT transporter in the brain regions comprising all the major 5HT projections and 5HT cell bodies. Abbreviations 5HT, 5-hydroxytryptamine, serotonin; 5HTT, 5HT transporter; ANOVA, analysis of variance; PN, postnatal day. Keywords. Toxicol Mech Methods. 2004;15(1):33-52. Toxicokinetic modeling of parathion and its metabolites in humans for the determination of biological reference values. EPA 02/08/99 Methyl Parathion Risk Management Decision. Current as of: August 2, 1999 (amended August 10, 1999) On This Page: Action EPA has accepted voluntary cancellation of many of the most significant food crop uses of methyl parathion, one of the most toxic and most widely used organophosphate pesticides. 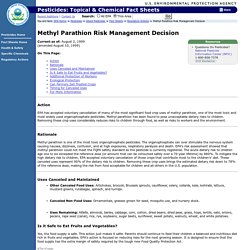 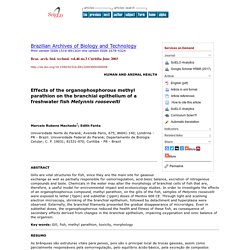