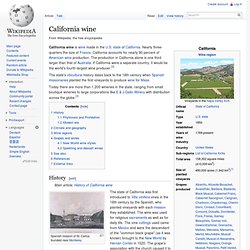 Nearly three-quarters the size of France, California accounts for nearly 90 percent of American wine production. The production in California alone is one third larger than that of Australia. If California were a separate country, it would be the world's fourth-largest wine producer.[2] Today there are more than 1,200 wineries in the state, ranging from small boutique wineries to large corporations like E & J Gallo Winery with distribution across the globe.[3] History[edit] Spanish mission of St. Phylloxera and Prohibition[edit] The late 19th century also saw the advent of the phylloxera epidemic which had already ravaged French and other European vineyards. Modern era[edit] A red wine from the notable Californian wine region of Napa Valley. The Robert Mondavi Winery was designed to reflect the winemaking history of the Spanish missions. 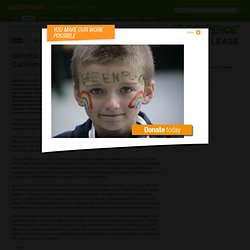 More than 30 requests for field trials of engineered grapes have already been granted in California and other states, including research into GE grapes resistant to Pierce's Disease. A Greenpeace survey of British retailers representing 80 percent of the UK's wine sales found that all would refuse to carry wine made from gene-altered grapes. Britain is the largest export market for California wine, consuming 30 percent of the state's wine exports. The report also includes a compilation of U.S. public opinion polls that show increasing concern among Americans about GE crops. "Consumers at home and abroad say they don't want genetically engineered wine," said Jeanne Merrill of Greenpeace. The report also found widespread rejection of genetic engineering elsewhere in Europe. University of California - California Wine Grape Growers’ Use of Powdery Mildew Forecasts. 1st International Symposium on Biological Control of Arthropods - ABIOTIC AND BIOTIC PEST REFUGES HAMPER BIOLOGICAL CONTROL OF M. 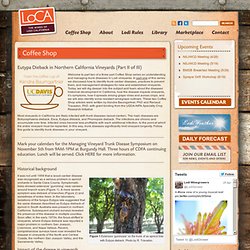 In part one of this series we discussed how to identify trunk canker diseases, practices to prevent them, and management strategies for new and established vineyards. Today, we will dig deeper into the subject and learn about the diseases’ historical development in California, how the disease impacts vineyards, it’s symptoms, how it spreads among grape vines and across crops, and we will also identify some resistant winegrape cultivars. These two Coffee Shop articles were written by Kendra Baumgartner, PhD and Renaud Travadon, PhD, with grant funding from the USDA-NIFA Specialty Crop Research Initiative Most vineyards in California are likely infected with trunk diseases (wood-canker). The main diseases are Botryosphaeria dieback, Esca, Eutypa dieback, and Phomopsis dieback. Figure 1 Extensive ‘gummosis’ on the trunk of an apricot tree with Eutypa dieback. 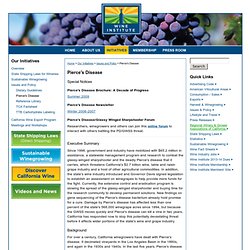 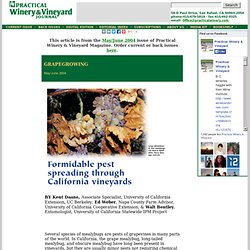 While it can be found on all parts of the vine at any time of the growing season, there are clear dispersal and abundance patterns that influence the amount of damage and the effectiveness of chemical and biological controls. For example, in the Coachella Valley, most of the vine mealybug population overwinters on the roots and lower trunk sections. As temperatures warm, populations rapidly increase reaching a peak in April and May. 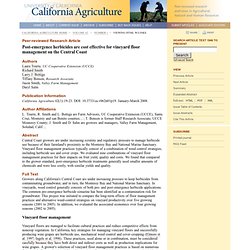