BMC VETERINARY RESEARCH 07/06/17 Modeling the spatio-temporal dynamics of porcine reproductive & respiratory syndrome cases at farm level using geographical distance and pig trade network matrices. In this paper, we used an advanced two-step parameter-driven approach to evaluate the spatio-temporal dynamics of PRRS from 2012 to July 2014 and predict the subsequent farm status (second half of 2014) in 124 swine production sites of US. 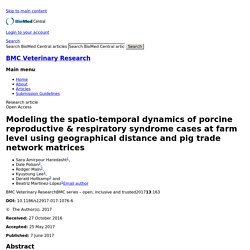 The model using the number of pig moved between the farms as a weight matrix exhibit a better predictive performance than the model just assuming the airborne spread from nearby farms. This suggests that pig trade may have a more important role in PRRS transmission dynamics than airborne transmission, at least in the endemic setting evaluated here. This model was also able to provide a temporal trend for the system (Fig. 2), which may be used to visualize if a system is improving over time and individual farm “scores” (Fig. 3) that could be used for benchmarking and prioritization of risk-reduction measures. Throughout the global swine industry, extensive efforts have been made to protect commercial swine farms from infection with PRRSV.

Can J Vet Res. 2002 Jul; 66(3): 191–195. Mechanical transmission of porcine reproductive and respiratory syndrome virus by mosquitoes, Aedes vexans (Meigen) PIGSITE 07/04/17 The Economics of PRRS. Featured Articles The Economics of PRRS 07 April 2017 Porcine reproductive and respiratory syndrome (PRRS) is an economically significant disease that can impact both the breeding and the wean-to-finish phases of production. (1) The clinical signs in the breeding herd are characterized by increased reproductive failure, such as the inability to conceive, increased late term abortions, premature farrowing, increase in mummified fetuses and stillborn pigs and markedly weak piglets most of which die prior to weaning. 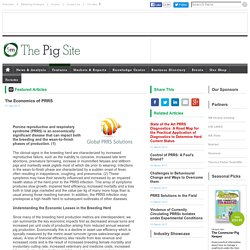 Infections in the wean-to-finish phase are characterized by a sudden onset of fever, often resulting in inappetance, coughing, and pneumonia. (2) These symptoms may have their severity influenced and increased by an impaired health status of the herd prior to the PRRS infection. Understanding the Economic Losses in the Breeding Herd Understanding the Economic Losses in the Wean-to-Finish Phase Estimating Economic Impacts with Stochastic Modeling Measuring Economic Impact Summary. ROSLIN_ED_AC_UK 24/02/17 Gene-edited pigs show signs of resistance to major viral disease Scientists have used advanced genetic techniques to produce pigs that are potentially resilient to Porcine Reproductive and Respiratory Syndrome (PRRS). 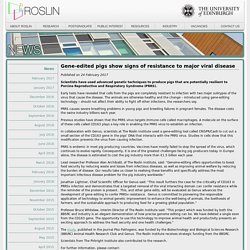 Early tests have revealed that cells from the pigs are completely resistant to infection with two major subtypes of the virus that cause the disease. The animals are otherwise healthy and the change – introduced using gene-editing technology – should not affect their ability to fight off other infections, the researchers say. VIRUS GENES - 2013 - Torque teno sus virus (TTSuV) in tissues of pigs and its relation with the occurrence of postweaning multisystemic wasting syndrome. 4th International Symposium on Emerging and Re-emerging Pig Diseases – Rome June 29th – July 2 nd , 2003 AIRBORNE TRANSMISSION OF PORCINE REPRODUCTIVE AND RESPIRATORY SYNDROME VIRUS BETWEEN PIG UNITS LOCATED AT CLOSE RANGE. UNIVERSITY OF MINNESOTA COLLEGE OF VETERINARY MEDICINE - Biosecurity protocols for the prevention of spread of porcin reproductive and respiratory syndrome virus.

SYVA via FACEBOOK 03/08/16 MÉTODOS DE ERRADICACIÓN DEL PRRS. PORCINE HEALTH MANAGEMENT 21/01/16 Novel analytic tools for the study of porcine reproductive and respiratory syndrome virus (PRRSv) in endemic settings: lessons learned in the U.S. Quantitative evaluation of control strategies for PRRSv at the regional level Implementation of mandatory control programs has resulted in the eradication of numerous swine diseases in the U.S., such as classical swine fever [7, 8] and Aujeszky’s disease [9, 10]. Despite the early adoption of a voluntary scheme for PRRS control [1], the disease has remained endemic [11, 12, 13], and represents one of the major production diseases causing more than $600 million annual losses [14].

Among the currently available strategies to prevent or control PRRSv infection and impact, intentional exposure of the population in sow farms to the virus (either using modified live vaccine or field strains) and elimination of positive sows using test-and-removal strategies (with or without complementary herd closure and rollover) have been evaluated as effective measures for on-site PRRSv control or eradication [1, 12, 15, 16, 17, 18]. PIG333 25/04/16 Assessing impact of 174 PRRSv on wean to finish pig health. PORCINE HEALTH MANAGEMENT 01/04/16 Modelling the within-herd transmission of Mycoplasma hyopneumoniae in closed pig herds. A stochastic compartmental model of within-herd transmission of M. hyopneumoniae was developed and used to assess the impact of different risk and protective factors and to compare potential control measures. 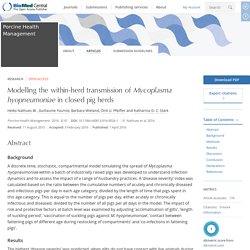 The results showed that appropriate gilt acclimatisation, short suckling period and maintenance of all-in-all-out procedure in all steps of production are the most important management factors for reducing within-herd transmission of M. hyopneumoniae. Farmers and veterinarians can carefully use this model and specifically the table with the outcomes of different scenarios to explore the most crucial points in a particular pig herd, where frequent transmission of M. hyopneumoniae occurs. The flexible model described in this study can be adapted to assess the transmission of the pathogen in different herd management systems, e.g. variation in the duration of suckling period, contact between pigs of different age etc. PIGSITE 22/01/16 Emerging Strains of PRRS Can Be Highly Virulent.

News Emerging Strains of PRRS Can Be Highly Virulent 22 January 2016 ANALYSIS - Emerging strains of Porcine Reproductive and Respiratory Syndrome (PRRS) can develop on a regularly basis and every few years a particularly virulent strain will arise and cause waves of disease, reports Sarah Mikesell from the North American PRRS Symposium. 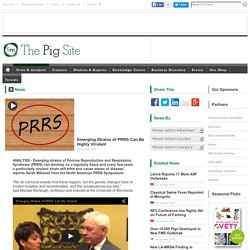 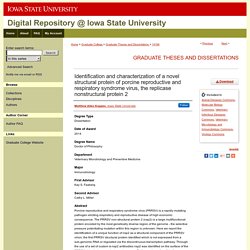 The PRRSV non-structural protein 2 (nsp2) is a large multifunctional protein encoded by the most genetically diverse region of the genome - the selective pressure potentiating mutation within this region is unknown. Here we report the identification of a unique function of nsp2 as a structural component of the PRRSV virion; the first PRRSV structural protein identified which is not expressed from a sub-genomic RNA or regulated via the discontinuous transcription pathway. Through the use of a set of custom á-nsp2 antibodies nsp2 was identified on the surface of the PRRSV virion by immunoelectron microscopy.

Further, a class of nsp2 isoforms was defined to be packaged within or upon the PRRSV virion. Together, these results define previously unknown attributes of nsp2. Recommended Citation. TECHNICAL UNIVERSITY OF DENMARK - 2013 - Thèse en ligne : Porcine Reproductive and Respiratory Syndrome Virus (PRRSV) IOWA STATE UNIVERSITY - 2014 - Thèse en ligne : Isotyping of porcine reproductive and respiratory syndrome (PRRS) virus antibody response and its diagnostic use. Abstract Porcine Reproductive and Respiratory Syndrome Virus (PRRSV) continues to be one of the most challenging diseases in the swine industry. 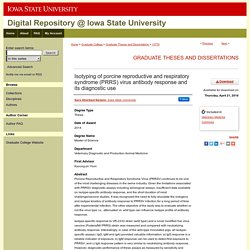 Given the limitations associated with PRRSV diagnostic assays including serological assays, insufficient data available on isotype-specific antibody response, and the short duration of most challenge/vaccine studies. It was recognized the need to fully elucidate the ontogeny and isotype kinetics of antibody response to PRRSV infection for a long period of time after experimental infection. The other objective of the study was to evaluate whether or not the virus type i.e., attenuated vs. wild type can influence isotype profile of antibody response. 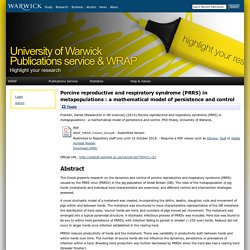 Abstract Treatment regimens for drugs approved for use in swine are derived from pharmacokinetic (PK) studies completed in healthy pigs. 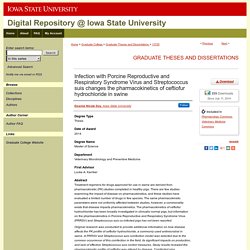 There are few studies examining the impact of disease on pharmacokinetics, and these studies have evaluated a limited number of drugs in few species. The same pharmacokinetic parameters were not uniformly affected between studies, however, a commonality exists that disease impacts pharmacokinetics. Vaccine Volume 32, Issue 43, 29 September 2014, Pages 5740–5748 Attenuation of highly pathogenic porcine reproductive and respiratory syndrome virus by inserting an additional transcription unit. CLINICAL AND VACCINE IMMUNOLOGY - OCT 2015 - Vaccination with a porcine reproductive and respiratory syndrome (PRRS) modified live virus vaccine followed by challenge with PRRSV and porcine circovirus type 2 (PCV2) protects against PRRS but enhances PCV2. 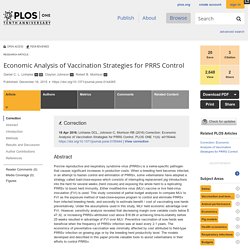 When a breeding herd becomes infected, in an attempt to hasten control and elimination of PRRSv, some veterinarians have adopted a strategy called load-close-expose which consists of interrupting replacement pig introductions into the herd for several weeks (herd closure) and exposing the whole herd to a replicating PRRSv to boost herd immunity. Either modified-live virus (MLV) vaccine or live field-virus inoculation (FVI) is used.

PRRSv is considered one of the most economically important infectious agents in the swine industry worldwide. This thesis evaluated immune management strategies to eliminate PRRSv from breeding herds, assessed the impact of those strategies in production losses, evaluated management risk factors associated with successful PRRSv elimination or failure, and lastly evaluated vaccination as means to reduce virus dissemination from infected growing pig populations. Chapter 2 compared the use of two immunogens as part of load-close-expose programs in regards to the time it takes to reach PRRSv stability (TTS) from infected breeding herds. Results showed that despite the great variability of TTS between enrolled herds, there were some variables associated with shorter TTS. Suggested Citation Linhares, Daniel Correia Lima. (2013). London Swine Conference (Canada) - 2006 - Au sommaire: Different Approaches to Handling PRRS.

Featured Articles Different Approaches To Handling PRRS 23 October 2006 By Monte McCaw, North Carolina State University - This article is from a collection of the scientific papers presented at the 2006 London Swine Conference. Developing methods to control PRRS is both a critical and long-standing challenge for the swine industry. To quote Dr. PRRS control strategies that work have been developed, each however usually limited to specific types of situations and production types.

For a more detailed review of current scientific knowledge read the 2003 PRRS Compendium, second edition. London Swine Conference (Canada) - 2007 - Au sommaire: Best Management Practices Used in the Control of PRRS. Controlling a virus like PRRS requires a good management strategy that acts on multiple areas of the barn. Before starting management of PRRS it is important to have a diagnostic work-up to confirm it is PRRS, and to characterize the strain.

Feed should be balanced with energy and amino acids, can include some fibre, and be free of mycotoxins. Feeders should be clean and provide enough access for all of the pigs. Water sanitation should be checked yearly, and water access should be unrestricted. Ventilation should be controlled by relative humidity, and adjusted for the season. London Swine Conference (Canada) - 2008 - Au sommaire: Porcine Reproductive and Respiratory Syndrome Virus (PRRSV): The Disease that Keeps Bugging Us. Actes des éditions précédentes. FARMS 19/08/15 North American PRRS Symposium (NA-PRRS)Emerging and Foreign Animal Diseases (Aug 19, 2015) This is the first announcement for the 2015 North American PRRS Symposium. The conference will be held Saturday, December 5 to Sunday, December 6 at the Intercontinental Hotel in downtown Chicago. Even though PRRS remains the focus of the meeting, collaborations with USDA NC-229 and CRWAD have resulted in the expansion of the conference to include emerging and foreign animal diseases, such as porcine epidemic diarrhea (PED), porcine circovirus- associated disease (PCVAD), African swine fever (ASF), classical swine fever (CSF) and other high-consequence diseases of interest to the swine virological community.

Journal of General Virology (1999), 80, 307–315. North American and European porcine reproductive and respiratory syndrome virus. Journal of Swine Health and Production - FEBRUARY 2011 - Au sommaire notamment:Terminology for classifying swine herds by porcin. Le site PRRS Resarch. Le site PRRS.ORG. Le site PORCILIS PRRS. NATIONAL HOG FARMER 01/11/97 PRRS Spreads Worldwide. The more the governments of the world try to control the spread of PRRS (Porcine Reproductive and Respiratory Syndrome), the more the deadly virus seems to spread. Adoption of national and international rules controlling the reporting of disease and the movement, quarantine, and slaughter of affected pigs hasn't stopped PRRS from becoming "the pandemic of the 1990s," reports Cate Dewey, DVM, University of Guelph, Ontario, Canada. PRRS truly has become pandemic in that it has infected pigs across a wide region of the world and in large numbers.

PRRS has spread rapidly around the world by the sale of pigs, semen and airborne spread of the virus, she says. Control measures have done little to stop this spread, other than perhaps decreasing the impact of epidemics. In response, some countries have adopted routine serological testing for lab submissions and/or surveys. Countries voluntarily reporting PRRS disease status have paid the price. PRRS is not a reportable disease in some countries. Szent István University - 2009 - Thèse en ligne : Improvement of the diagnostics of PRRS, assessment of the prevalence, and gene.