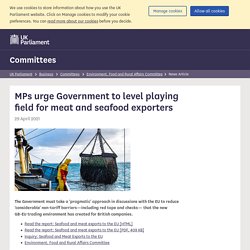 Despite overcoming initial "teething problems" the new barriers small seafood and meat export businesses face could render them unviable, and factories and jobs may relocate to the EU. The Committee's report therefore calls on the Government to ease burdens, including: The Committee criticises the fact that controls on EU seafood and meat imports will not commence until 1 October 2021, with checks at the border only commencing from 1 January 2022. 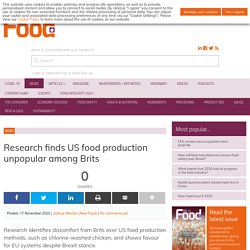 Consumers were not keen on US production methods such as chlorine-washed chicken according to the research New research from the University of Kent, the University of Reading and IHS Markit finds that UK consumers dislike food produced using production methods such as hormones in beef and chlorine washed chicken. The research also reveals that UK consumers highly value food production that adheres to food safety standards set by the EU as well as food made in the UK – a finding which could prove all too relevant in the months to come as the Brexit transition period comes to an end.

These methods of food production are common in the USA but are prohibited under EU food safety regulations. Trade and Agriculture Commission is here to stay The results confirmed that UK consumers dislike food produced using these production methods. NAO_ORG_UK 12/06/19 Ensuring food safety and standards. This report examines the effectiveness of regulations to ensure that food is safe and is what it says it is. 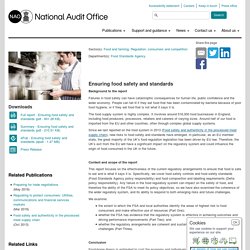 Background to the report Failures in food safety can have catastrophic consequences for human life, public confidence and the wider economy. People can fall ill if they eat food that has been contaminated by bacteria because of poor food hygiene, or if they eat food that is not what it says it is. The food supply system is highly complex. HSE_GOV_UK - Reports produced by the Health and Safety Executive (HSE) - HSE Annual Report 2019/20. Gov_uk 20/05/20 The UK’s approach to the Northern Ireland Protocol. FAS 01/10/20 United Kingdom: Food Service - Hotel Restaurant Institutional. GOV_UK 29/07/20 Developing a National Food Strategy: independent review 2019. FAS USDA 14/07/20 United Kingdom: Retail Foods. Health & Place Volume 63, May 2020, Food safety vulnerability: Neighbourhood determinants of non-compliant establishments in England and Wales. Bailey and Livingston, 2007 N. 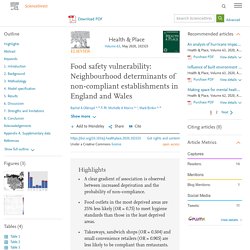 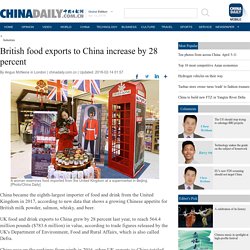 UK food and drink exports to China grew by 28 percent last year, to reach 564.4 million pounds ($783.6 million) in value, according to trade figures released by the UK's Department of Environment, Food and Rural Affairs, which is also called Defra. China rose up the rankings from ninth in 2016, when UK exports to China totaled 439.5 million pounds. The United States is the only country outside the European Union to consume more British food and drink than China.

BRITISH MEAT PROCESSORS ASSOCIATION 01/02/14 Health and Safety Guidance Notes for the Meat Industry. Foods 2018, 7(7), 97; Changes in Fish Consumption Desire and Its Factors: A Comparison between the United Kingdom and Singapore. BMC PUBLIC HEALTH 28/08/18 Pathogen seasonality and links with weather in England and Wales: a big data time series analysis. 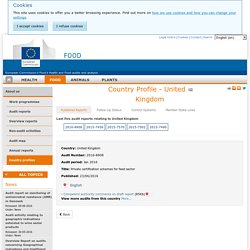 Verification of the completion and effectiveness of corrective actions is an integral part of DG SANTE activity and auditors from it's Directorate F revisits the Member States regularly to monitor progress in relation to the outstanding issues This part of the country profile gives the current status of actions undertaken in response to DG SANTE's recommendations. It is updated at regular intervals, based on assessments made following the most recent missions to the Member State and on any other relevant information received by the Commission from the Member State. 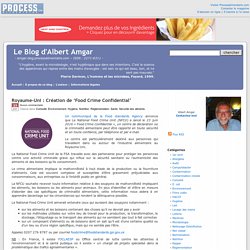 24 March 2015 MPs are concerned that the hollowing out of Defra has left the core Department less effective in persuading decision-makers in other government departments and Brussels to follow its agenda. 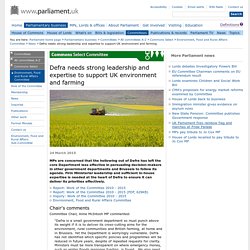 Firm Ministerial leadership and sufficient in-house expertise is needed at the heart of Defra to ensure it can deliver its priorities effectively. Chair's comments Committee Chair, Anne McIntosh MP commented: "Defra is a small government department so must punch above its weight if it is to deliver its cross-cutting aims for the environment, rural communities and British farming, at home and in Brussels. The Environment, Food and Rural Affairs Committee today publishes, Work of the Committee: 2010-15, its review of its scrutiny of Defra over the past five years. KENT ONLINE (UK) 15/01/14 Medway named third worst in the country for food hygiene checks in Which? report. Bosses at Medway Council said huge improvements have been made to make sure businesses are complying with food hygiene regulations. 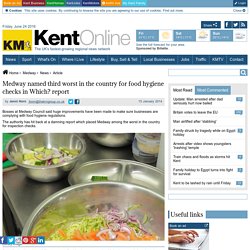 The authority has hit back at a damning report which placed Medway among the worst in the country for inspection checks. Councils that have been failing to ensure food businesses comply with hygiene regulations have been named and shamed by consumer watchdog Which? In a report published this week. The investigation, using data from the Food Standards Agency (FSA), rated 395 local authorities based on the number of inspections it carries out, how many high and medium-risk food premises were not complying with safety rules, the amount of follow-up action taken and the percentage of premises yet to receive a risk rating.

Animal health products play an essential role not only in safeguarding public and animal health but also as a key tool in Europe’s agri-food business. 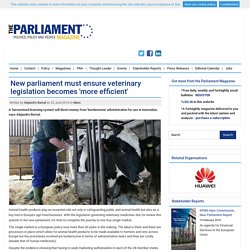 With the legislation governing veterinary medicines due for review this autumn in the new parliament, it’s time to complete the journey to one true single market. The single market is a European policy now more than 30 years in the making. The ideal is there and there are processes in place which allow for animal health products to be made available to farmers and vets across Europe but the procedures involved are burdensome in terms of administrative tasks and they are costly (double that of human medicines). Despite the evidence showing that having to seek marketing authorisation in each of the 28 member states is far from cost-effective, there is a continued lack of harmonisation in the rules governing veterinary medicines. This means that considerable finance is essentially being diverted away from research and development.

HPA - JUIN 2014 - Annual Report and Accounts 2013/14. HPA_ORG_UK - AVRIL 2013 - The history of the Health Protection Agency 2003–2013. Authors: Public Health England Publication date: April 2013 Synopsis To mark the transition of the Health Protection Agency into Public Health England in April 2013, former and current HPA staff gathered together in January 2013 to hold a Witness Seminar. The Seminar, organised in conjunction with the Wellcome Trust, provided staff with an opportunity to record their memories of the Agency and to reflect on its history.

An edited transcript of the Witness Seminar, available to download here, is intended to act as a tribute to the efforts of all those who worked for the Health Protection Agency over the past decade, as a contribution to the wider history of public health in Britain, and as an important legacy document for Public Health England. Availability To order: Available as free download. HPA_ORG_UK - JUILLET 2013 - Health Protection Agency Annual Report and Accounts 2013. BBC 28/11/13 Food outlets will be forced to display hygiene ratings. 28 November 2013Last updated at 07:31 ET The Welsh government scheme rates outlets from zero to five based on how food is prepared, cooked and stored Wales has become the first part of the UK to force food outlets to prominently display food hygiene ratings. The new law, which came into force on Thursday, builds on a voluntary scheme which was introduced three years ago. Over the next 18 months, restaurants, takeaways and supermarkets must display ratings from 0 (lowest) to 5 (highest).