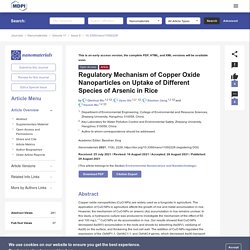 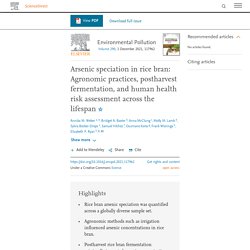 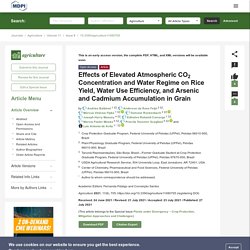 In Southern Brazil, rice is traditionally produced with continuous irrigation, implying a significant amount of water used. LAND DEGRADATION & DEVELOPMENT 01/05/20 A comparative study of arsenic in rice in lowland and terraced paddies in the Red River Basin, Vietnam. Ecotoxicology and Environmental Safety Volume 197, 1 July 2020, Do arsenic levels in rice pose a health risk to the UK population? 1. 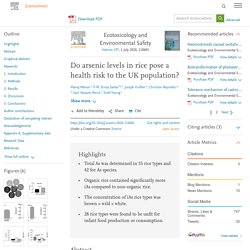 Introduction Geogenic arsenic poses one of the most significant public health challenges, affecting 140 million people across 70 countries in the world (WHO, 2018). In particular, inorganic arsenic (iAs) is a group 1 carcinogen as advised by the International Agency for Research on Cancer (IARC). Also, iAs is included in the list of top 10 chemicals, or group of chemicals, of significant public health concern by the World Health Organisation (WHO 2016). Arsenic exposure affects almost every organ in the human body and produces a range of health effects, including skin lesions, cancer, diabetes and lung diseases (NRC, 2014). Science of The Total Environment Volume 755, Part 2, 10 February 2021, Improved rice cooking approach to maximise arsenic removal while preserving nutrient elements. 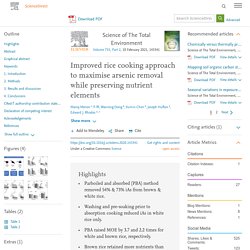 Introduction Rice is consumed by nearly half of the global population, providing 30–70% of energy (Ranum et al., 2014) along with various micro and macronutrients. Science of The Total Environment Volume 743, 15 November 2020, Association of low-level inorganic arsenic exposure from rice with age-standardized mortality risk of cardiovascular disease (CVD) in England and Wales. 1. 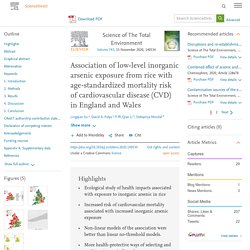 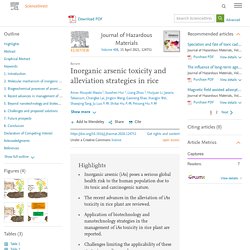 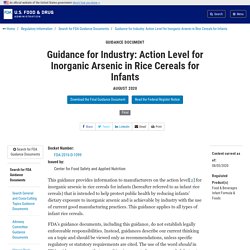 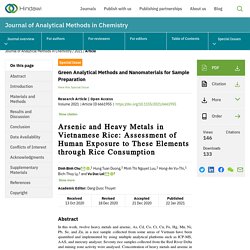 Mercury, a highly toxic element, has been only found in rice samples collected in the mining activity zone (frequency detection 14.5% of total samples). BFR_BUND_DE 22/12/20 Frequently asked questions on arsenic in rice and rice products. Updated BfR FAQ, 22 December 2020 Rice is a food that contains important nutrients, such as protein, vitamins, minerals and fibres. 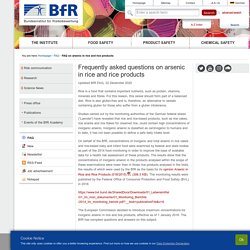 For this reason, this cereal should form part of a balanced diet. Rice is also gluten-free and is, therefore, an alternative to cereals containing gluten for those who suffer from a gluten intolerance. INT. J. ENVIRON. RES. PUBLIC HEALTH 08/01/20 Arsenic Concentrations and Dietary Exposure in Rice-Based Infant Food in Australia. 1. Introduction Arsenic (As), a naturally occurring metalloid, is widely distributed in air, soil and groundwater in both organic and inorganic forms. Current knowledge indicates that organic forms of As have relatively low toxicity, but inorganic As (iAs) is a non-threshold human carcinogen [1].

In South-East Asia (e.g., Bangladesh, West Bengal and Vietnam) where groundwater is a major source of As contamination; it has adversely affected tens of millions of people [2]. In addition to exposure through As-contaminated drinking groundwater, people can also be exposed to As through food ingestion, particularly rice [3,4]. FOOD SAFETY NEWS 05/05/20 Researchers find arsenic in rice risk for UK infants. Scientists have found half of rice varieties they tested exceeded maximum arsenic limits for young children in the United Kingdom. A team at the University of Sheffield’s Institute for Sustainable Food found 28 of 55 rice samples sold in the U.K. contained levels of arsenic that exceeded European Commission regulations for rice for infants or children under the age of five.

The U.K. follows European Commission regulations so that inorganic arsenic concentrations must be below 0.20 milligram per kilogram in white (polished) rice and less than 0.25 mg per kg in brown (unpolished) rice. However, the concentration in rice used for infant food production or direct consumption is set at a maximum of 0.1 mg per kg. Potential risk for infants Results showed brown rice had higher levels of inorganic arsenic than white or wild rice because it contains the bran – the outer layer of the grain. UNI-BEYREUTH-DE 11/02/20 Risk or opportunity for rice cultivation? Bayreuth researchers discover new arsenic compounds in rice fields. University of Bayreuth, Press release No. 016/2020, 11 February 2020 University of Bayreuth researchers, together with scientists from Italy and China, have for the first time systematically investigated under which conditions, and to what extent, sulphur-containing arsenic compounds are formed in rice-growing soils.

To date, these thioarsenates have not been taken into account in assessments of the health effects of rice consumption. In the journal "Nature Geoscience" the scientists present their results and identify the urgent need for research with a view to protecting consumers from health risks. A new measuring method for thioarsenates The research team, headed by the Bayreuth environmental geochemist Prof. Jiajia Wang M.Sc., first author of the publication, during investigations on a rice field trial facility in Italy. Rocz Panstw Zakl Hig 2017;68(4):339-346 EXPOSURE ASSESSMENT OF THE POPULATION IN POLAND TO THE TOXIC EFFECTS OF ARSENIC COMPOUNDS PRESENT IN RICE AND RICE BASED PRODUCTS.

This study is aimed at investigating a suitable method for rice sample preparation as well as validating and applying the method for monitoring the concentration of total arsenic, cadmium, and lead in rice by using Inductively Coupled Plasma Mass Spectrometry (ICP-MS). Various rice sample preparation procedures were evaluated. The analytical method was validated by measuring several parameters including limit of detection (LOD), limit of quantification (LOQ), linearity, relative bias, and repeatability. Regarding the sample preparation, recoveries of spiked samples were within the acceptable range from 89.3 to 98.2% for muffle furnace, 94.2 to 103.3% for heating block, 81.0 to 115.0% for hot plate, and 92.8 to 108.2% for microwave. Validation parameters showed that the method fits for its purpose, being the total arsenic, cadmium, and lead within the Brazilian Legislation limits. 1. 2. 2.1. 2.2. 2.3. 2.3.1. 2.3.2. 2.3.3. 2.3.4. 2.3.5. 2.4. 2.5. 2.6. 3.

ENVIRONMENTAL TOXICOOGY 10/08/17 Environmental behavior, potential phytotoxicity, and accumulation of copper oxide nanoparticles and arsenic in rice plants. Rice has served as an important human food source for more than 8000 yr and has played an essential role in the process of Asian civilization and urbanization 1. Historically, rice has been and continues to be the main food source for half of the world's population, because of its easy transportation and storage and relatively short cooking time 2, 3. Globally, 42% of the 2868 kcal energy consumed daily by the average person comes from cereal crops in which rice is the dominant grain 4. Rice also serves as a mainstay or supplementary food for people on restricted diets.

For example, rice replaces simple carbohydrates, meat, and dairy products for lactose‐intolerant people or for those on a macrobiotic diet because of its low percentage of gluten and a slow and continuous release of glucose into the blood 5. GAO_GOV 16/04/18 Federal Efforts to Manage the Risk of Arsenic in Rice.

ISIS 13/09/04 Rice in Asia: Too Little Iron, Too Much Arsenic. ISIS Report 13/09/04. CHILDREN AND TODDLERS - DEC 2010 - Arsenic In Baby Rice. Weaning a baby onto solid foods is a big step for parents. The press is constantly telling us that the next generation will be fat, they will have a poor understanding of food and that we need to teach children from an early age to eat a large variety of different foods. DAILY STAR 11/12/10 Arsenic threatens rice production.

Saturday, December 11, 2010. PARLEMENT EUROPEEN - Réponse à question E-2763/08 Arsenic dans le riz pour bébé. View Article. Between March and May 2013, three multi-country outbreaks of hepatitis A virus (HAV) infection were reported through the Epidemic Intelligence Information System for Food- and Water-borne diseases (EPIS-FWD) of the European Centre for Disease Prevention and Control (ECDC). The aim of this work is to put these outbreaks into a European Union (EU) and European Economic Area (EEA) perspective and highlight opportunities for improving detection and investigation of such outbreaks. Although HAV outbreaks are not unusual in the EU/EEA, having three large food-borne multi-country outbreaks declared within three months is an unexpected event, particularly when at least two of these outbreaks are associated with frozen berries. Surveillance and early warning for hepatitis A virus infection in the European Union and countries of the European Economic Area Hepatitis A is a self-limiting viral disease caused by hepatitis A virus (HAV).