Diseases 2016, 4(1), 6 Preventive Effects of Cocoa and Cocoa Antioxidants in Colon Cancer. Department of Metabolism and Nutrition, Institute of Food Science and Technology and Nutrition (ICTAN-CSIC), José Antonio Novais 10, Ciudad Universitaria, 28040 Madrid, Spain * Author to whom correspondence should be addressed. 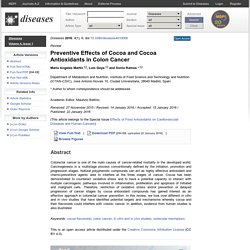 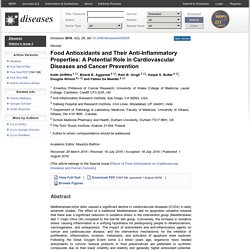 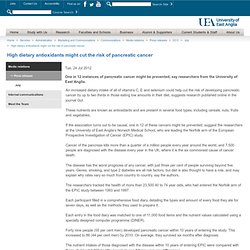 An increased dietary intake of all of vitamins C, E and selenium could help cut the risk of developing pancreatic cancer by up to two thirds in those eating low amounts in their diet, suggests research published online in the journal Gut. These nutrients are known as antioxidants and are present in several food types, including cereals, nuts, fruits and vegetables. If the association turns out to be causal, one in 12 of these cancers might be prevented, suggest the researchers at the University of East Anglia’s Norwich Medical School, who are leading the Norfolk arm of the European Prospective Investigation of Cancer (EPIC) study.

Cancer of the pancreas kills more than a quarter of a million people every year around the world, and 7,500 people are diagnosed with the disease every year in the UK, where it is the six commonest cause of cancer death. Cancer Causes Control. 2013 May;24(5):1005-14. Epub 2013 Feb 19. Dietary intake of vegetables, folate, and antioxidants and the. NATIONAL CANCER INSTITUTE - Antioxidants and Cancer Prevention. Structure and Function of Food Engineering 22/08/12 Au sommaire: Antioxidant, Anticancer Activity, and Other Health Effects of a.