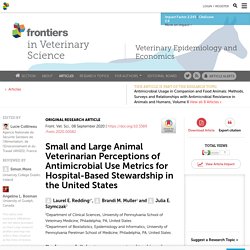 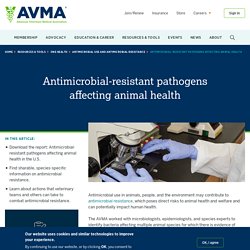 This report includes actions that veterinarians and our teams, producers, breeders, and others seeking medical care for animals can take to collaboratively combat antimicrobial resistance. Only through concerted commitment and action will those caring for the health and welfare of animals succeed in maintaining the effectiveness of antimicrobials against bacterial pathogens. The full report includes an overview of the impact of antimicrobial resistance on animal health in the U.S., report cards that summarize pathogens of concern for different host species, and a technical appendix. 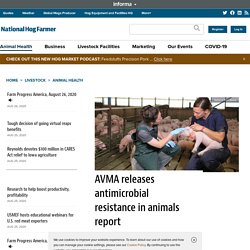 It is the first report describing the current status of antimicrobial-resistant bacteria affecting various animal species in the United States. Antimicrobial resistance – when antimicrobial drugs, including antibiotics, antivirals and others, are no longer effective at treating the bacteria, viruses and other microorganisms that they were developed for – presents a growing challenge for veterinarians and is a global One Health issue. One Health is an approach that recognizes the health of animals, people and the environment is closely connected.

IOWA STATE UNIVERSITY - 2017 - Présentation : Use of antibiotics in livestock production in light of new FDA guidelines. UNIVERSITY OF MINNESOTA via YOUTUBE 27/10/17 Emerging Issues in Antibiotic Resistance Linked to Use in Food Animals. FDA 23/10/17 FDA Releases 2015 NARMS Integrated Report Partnership with CDC and USDA tracks antimicrobial resistance patterns to protect public health. JOHN BLUE via YOUTUBE 16/11/16 Panel - Q&A Stewardship of Antimicrobial Drug Use in Food Animals. GEORGE WASHINGTON UNIVERSITY - AOUT 2017 - U.S. Policy Roadmap To Reduce Use of Antibiotics in Livestock. Medical and public health organizations around the world agree that more prudent use of antibiotics in human medicine and in livestock production is paramount to slow the spread of antibiotic resistance. 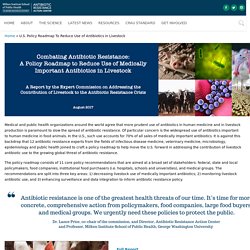 Of particular concern is the widespread use of antibiotics important to human medicine in food animals. In the U.S., such use accounts for 70% of all sales of medically important antibiotics. It is against this backdrop that 12 antibiotic resistance experts from the fields of infectious disease medicine, veterinary medicine, microbiology, epidemiology and public health joined to craft a policy roadmap to help move the U.S. forward in addressing the contribution of livestock antibiotic use to the growing global threat of antibiotic resistance. GEORGE WASHINGTON UNIVERSITY VIA EUREKALERT 29/08/17 Experts release US policy roadmap to reduce antibiotics used in food animals. WASHINGTON, DC (August 29, 2017) -- Antibiotic resistance is a public health crisis that threatens the lives of millions of people around the world. 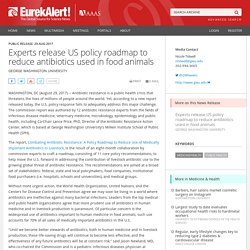 Yet, according to a new report released today, the U.S. policy response fails to adequately address this major challenge. The commission report was authored by 12 antibiotic resistance experts from the fields of infectious disease medicine, veterinary medicine, microbiology, epidemiology and public health, including Co-Chair Lance Price, PhD, Director of the Antibiotic Resistance Action Center, which is based at George Washington University's Milken Institute School of Public Health (SPH). Without more urgent action, the World Health Organization, United Nations, and the Centers for Disease Control and Prevention agree we may soon be living in a world where antibiotics are ineffective against many bacterial infections. 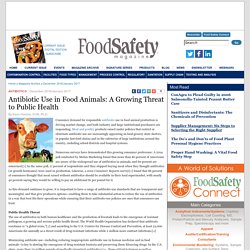 ERS USDA - NOV 2015 - Economics of Antibiotic Use in U.S. Livestock Production. CDDEP - 2010 - Consumption of select key retail antibiotics in the United States and India in 2010. Ever since antibiotics were made widely accessible by mass production in the 1940's, their use has increased significantly each decade.

ERS USDA - NOV 2015 - Restrictions on Antibiotic Use for Production Purposes in U.S. Livestock Industries Likely To Have Small Effects on Prices and Quantities. Highlights: Antibiotics are used widely in livestock production for control, prevention, and treatment of disease, and for “production purposes” such as growth promotion. 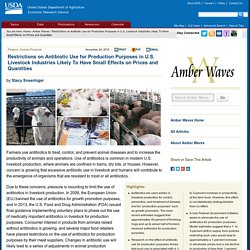 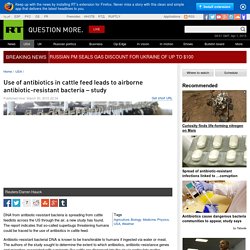 The report indicates that so-called superbugs threatening humans could be traced to the use of antibiotics in cattle feed. Antibiotic-resistant bacterial DNA is known to be transferable to humans if ingested via water or meat. The authors of the study sought to determine the extent to which antibiotics, antibiotic-resistance genes and microbes associated with ruminants like cattle are dispersed into the air via particulate matter derived from large scale beef cattle feedyards, they wrote in their abstract. CHOICES - FEV 2015 - Economics of Antibiotic Use in U.S. Swine and Poultry Production. 1st Quarter 2015. 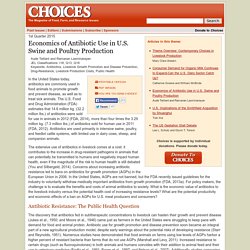 BOVINE VETERINARIAN 22/04/13 FDA warns of misinterpretation of antimicrobial-resistance data. Recently, the Environmental Working Group issued a report of its interpretation of the 2011 Retail Meat Annual Report of the National Antimicrobial Resistance Monitoring System (NARMS). While FDA is always concerned when we see antimicrobial resistance, we believe the EWG report oversimplifies the NARMS data and provides misleading conclusions. We do not believe that EWG fully considered important factors that put these results in context, including: Whether the bacterium is a foodborne pathogen. The report highlights resistance to Enterococcus, but this is not considered a foodborne pathogen. Instead, we include it because its behavior is helpful in understanding how resistance occurs. Additionally, we believe that it is inaccurate and alarmist to define bacteria resistant to one, or even a few, antimicrobials as “superbugs” if these same bacteria are still treatable by other commonly used antibiotics.

FDA 22/04/13 ANIMAL - VETERINARY - FDA Cautions in Interpretation of Antimicrobial Resistance Data. April 22, 2013 Recently, the Environmental Working Group issued a report of its interpretation of the 2011 Retail Meat Annual Report of the National Antimicrobial Resistance Monitoring System (NARMS). While FDA is always concerned when we see antimicrobial resistance, we believe the EWG report oversimplifies the NARMS data and provides misleading conclusions.

CDC 14/07/10 CDC Congressional Testimony - Antibiotic Resistance and the Use of Antibiotics in Animal Agriculture. July, 14, 2010 Testimony on Health; Committee on Energy & Commerce U.S. House of Representatives Good morning Chairman Pallone, Ranking Member Shimkus, and members of the Subcommittee. I am Ali Khan, an Assistant Surgeon General and acting Deputy Director of the National Center for Emerging & Zoonotic Infectious Diseases (proposed), at the Centers for Disease Control & Prevention (CDC). Thank you for the invitation to address the Subcommittee on the available data as it relates to antimicrobial use in food animals. Background. FDA - JUIN 2011 - NARMS Retail Meat Annual Report, 2009. USDA 31/03/15 USDA Awards 36 Food Safety Grants, Including $6.7 Million for Antimicrobial Resistance, to Protect Consumers.

WASHINGTON, March 31, 2015 - The U.S. Department of Agriculture’s (USDA) National Institute of Food and Agriculture (NIFA) today announced funding awards totaling nearly $19 million, including more than $6.7 million for antimicrobial resistance strategies, to 36 grantees to ensure a safe and nutritious food supply and while maintaining American agricultural competitiveness. NIFA made the awards through the Agriculture and Food Research Initiative (AFRI), which is authorized by the 2014 Farm Bill.

“Increasing food safety continues to be a major focus for USDA, as it directly impacts the health and well-being of all Americans,” said Sonny Ramaswamy, NIFA director.