MINISTRY OF ENVIRONMENT AND FOOD OF DENMARK 19/05/16 Danish success to strengthen EU action against resistant bacteria. Each year, more than 25,000 Europeans die from infection due antibiotic-resistant bacteria. 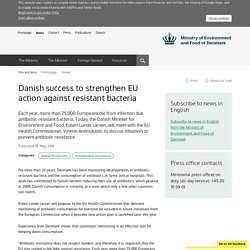 Today, the Danish Minister for Environment and Food, Esben Lunde Larsen, will meet with the EU Health Commissioner, Vytenis Andriukaitis, to discuss initiatives to prevent antibiotic resistance. For more than 20 years, Denmark has been monitoring developments in antibiotic-resistant bacteria and the consumption of antibiotics at farms and at hospitals. This work has contributed to Danish farmers reducing their use of antibiotics, which peaked in 2009. Danish consumption is currently at a level which only a few other countries can match.

Esben Lunde Larsen will propose to the EU Health Commissioner that detailed monitoring of antibiotic consumption for livestock be included in future initiatives from the European Commission when a possible new action plan is launched later this year. Experience from Denmark shows that systematic monitoring is an effective tool for keeping down consumption. Facts. DG SANCO 05/05/16 Audit report : DK Denmark - evaluate the monitoring and reporting of antimicrobial resistance in zoonotic and commensal bacteria in certain food-producing animal populations and food. Cookies This site uses cookies to offer you a better browsing experience. 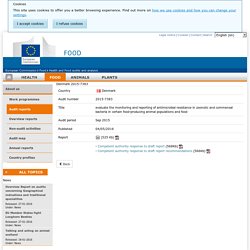 Find out more on how we use cookies and how you can change your settings. European Commission Accessibility tools Service tools Language Navigation path Browse section: All Topics News. FOOD_DTU_DK 08/10/15 Decrease in antimicrobial use in animals in Denmark.

FOOD SAFETY NEWS 10/10/14 Denmark Sees Small Increase in Animal Antibiotic Use. Denmark’s latest numbers on the country’s antimicrobial use and resistance are in. 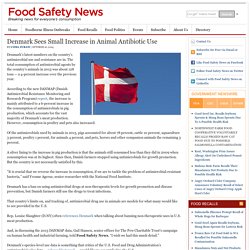 The total consumption of antimicrobial agents by the country’s animals in 2013 was about 128 tons — a 4-percent increase over the previous year. According to the new DANMAP (Danish Antimicrobial Resistance Monitoring and Research Program) report, the increase is mainly attributed to a 6-percent increase in the consumption of antimicrobials in pig production, which accounts for the vast majority of Denmark’s meat production. However, consumption in poultry and pets also increased. Of the antimicrobials used by animals in 2013, pigs accounted for about 78 percent, cattle 10 percent, aquaculture 3 percent, poultry 1 percent, fur animals 4 percent, and pets, horses and other companion animals the remaining 3 percent. Iowa State University - JUNE 2003 - Lessons from the Danish Ban on Feed-Grade Antibiotics.

EHP - JUNE 2014 - Reduced Antibiotic Use in Livestock: How Denmark Tackled Resistance. PREVENTIVE VETERINARY MEDICINE - 2003 - VETSTAT - The Danish system for surveillance of the veterinary use of drugs for producti. 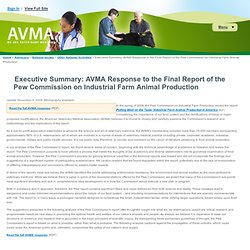 Considering the importance of our food system and the ramifications of minor or major proposed modifications, the American Veterinary Medical Association (AVMA) believes it is crucial to closely and carefully examine the Commission's research and methodology and the implications of the report. As a not-for-profit association established to advance the science and art of veterinary medicine, the AVMA's membership includes more than 78,000 members representing approximately 86% of U.S. veterinarians, all of whom are involved in a myriad of areas of veterinary medical practice including private, corporate, academic, industrial, governmental, military and public health services.

Read the full AVMA response (PDF) ANIMAL HEALTH INSTITUTE - The Antibiotic Ban in Denmark: A Case Study on Politically Driven Bans. In the 1990s, the European Union made a political decision to phase out the use of antibiotics as growth promoters (AGPs). 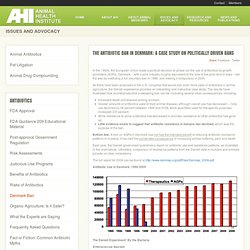 Denmark – with a pork industry roughly equivalent to the size of the pork herd in Iowa – led the way by instituting a full voluntary ban in 1998, and making it compulsory in 2000. As there have been proposals in the U.S. Congress that would ban even more uses of antibiotics in animal agriculture, the Danish experience provides an interesting and instructive case study. The results have illustrated how counterproductive a sweeping ban can be, including several clear consequences, including:

In June of 2003, McDonald's Corporation announced that it would prohibit its direct suppliers from using antibiotics that are important in human medicine as growth promotants in food animals after 2004. 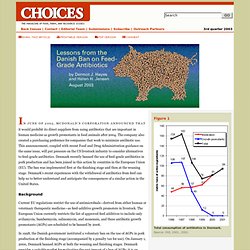 The company also created a purchasing preference for companies that work to minimize antibiotic use. This announcement, coupled with recent Food and Drug Administration guidance on the same issue, will put pressure on the US livestock industry to consider alternatives to feed-grade antibiotics. FOOD PRODUCTION 05/05/03 Danish ban on antibiotics proves successful. The complete ban on the use of antibiotics as growth promoters on Danish farms has not led to increases in food-poisoning bacteria as some feared. 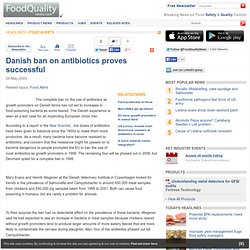 The Danish experience is seen as a test case for an impending European Union ban. According to a report in the New Scientist , low doses of antibiotics have been given to livestock since the 1950s to make them more productive. As a result, many bacteria have become resistant to antibiotics, and concern that this resistance might be passed on to bacteria dangerous to people prompted the EU to ban the use of most antibiotics as growth promoters in 1999. WHO reports that withdrawing antimicrobial growth promoters in animals in Denmark has reduced threat of antimicrobial resistance. 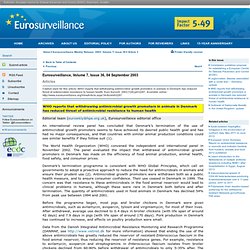 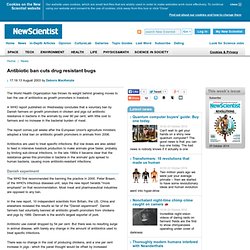 A WHO report published on Wednesday concludes that a voluntary ban by Danish farmers on growth promoters in chicken and pigs cut antibiotic resistance in bacteria in the animals by over 90 per cent, with little cost to farmers and no increase in the bacterial burden of meat. The report comes just weeks after the European Union's agriculture ministers adopted a total ban on antibiotic growth promoters in animals from 2006. Antibiotics are used to treat specific infections. But low doses are also added to feed in intensive livestock production to make animals grow faster, probably by limiting sub-clinical infections. PIGSITE 12/02/10 New Funding for Research into Antibiotic Resistance. News New Funding for Research into Antibiotic Resistance 12 February 2010 DENMARK - The Ministry of Food, Agriculture and Fisheries has started two new research projects aimed at contributing to the fight against resistance to antibiotics in animals and humans. 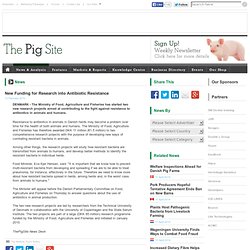