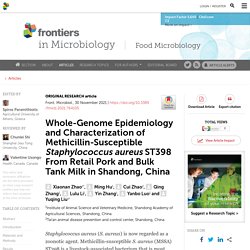 Swine farming as a source of methicillin-resistant Staphylococcus aureus (MRSA) has been well documented. 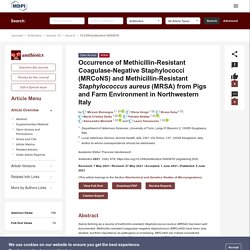 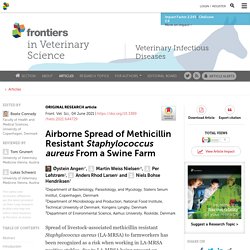 The mode of transmission has been of great concern in several European countries, especially those with a low MRSA incidence in humans and large pig productions. In Denmark, the proportion of LA-MRSA positive swine herds has increased dramatically since the first findings in 2008, reaching 95% in 2019 (4) and at the same time a steep increase in human LA-MRSA cases has been observed. This was primarily in persons with direct contact to swine farms; e.g., farm workers and family members. ANTIBIOTICS 02/05/21 Pilot Study on Alteration of LA-MRSA Status of Pigs during Fattening Period on Straw Bedding by Two Types of Cleaning. In countries with professional pig husbandry in stables, the prevalence of livestock-associated (LA) methicillin-resistant Staphylococcus aureus (MRSA) on farms has remained high or has further increased in recent years. 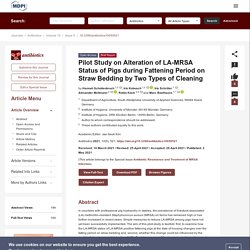 Simple measures to reduce LA-MRSA among pigs have not yet been successfully implemented. The aim of this pilot study is twofold: first, to examine how the LA-MRSA status of LA-MRSA positive fattening pigs at the date of housing changes over the fatting period on straw bedding and, second, whether this change could be influenced by the quality of cleaning and disinfection (C&D). For this purpose, 122 animals are individually tested for LA-MRSA carriage at five sequential time points comparing pigs housed on a farm using straw bedding plus C&D (n = 59) vs. straw bedding plus simple cleaning (n = 63). ANTIBIOTICS 16/04/21 Occurrence and Survival of Livestock-Associated MRSA in Pig Manure and on Agriculture Fields. Livestock-associated methicillin-resistant Staphylococcus aureus (LA-MRSA) is widespread in European pig production, and an increasing number of humans attract infections with this bacterium. 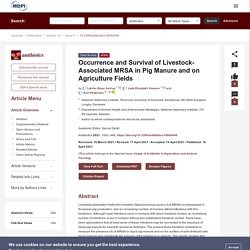 Although most infections occur in humans with direct livestock contact, an increasing number of infections occur in humans without any established livestock contact. There have been speculations that at least some of these infections may be connected to the exposure of liquid pig manure for example spread as fertilizers. The present study therefore undertook to measure the presence of LA-MRSA in liquid pig manure and on the surface of soils fertilized with liquid manure and investigate the survival of the bacterium in manure. The results showed that LA-MRSA could be detected in 7 out of 20 liquid manure samples and in 12 out of 186 soil samples. ►▼ Show Figures. PATHOGENS 08/03/21 Staphylococcus aureus in Intensive Pig Production in South Africa: Antibiotic Resistance, Virulence Determinants and Clonality. Although Staphylococcus aureus is a major threat to the veterinary, agricultural, and public health sectors because of its zoonotic potential, studies on its molecular characterisation in intensive animal production are rare. 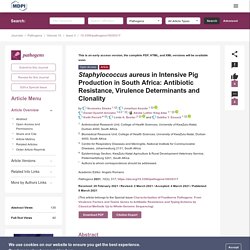 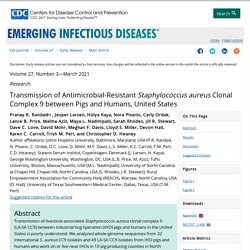 Any changes will be reflected in the online version in the month the article is officially released. Author affiliations: Johns Hopkins University, Baltimore, Maryland, USA (P.R. Randad, N. Pisanic, C. BMC VETERINARY RESEARCH 18/01/21 The presence of antibiotic-resistant Staphylococcus spp. and Escherichia coli in smallholder pig farms in Uganda. Study design The study was conducted in the four sub-counties closest to Lira town, Lira district, in the northern region of Uganda. 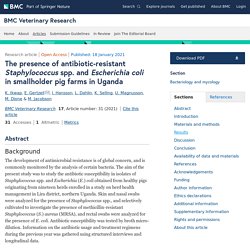 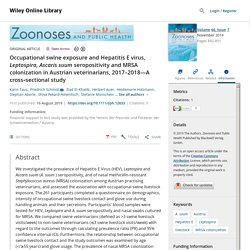 Domestic swine and wild boars are the main animal reservoir for HEV gt3 and gt4 (Lewis, Wichmann, & Duizer, 2010). Berto et al. (2012) found in commercial swine farms in six European countries, other than Austria, a faecal HEV prevalence in growers of 20%–44% and in fatteners of 8%–73%. Ann. Occup. Hyg. 04/01/13 Concentration of Airborne Staphylococcus aureus (MRSA and MSSA), Total Bacteria, and Endotoxins in Pig Farms. NATIONAL FOOD INSTITUTE (DK) 05/08/14 New methods to identify MRSA in pigs. It is important to keep the number of MRSA infections at a low level. 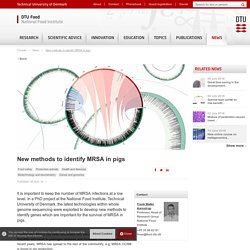 In a PhD project at the National Food Institute, Technical University of Denmark, the latest technologies within whole genome sequencing were exploited to develop new methods to identify genes which are important for the survival of MRSA in pigs. Traditionally, MRSA has been associated with severe infections which occur in hospitals and result in prolonged diseases and increased mortality. However, in recent years, MRSA has spread to the rest of the community, e.g. MRSA CC398 is found in pig production. MRSA is resistant to the antibiotics we normally use for treatment of Staphylococcus infections. In her PhD project at the National Food Institute, PhD student Mette Theilgaard exploited the latest technologies within whole genome sequencing and studied the entire DNA of MRSA CC398. UNIVERSITY OF MINNESOTA - NOV 2013 - Pigs and MRSA: What are the human health risks and to whom?

The Veterinary Journal Available online 13 January 2015 Antimicrobial resistance and population structure of Staphylococcus epidermidis recovered from pig farms in Belgium. JavaScript is disabled on your browser. Please enable JavaScript to use all the features on this page. Highlights. PLOS 02/05/18 Emergence of highly prevalent CA-MRSA ST93 as an occupational risk in people working on a pig farm in Australia. Abstract Background The occurrence of livestock-associated (LA) MRSA (ST398) in pig herds has emerged as a threat to occupational safety in many parts of the world. Journal of Antimicrobial Chemotherapy, Volume 71, Issue 11, 1 November 2016 Molecular basis of rifampicin resistance in multiresistant porcine livestock-associated MRSA.