Clinical observations Body temperature The baseline average temperature for the animals before the trial was 38.4 °C. 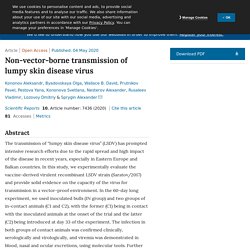 All animals infected with LSDV at the outset of the trial (group IN) had fevers up to 40.7 °C (range 39.0 °C to 40.7 °C) on p.i. day 3, indicating virus replication and circulation. By day 8 p.i., the body temperatures of all the inoculated bulls rose above 39.6 °C and their temperatures remained high until p.i. day 20, and thereafter moderate declines were measured to within the range of 38.1 to 39.6 °C in most of the infected animals up to around day 40 p.i. – thereafter a second bout of fever (bi-phasic) was measured in most of the group (except for NI-8) with temperatures rising to a high of 41.5 °C (IN-2) on day 41 p.i., tailoring off to close to normal levels from day 48 p.i. 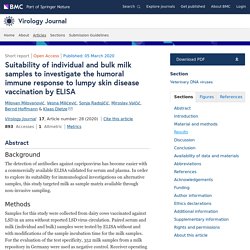 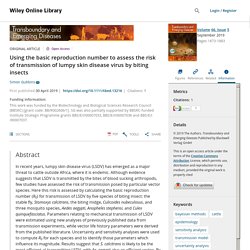 Historically, LSD outbreaks have largely been confined to Africa (EFSA Panel on Animal Health & Welfare, 2015), where the disease contributes to rural poverty and food insecurity (Molla, de Jong, Gari, & Frankena, 2017; Tuppurainen & Oura, 2012). In recent years, however, LSDV has emerged as a major threat to cattle outside of Africa. In 2012 it spread to the Middle East, through Israel and the Lebanon, reaching Turkey in 2013 (Alkhamis & VanderWaal, 2016). In 2015, the first cases of LSD were reported in Greece (Tasioudi et al., 2016) and the virus subsequently spread to much of the Balkans (Mercier et al., 2018). Evidence from the field and from experiments indicates that transmission of LSDV by most direct and indirect routes is inefficient (Carn & Kitching, 1995; Weiss, 1968). 2.1 Basic reproduction number for LSDV. TRANSBOUNDARY AND EMERGING DISEASES 25/05/19 Mapping changes in the spatiotemporal distribution of lumpy skin disease virus.

Lumpy skin disease virus (LSDV) is an infectious disease of cattle transmitted by arthropod vectors which results in substantial economic losses due to impact on production efficiency and profitability, and represents an emerging threat to international trade of livestock products and live animals. 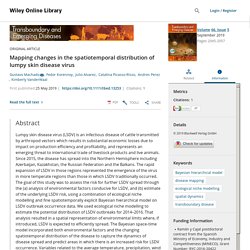 Since 2015, the disease has spread into the Northern Hemisphere including Azerbaijan, Kazakhstan, the Russian Federation and the Balkans. The rapid expansion of LSDV in those regions represented the emergence of the virus in more temperate regions than those in which LSDV traditionally occurred. The goal of this study was to assess the risk for further LSDV spread through the (a) analysis of environmental factors conducive for LSDV, and (b) estimate of the underlying LSDV risk, using a combination of ecological niche modelling and fine spatiotemporally explicit Bayesian hierarchical model on LSDV outbreak occurrence data. 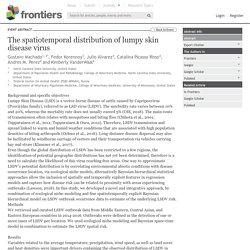 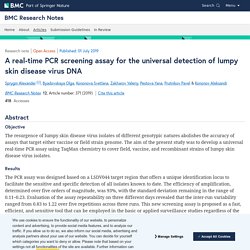 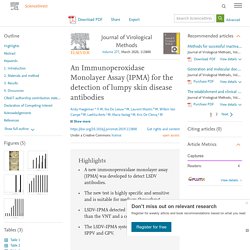 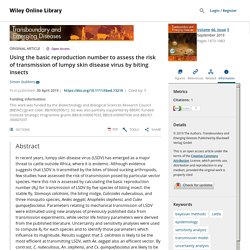 Historically, LSD outbreaks have largely been confined to Africa (EFSA Panel on Animal Health & Welfare, 2015), where the disease contributes to rural poverty and food insecurity (Molla, de Jong, Gari, & Frankena, 2017; Tuppurainen & Oura, 2012). In recent years, however, LSDV has emerged as a major threat to cattle outside of Africa.

In 2012 it spread to the Middle East, through Israel and the Lebanon, reaching Turkey in 2013 (Alkhamis & VanderWaal, 2016). In 2015, the first cases of LSD were reported in Greece (Tasioudi et al., 2016) and the virus subsequently spread to much of the Balkans (Mercier et al., 2018). Evidence from the field and from experiments indicates that transmission of LSDV by most direct and indirect routes is inefficient (Carn & Kitching, 1995; Weiss, 1968). BMC VETERINARY RESEARCH 08/07/19 Seroprevalence and risk factors for lumpy skin disease virus seropositivity in cattle in Uganda. EUREKALERT 29/05/19 Model identifies high-risk areas for lumpy skin disease in cattle. Researchers have combined two separate computer models to identify areas at highest risk for outbreaks of lumpy skin disease virus (LSDV) in cattle. 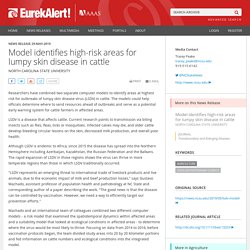 The models could help officials determine where to send resources ahead of outbreaks and serve as a potential early warning system for cattle farmers in affected areas. LSDV is a disease that affects cattle. Current research points to transmission via biting insects such as flies, fleas, ticks or mosquitoes. Infected calves may die, and older cattle develop bleeding circular lesions on the skin, decreased milk production, and overall poor health. Although LSDV is endemic to Africa, since 2015 the disease has spread into the Northern Hemisphere including Azerbaijan, Kazakhstan, the Russian Federation and the Balkans. The model identified elevated risk areas in Russia, Turkey, Serbia and Bulgaria. Although LSDV hasn't yet been reported in the U.S., Machado says his model could easily be used to predict high-risk areas if an outbreak occurs. 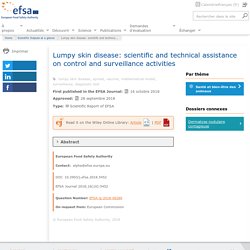 By using a spread epidemiological model, assuming a vaccination effectiveness of 65%, with 50% and 90% coverage, 3 and 4 years campaigns, respectively, are needed to eliminate LSD. When vaccination effectiveness is 80% to 95%, 2 years of vaccination at coverage of 90% is sufﬁcient to eliminate LSD virus (LSDV). For shorter campaigns, LSD is predicted to persist. When the infection is eliminated by vaccination, two pathways for disease recurrence are possible, (i) by new introduction from a neighbouring affected area, especially by introduction of infected animals, or, less likely (ii) the infection persisting either in the environment, in vectors or in wild animals. FAO has published a new manual, which is part of the FAO animal production and health series: Lumpy skin disease - A field manual for veterinarians. This manual is aimed to those in the first line of defence, i.e. those working in the field, who are most likely to encounter this vector-borne, viral disease that afflicts cattle.

The manual provides veterinary professionals and paraprofessionals (in the field and in slaughterhouses) and laboratory diagnosticians with the information they need to promptly diagnose and respond to an outbreak of lumpy skin disease (LSD). Cattle farmers will also benefit from reading it. Characterized by nodules on the skin, LSD is primarily transmitted by mosquitoes, other hematophagous insects, and flies.

Outbreaks of lumpy skin disease (LSD) in the Balkan region fell dramatically by 95% from 7,483 in 2016 to 385 in 2017. The figures confirm that vaccination of cattle – recommended by EFSA in 2016 – is the most effective way to contain the disease. A report published today by EFSA gives an update on the occurrence of LSD and the effectiveness of vaccination. It also analyses the risk factors for its spread in south-eastern Europe. The report is based on data collected by affected countries and those at risk. However, Alessandro Broglia, a veterinarian at EFSA, warned: “Even if the number of outbreaks has decreased significantly, the disease has not been eliminated from the region yet and therefore we need to remain vigilant.”

In 2017 most of the outbreaks – 379 – were reported in areas of Albania where the vaccination programme had not yet been completed. Working together The cooperation and commitment of countries involved in the data collection was crucial for the report. Veterinary Research 2012 43:1 Mathematical modelling and evaluation of the different routes of transmission of lumpy skin disease virus.

The results of this study indicate that in the outbreak described, transmission of LSDV by direct contact had only a minor effect on virus spread. These findings were found to be very robust to various assumptions regarding mean and standard deviation of incubation period and regarding the existence of subclinical infection.

FAO - 2017 - EMPRES-Animal health 360. No. 47/2017: Special edition on Lumpy Skin Disease. DG SANCO 18/07/17 Rapports OAV : MK Macedonia, The former Yugoslav Republic of - Lumpy skin disease - animal health controls. Cookies This site uses cookies to offer you a better browsing experience. Find out more on how we use cookies and how you can change your settings. European Commission Accessibility tools Service tools Language Navigation path. Trop Anim Health Prod. 2017 Mar;49(3):509-514. Temporal and spatial distribution of lumpy skin disease (LSD) outbreaks in Mashonaland West Province of Zimbabwe from 2000 to 2013. THE PIRBRIGHT INSTITUTE 03/07/17 News feature: the emergence of lumpy skin disease in Europe. Lumpy skin disease (LSD) is an important disease of cattle which was first seen in southern Africa in the 1920s. It is now found throughout Africa, and more recently has spread into the Middle East.

In 2015 the disease entered Europe for the first time, resulting in the slaughter of thousands of cattle in Greece and neighbouring countries. Dr. Pip Beard from The Pirbright Institute is a leading expert on LSD and here she answers questions about the disease and the latest research, and explains the role Pirbright is playing to help combat its spread. PARLEMENT EUROPEEN - Réponse à question E-003316-17 Lumpy skin disease.

FAO 25/07/16 Report of FAO Ad Hoc Group Meeting on Lumpy Skin Disease. FAO - MARS 2017 - Présentations : Regional workshop on lumpy skin disease (LSD) prevention and control strategies. The FAO Regional Office for Europe and Central Asia has invited representatives from select national veterinary services to attend the Regional workshop on lumpy skin disease (LSD) prevention, control, and awareness raising, for the Balkans, Caucasus, and Eastern European regions. The workshop will take place at the Ministry of Agriculture in Budapest, Hungary on 7-9 March 2017, and is jointly organised through a combination of funds from the technical cooperation programme and a donation by the Hungarian Government.

Open Access Abstract. EFSA 13/01/15 Scientific Opinion on lumpy skin disease. Following a request from the European Commission, the EFSA Panel on Animal Health and Welfare (AHAW Panel) was asked to deliver a scientific opinion on lumpy skin disease (LSD), in order to provide an update on the characterisation of the disease; to assess the risk of introduction into the European Union (EU) and the speed of spread, the risk of becoming endemic and its impact; and to determine if further measures are justified. This request is linked to the recent and important spread of LSD throughout the Middle East, including Turkey, where it is now considered endemic.

Regarding disease characterisation, the AHAW Panel reported that LSD is characterised by significant losses, especially in naive and young animals, due to chronic debility, reduced milk production and weight, infertility, abortion and death, but it is not a zoonosis. LSD is endemic in most African countries. FOCUS 20/08/15 Bulgaria authorities stepping up preventive measures against lumpy skin disease. Home | Services | Archive | Partners | Banners | Radio Adds | About Us | Disclaimer | Contacts | © 2016 FOCUS Information Agency The content published by Focus Information Agency and the technologies, used on its website, are protected by the Copyright and Neighbouring Rights Act.

All the text, audio and video materials, photos, and graphics, published in the database, are property of Focus Information Agency, unless otherwise provided. The USERS and SUBSCRIBERS are under the obligation to use the materials from the database according to Focus Information Agency’s General Terms and Conditions as well as the applicable law of the Republic of Bulgaria. Ticks and Tick-borne Diseases Volume 4, Issue 4, June 2013, Pages 329–333 Evidence of vertical transmission of lumpy skin diseas.