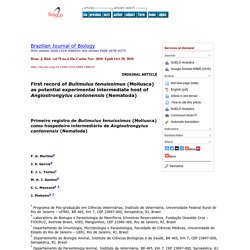 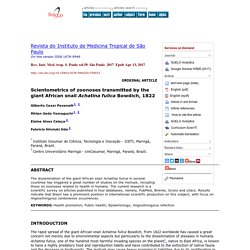 The dissemination of the giant African snail Achatina fulica in several countries has triggered a great number of studies on the mollusk, including those on zoonoses related to health in humans. KEYWORDS: Health promotion; Public health; Epidemiology; Angiostrongylus infection The rapid spread of the giant African snail Achatina fulica Bowdich, from 1822 worldwide has caused a great concern not merely due to environmental aspects but particularly to the dissemination of diseases in humans. Scientometrics have foregrounded current methodology for the planning, collection and analysis of data. Am. J. Trop. Med. Hyg., 68(3), 2003, pp. 281–285  EOSINOPHILIC MENINGITIS CAUSED BY ANGIOSTRONGYLUS CANTONENSIS ASSOCIATED WITH EATING RAW SNAILS: CORRELATION OF BRAIN MAGNETIC RESONANCE IMAGING SCANS WITH CLINICAL FINDINGS. REV. BIOL. TROP. - 1976 - Observations on the role of mollusks and planarians in the transmission of Angiostrongylus cantonensis infection to man in new caledonia. 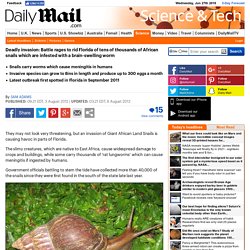 The slimy creatures, which are native to East Africa, cause widespread damage to crops and buildings, while some carry thousands of 'rat lungworms' which can cause meningitis if ingested by humans. Government officials battling to stem the tide have collected more than 40,000 of the snails since they were first found in the south of the state late last year. Parasitic Rat lungworms use the snails as hosts. BBC 02/08/12 African snail: Deadly invasion in South America. 2 August 2012Last updated at 19:31 ET By William Kremer BBC News An African snail appears to be on a campaign to conquer central and southern America. 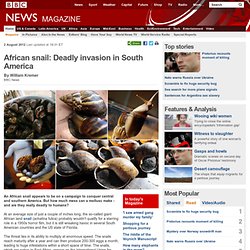 But how much mess can a mollusc make - and are they really deadly to humans? At an average size of just a couple of inches long, the so-called giant African land snail (achatina fulica) probably wouldn't qualify for a starring role in a 1950s horror film, but it is still wreaking havoc in several South American countries and the US state of Florida. The threat lies in its ability to multiply at enormous speed. The snails reach maturity after a year and can then produce 200-300 eggs a month, leading to huge infestations within a short space of time.