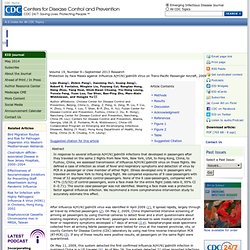 Protecting People.™ <div class="noscript"> Note: Javascript is disabled or is not supported by your browser. Emerging Infectious Disease ISSN: 1080-6059 Volume 19, Number 9—September 2013. INFLUENZA RESEARCH AND TREATMENT - 2011 - Comparison of Human-Like H1 (-Cluster) Influenza A Viruses in the Swine Host, PLOS 05/03/13 Using Routine Surveillance Data to Estimate the Epidemic Potential of Emerging Zoonoses: Application to the Emerge. Prior to emergence in human populations, zoonoses such as SARS cause occasional infections in human populations exposed to reservoir species. The risk of widespread epidemics in humans can be assessed by monitoring the reproduction number (average number of persons infected by a human case). However, until now, estimating required detailed outbreak investigations of human clusters, for which resources and expertise are not always available.

Additionally, existing methods do not correct for important selection and under-ascertainment biases. Here, we present simple estimation methods that overcome many of these limitations. Our approach is based on a parsimonious mathematical model of disease transmission and only requires data collected through routine surveillance and standard case investigations. We have developed a simple approach with limited data requirements that enables robust assessment of the risks posed by emerging zoonoses. J.S. . © 2013 Cauchemez et al. Veterinary Microbiology 74 (2000) 29±46 The epidemiology and evolution of in¯uenza viruses in pigs. CDC EID – OCT 2011 - Oseltamivir-Resistant Pandemic (H1N1) 2009 Virus Infection in England and Scotland, 2009–2010

Articles NEJM. Issue 3 Au sommaire:Emergence of novel influenza A/H. ANTIMICROBIAL AGENTS AND CHEMOTHERAPY, Feb. 2005, p. 556–559 Generation and Characterization of Recombinant Influenza A (H1N1) Volume 151 Issue 1 Lessons From Outbreaks of H1N1 Influenza. Virology Journal 2009, 6:69 Protein intrinsic disorder and influenza virulence: the 1918 H1N1 and H5N1 viruses. Virology Journal 2009, 6:51 Towards a sane and rational approach to management of Influenza H1N1 2009. Tenor of the Response to Influenza H1N1 2009 Actions concerning Flu H1N1 2009 need to be based on fact and science, following recommendations of public health officials, and not fueled by political, legal or media interests and hysteria. 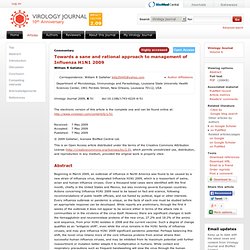 This is time for calm, thoughtful action, and not the panic we have seen spread around the globe inspired by media reports. When 10 schools or an entire school district are closed due to one suspected case of influenza, we might well ask if our response has been measured and appropriate. The good faith of the public is a precious commodity.

When one day a pandemic is trumpeted, and the next day the outbreak is called no more than normal flu and under control, and then a call goes out for a multibillion dollar vaccine program to defend against a major pandemic, one risks the public feeling whiplash and the credibility of public officials being damaged. UNICEF DEC 2007 Troisième rapport de progrès global: réponses à la grippe aviaire et état de la préparation pandémique, décembr. Kansas State University Scientists Shed Light on Myths Surrounding H1N1 Virus. Journal of Biology 2009, 8:45 Influenza: one or two more questions. When we asked Peter Doherty to write a question-and-answer piece on influenza [1], Australia, where he is based, had one reported case of influenza A (H1N1).

At the time of writing this editorial, Australia has more than 1,200 cases (though to date no deaths) and has triggered the announcement by WHO of a global pandemic. Received wisdom has it that pathogens are not generally lethal to the hosts they normally infect, because they could not survive if they were. Pathogenicity thus becomes adapted to a level at which the host survives to become reinfected (or to produce young that become infected).

The most notable example of such adaptation is in the herpesviruses, which have evolved a quite extraordinary repertoire of devices for avoiding human immunity and with which most human adults in the Western world are chronically infected. Herpesviruses persist through latency. An adjuvant, in immunology, is a substance that increases the strength of an adaptive immune response. Journal of Infection in Developing Countries Vol 3, No 03: April 2009 Macrolides for the treatment of severe respiratory illness. Emerging Problems in Infectious Diseases 1National Centre of Influenza, Valladolid, Spain 2University of Health Network Toronto/ International Institute of Infection and Immunity, Shantou Medical School, China 3Hospital Clínico Universitario de Valladolid-IECSCYL, Microbiology Service, Infection and Immunity Division.

Following testing in Denmark, resistance was also confirmed by the WHO Collaborating Centre at the Medical Research Council (MRC) National Institute for Medical Research (NIMR) in the UK. The virus remained susceptible to the antiviral zanamivir. Professor Maria Zambon, Director of the Health Protection Agency's Centre for Infections and Head of the UK WHO National Influenza Centre, said: "We have been monitoring antiviral drug resistance since the beginning of this outbreak. "HPA continues to watch for antiviral resistance and will be carrying out regular sample testing throughout this outbreak. " General infection control practices and good respiratory hand hygiene can help to reduce transmission of all viruses, including swine flu.

In making their modeling projections, the group used surveillance data from Mexico, focusing on La Gloria, Veracruz, where the outbreak is believed to have started in mid February, sickening over half of the village's population. The research team published its findings in an early online edition of Science.

"Our early analysis would suggest that this is going to be an outbreak comparable to that of 20th century pandemics regarding the extent of its spread—it's very difficult to quantify the human health impact at this stage, however," said senior author Neil Ferguson of Imperial College London in a statement released by Science. Fraser C, Connelly CA, Cauchemez S, et al. Arch Virol (2009) 154:1883–1890 Genetic stability and linkage analysis of the 2009 influenza A(H1N1) virus based on sequence hom.