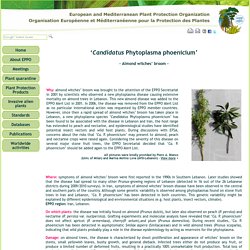 Later studies showed that the disease had spread to many other Prunus-growing regions of Lebanon (detected in 16 out of the 26 Lebanese districts during 2009/2010 surveys). In Iran, symptoms of almond witches’ broom disease have been observed in the central and southern parts of the country. Although some genetic variability is observed among phytoplasmas found on stone fruit trees in Iran and Lebanon, ‘Ca. P. phoenicium’ has been detected in both countries. On which plants: the disease was initially found on almond (Prunus dulcis), but later also observed on peach (P. persica) and nectarine (P. persica var. nucipersica). 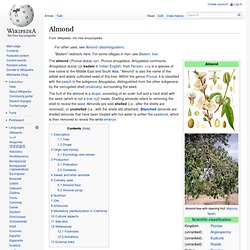 Trees reach full bearing five to six years after planting. The fruit matures in the autumn, 7–8 months after flowering.[3][4] Drupe[edit] 'Fitas' almonds from Ibiza Unshelled (left) and shelled (right) almonds Origin and history[edit] The almond is native to the Mediterranean climate region of the Middle East, eastward as far as the Indus.[6] In India, it is known as badam. 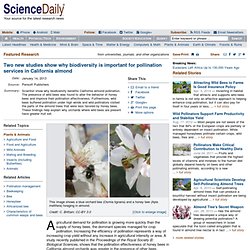 Increasing the efficiency of pollination represents a way of increasing crop yield without any increase in agricultural intensity or area. A study recently published in the Proceedings of the Royal Society B: Biological Sciences, shows that the pollination effectiveness of honey bees in California almond orchards was greater in the presence of other bees. Almond is a crop highly dependent on honey bee pollination and is a $3 billion industry in California. The study by researchers in Germany at Leuphana University of Lüneburg and California at UC Berkeley and Davis found that where other species of bees were present, honey bee behaviour changed and their pollination effectiveness was greater than in orchards where other bees were absent.

Furthermore, orchards with wild bees had a greater proportion fruit set. USDA TODAY 16/02/13 Fewer bees a threat to world's almond supply. TURLOCK, California (AP) — In an almond orchard in California's Central Valley, bee inspector Neil Trent pried open a buzzing hive and pulled out a frame to see if it was at least two-thirds covered with bees. 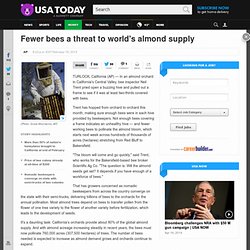 Trent has hopped from orchard to orchard this month, making sure enough bees were in each hive provided by beekeepers. Not enough bees covering a frame indicates an unhealthy hive — and fewer working bees to pollinate the almond bloom, which starts next week across hundreds of thousands of acres (hectares) stretching from Red Bluff to Bakersfield. "The bloom will come and go quickly," said Trent, who works for the Bakersfield-based bee broker Scientific Ag Co. "The question is: Will the almond seeds get set? It depends if you have enough of a workforce of bees. " That has growers concerned as nomadic beekeepers from across the country converge on the state with their semi-trucks, delivering billions of bees to the orchards for the annual pollination. 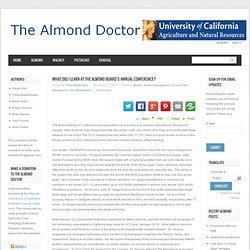 The 2012 meeting was last week (Dec 11-13). Here is a quick review of some of the things I picked up from researchers and informed industry members at that meeting… Joel Siegel, USDA ARS entomology researcher, discussed results from his work into navel orangeworm (NOW) control in almonds. He again stressed the “numbers game” reality of controlling this pest. High levels of overwintering NOW mean the season starts with a higher population that can build rapidly once hull split begins and new crop nuts are targeted by female NOW laying eggs. 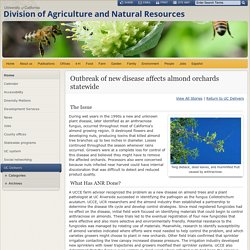 During wet years in the 1990s a new and unknown plant disease, later identified as an anthracnose fungus, occurred throughout most of California's almond growing region. It destroyed flowers and developing nuts, producing toxins that killed almond tree branches up to two inches in diameter. Losses continued throughout the season whenever rains occurred. Growers were at a complete loss for control of this disease and believed they might have to remove the affected orchards. What Has ANR Done? A UCCE farm advisor recognized the problem as a new disease on almond trees and a plant pathologist at UC Riverside succeeded in identifying the pathogen as the fungus Colletotrichum acutatum. The Payoff Identifying the disease, developing controls led to successful disease management.. Contact Supporting Unit: Dr. FARM BIOSECURITY (AU) - NOV 2012 - Orchard biosecurity manual for the almond industry. Plant Disease - July 2012 - Management of Almond Leaf Scorch Disease: Long-Term Data on Yield, Tree Vitality, and Disease Progre.

WESTERN FARM PRESS 27/05/13 40 years in almond pest management – a retrospective. A highly refined integrated mite management program was developed with funding from the Almond Board in 1984. 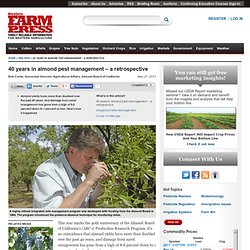 The program introduced the presence-absence technique for monitoring mites. This year marks the 40th anniversary of the Almond Board of California’s (ABC’s) Production Research Program. It’s no coincidence that almond yields have more than doubled over the past 40 years, and damage from navel orangeworm has gone from a high of 8.8 percent down to 1 percent or less in the most recent crop.

Here’s how it happened. In 1972, the Federal Marketing Order for almonds was revised so that the ABC could establish and fund production research projects. NOW – The First Milestone Cooperative research with UC and USDA resulted in a “Four Point Program” for addressing navel orangeworm, which is the foundation of practices used today that have brought damage down to a new low, reducing direct crop losses and associated aflatoxin risk. 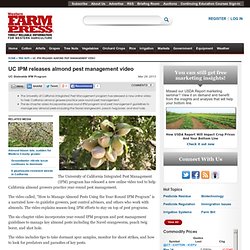 The video includes tips to take dormant spur samples, monitor for shoot strikes, and how to look for predators and parasites of key pests. Instructions are included on using treatment tables to choose pesticides which are effective while examining the impact on honey bees, natural enemies, and the environment. Amandier. Un article de Wikipédia, l'encyclopédie libre. 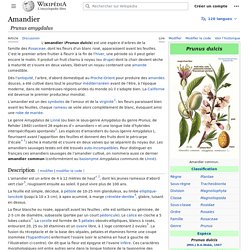 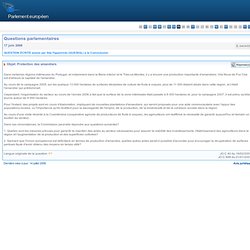