SOUTH AFRICAN JOURNAL OF ENOLOGY AND VITICULTURE - 1992 - Assessing the control potential of Aldicarb against Grapevine Phylloxera. The PDF file you selected should load here if your Web browser has a PDF reader plug-in installed (for example, a recent version of Adobe Acrobat Reader). 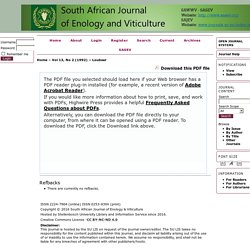 If you would like more information about how to print, save, and work with PDFs, Highwire Press provides a helpful Frequently Asked Questions about PDFs. Alternatively, you can download the PDF file directly to your computer, from where it can be opened using a PDF reader. To download the PDF, click the Download link above.

Fullscreen Fullscreen Off Refbacks There are currently no refbacks. PROC. FLA. STATE HORT. SOC. - 1994 - Pest and Yield responses of citrus to Aldicarb in a Flatwoods grove. AGFAX 29/07/16 South Carolina: Pesticide Aldicarb to Return in 2017. An old friend is returning to South Carolina to help agricultural producers in their fight against insects and nematodes. 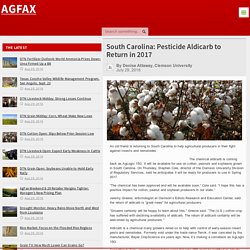 The chemical aldicarb is coming back as AgLogic 15G. It will be available for use on cotton, peanuts and soybeans grown in South Carolina. On Thursday, Stephen Cole, director of the Clemson University Division of Regulatory Services, said he anticipates it will be ready for producers to use in Spring 2017. “The chemical has been approved and will be available soon,” Cole said. “I hope this has a positive impact for cotton, peanut and soybean producers in our state.” THE NEWSSTAND 29/07/16 Pesticide aldicarb is back for use in South Carolina. CLEMSON — An old friend is returning to South Carolina to help agricultural producers in their fight against insects and nematodes. 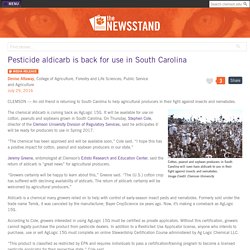 Cotton, peanut and soybean producers in South Carolina will soon have aldicarb to use in their fight against insects and nematodes.Image Credit: Clemson University The chemical aldicarb is coming back as AgLogic 15G. It will be available for use on cotton, peanuts and soybeans grown in South Carolina. GROUND WATER - JULY 1982 - Investigation of Aldicarb in ground water in selected areas of the Central Sand Plain of Wisconsin. EPA 26/04/16 Draft Risk Assessments for Five Pesticides, Including Aldicarb and Coumaphos, Available for Public Comment.

EPA is releasing draft risk assessments on five pesticides for public comment as part of our open and transparent registration review process, a program mandated by FIFRA that re-evaluates all pesticides on a 15-year cycle. 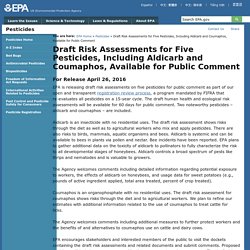 The draft human health and ecological risk assessments will be available for 60 days for public comment. Two noteworthy pesticides – aldicarb and coumaphos – are included. Aldicarb is an insecticide with no residential uses. The draft risk assessment shows risks through the diet as well as to agricultural workers who mix and apply pesticides. There are also risks to birds, mammals, aquatic organisms and bees. The Agency welcomes comments including detailed information regarding potential exposure to workers, the effects of aldicarb on honeybees, and usage data for sweet potatoes (e.g., pounds of active ingredient applied, total area treated, percent of crop treated).

Sci Total Environ. 2015 Feb 1;505:1093-9. Continued implication of the banned pesticides carbofuran and aldicarb in the poisoning of domestic and wild animals of the Canary Islands (Spain). WIKIPEDIA – Aldicarb. Aldicarb is a carbamate insecticide which is the active substance in the pesticide Temik. 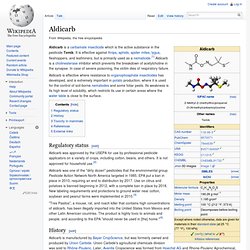 It is effective against thrips, aphids, spider mites, lygus, fleahoppers, and leafminers, but is primarily used as a nematicide.[1] Aldicarb is a cholinesterase inhibitor which prevents the breakdown of acetylcholine in the synapse. In case of severe poisoning, the victim dies of respiratory failure. Aldicarb is effective where resistance to organophosphate insecticides has developed, and is extremely important in potato production, where it is used for the control of soil-borne nematodes and some foliar pests. Its weakness is its high level of solubility, which restricts its use in certain areas where the water table is close to the surface.

Regulatory status[edit] Aldicarb was approved by the USEPA for use by professional pesticide applicators on a variety of crops, including cotton, beans, and others. History[edit] For humans, it is the most toxic insecticide used on field crops. References[edit] WIKIPEDIA – Aldicarbe. Un article de Wikipédia, l'encyclopédie libre. 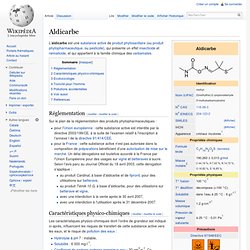