GOV_UK 11/02/21 UK breeds at risk from exotic animal disease outbreaks FAnGR register of at-risk breeds of cattle, horses and ponies, sheep, goats, pigs and poultry; criteria and definitions. GOV_UK 18/07/19 Defra's annual report and accounts 2018 to 2019. If you use assistive technology (such as a screen reader) and need a version of this document in a more accessible format, please email defra.helpline@defra.gov.uk. 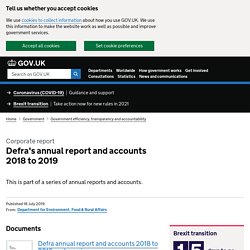 Please tell us what format you need. It will help us if you say what assistive technology you use. Prev Vet Med. 2012 June 1; 105(1-2): 110–117. Impact of regulatory perturbations to disease spread through cattle movements in Great Britain. 1. 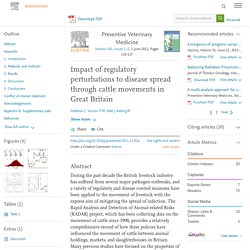 Introduction The movement of animals within the United Kingdom (UK) is vital to the economics of the livestock industry, but carries with it the risk of transmitting infectious diseases across substantial geographic distances (Haydon et al., 2003, Gilbert et al., 2005, Kiss et al., 2006, Green et al., 2006, Green et al., 2008, Carrique-Mas et al., 2008). For this reason, data on the movement of all cattle in the UK are collected by the Department for Environment Food and Rural Affairs (DEFRA), as part of the RADAR system, itself part of the Veterinary Surveillance Strategy (Lysons et al., 2007) (strictly, data are collected on the movement of all bovines including water buffalo, bison, and brahman, however throughout we will use the term cattle due to its greater familiarity). 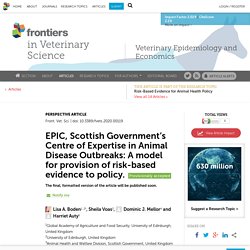 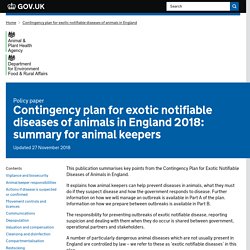 It explains how animal keepers can help prevent diseases in animals, what they must do if they suspect disease and how the government responds to disease. Further information on how we will manage an outbreak is available in Part A of the plan. Information on how we prepare between outbreaks is available in Part B. The responsibility for preventing outbreaks of exotic notifiable disease, reporting suspicion and dealing with them when they do occur is shared between government, operational partners and stakeholders. A number of particularly dangerous animal diseases which are not usually present in England are controlled by law – we refer to these as ‘exotic notifiable diseases’ in this plan.

Stakeholders include all those who may be affected by an outbreak of exotic notifiable disease. DEFRA 20/08/18 Defra's annual report and accounts 2017 to 2018. Skip to main content GOV.UK uses cookies to make the site simpler. 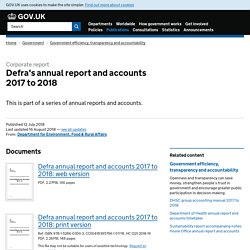 Find out more about cookies Is this page useful? FRONTIERS IN VETERINARY SCIENCE 27/11/17 Animal Health Surveillance in Scotland in 2030: Using Scenario Planning to Develop Strategies in the Context of “Brexit” Introduction Animal health surveillance systems are critical at regional, national, and global levels to identify and mitigate biological and chemical hazards (such as animal or zoonotic diseases or syndromes, toxins, or contaminants) to ensure public health and food security and safety. 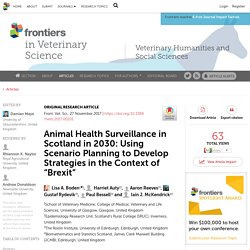 These systems are designed to address societal priorities such as the development of early warning tools for exotic, novel and reemerging diseases, the facilitation of effective disease control, and the monitoring of temporal or spatial disease trends. DEFRA 09/10/17 Animal pathogens: guidance on controls. 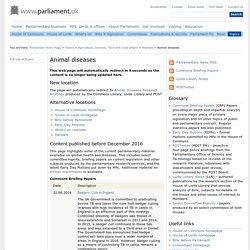 New location The page will automatically redirect to Animal Diseases Research Briefings produced by the Commons Library, Lords Library and POST Alternative locations Content published before December 2016. GOV_UK 08/05/15 2010 to 2015 government policy: animal and plant health. Issue Preventing animal disease is important for animal health and welfare, but animal diseases including those of fish and shellfish, can also be a risk to human health. 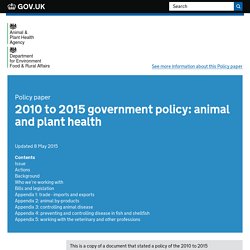 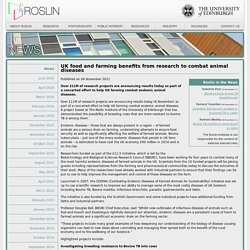 Over £11M of research projects are announcing results today (8 November) as part of a concerted effort to help UK farming combat endemic animal diseases. A project based at The Roslin Institute of the University of Edinburgh that has demonstrated the possibility of breeding cows that are more resistant to bovine TB is among them. Endemic diseases – those that are always present in a region – of farmed animals are a serious drain on farming, undermining attempts to ensure food security as well as significantly affecting the welfare of farmed animals.

The initiative is also funded by the Scottish Government and some individual projects have additional funding from Defra and industrial partners. Highlighted projects include: THE BULLETIN OF THE ROYAL COLLEGE OF PATHOLOGISTS - OCT 2014 - The future of surveillance for animal diseases in England and Wales: does it matter and can the country afford it? Preventive Veterinary Medicine Volume 121, Issues 3–4, 1 October 2015, Scenario planning: The future of the cattle and sheep industries in Scotland and their resiliency to disease. Open Access Highlights Scenario planning workshops on cattle and sheep sectors. 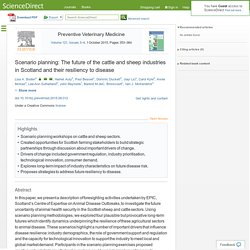 This paper reviews some of the evidence for that impact and the future trajectories for livestock farming that it may well entail. BVA_CO_UK - 2012  - The Veterinary Development Council Report 2011-2012. DEFRA 02/02/15 Guidance - Animal pathogens: guidance on controls. DEFRA - 2014 - Animal and Plant Health in the UK: Building our science capability. DEFRA - FEV 2014 - Student opportunities - AHVLA Fellowship in Farm Animal Pathology. AHVLA Fellowship in Farm Animal Pathology Applications are invited from veterinary graduates to undertake a four-year training programme (residency) in Veterinary Anatomic Pathology through an exciting new collaboration between the pathology groups at the Royal Veterinary College and AHVLA Weybridge.

*↵Author for correspondence (r.d.fish@exeter.ac.uk). Abstract Uncertainty is an inherent feature of strategies to contain animal disease. 1. This paper examines uncertainties associated with strategies to contain animal disease. A range of techniques, originating from within the sciences, are available to decision makers to explain the character and significance of uncertainty across different aspects of disease containment. Important though these techniques are, they cannot reveal how and why uncertainties come to be embedded in the policy and practice of containment, and indeed, what role institutional arrangements for animal disease governance may play in perpetrating them. The origins of this paper are in interdisciplinary research. DEFRA - DEC 2010 - Responsibility and Cost Sharing for Animal Health and Welfare (England Advisory Group on Responsibility and C. DEFRA 26/04/11 Sharing responsibility for animal health and welfare policy. People affected by Government policy on animal health and welfare will for the first time make recommendations on those policies directly to Ministers, Agriculture Minister Jim Paice announced today.

A new Animal Health and Welfare Board for England will bring experts including farmers, veterinarians, welfare experts and others from outside Government together with the Chief Veterinary Officer and civil servants to make direct policy recommendations on policy affecting the health and welfare of all kept animals such as farm animals, horses and pets. Jim Paice said: “This is a completely new way of working. It replaces the old ways, where the people most affected by decisions were kept at arm’s length from policy making on those subjects. “This is about the Big Society not just existing in our communities, but in the heart of Government - helping to put the decisions in the hands of those who are doing the work on the ground.

The Board’s responsibilities include: Notes.