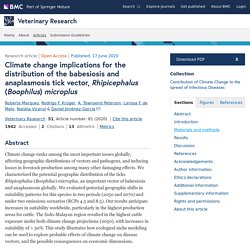 Exp Appl Acarol 38:219–235PubMed Article Google Scholar 2.Brito DRB, Santos ACG (2005) Ectoparasitos em rebanhos de caprinos e ovinos na microrregião do Alto Mearim e Grajau, Estado do Maranhão. TROPICAL MEDICINE AND HEALTH 11/07/19 Evaluation of the inhibitory effect of ivermectin on the growth of Babesia and Theileria parasites in vitro and in vivo. Cultivation conditions Parasites and mice The United States Department of Agriculture (USDA) strain of T. equi and B. caballi, the German bovine strain of B. divergens [32], the Texas strain of B. bovis, and the Argentina strain of B. bigemina were used for the in vitro studies [28]; for the in vivo studies, B. microti (Munich strain) was used [28, 34]. 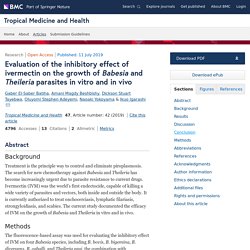 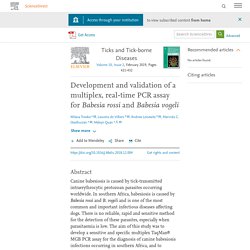 In southern Africa, babesiosis is caused by Babesia rossi and B. vogeli and is one of the most common and important infectious diseases affecting dogs. There is no reliable, rapid and sensitive method for the detection of these parasites, especially when parasitaemia is low. The aim of this study was to develop a sensitive and specific multiplex TaqMan® MGB PCR assay for the diagnosis of canine babesiosis infections occurring in southern Africa, and to discriminate between Babesia rossi and B. vogeli. The fitness of purpose of the assay was to confirm diagnosis of suspect or clinical cases, and estimate prevalence of infection for research purposes. A total of 648 published sequences were used to design the assay. The assay had a broad dynamic range and amplified B. rossi and B. vogeli efficiently (98.6% and 94.7% respectively). PATHOGENS 20/01/21 Challenges in Tick-Borne Pathogen Detection: The Case for Babesia spp. Identification in the Tick Vector.

The causative agents of Babesiosis are intraerythrocytic protozoa of the genus Babesia. 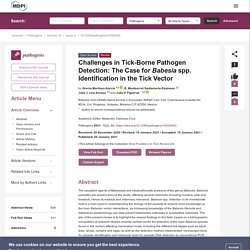 Babesia parasites are present around the world, affecting several mammals including humans, pets and livestock, hence its medical and veterinary relevance. Babesia spp. detection in its invertebrate host is a main point in understanding the biology of the parasite to acquire more knowledge on the host–Babesia–vector interactions, as increasing knowledge of the Babesia lifecycle and babesiosis epidemiology can help prevent babesiosis outbreaks in susceptible mammals. ►▼ Show Figures Figure 1 This is an open access article distributed under the Creative Commons Attribution License which permits unrestricted use, distribution, and reproduction in any medium, provided the original work is properly cited. PATHOGENS 19/02/21 Global Distribution of Babesia Species in Questing Ticks: A Systematic Review and Meta-Analysis Based on Published Literature.

Babesiosis caused by the Babesia species is a parasitic tick-borne disease. 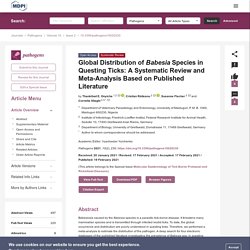 It threatens many mammalian species and is transmitted through infected ixodid ticks. To date, the global occurrence and distribution are poorly understood in questing ticks. Therefore, we performed a meta-analysis to estimate the distribution of the pathogen. A deep search for four electronic databases of the published literature investigating the prevalence of Babesia spp. in questing ticks was undertaken and obtained data analyzed. Our results indicate that in 104 eligible studies dating from 1985 to 2020, altogether 137,364 ticks were screened with 3069 positives with an estimated global pooled prevalence estimates (PPE) of 2.10%. ►▼ Show Figures Figure 1 This is an open access article distributed under the Creative Commons Attribution License which permits unrestricted use, distribution, and reproduction in any medium, provided the original work is properly cited.

PATHOGENS 02/07/19 Babesia divergens: A Drive to Survive. The development of synchronization methods for B. divergens allowed the detailed analysis of life cycle parameters of the parasite [30]. 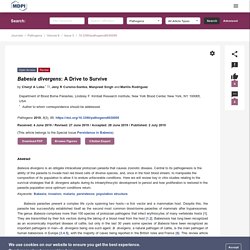 Surprisingly, it has been found that unlike other Apicomplexan parasites, population control measures are adopted by the parasite in which, at high parasitemia, options to prolong the RBC cycle are taken, whereas at lower parasitemia, exiting the RBC is chosen to invade new cells and increase population numbers. This developmental choice is unique for Babesia compared with other Apicomplexans like P. falciparum and Toxoplasma gondii, which have precisely timed intracellular cycles. P. falciparum typically spends 48 h in each erythrocytic cycle, while tachyzoite of T. gondii has a 6 h growth and replication period inside the host cell before egress [35]. Multiple definitions of the intra-erythrocytic lifecycle for B. divergens have been laid out in keeping with the complex morphological presentation of the parasites inside the RBC. PATHOGENS 08/03/21 A Comparative Genomic Study of Attenuated and Virulent Strains of Babesia bigemina.

Cattle babesiosis is a socio-economically important tick-borne disease caused by Apicomplexa protozoa of the genus Babesia that are obligate intraerythrocytic parasites. 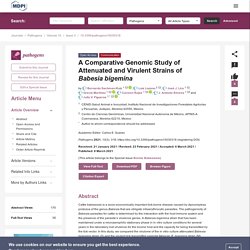 The pathogenicity of Babesia parasites for cattle is determined by the interaction with the host immune system and the presence of the parasite’s virulence genes. A Babesia bigemina strain that has been maintained under a microaerophilic stationary phase in in vitro culture conditions for several years in the laboratory lost virulence for the bovine host and the capacity for being transmitted by the tick vector.

In this study, we compared the virulome of the in vitro culture attenuated Babesia bigemina strain (S) and the virulent tick transmitted parental Mexican B. bigemina strain (M). ►▼ Show Figures Figure 1 This is an open access article distributed under the Creative Commons Attribution License which permits unrestricted use, distribution, and reproduction in any medium, provided the original work is properly cited. TRENDS IN PARASITOLOGY 04/07/19 Babesiosis Vaccines: Lessons Learned, Challenges Ahead, and Future Glimpses. 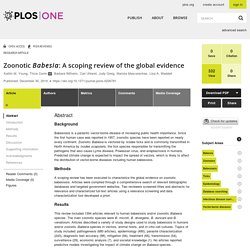 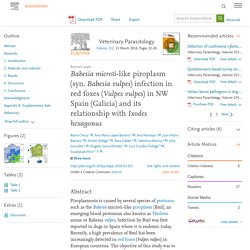 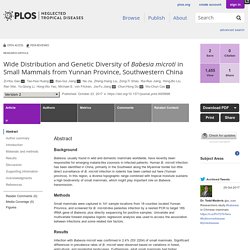 PARASITOL RES 25/12/16 Status of babesiosis among domestic herbivores in Iran: a systematic review and meta-analysis. Parasit Vectors. 2017; 10: 128. Improved molecular detection of Babesia infections in animals using a novel quantitative real-time PCR diagnostic assay targeting mitochondrial DNA. Veterinary Parasitology Volume 229, 15 October 2016, Babesia ovata: Taxonomy, phylogeny and epidemiology. Parasites & Vectors 20/05/16 Babesia spp. in ticks and wildlife in different habitat types of Slovakia. There are only a few studies of piroplasmid parasites associated with ticks and wildlife from Slovakia. This calls for further investigations on the distribution and diversity of piroplasmid species and their relevance to public and animal health in the region. PARASITES & VECTORS 15/07/11 Occurrence of Babesia spp., Rickettsia spp. and Bartonella spp. in Ixodes ricinus in Bavarian public parks, Germany.

The results of this study show that tick-borne pathogens can occur not only in natural woodlands, but also in recreational urban areas. This demonstrates the importance of systematic investigations of different habitat types to broaden the understanding and knowledge about these pathogens and their tick vector. The evidence of Babesia sp. PARASITES & VECTORS 04/08/12 Prevalence and diversity of Babesia spp. in questing Ixodes ricinus ticks from Norway.

The realtime-PCR analysis of I. ricinus revealed an overall Babesia prevalence of 0.9% in our material. This level is comparable to other studies using similar approaches for detection: in Italy the Babesia sp. ‘EU1’ prevalence was 0.85% [23], in Estonia 1,4% [24], in Poland 1.6% [25], and corresponds to previous findings in Norway [12, 18]. PARASITES & VECTORS 20/05/16 Babesia spp. in ticks and wildlife in different habitat types of Slovakia. J Clin Microbiol. 2004 Jun; 42(6): 2799–2801. Prevalence of Borrelia burgdorferi, Bartonella spp., Babesia microti, and Anaplasma phagocytophila in Ixodes scapularis Ticks Collected in Northern New Jersey.