VIROLOGY JOURNAL 06/07/20 Impact of pyriproxyfen on virus behavior: implications for pesticide-induced virulence and mechanism of transmission. PPF appears to decrease viability of VSV-GFP infected trophoblasts and Jurkat cells (Fig. 1) We conducted viability tests of trophoblasts, HeLa cells and Jurkat cells treated with varying concentrations of PPF from 0.001 to 10.0 μg/mL These cells were subsequently uninfected or infected with VSV (a prototypical enveloped virus that replicates in the cytoplasm of cells, similarly to ZIKV) fused to Green fluorescence protein (VSV-GFP) at a MOI of 1.0. 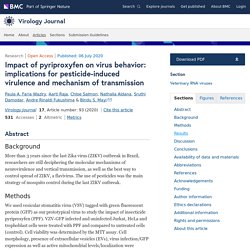 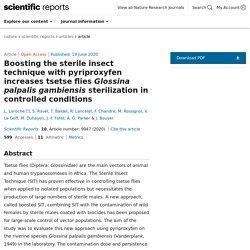 Previous studies have shown that PP impairs neither adult insect activity nor life expectancy37. This result is of great importance with regard to their release in the field in the framework of an SIT program. Unexpectedly, PP-free powder F15 caused a high mortality rate in tsetse flies (Fig. 1). Pyriproxyfen has a higher density than the other components used in F15 powder. As a result, the F15 powder has a lower density than the F15 + PP powder. 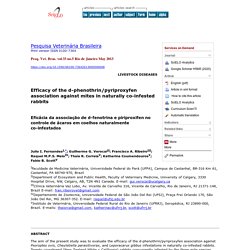 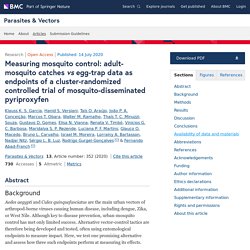 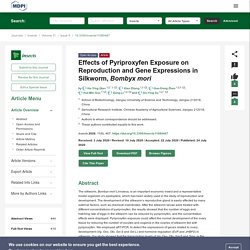 The development of the silkworm’s reproductive gland is easily affected by many external factors, such as chemical insecticides. After the silkworm larvae were treated with different concentrations of pyriproxyfen, the results showed that the number of eggs and hatching rate of eggs in the silkworm can be reduced by pyriproxyfen, and the concentration effects were displayed. Pyriproxyfen exposure could affect the normal development of the ovary tissue by reducing the number of oocytes and oogonia in the ovaries of silkworm fed with pyriproxyfen. We employed qRT-PCR, to detect the expressions of genes related to ovary development (Vg, Ovo, Otu, Sxl-S and Sxl-L) and hormone regulation (EcR and JHBP2) in silkworm. ►▼ Show Figures. GESUNDE PLANZEN 09/06/20 Residual Efficacy of Pyriproxyfen on Grain Commodities Against Stored Product Insect Pests. Ali Q, Hasan M, Sagheer M, Saleem S, Faisal M et al (2017) Screening of seven insect growth regulators for their anti-insect activity against the larvae of Trogoderma granarium (Everts) and Tribolium castaneum (Herbst). 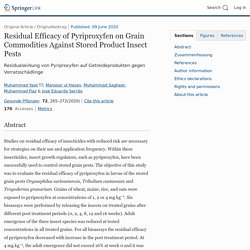 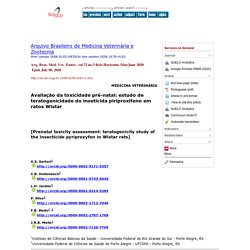 UFL_EDU - 2019 - Thèse en ligne : THE HETEROPTERAN PEST COMPLEX IN FLORIDA PEACHES AND THE USE OF PYRIPROXYFEN FOR DIAPAUSE INTERFERENCE AND PARASITOID REARING. JOURNAL OF MEDICAL ENTOMOLOGY 18/05/19 Efficacy of Novaluron + Pyriproxyfen (Tekko Pro) Insect Growth Regulators Against Amblyomma americanum (Acari: Ixodidae), Rhipicephalus (Boophilus) annulatus, Rhipicephalus (Boophilus) microplus, and Rhipicephalus sa. We use cookies to enhance your experience on our website.By continuing to use our website, you are agreeing to our use of cookies. 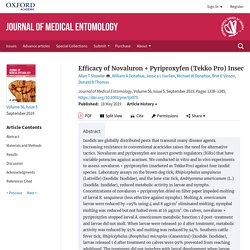 You can change your cookie settings at any time. EFSA 17/07/19 Peer review of the pesticide risk assessment of the active substance pyriproxyfen. Sci Rep. 2017; 7: 8694. Evaluation of the safe use and dietary risk of beta-cypermethrin, pyriproxyfen, avermectin, diflubenzuron and chlorothalonil in button mushroom. WILEY 27/12/11 Egg exposure to pyriproxyfen in the tomato leaf miner Tuta absoluta: ovicidal activity or behavioural‐modulated hatching mortality? Insecticide susceptibility varies with the insect life stage and although the egg stage is sometimes perceived as the most vulnerable, it is a difficult target for insecticide application and little studied as such. 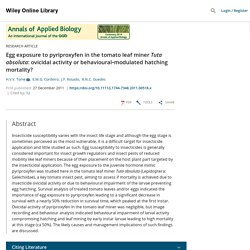 Egg susceptibility to insecticides is generally considered important for insect growth regulators and insect pests of reduced mobility like leaf miners because of their placement on the host plant part targeted by the insecticidal application. The egg exposure to the juvenile hormone mimic pyriproxyfen was studied here in the tomato leaf miner Tuta absoluta (Lepidoptera: Gelechiidae), a key tomato insect pest, aiming to assess if mortality is achieved due to insecticide ovicidal activity or due to behavioural impairment of the larvae preventing egg hatching.

PEST MANAGEMENT SCIENCE 31/10/17 Seasonal field efficacy of pyriproxyfen autodissemination stations against container‐inhabiting mosquito Aedes albopictus under different habitat conditions. PARASITES & VECTORS 06/01/18 Effectiveness of a novel long-lasting pyriproxyfen larvicide (SumiLarv®2MR) against Aedes mosquitoes in schools in Yangon, Myanmar. The proportion of infested containers in the intervention schools was reduced by one-third after the application of SumiLarv®2MR resin discs, while the proportion remained almost unchanged in the control schools. 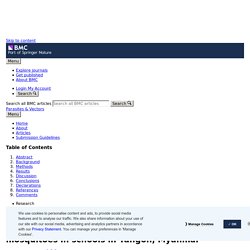 This was likely due to the small sample size of schools. Nevertheless, these results clearly showed the effects of the larvicide. The most important features of SumiLarv®2MR resin disc are its time release and longer lasting effects. PARASITE 21/10/15 Efficacy of Olyset® Duo, a permethrin and pyriproxyfen mixture net against wild pyrethroid-resistant Anopheles gambiae s.s. from Côte d’Ivoire: an experimental hut trial.

Recent outbreaks of chikungunya (CHIKV) and Zika (ZIKV) virus infections have stimulated increased interest in management strategies for vector species such as Aedes aegypti (L.) and Aedes albopictus (Skuse) [1, 2, 3, 4]. The latter species has been reported as the sole vector of CHIKV in explosive epidemics on the islands of La Réunion and Mauritius [2], and a potential secondary vector of ZIKV [4]. The CHIKV outbreak was caused by a new variant of the virus [Reunion Island CHIKV isolates (CHIKV 226OPY1)] with a single adaptive mutation, an amino acid change from alanine to valine in the E1 glycoprotein which increased the infection and dissemination of the virus in Ae. albopictus [5, 6, 7].

Since there are no vaccines or specific antiviral treatments available for CHIKV or ZIKV, Ae. albopictus surveillance and control is critical for the prevention of outbreaks. Journal of Asia-Pacific Entomology 10/06/16 The impact of pyriproxyfen on the development of honey bee (Apis mellifera L.) colony in field. EFSA 26/01/16 Modification of the existing maximum residue level for pyriproxyfen in bananas. Parasit Vectors. 2010; 3: 88. Field evaluation of pyriproxyfen and spinosad mixture for the control of insecticide resistant Aedes aegypti in Martinique (French West Indies) Acta Tropica Volume 150, October 2015, Evaluating the sterilizing effect of pyriproxyfen treated mosquito nets against Anopheles gambiae at different blood-feeding intervals.

Previous field studies have demonstrated the potential for the autodissemination technique when applied to free flying population Aedes mosquito species under field settings [21, 22]. In this study, we also proved the occurrence of PPF autodissemination using captive populations of malaria vector An. arabiensis under semi-field settings. Overall, autodissemination of PPF by An. arabiensis inhibited 82% of adult emergence, which is compatible with the control level of 80% recommended by WHOPES for controlling malaria vector juvenile stages [33] under semi-field conditions. In some cases, for example experiment 1, Figure 2C, total emergence inhibition in PPF-treated sections was achieved with no single adult mosquito emerging from these habitats. Larval bioassays showed a significantly lower adult emergence rate in the treatment sections compared to the control further confirming the delivery of PPF to the breeding habitats in all experiments.

EFSA 21/08/14 Conclusion on the peer review of the pesticide risk assessment of confirmatory data submitted for the active substance pyriproxyfen. Pyriproxyfen was included in Annex I to Directive 91/414/EEC on 1 July 2008 by Commission Directive 2008/69/EC, amended by Commission Directive 2010/39/EU and has been deemed to be approved under Regulation (EC) No 1107/2009, in accordance with Commission Implementing Regulation (EU) No 540/2011, as amended by Commission Implementing Regulation (EU) No 541/2011. It was a specific provision of the approval that the applicant was required to submit to the European Commission further studies on aquatic insects and pollinators by 30 June 2012.

In accordance with the specific provision, the applicant, Sumitomo Chemical Agro Europe S.A., submitted an updated dossier in July 2012, to address the risk to aquatic insects from Pyriproxyfen and from the metabolite DPH-PYR and to address the risk to pollinators, which was evaluated by the designated RMS, the Netherlands in the form of an Addendum to the Draft Assessment Report. PLOS 07/04/15 Mosquito-Disseminated Pyriproxyfen Yields High Breeding-Site Coverage and Boosts Juvenile Mosquito Mortality at the Neighborhood Scale. Abstract Background Mosquito-borne pathogens pose major public health challenges worldwide. With vaccines or effective drugs still unavailable for most such pathogens, disease prevention heavily relies on vector control.

To date, however, mosquito control has proven difficult, with low breeding-site coverage during control campaigns identified as a major drawback. DAILY STAR 13/02/16 Zika hoax claim: Virus NOT shrinking tots' heads – and doctors may have found 'real cause'