NUFFIELD INTERNATIONAL - AVRIL 2017 - Will It Have Legs? An Investigation into Synthetic Food and the Implications for NZ Agriculture. All scholars reports from year 2006 onwards are now hosted on this web site. 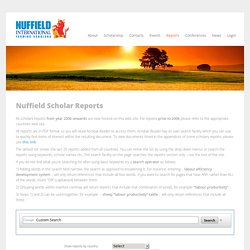 For reports prior to 2006 please refer to the appropriate countries web site. All reports are in PDF format so you will need Acrobat Reader to access them. Acrobat Reader has its own search facility which you can use to quickly find items of interest within the resulting document. To view documents listed in the appendices of some scholars reports, please use this link The default list shows the last 20 reports added from all countries. If you do not find what you're searching for after using basic keywords try a search operator as follows: 1) Adding words in the search field narrows the search as opposed to broadening it. 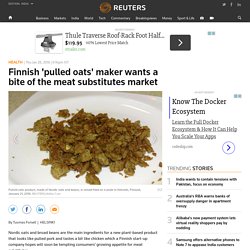 Maija Itkonen and Reetta Kivela, founders of the Finnish food technology start-up Gold & Green Foods, call the product "pulled oats". "The oats are sheared and heated under the right conditions and combined with the beans. The amino acids that are lacking in oats are in the beans, so they are a good combination," said Kivela, a food scientist, at a lunchtime tasting session in a local restaurant in Helsinki. "We have patented our production method that allows us to produce the fibrous texture of oats and beans" she said. The company now aims to have products in stores in Finland and Sweden by the end of the year.

Behind them are Nestle, Pinnacle Foods and Hain Celestial Group. FOOD NAVIGATOR 25/03/16 Meat substitutes market set to top €3.57 billion by 2016. The steady increase from this year’s figure of $3.86 billion (€3.45 billion) is also closely linked to consumers’ needs for alternative protein sources, according to the Visiongain report entitled Meat-Substitutes Market Report 2016-2026 . 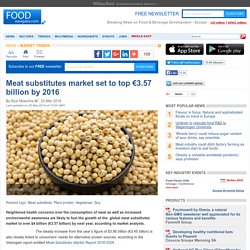 “Meat substitutes are a part of the free-from trend, which is driven by health concerns, and the health & wellness trend,” it said. The report also noted that the growth of the global population is also a significant driver of the market. UN projections show that by 2050, the global population will reach 8.9 billion people, increasing by 47% since 2000. Alternative sources Visiongain said: “In this light, alternative sources of protein become an important factor of sustainable development. Food Quality and Preference Volume 42, June 2015,Appropriateness, acceptance and sensory preferences based on visual information: A web-based survey on meat substitutes in a meal context. Agro FOOD Industry Hi Tech - vol 25(1) - January/February 2014 The evolution of a plant-based alternative to meat - From niche markets to widely accepted meat alternatives. 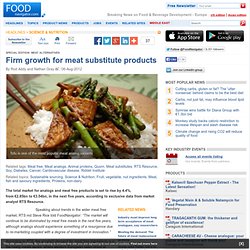 Speaking about trends in the wider meat free market, RTS md Steve Rice told FoodNavigator: “The market will continue to be dominated by meat free meals in the next five years, although analogs should experience something of a resurgence due to re-marketing coupled with a degree of investment in innovation.” According to RTS, the greatest demand for meat free ingredients is in the ready meals sector, where western European sales stood at €1.48bn and were set to grow by 3.5% to €1.76bn by 2016. The next largest market is burgers and sausages, which RTS predicts will reach €854m by 2016, growth of 3.9%. Meat analogs Having had a tough time in the past few years, sales of meat analogs, such as tofu (bean curd) would rise by 4.3%, from €359m to €443m in 2016, said RTS. Environmental perspective Emerging proteins.

LA SANTE AU MENU - MARS 2011 - Guide des substituts de viande. As. J. Food Ag-Ind. 2012, 5(04), 307-310 Safety of vegetarian meat analogs and their natural meat products using somatic mutatio. Appetite 56(2011)662â€“673 Replacement of meat by meat substitutes. A survey on person-and product-related factors in consumer a. Food Quality and Preference 28 (2013) 253â€“263 Are meat substitutes liked better over time? A repeated in-home use test with me. INHABITAT 03/07/12 LikeMeat Hopes to Be a Juicy Breakthrough in Fake Meat. The meat industry alone is said to be responsible for around 18% of the World’s greenhouse gas emissions, and it employs a horrifying spectrum of cruel practices and dangerous contaminants. 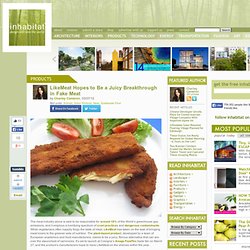 While vegetarians often happily forgo the taste of meat, LikeMeat has taken on the task of bringing meat lovers to the greener side of nutrition. The plant-based product, developed by a team of European academics and food manufacturers, claims to be a juicy, fibrous alternative that can win over the staunchest of carnivores. It’s set to launch at Cologne’s Anuga FoodTec trade fair on March 27, and the product’s manufacturers hope to have LikeMeat on the shelves within the year. Image © flickr user Joost J. Bakker IJmuiden Florian Wild, a researcher at the Fraunhofer Institute for Process Engineering and Packaging IVV in Freising is spearheading the project. Wild admits that there is still some work to do on the flavor of LikeMeat, which he describe as “pleasant.” APPROPEDIA â€“ LikeMeat. Le site LikeMeat. EUROPE 19/07/13 Projet de recherche 2010-2013 - LikeMeat â€“ The evolution of a plant-based alternative to meat.

Due to health, environmental and animal welfare concerns, a growing number of Europeans are reducing their meat consumption and shifting from an animal protein to a plant-based diet. 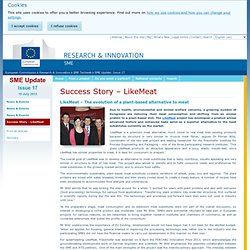 The LikeMeat project has developed a product whose advanced texture and enhanced taste serve as a superior alternative to the meat substitutes currently on the market. ‘LikeMeat is a premium meat alternative, much closer to real meat than existing products because its structure is very similar to muscle meat fibres,’ argues Dr Florian Wild, coordinator of the two-year project and leading researcher for the Fraunhofer Institute for Process Engineering and Packaging – one of the three participating research institutes.