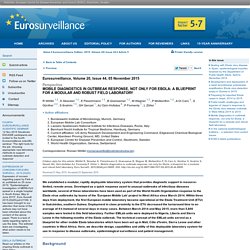 The current epidemic has killed within a year of its onset more than 10,300 people as reported from eight affected countries Liberia, Guinea, Sierra Leone, Mali, Nigeria, Spain, the United Kingdom and the United States [1]. EUROSURVEILLANCE 23/10/14 Au sommaire: Assessing the impact of travel restrictions on international spread of the 2014 West African Ebola epidemic. The quick spread of an Ebola outbreak in West Africa has led a number of countries and airline companies to issue travel bans to the affected areas. 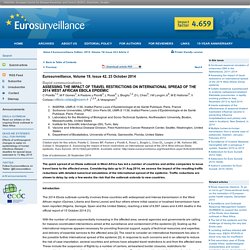 Considering data up to 31 Aug 2014, we assess the impact of the resulting traffic reductions with detailed numerical simulations of the international spread of the epidemic. Traffic reductions are shown to delay by only a few weeks the risk that the outbreak extends to new countries. Introduction. EUROSURVEILLANCE 05/11/15 Au sommaire: Public health challenges and legacies of Japan’s response to the Ebola virus disease outbreak in West Africa 2014 to 2015 ; + Author affiliations Citation style for this article: Saito T. 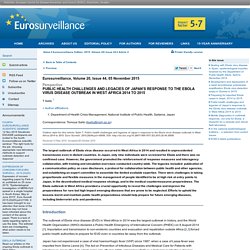 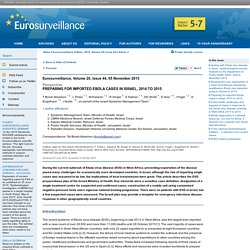 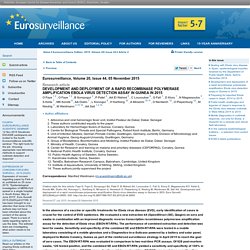 Development and deployment of a rapid recombinase polymerase amplification Ebola virus detection assay in Guinea in 2015. EUROSURVEILLANCE 05/11/15 Au sommaire: Dealing with Ebola virus disease in Spain: epidemiological inquiries received by the Department of Public Health Alerts, April to December 2014 ; EUROSURVEILLANCE 26/03/15 Ebola response missions: To go or not to go? Cross-sectional study on the motivation of European public health experts, December 2014. We surveyed European infectious disease epidemiologists and microbiologists about their decisions to apply for Ebola response missions. 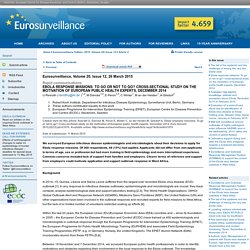 Of 368 respondents, 49 (15%) had applied. Applicants did not differ from non-applicants in terms of age, sex or profession but had more training in field epidemiology and more international experience. Common concerns included lack of support from families and employers. Clearer terms of reference and support from employers could motivate application and support outbreak response in West Africa.

Background In 2014–15, Guinea, Liberia and Sierra Leone suffered from the largest ever recorded Ebola virus disease (EVD) outbreak [1]. Between 19 November and 7 December 2014, we surveyed European public health professionals in order to identify motivations and obstacles regarding their involvement in the local response to the Ebola outbreak. EUROSURVEILLANCE 26/03/15 The tail of the epidemic and the challenge of tracing the very last Ebola case.

One year ago, on 23 March 2014, the World Health Organization (WHO) announced that it had been notified ‘of a rapidly evolving outbreak of Ebola virus disease (EVD) in forested areas of south-eastern Guinea’. 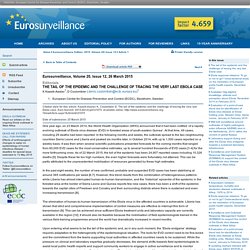 At that time, 49 cases, including 29 deaths had been reported. In the following months and weeks, the outbreak spread to the two neighbouring countries Sierra Leone and Liberia and peaked six months later, in October 2014, with up to 1,500 cases reported on a weekly basis. It was then when several scientific publications presented forecasts for the coming months that ranged from 60,000 EVD cases for the most conservative estimates, up to several hundred thousands of EVD cases [1-4] for the more forthcoming ones. As of 22 March 2015, the toll of the epidemic has been 24,907 reported cases including 10,326 deaths [5]. Despite these far too high numbers, the even higher forecasts were fortunately not attained. Eurosurveillance - View Article. We report development and implementation of a short message service (SMS)-based system to facilitate active monitoring of persons potentially exposed to Ebola virus disease (EVD), whether returning from EVD-affected countries, or contacts of local cases, should they occur. 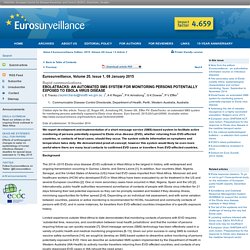 The system solicits information on symptoms and temperature twice daily. We demonstrated proof-of-concept; however this system would likely be even more useful where there are many local contacts to confirmed EVD cases or travellers from EVD-affected countries. EUROSURVEILLANCE 26/03/15 The tail of the epidemic and the challenge of tracing the very last Ebola case. EUROSURVEILLANCE 26/03/15 Ebola response missions: To go or not to go? Cross-sectional study on the motivation of European public health experts, December 2014. EUROSURVEILLANCE 08/01/15 EbolaTracks: an automated SMS system for monitoring persons potentially exposed to Ebola virus disease. 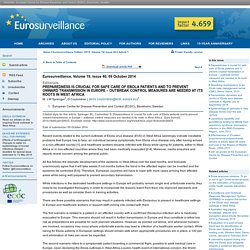 Preparedness is crucial for safe care of Ebola patients and to prevent onward transmission in Europe – outbreak control measures are needed at its roots in West Africa . Euro Surveill. 2014;19(40):pii=20925. Available online: Date of submission: 09 October 2014 Recent events related to the current outbreak of Ebola virus disease (EVD) in West Africa seemingly indicate inevitable problems that Europe has to face: an individual became symptomatic from Ebola virus disease only after having arrived in a non-affected country [1], and healthcare workers became infected with Ebola while caring for patients, either in West Africa or in non-affected countries where they had been medically evacuated [2-4].

Figure. EUROSURVEILLANCE 09/10/14 Au sommaire: Transmission dynamics and control of Ebola virus disease outbreak in Nigeria, July to September 2014. We analyse up-to-date epidemiological data of the Ebola virus disease outbreak in Nigeria as of 1 October 2014 in order to estimate the case fatality rate, the proportion of healthcare workers infected and the transmission tree. 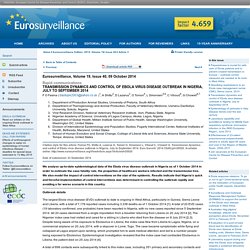 We also model the impact of control interventions on the size of the epidemic. Results indicate that Nigeria’s quick and forceful implementation of control interventions was determinant in controlling the outbreak rapidly and avoiding a far worse scenario in this country. EUROSURVEILLANCE 09/10/14 Au sommaire: Epidemiology of pertussis in Italy: Disease trends over the last century. We reviewed the epidemiology of pertussis in Italy over the last 125 years to identify disease trends and factors that could have influenced these trends. We described mortality rates (1888–2012), case fatality rates (1925–2012), cumulative incidence rates (1925–2013) and age-specific incidence rates (1974–2013). We compared data from routine surveillance with data from a paediatric sentinel surveillance system to estimate under-notification. Pertussis mortality decreased from 42.5 per 100,000 population in 1890 to no reported pertussis-related death after 2002. Incidence decreased from 86.3 per 100,000 in 1927 to 1 per 100,000 after 2008.

Vaccine coverage increased from 32.8% in 1993 to about 96% after 2006. EUROSURVEILLANCE 04/09/14 Au sommaire: Association between temperature, humidity and ebolavirus disease outbreaks in Africa, 1976 to 2014. Ebolavirus disease (EVD) outbreaks have been occurring sporadically in Central Africa since 1976. In 2014, the first outbreak in West Africa was reported in Guinea. Subsequent outbreaks then appeared in Liberia, Sierra Leone and Nigeria. The study of environmental factors underlying EVD epidemiology may provide useful insights into when and where EVD outbreaks are more likely to occur.

In this paper, we aimed to investigate the association between climatic factors and onset of EVD outbreaks in humans.