FOODS 30/07/21 Wheat/Gluten-Related Disorders and Gluten-Free Diet Misconceptions: A Review. In the last 10,000 years, wheat has become one of the most important cereals in the human diet and today, it is widely consumed in many processed food products. 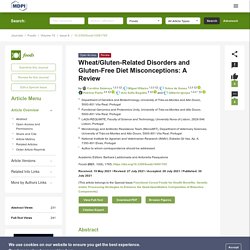 Mostly considered a source of energy, wheat also contains other essential nutrients, including fiber, proteins, and minor components, such as phytochemicals, vitamins, lipids, and minerals, that together promote a healthy diet. Apart from its nutritional properties, wheat has a set of proteins, the gluten, which confer key technical properties, but also trigger severe immune-mediated diseases, such as celiac disease. We are currently witnessing a rise in the number of people adhering to gluten-free diets unwarranted by any medical need. 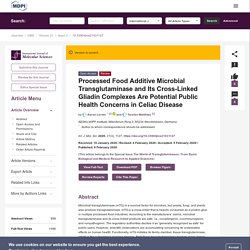 According to the manufacturers’ claims, microbial transglutaminase and its cross-linked products are safe, i.e., nonallergenic, nonimmunogenic, and nonpathogenic. The regulatory authorities declare it as “generally recognized as safe” for public users. However, scientific observations are accumulating concerning its undesirable effects on human health. WASHINGTON_EDU - 2020 - Thèse en ligne : Diet Quality and Food Additive Exposure in Children with and without Celiac Disease. NUTRIENTS 27/09/19 Measuring Quality of Life in Parents or Caregivers of Children and Adolescents with Celiac Disease: Development and Content Validation of the Questionnaire. Celiac disease (CD) is an autoimmune disorder triggered by the ingestion of gluten and affects approximately 1% of the global population. 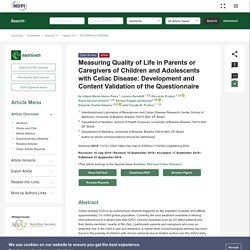 Currently, the only treatment available is lifelong strict adherence to a gluten-free diet (GFD). Chronic diseases such as CD affect patients and their family members’ quality of life (QoL); particularly parents and caregivers who play an essential role in the child’s care and treatment. A higher level of psychological distress has been found in the parents of children with chronic ailments due to limited control over the child’s daily activities and the child’s illness. In this context, the validation of a specific questionnaire of QoL is a valuable tool to evaluate the difficulties faced by parents or caregivers of children with this chronic illness.

A specific questionnaire for this population can elucidate the reasons for stress in their daily lives as well as the physical, mental, emotional, and social impact caused by CD. ►▼ Show Figures. IFT - SEPT 2019 - Gluten intake increases celiac disease risk in children. In the most comprehensive observational study of its kind to date, researchers at Lund University in Sweden have confirmed that the risk of developing celiac disease is connected to the amount of gluten children consume. 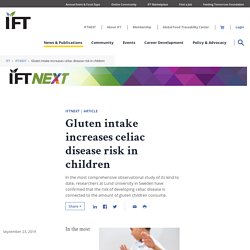 The results appeared in in the journal JAMA. The study followed 6,600 children at increased risk of developing celiac disease, from birth until the age of five, in Sweden, Finland, Germany, and the United States. The results showed “a clear association between the amount of gluten the children consumed and the risk of developing celiac disease or pre-celiac disease,” according to Daniel Agardh, associate professor at Lund University and leader of the study. WHOLE GRAINS COUNCIL 04/09/19 EMERGING RESEARCH ON THE RISE OF CELIAC DISEASE RAISES MORE QUESTIONS THAN ANSWERS. Depending on the day, gluten is seemingly the hero to every classically trained baker and the villain to every Hollywood actress. 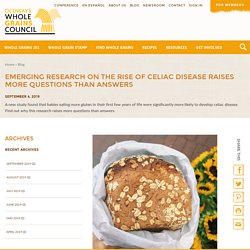 In the past decade or so, this relatively obscure protein in wheat (and barley, and rye) rose to infamy as awareness for celiac disease and other gluten-related disorders skyrocketed. While still quite rare (eﬀecting an estimated 1% of the U.S. population), celiac disease is on the rise, as are other autoimmune diseases like type 1 diabetes and multiple sclerosis.

To help search for patterns that might explain this increase, researchers followed 8,676 newborn babies who were genetically pre-disposed to celiac disease in Finland, Germany, Sweden, and the United States for 5 years, analyzing their food intake and monitoring for the development of celiac disease. SCIENCE ALERT 06/04/17 Evidence Emerges That Celiac Disease Could Be Triggered by a Seemingly Harmless Virus. Nutrition Research Volume 60, December 2018, Oat safety for celiac disease patients: theoretical analysis correlates adverse symptoms in clinical studies to contaminated study oats. M.M. 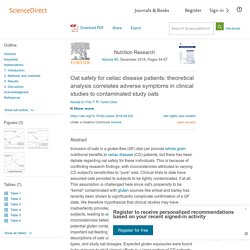 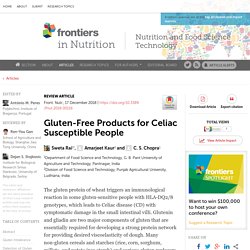 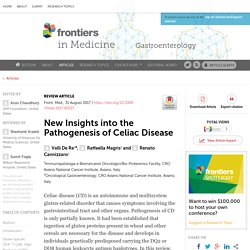 Studies of stored serum showed an increase in CD prevalence from fourfold to fivefold over the past 50 years (2). The geographic epidemiological distribution of CD along a north–south and west–east gradient in Europe related to socioeconomic status and observations from population migration suggests an environmental impact driving the increased incidence of CD but this topic is still more debated (3, 4). Nowadays, we know that CD results not only in variable degrees of small intestinal inflammation but also on a wide range of both gastrointestinal and extra-intestinal manifestations, and sometimes even in asymptomatic patients (5).

Celiac disease clinical identification is based on histological evaluation of the small intestine biopsies. Tissue transglutaminase 2 (TG2), the target of IgA autoantibodies, was also demonstrated to play a key role in the pathogenesis of CD. Nutrition Research Volume 60, December 2018, Oat safety for celiac disease patients: theoretical analysis correlates adverse symptoms in clinical studies to contaminated study oats. SCIENCE ALERT 06/04/17 Evidence Emerges That Celiac Disease Could Be Triggered by a Seemingly Harmless Virus. PARLEMENT EUROPEEN - Réponse à question E-009318-15 European protocol for detecting coeliac disease. Studies have indicated that around 1% of the European population suffer from coeliac disease (an intolerance to gluten, which is present in a number of cereals such as wheat, barley and rye), yet only 10‐20% of those people have been correctly diagnosed. 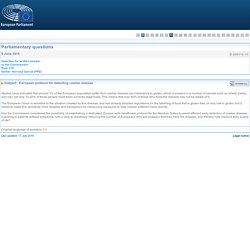 This means that over 80% of those who have the disease may not be aware of it. The European Union is sensitive to the situation created by this disease, and has already adopted regulations on the labelling of food that is gluten‐free, or very low in gluten, but it needs to make this sensitivity more tangible and transparent by introducing measures to help coeliac sufferers more directly. PARLEMENT EUROPEEN - Réponse à question E-008745-15 Discrimination and nutritional risks due to the high price of food for coeliac sufferers. One in every 80-100 citizens has coeliac disease. 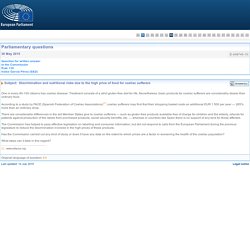 Treatment consists of a strict gluten-free diet for life. Nevertheless, basic products for coeliac sufferers are considerably dearer than ordinary food. According to a study by FACE (Spanish Federation of Coeliac Associations)(1), coeliac sufferers may find that their shopping basket costs an additional EUR 1 500 per year — 265% more than an ordinary shop. There are considerable differences in the aid Member States give to coeliac sufferers — such as gluten-free products available free of charge for children and the elderly, refunds for patients against production of the labels from purchased products, social security benefits, etc. — whereas in countries like Spain there is no support of any kind for those affected. Has the Commission carried out any kind of study or does it have any data on the extent to which prices are a factor in worsening the health of the coeliac population?

PARLEMENT EUROPEEN - Réponse à question E-012148-15 Prevalence of coeliac disease among Sahrawi refugees. Several studies show that the prevalence of coeliac disease caused by gluten intolerance among the population of Western Sahara is 6%, one of the highest in the world. This factor is of particular concern for Sahrawis who have been forced by Morocco’s illegal invasion to live in the refugee camps in Tindouf, in southern Algeria. They are dependent on humanitarian aid, and most of the food provided contains gluten. As a result, they are unable to follow the diet that currently offers the only effective treatment for people with this disease, which affects various organs such as the intestines, liver, thyroid gland, skin and reproductive system. Coeliacs who do not follow this diet face a greater risk of dying from the associated conditions, chiefly cancer — intestinal lymphoma, tongue and oesophageal cancer, etc. — as well as cardiovascular diseases and complications such as diabetes and osteoporosis.

The report, released by the Institute for Responsible Technology (IRT), cites U.S. Department of Agriculture data, U.S. Environmental Protection Agency records, medical journal reviews and international research. The authors say the data link GMOs to five conditions that either may trigger or exacerbate gluten-related disorders, including celiac disease, a serious autoimmune disorder: Intestinal permeabilityImbalanced gut bacteriaImmune activation and allergic responseImpaired digestionDamage to the intestinal wall Although wheat has been hybridized over the years, it is not a GMO, which can only be created by a laboratory process that inserts genetic material into plant DNA.

Glyphosate is a patented antibiotic that destroys beneficial gut bacteria. Dr. BMC 06/11/14 Early diagnosis of celiac disease in IgA deficient children: contribution of a point-of-care test. The diagnosis of CD is a challenge for many physicians. Unfortunately, up to 75% of CD remains undiagnosed, and the time between the onset of symptoms and diagnosis is often too long [20, 21]. It is thought that the use of a highly sensitive rapid point- of- care test, performed in primary care centers, may help physicians to rule out CD and to select patients on which more invasive diagnostic tests are required [22–24].

This strategy could allow a better and more reactive patient support, decreasing the time to diagnosis while increasing the patient quality of life. According to the last ESPGHAN guidelines, the initial testing of patients suspected of CD should be the serological identification of IgA autoantibodies against tTG, followed by biopsy in case of a positive serology [8]. Journal of AOAC International. 07/2011 Analytical methods for detection of gluten in food-method developments in support of food labeling legislation. PARLEMENT EUROPEEN - Réponse à question E-009318-15 European protocol for detecting coeliac disease.

WAGENINGEN UNIVERSITY 04/12/13 Prevalence of celiac disease in China higher than expected. In China, celiac disease is more common than has been reported, conclude researchers of Nanchang University (China), together with Dutch scientists of Wageningen UR (University & Research centre) and the University Medical Centre Groningen, within the framework of the Dutch Celiac Disease Consortium. They conducted the first systematic review and meta-analysis of the Chinese and international literature on celiac disease. Celiac disease was considered to be rare in China and it had not been studied thoroughly, despite the fact that China is the world’s largest wheat producer and has a high and rapidly increasing consumption of wheat and gluten-containing products. This increasing consumption carries concomitant risks for the development of celiac disease.

The results of this landmark study, which serves as a reference point for celiac disease in China, will be published on 4th December in the scientific journal PLOS ONE. LONDON SCHOOL OF ECONOMICS AND POLITICAL SCIENCE - 2012 - Resource use and costs associated with coeliac disease before and after diagnosis in 3,646 cases: results of a UK primary care database analysis. INFORMA 01/10/13 Evaluation of visual and taste preferences of some gluten-free commercial products in a group of celiac childre. EMAXHEALTH 19/08/11 Researchers stumped about the rise in celiac disease. Celiac disease, a gastrointestinal disorder characterized by an intolerance to gluten, a grain protein, is on the rise in the U.S. and no one is quite sure why.

But increasing amounts of people are being diagnosed yearly, prompting researchers to inquire as to the possible causes. According to one recent study, nearly five times as many people have celiac disease today than they did during the 1950s. Another report found that the rate of celiac disease has doubled every 15 years since 1974 and is now believed to affect one in every 133 U.S. residents. "It's quite widespread," said Dr. Alessio Fasano, director of the Center for Celiac Research and the Mucosal Biology Research Center at the University of Maryland School of Medicine. Researchers are testing a number of hypotheses about the new trend. The autoimmune attack damages the inner lining of the small intestine, compromising its ability to digest food and extract vital nutrients. The hypothesis has been voiced in allergy circles. LATVIA UNIVERSITY OF AGRICULTURE - 2012 - Annual 18th international scientific conference proceedings. Au sommaire: Consumers’ a.