THE UNIVERSITY OF WESTERN AUSTRALIA 12/04/17 Pathogen uses light to facilitate its invasion of wheat plants. Researchers at The University of Western Australia in collaboration with The Australian National University have discovered the deadly fungus Parastagonospora nodorum invades wheat plants by producing a herbicide compound (elsinochrome) which kills plant cells when they are exposed to light. 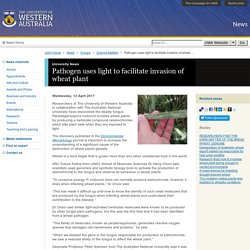 The discovery published in the Environmental Microbiology journal is important to increase the understanding of a significant cause of the destruction of wheat plants globally. Wheat is a food staple that is grown more than any other commercial food in the world. Int.J.Adv.Res.Biol.Sci.(2017).4(1):78-91 Effect of storage treatments on wheat storage. Asian J Agri Biol, 2016, 4(4): 126-133. FIELD EVALUATION OF DIFFERENT INSECTICIDES AGAINST WHEAT APHIDS AND THEIR NATURAL ENEMIES IN PAKISTAN. CIMMYT 15/08/16 Rapport annuel 2015. (organisme international de recherche traitant du maïs et du blé) Fieldwork in a large-scale investigation into gender norms and agency in agricultural innovation has been completed in 26 countries in Africa, Asia and Latin America. 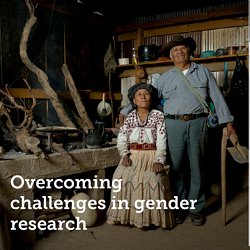 By applying the same qualitative research methodology in different farming communities around the world, a study known as GENNOVATE aims to draw broad lessons about how gender norms – social rules prescribing men’s and women’s daily behaviors – affect the uptake of agricultural innovations. In total, an estimated 8,000 men and women from 135 rural communities provided testimony that will guide efforts to better integrate gender in agricultural research and to design practical tools that can be used by researchers. GENNOVATE is a project carried out in conjunction with 11 CGIAR Research Programs. CRP MAIZE covered 27 communities in 7 countries, while WHEAT covered 48 communities in 8 countries. 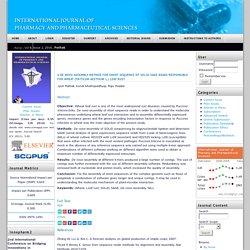 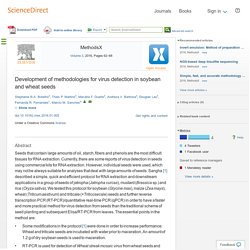 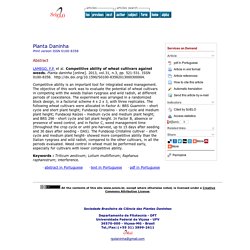 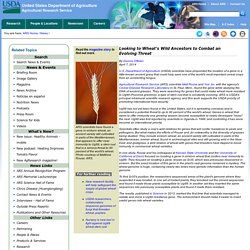 International Journal of Agronomy Volume 2012 (2012), Epidemiology of the Diseases of Wheat under Different Strategies of Supple. Natural Products and Bioprospecting - 2012 - Determination of the causes and the effects of storage conditions on the quality of. There are still cases of millers returning poor quality red wheat to the Zimbabwe Grain Marketing Board (GMB) and this has been an ongoing problem over the past few years. 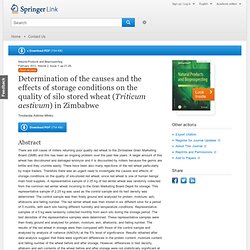 A larger amount of this wheat has discoloured and damaged embryos and it is discounted by millers because the germs are brittle and they crumble easily. There have been also many rejections of the red wheat particularly by major traders. Therefore there was an urgent need to investigate the causes and effects of storage conditions on the quality of silo-stored red wheat, since red wheat is one of human beings’ main food supplies. A representative sample of 2.25 kg of red winter wheat was randomly collected from the common red winter wheat incoming to the Grain Marketing Board Depot for storage. This representative sample of 2.25 kg was used as the control sample and its test density was determined. CROP PROTECTION - 2010 - The economics of fungicide use in winter wheat in southern Sweden. 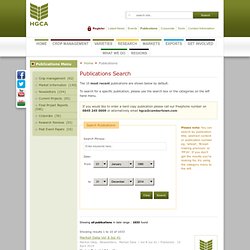 Historical Durability of Resistance to Wheat Diseases in Kansas W. 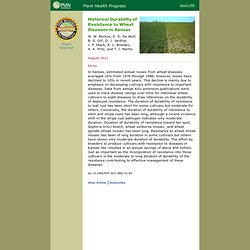 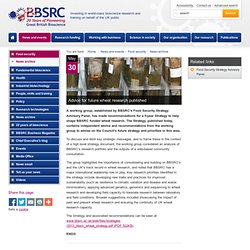 The Strategy, published today, contains independent advice and recommendations from the working group to advise on the Council's future strategy and priorities in this area. To discuss and distil key strategic messages, and to frame these in the context of a high level strategy document, the working group considered an analysis of BBSRC's research portfolio and the outputs of a web-based community consultation. The group highlighted the importance of consolidating and building on BBSRC's and the UK's track record in wheat research, and noted that BBSRC has a major international leadership role to play. The Strategy and associated recommendations can be seen at: www.bbsrc.ac.uk/web/files/strategies/2013_bbsrc_wheat_strategy.pdf (PDF 522KB)

AG PROFESSIONAL 20/08/13 UC Davis scientists deliver genetic blow to wheat disease. A new gene that will equip wheat plants to resist the deadly stem rust disease has been discovered by an international team that includes plant scientists at the University of California, Davis. The study findings on the Sr33 gene appear as the cover article of the Aug. 16 issue of the journal Science’s special issue devoted to “Smarter Pest Control.” This article is a companion piece to an article — also co-authored by UC Davis scientists — that reports the findings of another resistance gene, Sr35, which also confers immunity to wheat stem rust disease.

The research team, which included co-author Jan Dvorak, a professor and wheat geneticist at UC Davis, succeeded in cloning the Sr33 gene, known to exist in Aegilops tauschii, a wild relative of common bread wheat.