ANTIBIOTICS 11/10/21 Introduction to the Special Issue on Clostridioides difficile. All articles published by MDPI are made immediately available worldwide under an open access license. 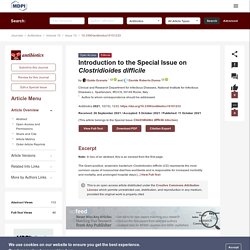 LA CLINICA TERAPEUTICA 14/02/19 Clostridium difficile. A review on an emerging infection. CONTAGIONLIVE 23/12/20 C. Difficile: Are We Making Progress? Clostridioides difficile is an anaerobic, spore-forming, toxin-producing gram-positive rod that has been identified as a cause of antibiotic-associated colitis. 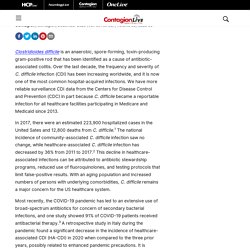 Over the last decade, the frequency and severity of C. difficile infection (CDI) has been increasing worldwide, and it is now one of the most common hospital-acquired infections. We have more reliable surveillance CDI data from the Centers for Disease Control and Prevention (CDC) in part because C. difficile became a reportable infection for all healthcare facilities participating in Medicare and Medicaid since 2013. The North American pulsed-field gel electrophoresis type 1 (NAP1) strain of C. difficile, also known as ribotype 027, is one of several described hypervirulent strains. The NAP1 strain has been implicated in outbreaks for almost 20 years.6 Most pathogenic strains of C. difficile produce two toxins, an enterotoxin tcdA and a cytotoxin tcdB. 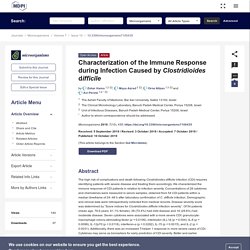 We characterized the immune response of CDI patients in relation to infection severity. Concentrations of 28 cytokines and chemokines were measured in serum samples, obtained from 54 CDI patients within a median timeframe of 24–48 h after laboratory confirmation of C. difficile infection. Demographic and clinical data were retrospectively collected from medical records. Disease severity score was determined by “Score indices for Clostridioides difficile infection severity”. Of 54 patients (mean age, 76.6 years, 61.1% female), 38 (70.4%) had mild disease and 16 (29.6%) had moderate disease. This is an open access article distributed under the Creative Commons Attribution License which permits unrestricted use, distribution, and reproduction in any medium, provided the original work is properly cited. 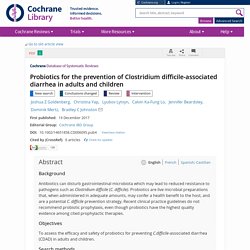 Antibiotics are among the most prescribed medications worldwide. Antibiotic treatment may disturb the balance of organisms that normally populate the gut. This can result in a range of symptoms, most notably, diarrhea. What are probiotics? Probiotics are live organisms (bacteria or yeast). thought to improve the balance of organisms that populate the gut, counteracting potential disturbances to the gut microbial balance that are associated with antibiotic use, and reducing the risk of colonization by pathogenic bacteria.

GEORGIA STATE UNIVERSITY - 2015 - Thèse en ligne : Effect of probiotics in the mitigation of Clostridium difficile associated disease. Toxins 2016, 8(5), 153; The Regulatory Networks That Control Clostridium difficile Toxin Synthesis. One of the most important groups of environmental cues that control toxin production is likely to be nutritional signals, such as carbon sources or certain amino acids. 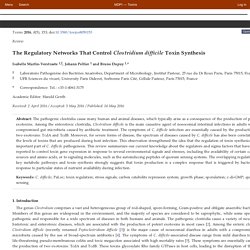 Different combinations of carbon sources that can be used by C. difficile to produce energy are available in culture media, which makes difficult the study of the detailed role of a particular substrate on toxin formation. It is likely that complex analysis to follow the temporal use and degradation pathways of the different carbon sources would help to further our knowledge of the regulatory network controlling toxin production [74]. However, despite this limit, addition of single substrates in culture media led to the emergence of an understanding of the associated regulatory mechanisms. 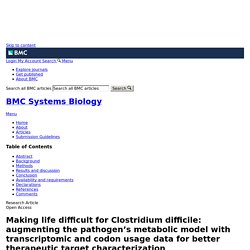 Clinical manifestations in humans range from asymptomatic colonization to mild diarrhea, pseudomembranous colitis, and death [1]. Infection by this bacterium is associated not only with significant patient morbidity and mortality, but also with a large economic burden for healthcare systems [2]. The primary risk factor for development of C. difficile infection among hospitalized patients is antibiotic use, which promotes toxicogenic C. difficile strains to proliferate, produce toxins, and induce disease [3]. Clinical Microbiology and Infection Available online 7 February 2018 New insights into transmission of Clostridium difficile infection—narrative review. JavaScript is disabled on your browser. 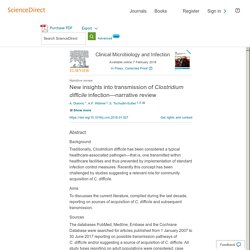 Please enable JavaScript to use all the features on this page. Abstract Background Traditionally, Clostridium difficile has been considered a typical healthcare-associated pathogen—that is, one transmitted within healthcare facilities and thus prevented by implementation of standard infection control measures. Recently this concept has been challenged by studies suggesting a relevant role for community acquisition of C. difficile. Aims To discusses the current literature, compiled during the last decade, reporting on sources of acquisition of C. difficile and subsequent transmission. 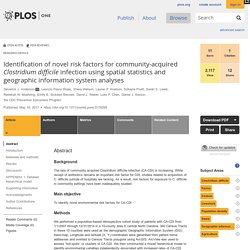 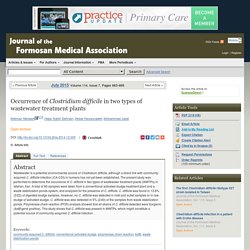 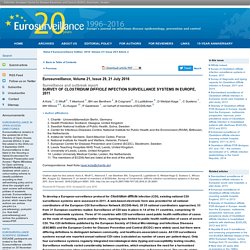 BELGIAN INFECTION CONTROL SOCIETY / INSTITUT SCIENTIFIQUE DE SANTE PUBLIQUE - SEPT 2011 - Surveillance des infections à Clostrid. ANAEROBE 29/09/10 Analysis of prevalence, risk factors and molecular epidemiology of Clostridium difficile infection in Kuwait o. Abstract We conducted a prospective study to evaluate the prevalence and epidemiology of CDI in Kuwait government hospitals over a 3-year period, January 2003 to December 2005, to determine the ribotypes responsible for CDI and to estimate the prevalence of ribotype 027. We also conducted a case-control study to identify the risk factors in our patient population. A total of 697 stool samples from patients with suspected CDI were obtained and sent to Anaerobe Reference Laboratory, Faculty of Medicine, Kuwait University for Clostridium difficile toxin detection, culture and PCR ribotyping. During the period, 73 (10.5%) out of 697 patients met the case definition of CDI.

Of these, 56 (76.7%) were hospital-acquired and 17 (23.3%) were from outpatient clinics. Keywords. Zoonoses and Public Health 24/09/10 The Ecology and Pathobiology of Clostridium difficile Infections: An Interdisciplinary Chall. STATENS SERUM INSTITUT (Danemark) - MAI 2010 - Clostridium difficile increase. About diseases and vaccines. WIKIPEDIA ANGLOPHONE - Clostridium difficile. C. difficile infection (CDI) is a growing problem in healthcare facilities. Outbreaks occur when humans accidentally ingest spores in a medical facility.

The infection kills 14,000 people a year in America alone.[5] When the bacteria are in a colon in which normal gut flora has been destroyed (usually after a broad-spectrum antibiotic such as clindamycin has been used), the gut becomes overrun with C. difficile. The bacteria release toxins that can cause bloating and diarrhea, with abdominal pain, which may become severe. Latent symptoms of C. difficile infection often mimic some flu-like symptoms and can mimic disease flare in patients with inflammatory bowel disease-associated colitis.[6] Mild cases of C. difficile infection can often be cured by discontinuing the antibiotics. In more serious cases, oral administration of oral metronidazole, vancomycin, intravenous metronidazole successively may be prescribed. Signs and symptoms[edit]