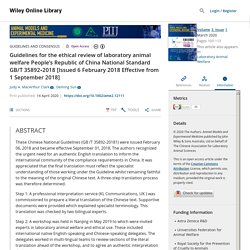 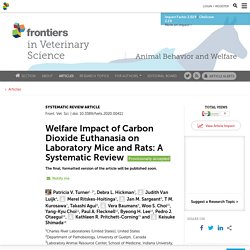 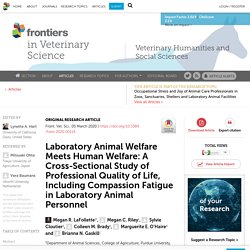 Many laboratory animal personnel are responsible for directly or indirectly caring for laboratory animals and often form attachments with them (1). While taking care of these animals, personnel may also perform or view procedures that cause pain and distress as part of the experiment—which alone could lead to occupational or perpetration-induced traumatic stress (2, 3). Then, at the end of a study, laboratory animals are often euthanized—sometimes by their caretaker without the choice to pass this responsibility to another worker—either to collect tissues for analysis, because they cannot be used in other studies for scientific reasons, or because they cannot be adopted out. VIB_BE 03/12/19 Belgian researchers commit to more transparency about animal testing. Belgium is internationally renowned for pioneering biological and biomedical research. 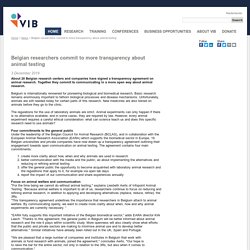 Basic research remains enormously important to fathom biological processes and disease mechanisms. Unfortunately, animals are still needed today for certain parts of this research. New medicines are also tested on animals before they go to the clinic. The regulations for the use of laboratory animals are strict. Animal experiments can only happen if there is no alternative available, and in some cases, they are required by law.

Four commitments to the general public. TOXINS 15/12/18 Alternative to Animal Use for Detecting Biologically Active Staphylococcal Enterotoxin Type A. 1. 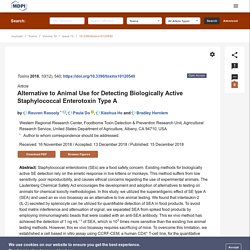 Introduction Staphylococcus aureus is a prevalent bacterial pathogen causing foodborne diseases that affect about a quarter million people every year in the United States (US) [1]. Pathogenesis is brought about, most notably, by virulence factors comprising some twenty-three different staphylococcal enterotoxins (SEs) produced by S. aureus and which are involved in food poisoning. These toxins affect the gastrointestinal tract, induce emesis, and activate the immune system by binding to the major histocompatibility complex (MHC) class II molecules of antigen presenting cells (APC).

Regulatory Toxicology and Pharmacology Volume 110, February 2020, State of the science on alternatives to animal testing and integration of testing strategies for food safety assessments: Workshop proceedings. 1. 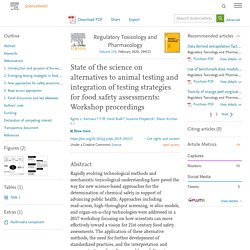 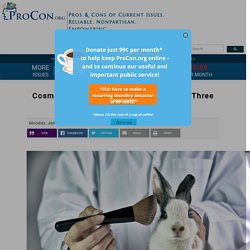 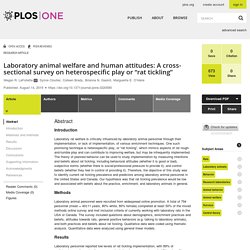 One such promising technique is heterospecific play, or “rat tickling”, which mimics aspects of rat rough-and-tumble play and can contribute to improving welfare, but may be infrequently implemented. PHYS_ORG 17/07/19 Animal experimentation in research: between animal welfare and scientific quality. In animal experimentation in research, it is important to ensure both the highest scientific quality and high animal welfare standards, yet in practice, this can lead to interdependencies and conflicts. 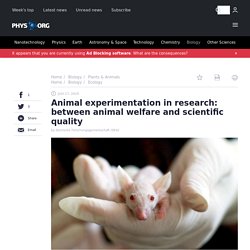 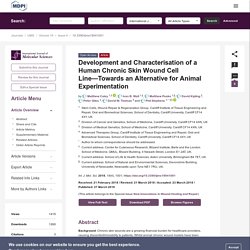 Whilst animal chronic wound models have been developed to allow for mechanistic studies and to develop/test potential therapies, such systems are not good representations of the human chronic wound state. As an alternative, human chronic wound fibroblasts (CWFs) have permitted an insight into the dysfunctional cellular mechanisms that are associated with these wounds. However, such cells strains have a limited replicative lifespan and therefore a limited reproducibility/usefulness. INTECH 27/06/18 Alternatives to Animal Experimentation: Its Institutional Teaching and Scientific. 1. Introduction The research is focused today on the ethical, logistical, economic, scientific, and legal requirements. At the European level, Directive 2010/63 of the European Parliament and of the Council of September 22, 2010, on the protection of animals used for scientific purposes [1] must be highlighted, which is translated into Spanish legislation by Royal Decree 53/2013 [1, 2].

HUMANE SOCIETY INTERNATIONAL 23/10/19 Humane Society International and Japanese Coalition for Animal Welfare question future of animal experimentation in new report. TOKYO—Marking the 60th anniversary of the ‘3Rs’ principle of replacement, reduction and refinement of animals in science, the Japanese Coalition for Animal Welfare and Humane Society International have launched a new report, “Reconsidering the Future of Animal Experimentation,” featuring articles by experts on this issue, such as researchers on non-animal alternatives and lab animal scientists. JCAW and HSI have been collaborating to engage regulatory authorities and policymakers for the revision of Japan’s Animal Welfare Act (AWA), which just passed this year.

The revised AWA includes a supplementary provision that states that stakeholders will continue discussions on and review lab animal related issues. The two organizations will continue to work together to engage stakeholders and raise public awareness beyond this revision. JCAW representative Dr. FRONT. NEUROANAT 28/05/19 Animal Models and Animal Experimentation in the Development of Deep Brain Stimulation: From a Specific Controversy to a Multidimensional Debate.

Introduction Deep brain stimulation (DBS) appears to be one of the major neuroscientific therapeutic innovations of the last 30 years (Sackeim and George, 2008; Insel, 2013). Considering its therapeutic effects and the scientific perspectives it opens up, the technology is stirring the interest of public policies (Gorman, 2013), industry (Aranzazu and Cassier, 2019) and the media (Racine et al., 2007; Gilbert and Ovadia, 2011). High-frequency DBS delivers electrical impulses to specific areas of the brain by way of implanted electrodes connected to a battery-operated neurostimulator unit placed in the chest. Producing spectacular effects on the motor symptoms in essential tremor and Parkinson’s disease, DBS offers treatment perspectives for serious, treatment-resistant disorders in neurology and psychiatry (Lozano et al., 2019). This approach appears to be instructive for two reasons.

The characterization of these exchanges can, of course, be questioned. EUROGROUPFORANIMALS 13/11/17 COMMISSION REVIEW OF ANIMAL EXPERIMENTATION LAW HIGHLIGHTS SCOPE FOR DELIVERING IMPROVEMENTS ON ANIMAL WELFARE. A recent Commission review on the animal experimentation Directive stresses the importance of unleashing its potential to seriously replace, reduce and refine (3Rs) the use of animals for testing, research or educational purposes. [1] The main concerns highlighted in the report include a need for improving the efficiency, effectiveness and consistency of project evaluation and authorisation processes before animals are used. The report also highlights the need for more transparency of information about the use of animals. Furthermore the review identifies the need to ensure high standards of relevant education and training as a means to ensure optimal uptake of the 3Rs. Key factors hindering fuller implementation of the 3Rs and use of alternatives are identified as a lack of knowledge, insufficient communication, the acceptance of alternatives and financial aspects.

Contacts: Lucy Mathieson, Communications Officer, Eurogroup for Animals, Email: l.mathieson@eurogroupforanimals.org. EUREKALERT 17/06/19 Robotic fish to replace animal testing. The artificial fish surrogates should provide information about the flow conditions and expected damage and mortality of fish traveling through turbine installations. To date, up to 450,000 fish are used every year in live animal experiments in German hydroelectric power plants, according to the Federal Institute for Risk Assessment. Those tests, mandated by domestic regulation which enacts a European directive, evaluate the ability of the fish to pass through the turbines and thus assess the fish-friendliness of the plants. The RETERO research project, "Reducing animal testing to establish risk of injury to fish caused by passage through turbines by the use of robotic surrogates, computational fluid mechanics and predictive modeling", is funded by the German Federal Government with 1.4 million euros, and started in March 2019.

ENVIRONMENTAL TOXICOLOGY AND CHEMISTRY 09/10/19 Comparative Assessment of the Sensitivity of Fish Early‐Life Stage, Daphnia, and Algae Tests to the Chronic Ecotoxicity of Xenobiotics: Perspectives for Alternatives to Animal Testing. Classification and labeling of industrial chemicals, biocides, and plant protection products are conducted for acute and long‐term aquatic hazards to aquatic life, as requested by the Global Harmonization System for classification and labeling of chemicals (United Nations 2011) and its European application (Regulation (EC) No 1272/2008 on classification, labelling and packaging of substances and mixtures; European Commission 2008).

It is headed by Drugs Controller General (India), headquartered in New Delhi. The vision of CDSCO is to protect and promote public health in India. It has as mission “to safeguard and enhance public health by assuring the safety, efficacy and quality of drugs, cosmetics and medical devices”. Each of the 29 States and 7 Union Territories of India has its own Drug Control Authority (SDCA) headed by the Drug Controller/Commissioner/Director, who is responsible for discharging regulatory functions assigned under the provisions of the Drugs and Cosmetics Act, 1940, and Drugs and Cosmetics Rules, 1945. The Bureau of Indian Standards (BIS) is a statutory organization under the Bureau of Indian Standards Act, 1986. ALTERNATIVES TO ANIMAL EXPERIMENTATION - 2018 - Giving meaning to alternative methods to animal testing. Cienc. Rural vol.48 no.8 Santa Maria 2018 Epub July 23, 2018 Animal welfare in experimental orthopedic surgery of dogs: an analysis of the Brazilian view. PLOS 14/08/19 Laboratory animal welfare and human attitudes: A cross-sectional survey on heterospecific play or "rat tickling".

SAGE JOURNALS 17/07/18 New Technologies as a Neglected Social Movement Outcome: The Case of Activism against Animal Experimentation. UNIVERSITY OF KONSTANZ - 2017 - Opinion versus evidence for the need to move away from animal testing. Technological Forecasting and Social Change Volume 118, May 2017, How institutional logics hamper innovation: The case of animal testing. FRONTIERS BLOG 14/03/18 Top prize for article on computer model that could replace animal testing.

By using human data, rather than animal data, the model improves how test results translate to humans and reduces the need for animal experimentation. Image: Shutterstock New software predicts the clinical risk of drug-induced side effects for the heart with higher accuracy than animal experiments. Cosmetics 2017, 4(3), 30; Alternative Methods to Animal Testing for the Safety Evaluation of Cosmetic Ingredients: An Overview.

WAGENINGEN UNIVERSITY 07/10/15 Innovative neuron test detects unknown marine toxins and can replace animal testing. Marine toxins are toxins produced naturally by algae. Shellfish such as mussels that feed on algae, can accumulate these toxins in their bodies. When a human or animal consumes contaminated shellfish, various symptoms of poisoning can occur, such as memory loss, abdominal cramps, diarrhoea or paralysis. Mice testing To test whether shellfish are free of such marine toxins, both chemical tests and, in most parts of the world, mice tests are used. In the mice test (which is not used in the Netherlands), an extract of the shellfish is injected into the mouse’s abdominal cavity.

Neuronal cell line Nicolas’s research initially focused on toxins that can cause paralysis, called neurotoxins. VIB_BE 05/03/15 European researchers point to the importance of animal testing. Page Content Zone 1 More than hundred European scientific organizations, including VIB, oppose the citizens’ initiative Stop Vivisection to ban all research using animals in Europe. With the support of these scientific organizations the Wellcome Trust (UK) has issued a clear statement which specifies that animal experimentation is still unavoidable to enable important breakthroughs in biomedical research. VETERINARY RECORD - 2015 - One Health: a concept led by Africa, with global benefits. ONE Health evolved from the recognition that an interdisciplinary approach is required to understand complex health problems, and that the health of humans and animals are inextricably linked.

Through closer cooperation between the human, veterinary and environmental health sectors, added value, in terms of health metrics, cost savings and environmental services is achievable. Although the One Health concept has been recognised for many years, particularly since the seminal work of Calvin Schwabe (Schwabe 1984), many challenges remain in making it operational. Regulatory Toxicology and Pharmacology Volume 73, Issue 1, October 2015, Knowledge sharing to facilitate regulatory decision-making in regard to alternatives to animal testing: Report of an EPAA workshop. Regulatory Toxicology and Pharmacology. 04/2010; A tiered approach to the use of alternatives to animal testing for the safety assessment of cosmetics: genotoxicity. A COLIPA analysis. Regul Toxicol Pharmacol.

J Am Assoc Lab Anim Sci. 2015 Mar; 54(2): 209–213. The European Partnership for Alternative Approaches to Animal Testing (EPAA): Promoting Alternative Methods in Europe and Beyond. Réponses parlementaires Européennes. BIOMED CENTRAL BLOG 27/02/15 Reducing publication bias in animal research A workshop on publication bias in animal research reveals the importance of publishing negative results and the role of preclinical study registration. But is there a one-size solut. BIOME 23/02/15 Making the most of animal research: from meta-analysis to trial registration. MAFNZ 28/06/11 Auckland scientist wins award for reducing animal testing.

MEDIATEUR EUROPEEN 11/12/14 Décision : Unnecessary tests on animals by registrants of chemical substances. PLOS 06/06/14 The Need for Randomization in Animal Trials: An Overview of Systematic Reviews. North-West University - Dec 2012 - Dissertation en ligne : Animal welfare and the law: towards legal regulation of the welfare of laboratory animals in South Africa. FDA 10/06/14 Product Testing. NIH_GOV 07/10/14 Alternatives to Animal Testing - Questions and Answers about ICCVAM. Environments 2014, 1, 14-30 Review of Evidence of Environmental Impacts of Animal Research and Testing.