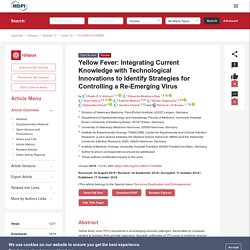 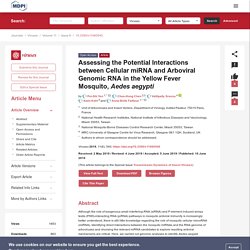 Identifying direct interactions between the mosquito miRNAs and the RNA genome of arboviruses and choosing the relevant miRNA candidates to explore resulting antiviral mechanisms are critical. Here, we carried out genomic analyses to identify Aedes aegypti miRNAs that potentially interact with various lineages and genotypes of chikungunya, dengue, and Zika viruses.

By using prediction tools with distinct algorithms, several miRNA binding sites were commonly found within different genotypes/and or lineages of each arbovirus. ►▼ Show Figures Figure 1 ►▼ Show Figures Figure 1. VACCINES 08/11/19 Disease Resurgence, Production Capability Issues and Safety Concerns in the Context of an Aging Population: Is There a Need for a New Yellow Fever Vaccine? More than 900 million people reside in 35 African and 13 Central and South American countries where there is high to moderate risk of YFV transmission [33]. 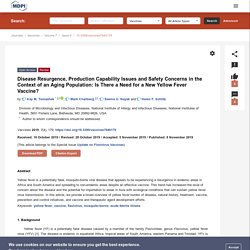 While the last estimate of YF incidence and mortality is from 1992 [34], 90% of YF cases reported to WHO via passive surveillance are still from Africa. One recent study estimated that there were 130,000 (95% CI 51,000–380,000) YF cases with fever and jaundice or hemorrhage in 2013, including 78,000 (95% CI 19,000–180,000) deaths in Africa [35]. In endemic areas of Africa, natural immunity accumulates with age, thereby putting infants and children at highest risk. In the Americas, the annual reported incidence of YF is typically less than 500 cases with the exception of 524 cases in 1995, 825 cases in 2017, and 1401 cases in 2018 [4,36]. Traditionally, most cases in the Americas were reported among unimmunized men thought to be exposed to YFV-infected mosquitoes while working in forested areas. TROPICAL DISEASES, TRAVEL MEDICINE AND VACCINES 10/01/20 Yellow fever control: current epidemiology and vaccination strategies. Mem. Inst. Oswaldo Cruz vol.114 Rio de Janeiro 2019 Epub Apr 29, 2019 Combination of surveillance tools reveals that Yellow Fever virus can remain in the same Atlantic Forest area at least for three transmission seasons. 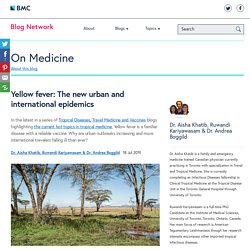 It is found in 29 countries of sub-Saharan Africa and 13 in South America, resulting in 200,000 cases and 30,000 deaths in endemic areas. Transmission often occurs when humans encroach jungle borders for work or leisure activities. But recently, urban outbreaks have led to the international transmission of yellow fever outside its usual boundaries. Although in 80–90% of cases, yellow fever is only a mild infection with symptoms of fever, headache, chills, muscle pain, fatigue, loss of appetite, nausea, and vomiting lasting for less than a week, for the remaining ~15% of cases, the fever can lead to severe clinical symptoms, including jaundice, hemorrhage, shock, and organ failure. EUREKALERT 14/08/19 The risk of death from yellow fever can be detected sooner.

Approximately ten out of every 100 people who are bitten by mosquitos infected by the yellow fever virus develop symptoms of the disease. 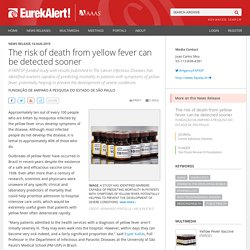 Although most infected people do not develop the disease, it is lethal to approximately 40% of those who do. VIRUSES 10/06/19 Assessing the Potential Interactions between Cellular miRNA and Arboviral Genomic RNA in the Yellow Fever Mosquito, Aedes aegypti. MEDICAL XPRESS 27/04/18 Researchers map the potential spread of yellow fever virus to cities around the world. The deadly yellow fever virus has the potential to spread into cities around the world where it previously hasn't been seen, according to a new study led by St. 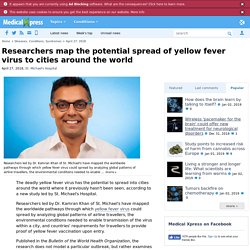 Michael's Hospital. Researchers led by Dr. Kamran Khan of St. Michael's have mapped the worldwide pathways through which yellow fever virus could spread by analyzing global patterns of airline travellers, the environmental conditions needed to enable transmission of the virus within a city, and countries' requirements for travellers to provide proof of yellow fever vaccination upon entry.

Published in the Bulletin of the World Health Organization, the research does not model a particular outbreak, but rather examines the potential spread for yellow fever virus to spread between the world's cities. "Imagine a yellow fever outbreak as a fire," said Dr. MEDICAL XPRESS 23/08/18 Tracking the evolution and transmission of yellow fever. A pioneering Oxford University research collaboration into yellow fever virus (YFV) has shed new light on the exceptional recent outbreak in Brazil and how the virus spreads. 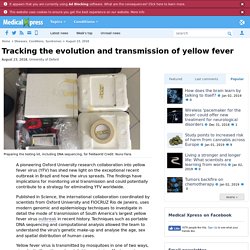 The findings have implications for monitoring viral transmission and could potentially contribute to a strategy for eliminating YFV worldwide. Published in Science, the international collaboration coordinated by scientists from Oxford University and FIOCRUZ Rio de Janeiro, uses modern genomic and epidemiology techniques to investigate in detail the mode of transmission of South America's largest yellow fever virus outbreak in recent history. Techniques such as portable DNA sequencing and computational analysis allowed the team to understand the virus's genetic make-up and analyse the age, sex and spatial distribution of human cases.

Yellow fever virus is transmitted by mosquitoes in one of two ways, via sylvatic (forest) or urban (city) transmission. Dr. Journal of Venomous Animals and Toxins including Tropical Diseases 25/08/18 Yellow fever in Africa and the Americas: a historical and epidemiological perspective. Brazil has experienced an exceptional yellow fever (YF) outbreak since December 2016 (Table 1). 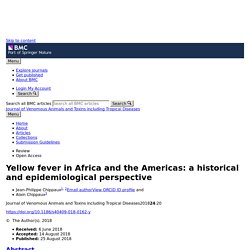 After the last major epidemic (1935–1940), sporadic cases were regularly reported from endemic states – mainly the Amazonian states – with some incursions into those of the Southeast (Minas Gerais and São Paulo, respectively in 2002 and 2008) and South (Paraná and Rio Grande do Sul in 2008), until today (Fig. 1). Preceded by an upsurge of epizootics in monkeys since 2014 [1], the current epidemic resulted, from 1 December 2016 to 8 May 2018, in 2050 confirmed cases of yellow fever including 681 deaths, indicating a case fatality rate of 33.2% (Fig. 2), while a further 1300 cases are still under investigation [2]. 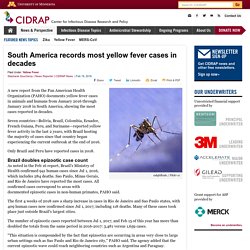 Seven countries—Bolivia, Brazil, Colombia, Ecuador, French Guiana, Peru, and Suriname—reported yellow fever activity in the last 2 years, with Brazil hosting the majority of cases since that country began experiencing the current outbreak at the end of 2016. Only Brazil and Peru have reported cases in 2018. Brazil doubles epizootic case count As noted in the Feb 16 report, Brazil's Ministry of Health confirmed 941 human cases since Jul 1, 2016, which includes 284 deaths. Sao Paulo, Minas Gerais, and Rio de Janeiro have reported the most cases. The first 4 weeks of 2018 saw a sharp increase in cases in Rio de Janeiro and Sao Paulo states, with 409 human cases now confirmed since Jul 1, 2017, including 118 deaths. Vaccine campaign despite anti-vaccine activity. Bull World Health Organ 2018;96:343–354B International travel between global urban centres vulnerable to yellow fever transmission. EUROSURVEILLANCE 06/09/18 Yellow fever cases in French Guiana, evidence of an active circulation in the Guiana Shield, 2017 and 2018. 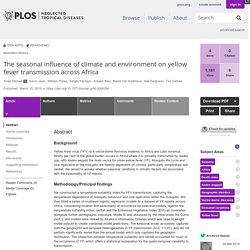 Ninety per cent of the global burden occurs in Africa where it is primarily transmitted by Aedes spp, with Aedes aegypti the main vector for urban yellow fever (YF). Mosquito life cycle and viral replication in the mosquito are heavily dependent on climate, particularly temperature and rainfall. We aimed to assess whether seasonal variations in climatic factors are associated with the seasonality of YF reports. Methodology/Principal findings We constructed a temperature suitability index for YFV transmission, capturing the temperature dependence of mosquito behaviour and viral replication within the mosquito. Conclusions/Significance The description of seasonality offers an explanation for heterogeneities in the West-East YF burden across Africa. Author summary Editor: Waleed Saleh Al-Salem, Saudi Ministry of Health, SAUDI ARABIA. PLOS 17/08/17 Assessment of risk of dengue and yellow fever virus transmission in three major Kenyan cities based on Stegomyia indices.

INTERNATIONAL JOURNAL OF INFECTIOUS DISEASES - 2017 - Yellow Fever importation to China – a failure of pre- and post-travel control systems? PLOS 08/09/17 Geographic patterns and environmental factors associated with human yellow fever presence in the Americas. Abstract Background In the Americas, yellow fever virus transmission is a latent threat due to the proximity between urban and wild environments. Although yellow fever has nearly vanished from North and Central America, there are still 13 countries in the Americas considered endemic by the World Health Organization. Human cases usually occur as a result of the exposure to sylvatic yellow fever in tropical forested environments; but urban outbreaks reported during the last decade demonstrate that the risk in this environment still exists. The objective of this study was to identify spatial patterns and the relationship between key geographic and environmental factors with the distribution of yellow fever human cases in the Americas.

Lancet Glob Health. 2018 Feb 1. Existing and potential infection risk zones of yellow fever worldwide: a modelling analysis. Parasites & Vectors 29/12/17 Dengue and yellow fever virus vectors: seasonal abundance, diversity and resting preferences in three Kenyan cities. Mosquito abundance and composition A total of 12,937 mosquitoes representing 6 genera and 25 species were captured throughout the survey from the three cities using the BG-Sentinel traps (Table 1). Aedes aegypti was the most dominant DENV/YFV vector represented across all the cities and seasons except for Nairobi where Aedes tricholabis dominated collections during the long-rains.

Kilifi had a wider Aedes species representation (9 spp.) and Mansonia was primarily encountered in Kisumu, especially in the long-rains and dry season. Collections of Culex species were generally low; dominated by Culex pipiens and Culex univittatus in Kisumu during the long-rains, and wider species representation (10 species) in Nairobi. Culex rubinotus was limited to Kilifi, Culex poicilipes to Kisumu and Culex zombaensis to Nairobi, although in low numbers.

Total mosquito abundance was significantly higher in Kisumu than Kilifi (Estimate = 0.593 ± 0.29, t = 2.08, P = 0.043). Resting preferences. JOURNAL OF VECTOR ECOLOGY 10/11/17 History of the discovery of the mode of transmission of yellow fever virus. The quest for the mode of transmission of yellow fever occurred during the last three decades of the nineteenth century. Early reviews of progress through that time were based on original articles published by individuals engaged in that endeavor. Surprisingly, they accorded merit where it was not fully due. Those accounts were further complicated by inter-country frictions of the time. An historically based, detailed and critical study of the period and the events, entitled, as noted above, Histoire de la fièvre jaune. Naissance de la médicine tropicale, was written by François Delaporte and published in Paris in 1989. Lancet Infect Dis. 2017 Nov;17(11):1209-1217. Global yellow fever vaccination coverage from 1970 to 2016: an adjusted retrospective analysis.

INTERNATIONAL JOURNAL OF INFECTIOUS DISEASES - 2017 - Yellow Fever importation to China – a failure of pre- and post-travel control systems? Both these situations may facilitate the importation of yellow fever to vulnerable areas. Workers for large international firms in Africa are vulnerable for infectious diseases such as yellow fever and malaria and need to be protected and have adequate pre-travel preparations. JOURNAL OF INFECTION - OCT 2016 - Yellow fever virus: Increasing imported cases in China. Medicina Clínica (English Edition) Volume 147, Issue 11, 2 December 2016, Is the re-emergence of yellow fever a new global public health threat? International Journal of Infectious Diseases Volume 48, July 2016, Yellow fever cases in Asia: primed for an epidemic.

Parasites & Vectors 2013, 6:331 (18 November 2013) Yellow fever disease: density equalizing mapping and gender analysis of international research output. Considering the entire time frame of the study, there is an increasing interest in the field of yellow fever, reflected by the highest number of publications already in the early years of the 20th century. However, there is, despite of the overall lower level an slight increase in the amount of publications until 2010. How can we explain this increased scientific interest in the early years of the 20th century, this rapid increase in scientific publications and this development of literature during this period? ECDC 30/03/16 Assessment of the yellow fever outbreak in Angola shows risk of infection for unvaccinated travellers and further international spread. OMS - 2015 - Countries with risk of yellow fever transmission and countries requiring yellow fever vaccination.