FISH FARMER 23/10/20 Gene editing project could help build Atlantic salmon’s resistance to lice. Researchers at Norwegian institute Nofima are investigating whether gene editing could provide an answer to the problem of sea lice. 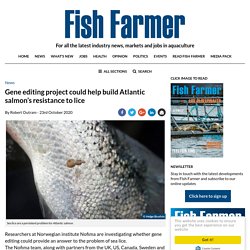 The Nofima team, along with partners from the UK, US, Canada, Sweden and Australia, will be using the gene editing technology CRISPR to try and build resistance to lice into Atlantic salmon. They believe that genetic differences between Atlantic and Pacific salmon could explain why several species of the latter are unattractive as hosts for sea lice “It is no exaggeration that the knowledge we create in this new project could transform the Norwegian aquaculture industry if Atlantic salmon can be made to be highly or completely resistant to lice”, said senior researcher and project leader Nick Robinson in Nofima. BMC Biotechnol. 2020; 20: 35. Efficient CRISPR/Cas9 genome editing in a salmonid fish cell line using a lentivirus delivery system. NATURE 20/02/19 Gene-edited animal creators look beyond US market - Tired of regulatory confusion and a lack of funding, some US researchers are taking their gene-edited livestock abroad.

In a few weeks, reproductive biologist Charles Long will travel from Texas to São Paulo, Brazil in search of collaborators willing to take on his studies of gene-edited cattle.

He is reluctant to ship the project away from his laboratory at Texas A&M University in College Station. But after 20 years of struggling to win US government funding for his research, Long says that he is done. “We’ve essentially given up,” he says. “I’m going to move the entire damn project down there.” US researchers who develop genetically engineered livestock have long dealt with a dearth of research funding and an uncertain path to market. But in 2017, the FDA released draft guidance that suggested it will regulate gene-edited animals, too, as ‘animal drugs’. FISHSITE 23/10/20 Can CRISPR edit sea lice out of salmon aquaculture? While innovation in the salmon industry and strict rules have helped to reduce the severity of lice infestation on farms, welfare and environmental issues have been raised about the regular treatment methods and lice cost the salmon sector in Norway alone NOK 5 billion a year. 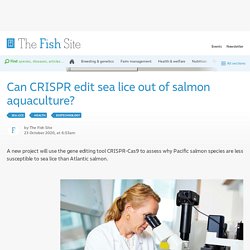 However, the new project aims to apply the gene editing tool that recently won the Nobel Prize for chemistry in a way that could make farmed salmon an unattractive host for sea lice. “It is no exaggeration that the knowledge we create in this new project could transform the Norwegian aquaculture industry, if Atlantic salmon can be made to be highly or completely resistant to lice,” says project leader Nick Robinson, from Nofima. He has extensive experience of genetic and breeding research on disease resistance in aquatic species farmed worldwide. Why gene editing? XINHUA 06/02/17 Norway mulls approving method of producing genetically modified salmon. OSLO, Feb. 5 (Xinhua) -- The Norwegian Biotechnology Council is considering whether to approve the method of producing genetically modified type of salmon, newspaper Aftenposten reported on Sunday. 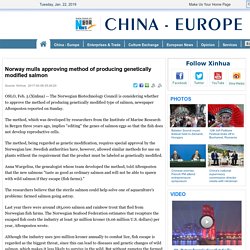 The method, which was developed by researchers from the Institute of Marine Research in Bergen three years ago, implies "editing" the genes of salmon eggs so that the fish does not develop reproductive cells. The method, being regarded as genetic modification, requires special approval by the Norwegian law. Swedish authorities have, however, allowed similar methods for use on plants without the requirement that the product must be labeled as genetically modified. Anna Wargelius, the genealogist whose team developed the method, told Aftenposten that the new salmons "taste as good as ordinary salmon and will not be able to spawn with wild salmon if they escape (fish farms).

" CBC 07/09/18 Maker of GMO salmon says it sold 4.5 tonnes in Canada this year but won't say to whom. Prepared sashimi products are where you're likely to find genetically modified salmon in Canada, the CEO of AquaBounty Technologies, a Massachusetts-based biotechnology company that produces the fish, told investors Thursday. 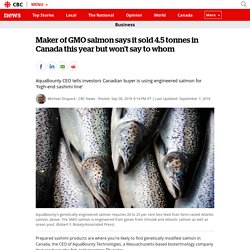 Ron Stotish wouldn't say exactly who is buying the company's product but did tell a group of investors meeting in New York that it has sold 4.5 tonnes of it in Canada so far this year. This is on top of the roughly nine tonnes that were sold last year.​ There is no requirement in Canada for the fish to be labelled as genetically engineered, so unless the company does it voluntarily there is no way for customers to tell the difference between non-GMO salmon and AquaBounty's product. "The people who bought our fish were very happy with it," Stotish told the investors. "They put it in their high-end sashimi lines, not their frozen prepared foods. " Global aquaculture advocate March/April 2011 Genetically Modified Salmon Fast-Growing Fish Could Safely Deliver Healthy Seafood.

NATURE BIOTECHNOLOGY 06/08/18 GM salmon to be raised on Indiana farm. INDIANAPUBLICMEDIA 10/08/18 The First GMO Fish For Human Consumption Will Be Produced In Indiana. Aquabounty Technologies President & CEO Ronald Stotish, reporter Samantha Horton, and facility manager Pablo Bernal tour the building where the large 68,684 gallon tanks are housed. (Steve Burns, WFIU/WTIU News) The first genetically-modified animal for human consumption could be arriving in grocery stores across the United States as early as next year. Massachusetts-based AquaBounty Technologies has developed a biotech salmon that it plans to grow near no major body of water, in a production facility in the small town of Albany, Indiana. The company producing the breed of high-tech fish hopes to change the aquaculture industry. As unlikely as the location is, the fish is just as unusual. ISB - OCT 2010 - Risk Assessment and Mitigation of AquAdvantage Salmon. Aqua Bounty Technologies, Inc. has recently applied for deregulation of AquAdvantage salmon — salmon that have been genetically engineered to grow faster than wild-type salmon. 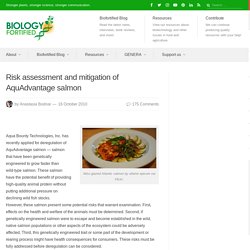 These salmon have the potential benefit of providing high-quality animal protein without putting additional pressure on declining wild fish stocks. However, these salmon present some potential risks that warrant examination. First, effects on the health and welfare of the animals must be determined. BBC 01/08/18 Salmon fed genetically modified plants in nutrition trial Researchers are feeding farmed salmon a genetically modified plant to see if it boosts omega-3 levels, which have fallen over the past decade. RT 10/08/17 ‘Guinea pig’ Canadians offered ‘world’s first’ GMO salmon. Food safety activists and environmentalists are concerned over the potential risks from a new US brand of genetically-modified salmon, which has just hit Canadian shelves. 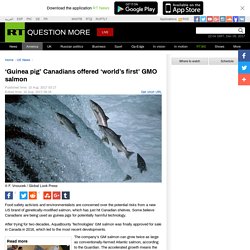 Some believe Canadians are being used as guinea pigs for potentially harmful technology. After trying for two decades, AquaBounty Technologies’ GM salmon was finally approved for sale in Canada in 2016, which led to the most recent developments. Read more The company’s GM salmon can grow twice as large as conventionally-farmed Atlantic salmon, according to the Guardian. 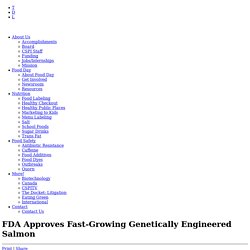 We agree with the Food and Drug Administration’s assessment that the AquAdvantage salmon is safe to eat and is nutritionally equivalent to non-genetically engineered salmon. That the salmon’s safety has been affirmatively determined by the agency puts it in contrast to the genetically engineered crops on the market. While the current GE crops grown in the U.S., too, are perfectly safe to eat, developers of GE crops have only been subject to the FDA’s voluntary consultation process where the agency reviews safety data, but does not provide a ruling that foods and ingredients from the crops are safe. 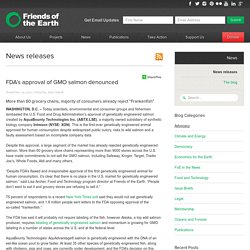 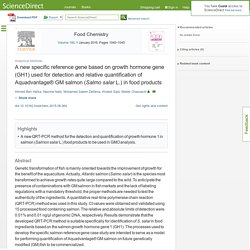 Abstract Genetic transformation of fish is mainly oriented towards the improvement of growth for the benefit of the aquaculture. Actually, Atlantic salmon (Salmo salar) is the species most transformed to achieve growth rates quite large compared to the wild. To anticipate the presence of contaminations with GM salmon in fish markets and the lack of labeling regulations with a mandatory threshold, the proper methods are needed to test the authenticity of the ingredients.

HARVARD UNIVERSITY - MAI 2011 - The AquAdvantage Salmon Controversy– A Tale of Aquaculture, Genetically Engineered Fish and Regulatory Uncertain. FDA 19/11/15 Questions and Answers on FDA’s Approval of AquAdvantage Salmon. General 1. What is different about AquAdvantage Salmon? AquAdvantage Salmon has been genetically engineered to grow to market size more rapidly than its non-GE Atlantic salmon counterpart. It does so because it contains an rDNA construct that is composed of the growth hormone gene from Chinook salmon under the control of a promoter (a sequence of DNA that turns on the expression of a gene) from ocean pout (another type of fish). This allows the salmon to grow to market size faster. 2. For its review, FDA relied on the data provided in the application, as well as other sources of data and information, including articles from peer-reviewed journals, taking care to ensure the most relevant data and information received the most weight in the agency’s decision-making process.The data in the application are provided by the company, because the burden of proof is on the sponsor, or company, to demonstrate safety and to validate the claim that is being made. 3. 4. 5.

USA TODAY 19/11/15 In historic first, FDA approves genetically altered salmon. If you want to find the latest product approved by the FDA, don't bother with the pharmacy. Try the fish freezer. The AquAdvantage Atlantic salmon has made history – along with a generous serving of controversy — by becoming the first genetically engineered food animal approved for sale in the U.S. Genetically modified fruits and vegetables have been sold for more than 20 years. WASHINGTON POST 19/11/15 If the GMO salmon is as good as its maker says, why not label it? This undated 2010 handout photo provided by AquaBounty Technologies shows two same-age salmon: a genetically modified salmon, rear, and a non-genetically modified salmon, foreground. (AquaBounty Technologies/Associated Press) This column was updated at noon. By now, you’ve probably heard that the Food and Drug Administration has approved the first-ever genetically engineered animal for human consumption. It’s an Atlantic salmon modified for fast growth with genes from two other edible fish, and it has been — and will undoubtedly continue to be — a lightning rod for all the issues associated with genetically modified foods.

There’s safety, there’s escape into the environment and there’s labeling: a trifecta of discord. [If GMOs aren’t the problem with our food system, then what is?] So, safety first. The larger issue is the possibility of escape, important because escapees could outcompete or interbreed with native fish. NATURE 19/11/15 Salmon is first transgenic animal to win US approval for food. AquaBounty Technologies AquAdvantage salmon grow to full size in 18 months, rather than the usual 3 years. A fast-growing salmon has become the first genetically engineered animal to be approved for human consumption in the United States. The decision, issued by the US Food and Drug Administration (FDA) on 19 November, releases the salmon from two decades of regulatory limbo. The move was met with swift opposition from some environmental and food-safety groups. But for advocates of the technology, the decision comes as a relief after a long and vexing wait. NORWEGIAN BIOTECHNOLOGY ADVISORY BOARD 24/04/13 Opinion on the assessment of AquAdvantage salmon.

PLOS 29/01/14 Determinants of Public Attitudes to Genetically Modified Salmon. The objective of this paper is to assess the attitude of Malaysian stakeholders to genetically modified (GM) salmon and to identify the factors that influence their acceptance of GM salmon using a structural equation model. A survey was carried out on 434 representatives from various stakeholder groups in the Klang Valley region of Malaysia. GLOBAL RESEARCH - NOV 2013 - Canada Approves Genetically Modified Salmon Exports to Panama. AquaBounty, a U.S. biotechnology company based in Maryland, has secured approval from the Canadian government to export 100,000 AquAdvantage salmon eggs from Prince Edward Island in eastern Canada to Chiriquí province in western Panama.