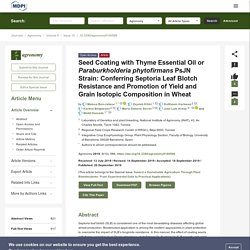 Biostimulant application is among the modern approaches in plant protection to overcome the impact of SLB’s fungicide resistance. In this manner, the effect of coating seeds with thyme essential oil or Paraburkholderia phytofirmans PsJN strain on SLB severity and yield components (spikes/m2, straw yield (SY), grain yield (GY) and thousand kernel weight (TKW)) were assessed under field conditions for 3 years. The effect on physiological traits and nitrogen and carbon isotope composition (δ15Ngrain, δ13Cgrain) and nitrogen and carbon content (Ngrain, Cgrain) of grains was assessed in one year of study. 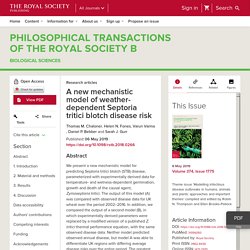 Introduction Crop plants are threatened by a plethora of pathogens [1]. Despite fungicide application and deployment of disease-resistant cultivars, such pathogens destroy around one-quarter of food production worldwide [2]. Wheat is the most important global cereal crop [3]; in the UK alone, over 12 million tonnes of wheat were harvested in 2013–2014 [4]. However, UK wheat yields are reduced up to 10% by the fungal pathogen Zymoseptoria tritici, the causal agent of Septoria tritici blotch (STB) [4], despite a spend of around £145 million (2014) on fungicides for its control [4,5]. Wind-dispersed ascospores are the primary inoculum of Z. tritici [6]. Both correlative and mechanistic attempts have been made to model STB disease risk and to develop disease forecasting tools based on weather data [19,20]. Here, we develop a new mechanistic model for STB (model A). 2. (a) Infection risk model parameterization TPC(T)=1LPmin+Curv×(T−Topt)2, (b) Model execution 3. 4. 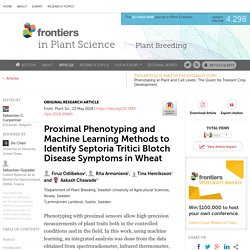 It is a hemibiotrophic fungus which penetrates host leaves through stomata and grows very slowly in the intercellular spaces of the mesophyll cells. The latent phase varies between 14–28 days under field conditions and 9–14 days under laboratory conditions (Kema et al., 1996; Shetty et al., 2003; Keon et al., 2007). This symptomless period has been referred to as ‘biotrophic’ (Kema et al., 2000), however, after more detailed transcriptomic and metabolic analysis, this term has become debatable (Rudd et al., 2015; Sánchez-Vallet et al., 2015). A cultivar with a high level of resistance can provide an effective mode to control the disease severity, but so far, cultivars with complete resistance are not developed (Chartrain et al., 2004). 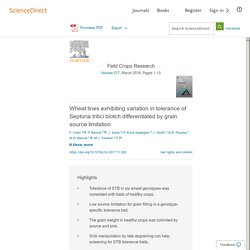 JavaScript is disabled on your browser. 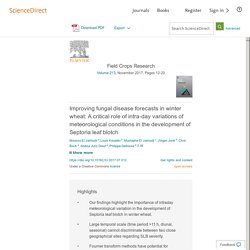 Please enable JavaScript to use all the features on this page. Highlights Our findings highlight the importance of intraday meteorological variation in the development of Septoria leaf blotch in winter wheat. Large temporal scale (time period >11 h, diunal, seasonal) cannot discriminate between two close geographical sites regarding SLB severity. Fourrier transform methods have potential for identifying microclimatic conditions prevailing at given geographical sites.

Fourrier transform methods could help in improving the prediction of disease forecast models used in regional warning systems. Abstract Meteorological conditions are important factors in the development of fungal diseases in winter wheat and are the main inputs of the decision support systems used to forecast disease and thus determine timing for efficacious fungicide application. Keywords Temporal variability Fourier transform method. Fungal Genet Biol. 2017 Sep;106:51-60. A role for random, humidity-dependent epiphytic growth prior to invasion of wheat by Zymoseptoria tritici. JavaScript is disabled on your browser. 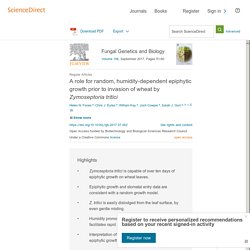 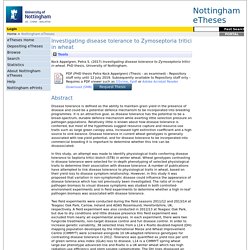 PhD thesis, University of Nottingham. Disease tolerance is defined as the ability to maintain grain yield in the presence of disease and could be a potential defence mechanism to be incorporated into breeding programmes. It is an attractive goal, as disease tolerance has the potential to be a broad-spectrum, durable defence mechanism while exerting little selection pressure on pathogen populations. Relatively little is known about how disease tolerance is conferred, but most of the hypotheses suggest resource capture and resource-use traits such as large green canopy area, increased light extinction coefficient and a high source to sink balance. Disease tolerance in current wheat genotypes is generally associated with low yield potential, and for disease tolerance to be incorporated into commercial breeding it is important to determine whether this link can be disassociated. 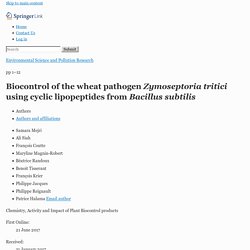 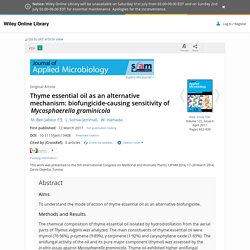 ROTHAMSTED_AC_UK - OCT 2016 - Learning from the “healthy” to protect the “infected” A novel mechanism has been identified which likely contributes to resistance against Septoria leaf blotch in plant species normally non-infected with the disease, providin. ETH-ZURICH - 2012 - Présentation : Population genetics and evolutionary biology of plant pathogenic fungi. Plant Pathology Plant pathogens evolve rapidly to overcome the disease control strategies that are deployed against them. 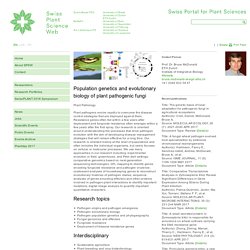 Resistance genes often fail within a few years after deployment and fungicide resistance often emerges within a few years after the first spray. Our research is oriented around understanding the processes that drive pathogen evolution with the aim of developing disease management strategies that will remain effective for a long time. Our research is oriented mainly at the level of populations and often includes the individual organisms, but rarely focuses on cellular or molecular processes. Pathogen origins and pathogen emergencePathogen evolutionary biologyPathogen population genetics and phylogeographyFungal genomics and effectorsFungicide resistanceDeployment of disease resistance genesSustainable agriculturePlant breeding and crop biotechnologyQuantitative geneticsWorld Food SystemGenetic Diversity CenterComparative genomics.

2017.03.16 | Janne Hansen Photo: Janne Hansen The race is on between fungicides that can effectively control pathogenic fungi in wheat and the fungi themselves, which are pretty talented at re-inventing themselves to resist the fungicides that aim to control them. Wheat production in northern Europe is reliant on the application of pesticides throughout the growing season. Fungicides account for approximately 25 percent of these applications, with the disease septoria tritici blotch (STB) as the primary target. In the battle against this fungus in wheat, the available fungicides are but a brief respite because the fungus is adept at developing resistance to the available fungicides. . - Unfortunately, the evolutionary potential of the fungus causing the disease STB, Zymoseptoria tritici, coupled with the highly specific nature of current fungicide chemistries, place the pathogen at a high risk of fungicide resistance development, says Dr.

Developing IPM tools for the future Research news. AGRIC_WA_GOV_AU 12/06/15 Diagnosing septoria tritici of wheat. Romanian agricultural research. 06/2015; Early PCR detection of the Mycosphaerella graminicola in the leaves of winter wheat in Poland. You are using an outdated version of Firefox which is not supported by ResearchGate anymore. For a faster, safer browsing experience, upgrade your browser now. <div class="c-box-warning full-width-element" style="text-align: center; "><div style="margin: auto; padding:10px;" class="container"><b>For full functionality of ResearchGate it is necessary to enable JavaScript. Here are the <a href=" rel="nofollow" target="_blank"> instructions how to enable JavaScript in your web browser</a>.

Pest Manag Sci (2010) 27/07/10 Multiple mechanisms account for resistance to sterol 14α-demethylation inhibitors in field isolat. Mycologia 2011;103:764. Genetic diversity and population structure in French populations of Mycosphaerella graminicola. + Author Affiliations Abstract Mycosphaerella graminicola populations were examined in France with microsatellite markers and PCR-SSCP analysis of partial actin and β-tubulin encoding sequences. A total of 363 isolates was sampled in 2005 from 17 provinces and genotypes from corresponding strains were characterized. Unique haplotypes comprised 84% of the population and gene diversity was high nationwide (0.70) and locally. A moderate genetic differentiation (GST= 0.18) was found and indicated that in France the M. graminicola population was more structured than in other previously studied European countries.

FARMERS GUARDIAN 10/06/11 Genetic advance may reduce septoria threat. SCIENTISTS have cracked the genetic code of septoria tritici - the most important foliar disease of wheat in the UK - and in doing so have gained an insight into how the disease is able to evade wheat’s natural defences. The researchers, who were funded by the BBSRC and others, hope the study, which reveals the complete genome sequence of the septoria pathogen mycosphaerella graminicola, will enable them to breed resistant crop plants or improve the use of pesticides.

Septoria typically results in yield losses of 5-15 per cent each season but losses can reach 50 per cent in severely affected crops. According to Prof Kim Hammond-Kosack of Rothamsted Research, who led the study in the UK, septoria attacks wheat plants by stealth. “There is normally a period of about a week between when a plant first becomes infected and when the characteristic blotches of the disease appear on its leaves. Researchers suspect this low numbers of genes may be crucial to the fungus’ stealth approach. Target. UPI 13/06/11 Costly wheat fungus' genome mapped (Mycosphaerella graminicola) WEST LAFAYETTE, Ind., June 13 (UPI) -- One of the most destructive wheat viruses is genetically structured to evade detection before infecting its host, a U.S. study mapping the fungus' genome found. Principle author Goodwin, a Purdue University research plant pathologist, said the fungus had fewer enzyme-producing genes that many fungi use to penetrate and digest plants' surfaces while infecting them.

Goodwin worked on sequencing the genome of the fungus Mycosphaerella graminicola, which causes septoria tritici blotch, a disease that reduces yield and quality in wheat, the university said in a release. "We're guessing that the low number of enzymes is to avoid detection by plant defenses," Goodwin said. Enzymes typically break down plant cell walls and begin removing nutrients, leading to the plant's death, the researcher said.