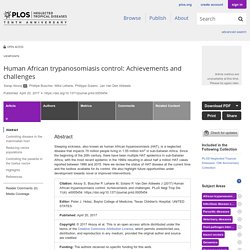 Since the beginning of the 20th century, there have been multiple HAT epidemics in sub-Saharan Africa, with the most recent epidemic in the 1990s resulting in about half a million HAT cases reported between 1990 and 2015. Here we review the status of HAT disease at the current time and the toolbox available for its control. 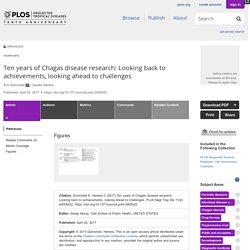 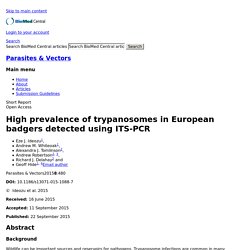 Twenty-nine out of the 82 DNA samples amplified using ITS-Nested PCR producing band sizes of approximately 1271 bp indicating the badgers were positive for trypanosomes. This gives a prevalence of 35.4 % (25.9 %–46.2 %; 95 % CI). The 18S PCR was carried out on badger DNA samples that were positive for trypanosome DNA, to identify the species detected and confirm that the ITS-PCR technique was indeed detecting the target species (T. pestanai). The novel 28S region was successfully amplified, producing a band size of 2460 bp, and sequenced [Accession Number KR527480]. No variation was seen between badger trypanosome samples using this marker.

Editorial Chagas disease: still a challenge around the World. 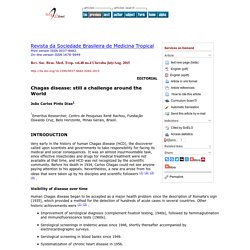 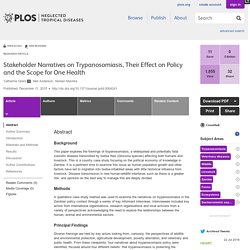 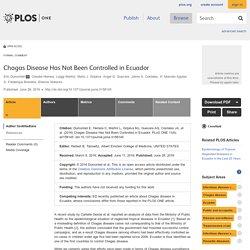 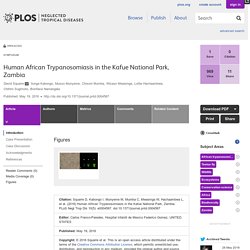 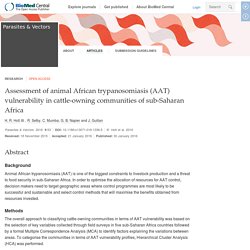 The majority of communities did not report using ITC, (>80 % in every cluster). Communities in cluster 1 were most likely to believe that centralised governments (67.4 %) or NGO’s (17.4 %) were responsible for control. With cluster 2 and 3 more likely to name district officials or individuals. PARASITES & VECTORS 27/01/16 Increased mortality attributed to Chagas disease: a systematic review and meta-analysis. Our study is the first to review, collate and analyse available (published) studies on mortality rates associated with Chagas disease using a robust and coherent meta-analytical framework. 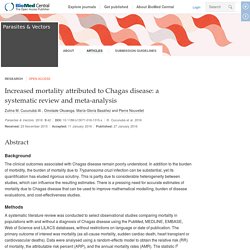 One of the motivations for this meta-analysis was to assess whether Chagas disease induces a higher risk of mortality compared to control populations with similar clinical symptoms. The overall excess mortality, estimated as a relative risk ratio, was equal to 1.74 (95 % CI 1.49–2.03), which was robust to both publication bias (RR = 1.42, 95 % CI 1.19–1.70) and highest quality studies (RR = 2.07, 95 % CI 1.54–2.78). Interestingly, this (statistically significant) magnitude of excess mortality appeared to affect equally patients with mild, moderate or severe symptoms (relative to their baseline, background mortality).

We found no significant impact of sex and study location (country) on excess mortality. PARASITES & VECTORS 22/07/15 Cost analysis of options for management of African Animal Trypanosomiasis using interventions targeted at cattle in Tororo District; south-eastern Uganda. This study analysed the costs incurred for applying RAP to 1,409 cattle in 12 villages in Tororo District to assess the applicability of RAP for AAT management in small-scale livestock production systems. 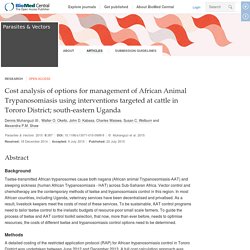 Trypanocidal chemotherapy and RAP were targeted at AAT control. Non-tsetse control activities related to monitoring project effectiveness (Trypanosome species and T.parva prevalences) namely: blood sampling, herd structure records and deworming, comprised 55 % of the costs. Such research costs, together with administrative overheads often account for a high proportion of the expenditure for AAT control and vary greatly from strategy to strategy but are often omitted from published cost figures for interventions [37].

For technologies described as lower cost technologies such as RAP, a substantial share of the costs has previously [27] been reported and confirmed here (77.6 % of all costs) to be due to delivery. PARASITES & VECTORS 30/09/15 Studies of trypanosomiasis in the Luangwa valley, north-eastern Zambia. Diagnosis of AAT and HAT in endemic regions remains a big challenge. In the present study, several tests were applied to determine AAT infection in cattle and goats and the presence of trypanosome species in tsetse vectors. As expected, microscopy exhibited relatively lower sensitivity than PCR and LAMP. Of note, there was poor agreement among the test methods used for detection of trypanosomes species in animal blood and tsetse flies (Kappa <0.40).

For instance, the failure of PCR and LAMP to detect and identify 6 parasitologically positive cattle samples in this study was unexpected. These discrepancies may be resolved by the use of more sensitive trypanosome-species-specific PCR and/or LAMP. The major advantage of molecular tests over microscopy is for epidemiological studies to identify trypanosome species. Nature. 2016 Aug 8.Proteasome inhibition for treatment of leishmaniasis, Chagas disease and sleeping sickness.

THE LANCET - NOV 2015 - Old and new challenges in Chagas disease. Infect Dis Poverty. 2015 Dec 28;4:60. Preventing the transmission of American trypanosomiasis and its spread into non-endemic countries. Glob Heart. 2015 Sep;10(3):139-44. The burden of Chagas disease: estimates and challenges. To view the full text, please login as a subscribed user or purchase a subscription. Click here to view the full text on ScienceDirect.

These infectious eukaryotic parasites have been described and identified over a century ago; however, as of today, no vaccines are available and the availability of effective prophylactic and therapeutic drugs remains limited. It is estimated that more than 20 million people are infected and that 100,000 people die each year of trypanosomiasis or Chagas’ disease (1).

FDA 11/10/15 Chagas Disease: An Emerging Public Health Concern. Chagas Disease Fact Sheet PDF Enfermedad de Chagas PDF On April 28, 2015, FDA met with patients during one of FDA’s Patient-Focused Drug Development meetings to discuss patients’ concerns regarding their symptoms and treatment options for Chagas disease. These meetings are important as patients have the opportunity to convey their concerns about current medications and the types of medications they would like to see in the future. BenznidazoleNifurtimox. EQUUSMAGAZINE - AVRIL 2016 - First U.S. case of equine Chagas disease. DeBakey Institute For Cardiovascular Education via YOUTUBE 24/02/16 “Chagas Disease in Non-Endemic Countries" (Carlos A. Morillo, M.D.) February 18, 2016. CDC 01/12/15 Triatomine Bug FAQs. BioMed Research International Volume 2015 (2015), Overview of the Diagnostic Methods Used in the Field for Human African Trypanosomiasis: What Could Change in the Next Years?