BMC VETERINARY RESEARCH 04/04/17 Serological testing of Schmallenberg virus in Swedish wild cervids from 2012 to 2016. This is the first report of findings of SBV-specific antibodies in Scandinavian wildlife, showing that wild cervids in Sweden were exposed to the virus in the summer of 2012 and probably not after the vector season 2014. 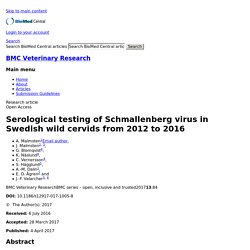 Moreover, this study indicates that SBV infection in wildlife and domesticated animals follows the same pattern in the same area in which cattle were seropositive in 2012 and 2013 but seronegative in a recent serological survey when born after the vector season 2013 (S. Zohari, personal communication). Schmallenberg virus does not seem to circulate in Sweden anymore, in contrast to other European countries such as Germany [13].

The difference between Sweden and countries in central and southern Europe is that Sweden has a long vector-free season. Virus transmission and spread is possible at temperatures around 15 °C with a temperature optimum between 18 °C and 19 °C due to vector limitations [20]. The effect of SBV in wildlife is still unknown. Microbiology Society via YOUTUBE 30/10/15 Professor Richard Elliott: 'Schmallenberg virus: fact from fiction' Epidemiology of Communicable and Non-Communicable Diseases - Attributes of Lifestyle and Nature on Humankind 09/11/16 Au sommaire: Epidemiology and Emergence of Schmallenberg Virus. Edited by Fyson H. 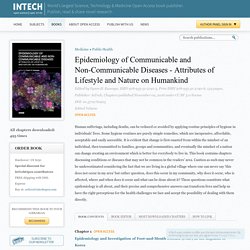 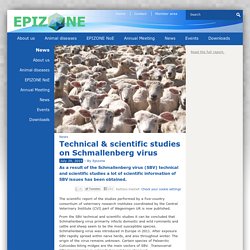 The scientific report of the studies performed by a five-country consortium of veterinary research institutes coordinated by the Central Veterinary Institute (CVI) part of Wageningen UR is now published. From the SBV technical and scientific studies it can be concluded that Schmallenberg virus primarily infects domestic and wild ruminants and cattle and sheep seem to be the most susceptible species. DOVEPRESS 29/06/15 Schmallenberg virus infection of ruminants: challenges and opportunities for veterinarians. François Claine, Damien Coupeau, Laetitia Wiggers, Benoît Muylkens, Nathalie Kirschvink Veterinary Department, Faculty of Sciences, Namur Research Institute for Life Sciences (NARILIS), University of Namur (UNamur), Namur, Belgium Abstract: In 2011, European ruminant flocks were infected by Schmallenberg virus (SBV) leading to transient disease in adult cattle but abortions and congenital deformities in calves, lambs, and goat kids. 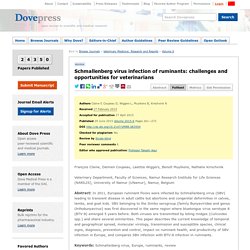 SBV belonging to the Simbu serogroup (family Bunyaviridae and genus Orthobunyavirus) was first discovered in the same region where bluetongue virus serotype 8 (BTV-8) emerged 5 years before. Both viruses are transmitted by biting midges (Culicoides spp.) and share several similarities. Introduction. BMC 11/03/15 Comparison of Schmallenberg virus antibody levels detected in milk and serum from individual cows. The bulk tank milk sample from herd A had an antibody level of 58% and from herd B 73%. 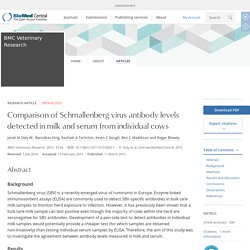 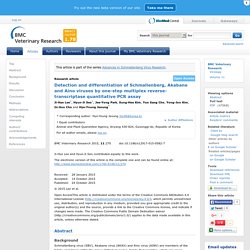 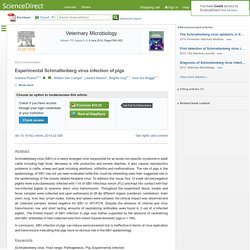 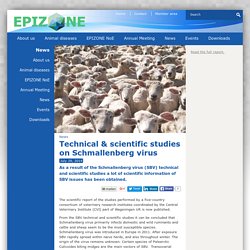 From the SBV technical and scientific studies it can be concluded that Schmallenberg virus primarily infects domestic and wild ruminants and cattle and sheep seem to be the most susceptible species. Schmallenberg virus was introduced in Europe in 2011. After exposure SBV rapidly spread within naive herds, and also throughout winter. The origin of the virus remains unknown. Certain species of Palearctic Culicoides biting midges are the main vectors of SBV. Increased insights in SBV topics and related issues also revealed that there are several important topics remaining for which study is recommended. 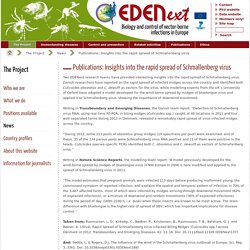 Danish researchers have reported on the rapid spread of infected midges across the country and identified both Culicoides obsoletus and C. dewulfi as vectors for the virus, while modelling experts from the UK's University of Oxford have adapted a model developed for the wind-borne spread by midges of bluetongue virus and applied it to Schmallenberg virus, showing the importance of downwind movement. Writing in Transboundary and Emerging Diseases, the Danish team report: “Detection of Schmallenberg virus RNA, using real-time RT-PCR, in biting midges (Culicoides spp.) caught at 48 locations in 2011 and four well-separated farms during 2012 in Denmark, revealed a remarkably rapid spread of virus-infected midges across the country. Taken from: Rasmussen, L. D., Kirkeby, C., Bødker, R., Kristensen, B., Rasmussen, T. B., Belsham, G.

AGRILAND 25/01/15 Schmallenberg Virus may hit Irish farms again this year. The Schmallenberg Virus, which hit Ireland in 2012 resulting in malformed newborn calves and lambs, could return, the Department of Agriculture has warned. 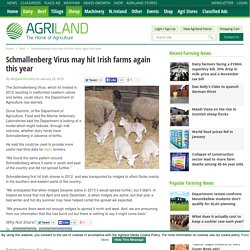 Donal Sammin, of the Department of Agriculture, Food and the Marine Veterinary Laboratories said the Department is looking at a model which might indicate, through milk volumes, whether dairy herds have Schmallenberg in advance of births. He said this could be used to provide more useful real-time data for dairy farmers. “We found the same pattern around Schmallenberg where it came in south and east of the country and did not spread further.” RESONANCE - SEPT 2014 - Schmallenberg Virus - An Emerging New Challenge to Farm Animals. Epidemiology, Molecular Virology and Diagnostics of Schmallenberg Virus, an Emerging Orthobunyavirus in Europe. XLVets disease bulletin - JANV 2014 - Schmallenberg virus. HANNOVER UNIVERSITY - 2013 – Thèse en ligne : Characterization of Schmallenberg virus-induced pathology in aborted and neonatal. FWI 24/01/14 Schmallenberg cases higher than previously thought. The number of sheep and cows infected with the Schmallenberg virus in south-west England is higher than previously thought, say experts.

Researchers at the Duchy College in Callington said vets had estimated that the virus affected nearly 60% of dairy herds and 42% of sheep. However, a new survey of more than 3,000 cattle and 2,000 sheep found 80% of herds and 70% of sheep tested positive. Schmallenberg virus, which emerged in the Netherlands and Germany in 2011, can lead to sheep and cattle having stillborn or deformed offspring. Scientists believe the virus, which was first detected in the South West in March 2012, was carried across the Channel by biting midges.

It is believed the virus, which was first detected in the south-west of England in March 2012, was carried by midges blown across the Channel and was then spread by native midges during summer 2012. The Department for Environment Food and Rural Affairs (Defra) and the European Union paid the Rural Business School at Duchy College in Callington to carry out the research across the wider South West last July. DOVEPRESS 24/04/13 Schmallenberg virus: continuing a trend? À propos de cette page Nos systèmes ont détecté un trafic exceptionnel sur votre réseau informatique. Cette page permet de vérifier que c'est bien vous qui envoyez des requêtes, et non un robot. International Journal of Health Geographics 2013, 12:7 Could drought conditions trigger Schmallenberg virus and other arboviruse. JSAVA - 2013 - Schmallenberg virus – Is it present in South Africa?

In July 2006, a case of two out of three lambs born to one ewe in a flock of 45 had signs that, in retrospect, were possibly consistent with Schmallenberg virus infection. This occurred in the Onderstepoort area (Gauteng Province) but a definitive diagnosis was not made. Then, in May 2008, a farmer in the Delmas area (Mpumalanga Province) reported that deformed lambs had been born to several ewes in the flock. Six of the approximately 50 mated ewes gave birth to lambs showing varying degrees of arthrogryposis, torticollis, kyphosis, mandibular brachygnathia and hydrocephalus. Of these, only two were born alive but they died within a few hours. Blood was collected from the ewes with deformed lambs, a random sample of ewes that had given birth to normal lambs and a lamb that was normal but had a twin that was deformed.

Case 1 In July 2006, a Mutton Merino ewe from a small flock in the Onderstepoort area, Gauteng Province, gave birth to triplets (Figure 1). PLOS 10/01/13 Schmallenberg Virus Pathogenesis, Tropism and Interaction with the Innate Immune System of the Host. Abstract Schmallenberg virus (SBV) is an emerging orthobunyavirus of ruminants associated with outbreaks of congenital malformations in aborted and stillborn animals. Since its discovery in November 2011, SBV has spread very rapidly to many European countries. The Veterinary Journal Volume 194, Issue 1, October 2012 The challenge of Schmallenberg virus emergence in Europe. Open Access Abstract The large-scale outbreak of disease across Northern Europe caused by a new orthobunyavirus known as Schmallenberg virus has caused considerable disruption to lambing and calving. Although advances in technology and collaboration between veterinary diagnostic and research institutes have enabled rapid identification of the causative agent and the development and deployment of tests, much remains unknown about this virus and its epidemiology that make predictions of its future impact difficult to assess.

This review outlines current knowledge of the virus, drawing comparisons with related viruses, then explores possible scenarios of its impact in the near future, and highlights some of the urgent research questions that need to be addressed to allow the development of appropriate control strategies. Keywords. NORTH DAKOTA DEPARTMENT OF AGRICULTURE 22/03/12 Schmallenberg virus guidance for U.S. veterinary diagnostic laboratories.