AFR. J. FOOD AGRIC. NUTR. DEV. - 2020 - The potential of Uapaca kirkiana fruit jam for the delivery of Lactobacillus rhamnosus yoba as a probiotic food. FOOD SCIENCE & NUTRITION 17/02/20 Survival and stability of free and encapsulated probiotic bacteria under simulated gastrointestinal conditions and in ice cream. The demand for functional food is increasing across the world due to their therapeutic potential. 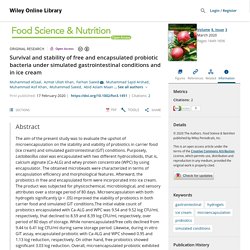 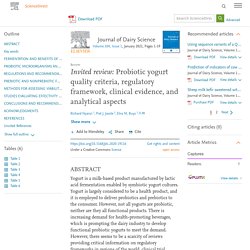 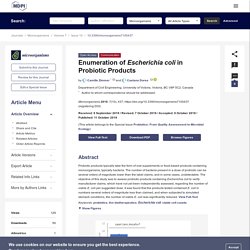 The number of bacteria present in a dose of probiotic can be several orders of magnitude lower than the label claims, and in some cases, undetectable. The objective of this study was to assess probiotic products containing Escherichia coli to verify manufacturer claims, which have not yet been independently assessed, regarding the number of viable E. coli per suggested dose. It was found that the products tested contained E. coli in numbers several orders of magnitude less than claimed, and when subjected to simulated stomach conditions, the number of viable E. coli was significantly reduced. View Full-Text ►▼ Show Figures. World J Gastroenterol. 2013 March 14; 19(10): 1527–1540. Actual concept of "probiotics": Is it more functional to science or business? 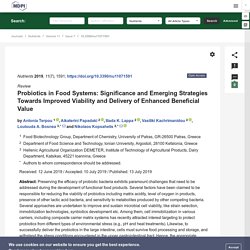 Selection of Probiotics The selection and characterization of new species (e.g., Lactobacillus, Bifidobacterium, Propionibacterium, Faecalibacterium) constitutes a major field of research with respect to the selection of probiotics. The criteria for a strain to be characterized as a probiotic either for food or nutraceutical applications are constantly evolving and developing. These criteria can be roughly divided in four distinct categories: 1. technological, 2. safety, 3. functional and 4. physiological characteristics [60,86,87,88]. Viability during food processing and/or storage and survival after the passage in the upper intestinal transit along with the ability to exert health benefits to the host constitute the most important criteria for the probiotic selection.

NATURE 09/08/19 Probiotics and prebiotics in intestinal health and disease: from biology to the clinic. NATURE 06/05/19 The pros, cons, and many unknowns of probiotics. MICROORGANISMS 11/04/19 Probiotics: If It Does Not Help It Does Not Do Any Harm. Really? The present review cannot be completed without an update on probiotic safety. 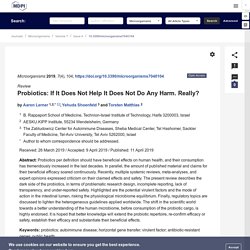 The food and drug administration consider some probiotics, as GRAS, when added to food [188], especially when intended to impact taste, aroma, or nutritional value [74,189]. However, most of the reviews, analyzing the safety of probiotics highlight the issue of a lack of structural classification and a wide generalization of conclusions that is limited by imprecise, inconsistent, and incomplete reporting intermingled with variations in strains used, dosages, regimes of administration, experimental designs, and the participating populations [74,148,149,167]. Many contrast the differences that exist between the long history of the large consumption of “safe” probiotics compared to the scarcity of scientific proof for their safety [74,149,167].

LWT - Food Science and Technology Volume 68, May 2016, Consumers' attention to functional food labels: Insights from eye-tracking and change detection in a case study with probiotic milk. JOURNAL OF CELLULAR PHYSIOLOGY 25/03/19 Importance of probiotics in the prevention and treatment of colorectal cancer. Colorectal cancer (CRC) remains one of the most common and deadly cancers. 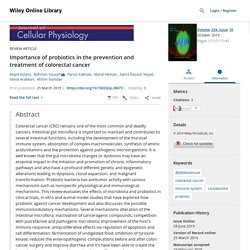 Intestinal gut microflora is important to maintain and contributes to several intestinal functions, including the development of the mucosal immune system, absorption of complex macromolecules, synthesis of amino acids/vitamins and the protection against pathogenic microorganisms. It is well known that the gut microbiota changes or dysbiosis may have an essential impact in the initiation and promotion of chronic inflammatory pathways and also have a profound different genetic and epigenetic alterations leading to dysplasia, clonal expansion, and malignant transformation. 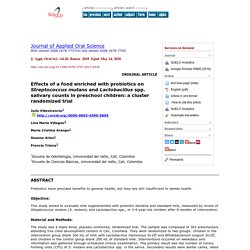 INTECH 14/03/18 Probiotics and Its Relationship with the Cardiovascular System. 2. 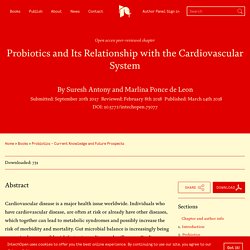 Probiotics Individuals using probiotics for the improvement of health have a well-known history, especially lactic acid bacteria (LAB) and Bifidobacteria, as well as prebiotics as part of food or fermented food [7, 20]. FRONT. MICROBIOL. 21/05/19 Emerging Health Concepts in the Probiotics Field: Streamlining the Definitions. Introduction The concept of traditional probiotics was initially based on the observations of Elie Metchnikoff in 1907. 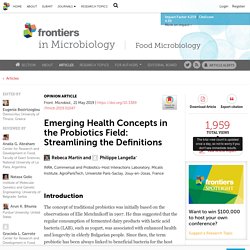 He thus suggested that the regular consumption of fermented dairy products with lactic acid bacteria (LAB), such as yogurt, was associated with enhanced health and longevity in elderly Bulgarian people. Since then, the term probiotic has been always linked to beneficial bacteria for the host health, although its precise definition has evolved over the time (Figure 1A). Nowadays, thanks to the huge increase in the knowledge of the human gut microbiota and the importance of microbiota imbalances (dysbiosis) in several diseases and syndromes, probiotics can be used to restore the normal balance of the intestinal ecosystem as novel health promoting strategy. Figure 1. These new approaches have boosted the probiotic area during the last years with direct impacts on consumers and general public.

Introduction Currently, the worldwide production of non‐bovine milk reaches 133 million tons per year, accounting for more than 17% of all milk production. 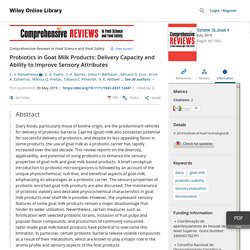 Of this, 13.5% is goat milk output, which is considered one of the major contributors to non‐bovine milk production (Nuñe & de Renobales, 2016; Ranadheera, Naumovski, & Ajlouni, 2018). The existing world herd of goats is estimated at approximately 780 million, and approximately 12.2 million metric tons of goat milk is produced annually. This production corresponds to approximately 2% of all world production by the dairy industry. Clinical Microbiology Newsletter Volume 40, Issue 12, 15 June 2018, Efficacy of Probiotics in Prevention and Treatment of Infectious Diseases. Braz. J. Pharm. Sci. July 26, 2018 Effect of probiotics on giardiasis. Where are we?

BMC GASTROENTEROLOGY 06/08/18 A practical guide for probiotics applied to the case of antibiotic-associated diarrhea in The Netherlands. BMC 17/12/18 Why parents are skeptical about using probiotics preventively for small children: a Danish qualitative study. Three major findings emerge from the four-stage analytical process we followed: a) naturalness appears to be a guiding principle in parental choices about what their children consume in general; b) parents are skeptical about the pharmaceutical industry, although they also accept that it promotes beneficial health effects; c) parents perceive probiotics as both natural and unnatural, and this duality makes it hard for them to evaluate the risks associated with probiotics.

Naturalness as a guiding principle in a world of risky products Many of the interviewees resisted probiotics for their children. This resistance was connected with their perceptions of healthy childhood and the way the product fitted into these perceptions. IP1 is a mother of two. She explains why, over a short period, she gave probiotics to her youngest as treatment, but would not consider using it preventively: IP1: We did this (used probiotics) only because she had stomach ache. AFRICAN JOURNAL OF FOOD SCIENCE - SEPT 2018 - Isolation and identification of probiotic Lactobacillus species from traditional drink kunun-zaki fortified with paddy rice and sweet potatoes. ACADEMIC JOURNALS 31/10/18 Weaning food fortification and improvement of fermented cereal and legume by metabolic activities of probiotics Lactobacillus plantarum.

Abstract The provision of cheap, balanced and adequate nutritional composition for growing infants is a major challenge in Africa. Most weaning foods are usually cereal-based gruels fermented by lactic acid bacteria (LAB). The major nutrient they supply being carbohydrate, uncontrolled or inappropriate intake might cause growth retardation and malnutrition in growing children. The nutritional requirement of weaning infants could be supplied by supplementation with protein rich diets.

Soybean is a cheap and available source of protein in Nigeria; but it also contain some complex sugars (raffinose) which is associated with abdominal discomfort in children of weaning age. Institutional Repository of Indian National Agricultural Research System - 2012 - Thèse en ligne: EFFECT OF CO-ENCAPSULATION OF CERTAIN PROBIOTICS WITH PREBIOTICS ON THE VIABILITY IN DAHI AND PASTEURISED FLAVOURED MILK DURING REFRIGERATED STORAGE.

S Afr Fam Pract - 2012 - The use of prebiotics and probiotics in infant formula. Procedia Chemistry Volume 10, 2014, Microbiological Quality Control of Probiotic Products. Norwegian Scientific Committee for Food Safety - 2014 - Assessment of probiotics in infant formula and cereal based baby foods containing Bifidobacterium lactis Bb12 – update 2014. Opinion of the Panel on biological hazards of the Norwegian Scientific Com. Journal of Functional Foods Volume 9, July 2014, Probiotic functional foods: Survival of probiotics during processing and storage. JavaScript is disabled on your browser. Please enable JavaScript to use all the features on this page. Highlights. JOURNAL OF FOOD QUALITY - SEPT 2016 - Antimicrobial Activities of Probiotic Yogurts Flavored with Peppermint, Basil, and Zataria against Escherichia coli and Listeria monocytogenes.

References. Genes Nutr. 2011 Aug; 6(3): 209–240. Intestinal microbiota in human health and disease: the impact of probiotics. FRONTIERS IN MICROBIOLOGY 14/09/17 Emerging trends in “Smart Probiotics”: functional consideration for the development of novel health and industrial applications. 1Center for Microbial Ecology and Technology (CMET), Ghent University, Belgium The link between gut microbiota and human health is well-recognized and described. This ultimate impact on the host has contributed to explain the mutual dependence between humans and their gut bacteria. Gut microbiota can be manipulated through passive or active strategies. PARLEMENT EUROPEEN - Réponse à question E-004201-17 Use of the term ‘probiotic’ and nutrition claims.

In many Member States, the term ‘probiotic’ is widely understood as indicating a category of products. ABCD, arq. bras. cir. dig. vol.29 no.4 São Paulo Oct./Dec. 2016 TECHNOLOGICAL INFORMATION REGARDING PREBIOTICS AND PROBIOTICS NUTRITION VERSUS THE PATENT REGISTERS: WHAT IS NEW? Review Article José Maciel Caldas dos REIS1 Maurício Fortuna PINHEIRO1 André Takashi OTI1. 8TH WORLD CONGRESS OF VETERINARY DERMATOLOGY - OCT 2016 - Au sommaire notamment: Probiotics, Prebiotics – How do they work and when do we use them?

Food Science and Technology 07/06/16 Fruit salad as a new vehicle for probiotic bacteria. Nutrients 2017, 9(4), 400; Mismatch between Probiotic Benefits in Trials versus Food Products. 1. Introduction Probiotics are “live microorganisms that when administered in adequate amounts confer a health benefit on the host” [1,2]. The benefits of consuming bacteria have been known since ancient times, when fermented milk was commonly prescribed to treat an upset stomach [3]. Today, the term “probiotic” has been defined and qualified by the World Health Organization, which put also forward guidelines to support their use.

UNIVERSITY OF OXFORD 18/11/15 £1.8m funding for probiotics research. Food Science and Human Wellness Volume 4, Issue 2, June 2015, New perspectives on probiotics in health and disease. Abstract The gut microbiota continues to fascinate scientists in many realms when it is considered that humans contain 90% bacteria. Brain, Behavior, and Immunity Volume 48, August 2015, A randomized controlled trial to test the effect of multispecies probiotics on cognitive reactivity to sad mood ☆ BRITISH JOURNAL OF NUTRITION - DEC 2015 - Probiotics: a proactive approach to health. A symposium report. Full Papers. Clinical Microbiology and Infection Volume 19, Issue 4, April 2013, Overview of differences between microbial feed additives and probiotics for food regarding regulation, growth promotion effects and health properties and consequences for extrapolation of.

For many years, microbial adjuncts have been used to supplement the diets of farm animals and humans. They have evolved since the 1990s to become known as probiotics, i.e. functional food with health benefits. Nutrition Journal (2015) 14:16 A review of the systematic review process and its applicability for use in evaluating evidence for health claims on probiotic foods in the European Union. BMC 23/10/14 Application of evidence on probiotics, prebiotics and synbiotics by food industry: a descriptive study. BRITISH JOURNAL OF NUTRITION - DEC 2015 - Probiotics: a proactive approach to health. A symposium report.

Nutrition Journal (2015) 14:16 A review of the systematic review process and its applicability for use in evaluating evidence for health claims on probiotic foods in the European Union. Clinical Microbiology and Infection Volume 19, Issue 4, April 2013, Overview of differences between microbial feed additives and probiotics for food regarding regulation, growth promotion effects and health properties and consequences for extrapolation of. BMC 23/10/14 Application of evidence on probiotics, prebiotics and synbiotics by food industry: a descriptive study. International Food Research Journal 21(3): 965-972 (2014) Evaluation of the use of probiotic acid lactic bacteria in the development of chicken hamburger. Altern Integ Med - 2013 - Probiotics for Human and Poultry Use in the Control of Gastrointestinal Disease: A Review of Real-World Experiences.