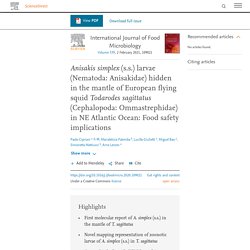 ANIMALS 11/12/20 Genera and Species of the Anisakidae Family and Their Geographical Distribution. Nematodes of the Anisakidae family have the ability to infest a wide variety of aquatic hosts during the development of their larval stages, mainly marine mammals, aquatic birds, such as pelicans, and freshwater fish, such crucian carp, these being the hosts where the life cycle is completed. 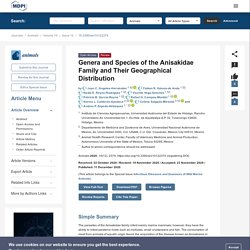 The participation of intermediate hosts such as cephalopods, shrimp, crustaceans and marine fish, is an important part of this cycle. Due to morphological changes and updates to the genetic information of the different members of the family, the purpose of this review was to carry out a bibliographic search of the genus and species of the Anisakidae family identified by molecular tests, as well as the geographical area in which they were collected. The Anisakidae family is made up of eight different parasitic genera and 46 different species. ►▼ Show Figures. PARASITOLOGY RESEARCH 16/05/19 How effective is freezing at killing Anisakis simplex, Pseudoterranova krabbei, and P. decipiens larvae? An experimental evaluation of time-temperature conditions.

In the present study, A. simplex s.s. was the only species molecularly identified from the body cavity of C. harengus membras. 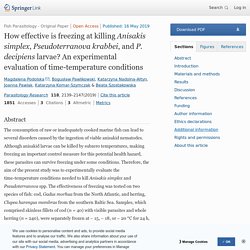 Nematodes isolated from G. morhua fillets represented P. decipiens s.s., P. krabbei and A. simplex s.s. This is in line with previously published genetic data according to which A. simplex s.s. is the only Anisakis species recorded in the Baltic (Mattiucci et al. 1997). According to Gay et al. (2018), the major species isolated from the fillets and the viscera of G. morhua from the Northern North Sea was A. simplex s.s. (99.8%), while only three individuals of A. pegreffii were identified in fillets. MOLECULES 15/07/19 Efficacy of Origanum syriacum Essential Oil against the Mosquito Vector Culex quinquefasciatus and the Gastrointestinal Parasite Anisakis simplex, with Insights on Acetylcholinesterase Inhibition.

Developing effective and eco-friendly antiparasitic drugs and insecticides is an issue of high importance nowadays. In this study, we evaluated the anthelminthic and insecticidal potential of the leaf essential oil obtained from Origanum syriacum against the L3 larvae of the parasitic nematode Anisakis simplex and larvae and adults of the mosquito Culex quinquefasciatus. Tests on A. simplex were performed by standard larvicidal and penetration assays, while mosquito toxicity was assessed relying on larvicidal, tarsal contact, and fumigation tests. To shed light on the possible mode of action, we analyzed the oil impact as acetylcholinesterase (AChE) inhibitor. This oil was particularly active on L3 larvae of A. simplex, showing a LC50 of 0.087 and 0.067 mg mL−1 after 24 and 48 h treatment, respectively. 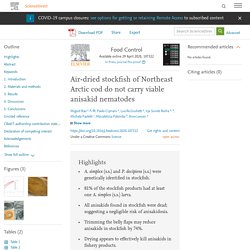 Introduction Stockfish (tørrfisk in Norwegian) is an unsalted, naturally dried fish product produced on open-air timber racks in Northern Norway. Stockfish is made from fresh, migrating Northeast (NE) Arctic cod (Gadus morhua) (skrei in Norwegian), caught during its annual southward migration from the Barents Sea to the spawning grounds off the Lofoten-Vesterålen archipelago, and other north-western coastal regions of Norway, between January and May (Bergstad, Jørgensen, & Dragesund, 1987; Sundby & Nakken, 2008). The NE Arctic cod population sustains the largest cod fishery in the world (Dahle, Johansen, Westgaard, Aglen, & Glover, 2018). Fishes are beheaded, gutted and hung outdoor for approximately 3 months at temperatures of around 0–2 °C before being moved to dry and ventilated warehouses for storage/maturation for 2–12 months prior to shipment. 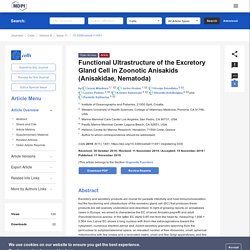 In light of growing reports on anisakiasis cases in Europe, we aimed to characterise the EC of larval Anisakis pegreffii and adult Pseudoterranova azarasi. In the latter, EC starts 0.85 mm from the head tip, measuring 1.936 × 0.564 mm. Larval EC shows a long nucleus with thorn-like extravaginations toward the cytoplasm, numerous electron-dense and -lucent secretory granules spanning from the perinuclear to subplasmalemmal space, an elevated number of free ribosomes, small, spherical mitochondria with few cristae and a laminated matrix, small and few Golgi apparatuses, and few endoplasmic reticula, with wide cisternae complexes. MOLECULES 15/07/19 Efficacy of Origanum syriacum Essential Oil against the Mosquito Vector Culex quinquefasciatus and the Gastrointestinal Parasite Anisakis simplex, with Insights on Acetylcholinesterase Inhibition. International Journal for Parasitology: Parasites and Wildlife Available online 6 June 2019 Anisakis Nematodes in Fish and Shellfish- from infection to allergies. 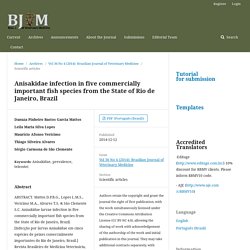 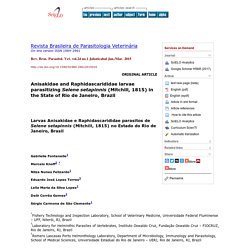 Anisakiasis is a fish-borne parasitic disease; it is caused by the consumption of raw or undercooked fish, as well as cephalopods, contaminated by third instar larvae of species belonging to the genus Anisakis (Anisakidae), with special reference to Anisakis simplex, Anisakis pegreffii and Pseudoterranova decipiens (Grabda 1976; Mattiucci and Nascetti 2006; Audicana and Kennedy 2008; Pravettoni et al. 2012). 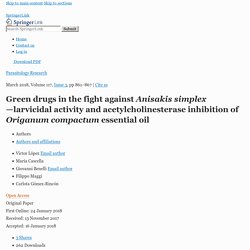 After ingestion, the larvae penetrate the gastric and intestinal mucosa, causing the symptoms of anisakiasis (Broglia and Kapel 2011). Recently, it has been estimated that about 20,000 cases of anisakiasis are reported per year worldwide. The large majority of the cases is from Japan (> 90%), due to the traditional use of sashimi as food. Other countries characterized by a rather large number of anisakiasis cases are Spain, the Netherlands, Germany and Scandinavia (Bao et al. 2017). JAPANESE JOURNAL OF INFECTIOUS DISEASES - 2018 - Detection of Anisakid Larvae in Marinated Mackerel Sushi in Tokyo, Japan. Int J Food Microbiol. 2017 Nov 16;261:89-94. Quantitative SYBR Green qPCR technique for the detection of the nematode parasite Anisakis in commercial fish-derived food. 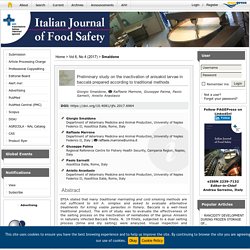 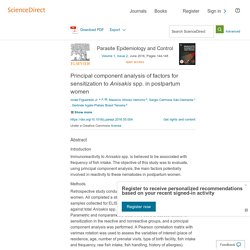 -- react-text: 57 -->JavaScript is disabled on your browser. Please enable JavaScript to use all the features on this page. <! JOURNAL OF FOOD AND HEALTH SCIENCE 23/11/16 ANISAKIASIS: PARASITIC HAZARD IN RAW OR UNCOOKED SEAFOOD PRODUCTS AND PREVENTION WAYS. JOURNAL OF ENTOMOLOGY AND ZOOLOGY STUDIES - 2017 - Cutlassfish infestation (Trichiurus lepturus) by Anisakis simplex larvae in Moroccan Atlantic coast. Ital J Food Saf. 2017 Jan 24; 6(1): 6185. Occurrence of Nematodes of the Genus Anisakis in Mediterranean and Atlantic Fish Marketed in Sardinia. Int J Case Rep Images 2016;7(9):622–623. Small bowel occlusion due to Anisakis infection.

HELMINTHOLOGIA,49,1:16–20,2012 Anisakis spp. burden in Trachurus trachurus. DISEASES OF AQUATIC ORGANISMS - 2017 - Anisakis (Nematoda: Ascaridoidea) from Indonesia. DIGESTIVE AND LIVER DISEASE - AOUT 2016 - Molecular confirmation of Anisakis pegreffii as a causative agent of anisakidosis in France. Critical Reviews in Food Science and Nutrition 25/03/15 Prevalence and Mean Intensity of Anisakidae Parasite in Seafood Caught in Mediterranean Sea Focusing on Fish Species at Risk of Being Raw-consumed. A Meta Analysis and Systematic Review.

-- react-text: 57 -->JavaScript is disabled on your browser. Please enable JavaScript to use all the features on this page. <! AECOSAN - 2016 - Report of the Scientific Committee of the Spanish Agency for Consumer Affairs, Food Safety and Nutrition (AECOSAN) on allergy to Anisakis. Journal of Animal and Veterinary Advances - 2010 - Prevalence of Anisakid Larvae in Marine Fishes Sold in Shenzhen, China. JOURNAL OF FOOD AND HEALTH SCIENCE 23/11/16 ANISAKIASIS: PARASITIC HAZARD IN RAW OR UNCOOKED SEAFOOD PRODUCTS AND PREVENTION WAYS. Veterinary Parasitology Volume 218, 15 March 2016, Scavenging hagfish as a transport host of Anisakid nematodes.

Host fish were caught off Moroccan coasts, where only Anisakis pegreffii is present, the sympatric area comprising Spanish coasts, and the Little Sole Bank fishing area from Nordeast Atlantic Ocean where the only present species is A. simplex sensu stricto(s.s.). Sequence variations in the amplification products were then assessed indirectly by digestion with restriction endonucleases or directly by sequencing for 623 L3 larvae. The sequences were used to infer the relationships between the two species under study using various methodological approaches. Medicine (Baltimore). 2015 Oct; 94(40): e1699. Previous Exposure to the Fish Parasite Anisakis as a Potential Risk Factor for Gastric or Colon Adenocarcinoma. Journal of Parasitology Research 25/12/15 First Record of Anisakis simplex Third-Stage Larvae (Nematoda, Anisakidae) in European Hake Merluccius merluccius lessepsianus in Egyptian Water. Int J Case Rep Images 2016;7 Small bowel occlusion due to Anisakis infection.