PATHOGENS 03/04/21 Biosurveillance of Selected Pathogens with Zoonotic Potential in a Zoo. Monitoring infectious diseases is one of the most important pillars of preventive medicine in zoos. Screening for parasitic and bacterial infections is important to keep animals and equipment safe from pathogens that may pose a risk to animal and human health. Zoos usually contain many different animal species living in proximity with people and wild animals. As an epidemiological probe, 188 animals (122 mammals, 65 birds, and one reptile) from a zoo in Slovenia were examined for selected pathogens. VETERINARY WORLD 05/09/17 Zoo agent's measure in applying the five freedoms principles for animal welfare. Research (Published online: 05-09-2017) 3. 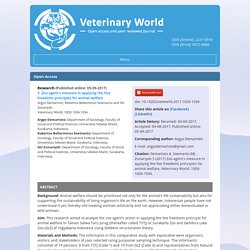 WAZA, founded in 1935, is a global organization of zoos and aquariums that promotes conservation and animal welfare. Unlike the U.S. -based Association of Zoos and Aquariums (AZA), which requires its members to undergo an accreditation process, WAZA is a member organization that doesn’t require accreditation. According to Gavrielle Kirk-Cohen, WAZA’s director of communications, the organization relies on its accrediting member associations to enforce their standards among their member zoos and aquariums. Becoming a WAZA member requires filling out an application, submitting letters of support from two other WAZA members, and paying a fee. Pointing fingers Stressful experiences. Microorganisms 2018, 6(3), 70; Zoonotic Fecal Pathogens and Antimicrobial Resistance in Canadian Petting Zoos.

This study aimed to better understand the potential public health risk associated with zoonotic pathogens in agricultural fairs and petting zoos in Canada. 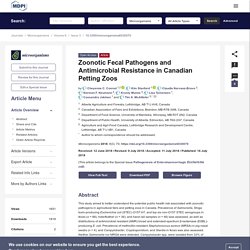 MANCHESTER METROPOLITAN UNIVERSITY - JUNE 2018 - MEASURING BEHAVIOR 2018. Au sommaire notamment: Measuring zoo animal welfare. JOURNAL OF ZOO AND AQUARIUM RESEARCH - 2019 - The use of Qualitative Behavioural Assessment to zoo welfare measurement and animal husbandry change. JOURNAL OF APPLIED ANIMAL WELFARE SCIENCE 16/10/18 Zoo Animal Welfare: The Human Dimension. Introduction As concern about the welfare of nonhuman animals in captivity increased during the past half-century, an initial response—starting in the 1970s for animals on farms and then spreading to animals in zoos and laboratories—was to develop standards and regulations based mostly on the environments in which animals are kept. 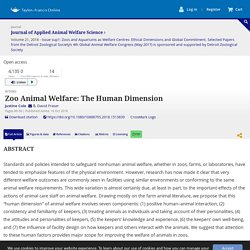 Key variables have traditionally included space allowance, air quality, noninjurious surfaces, and the availability of environmental enrichment and other features that animals use for comfort, security, or occupation. This emphasis on the environment arguably grew out of the much earlier tradition of laws that tried to protect workers in factories by requiring safer and healthier factory environments (Fraser, 2014 Fraser, D. (2014). Could animal production become a profession? Livestock Science, 169, 155–162. However, the focus on the animals’ environment has proven to be a very incomplete response to animal welfare concerns.

Positive human–animal interaction. JOURNAL OF APPLIED ANIMAL WELFARE 16/10/18 Advances in Applied Zoo Animal Welfare Science. Introduction Nonhuman animal welfare refers to the state of the animal as perceived by the animal himself or herself with regards to their ability to cope (Bracke, Spruijt, & Metz, 1999 Bracke, M. 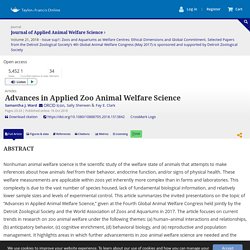 B. M., Spruijt, B. M., & Metz, J. H. “Animal welfare science” is the scientific study of the welfare state of animals that attempts to make inferences about how animals feel. INTERNATIONAL ZOO YEARBOOK 23/04/18 Studying primate personality in zoos: implications for the management, welfare and conservation of great apes. Studies into the Personality of Primates The study of personality in non‐human primates has been ongoing since at least the 1930s, although it was only since around the 1990s that it attracted the attention of more than a handful of researchers (Whitham & Washburn, 2017). 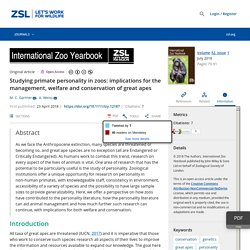 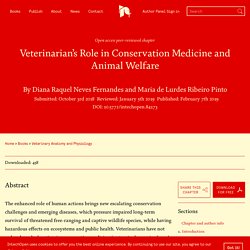 Introduction Current extinction rates are outstandingly high (about 1000 times previously valued ones) and likely to be underestimated once biodiversity statistics are affected by a gap of information on species taxonomy, distribution and status [1]. The enhanced role of human actions brings new escalating conservation challenges and emerging diseases, which pressure impaired long-term survival of threatened free-ranging and captive wildlife species, while having hazardous effects on ecosystems and public health [2, 3, 4]. Biodiversity conservation currently requires a broader approach, capable of connecting interdisciplinary bridges between the diversity of social, economic, political and biological variables which influence health issues, so to understand their complex interaction and therefore find new solutions bearing in mind human and animal well-being while preserving ecosystems, in what is designated as the “OneHealth” approach. 2.

Table 1. FRONT. VET. SCI. 18/12/18 Animal Welfare in Conservation Breeding: Applications and Challenges. Introduction A good state of welfare is generally representative of animals that are well nourished, safe, lack pain, fear, and distress, and have the ability to develop and express species-typical relationships, behaviors, and cognitive abilities (1–3). 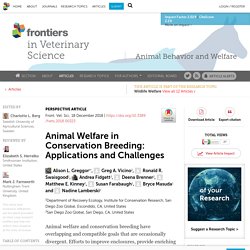 Measuring and accomplishing these aims requires tailored approaches, since the needs of every species (and individual) can be different. Moreover, an animal's welfare state can change temporally, with development, or with fluctuating external stressors (2). Therefore, welfare goals need to be assessed with regularity, even when management actions have not changed.

At San Diego Zoo Global (SDZG), we address the necessity and complexity of meeting the needs of species and individual animals through our Opportunities to Thrive program (Table 1). Table 1. One SDZG program that has embraced the Opportunities to Thrive in pursuit of conservation breeding goals is the Hawaii Endangered Bird Conservation Program (HEBCP). Table 2. Conclusions 2. EUROPA_EU - JULY 2015 - EU Zoos Directive Good Practices Document. ANIMALS 30/04/19 Special Issue "Human Influences on the Behaviour and Welfare of Zoo Animals" This ethical discourse specifically deals with dilemmas encountered within zoological institutions, namely for the concept of natural living, and a new term—wilding. 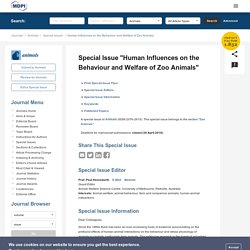 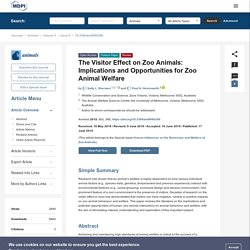 PARLEMENT EUROPEEN - Réponse à question P-001977-19 Breeding Annex A specimens for conservation benefits pursuant to the Zoos Directive and Council Regulation (EC) 338/97. ANIMALS 28/07/18 An Animal Welfare Risk Assessment Process for Zoos. 4.1. Interpretation of Trial Results The trial of the welfare risk assessment process demonstrated its practicality and effectiveness in identifying areas of welfare risk in a wide range of species in a zoo setting. The decrease in average welfare scores at each of the three zoos in 2017 reflects an increase in the number of welfare risks identified.

At first glance, this may appear to suggest a deterioration in conditions and welfare level over time. However, upon further consideration, many of the welfare risks newly identified in the 2017 assessments were in fact present in the two previous years but were not identified or scored to the same degree. THE ROYAL SOCIETY 27/03/19 Long-term trends in wild-capture and population dynamics point to an uncertain future for captive elephants. Microorganisms 2018, 6(3), 70; Zoonotic Fecal Pathogens and Antimicrobial Resistance in Canadian Petting Zoos. PARLEMENT EUROPEEN - Réponse à question E-003940-18 Update on the licencing and inspection of zoos in Greece.

Council Directive 1999/22/EC on the keeping of wild animals in zoos aims to strengthen the role of zoos in the conservation of biodiversity. It calls on Member States to adopt measures for the licensing and inspection of zoos in order to ensure that zoos respect certain conservation and protection measures, including appropriate accommodation for animals. Member States are responsible for applying the provisions of the Zoos Directive and ensuring their necessary enforcement.

The Commission carried out a Regulatory Fitness and Performance Programme (REFIT) evaluation of the directive which was finalised in July 2017. The publication of the Commission staff working document on the results of the evaluation is planned for the third quarter of 2018. Cienc. Rural vol.46 no.5 Santa Maria May 2016 Detection of resistance genes and evaluation of water quality at zoo lakes in Brazil.

PAKISTAN J ZOOL - 2018 - Impact of Different Captive Environmental Conditions on Behavior of African Lions and their Welfare at Lahore Zoo and Safari Zoo, Lahore. ANIMAL WELFARE - 2017 - Circus and zoo animal welfare in Sweden: an epidemiological analysis of data from regulatory inspections by the official competent authorities. Good animal welfare is crucial for the success of circuses and zoos. Epidemiological studies of animal welfare that investigate associations between animal-based measures (ABMs) and resource- and management-based measures are needed.

However, due to the relatively low numbers of animals within each species kept at individual facilities, such investigations can be difficult to carry out. BIAZA (British & Irish association of Zoos) May 2011 Guidance on Management of Zoonoses in zoos. One Health Volume 3, June 2017, Zoos and public health: A partnership on the One Health frontier. JavaScript is disabled on your browser. Please enable JavaScript to use all the features on this page. Abstract. VETERINARY WORLD 05/09/17 Zoo agent's measure in applying the five freedoms principles for animal welfare. PLOS 14/07/16 Housing and Demographic Risk Factors Impacting Foot and Musculoskeletal Health in African Elephants [Loxodonta africana] and Asian Elephants [Elephas maximus] in North American Zoos. Abstract For more than three decades, foot and musculoskeletal conditions have been documented among both Asian [Elephas maximus] and African [Loxodonta africana] elephants in zoos.

PLOS 14/07/16 Determining Connections between the Daily Lives of Zoo Elephants and Their Welfare: An Epidemiological Approach. Abstract. PARLEMENT EUROPEEN - Réponse à question E-005656-16 Assessment of the Zoos Directive. It is my understanding that Council Directive 1999/22/EC of 29 March 1999 on the keeping of wild animals in zoos (the Zoos Directive) and its application will be assessed this year as part of the Commission's REFIT programme of the EU's biodiversity policy. In 2011, the EU Zoo Inquiry(1), conducted by the Born Free Foundation, found that implementation and enforcement of the Zoos Directive was poor, that zoos were routinely failing to meet the species-specific requirements of the animals and that Member State competent authorities lacked the knowledge and training required to fulfil their responsibilities.

Will the Commission, as part of the REFIT programme, consult the Member State competent authorities and ensure that they are competent in the enforcement of the legal requirements and the inspection of zoos? PLOS 01/05/14 Emerging Infectious Diseases in Free-Ranging Wildlife–Australian Zoo Based Wildlife Hospitals Contribute to National Surveillance. Abstract Emerging infectious diseases are increasingly originating from wildlife.

Medical and Veterinary Entomology 06/03/12 Blood-feeding ecology of mosquitoes in zoos. HSE - 2012 - Managing health and safety in zoos. Date of publication: Series code: Price: Download a free copy This guidance contains practical advice for those responsible for the operation of zoos, such as zoo operators, safety representatives and managers. It applies to establishments of any size where wild animals are kept for exhibition to the public including aquariums, sanctuaries, bird gardens and safari parks. Specific hazards and risks associated with zoos are covered, as well as common issues such as slips and trips, manual handling and vehicle movements.

The guidance contains recommendations on how to ensure effective arrangements for the safety, health and welfare of employees and others who might be affected by zoo work activities (eg volunteers, veterinary surgeons, contractors, the general public etc). Previously published as Web15, this guidance has been revised to take into account changes to the Reporting of Injuries, Diseases and Dangerous Occurrences Regulations.