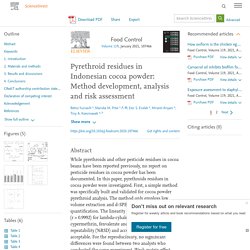 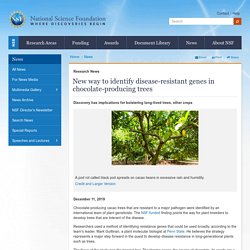 KWAME NKRUMAH UNIVERSITY OF SCIENCE AND TECHNOLOGY - JUILLET 2016 - Thèse en ligne : ASSESSMENT OF FARMERS RESPONSE TO GOOD AGRICULTURAL PRACTICES (GAP) TRAINING BY (CHED) AND ITS EFFECT ON THE QUALITY OF COCOA BEANS IN NKAWIE COCOA DISTRICT. INTECH 05/10/11 Use of Pesticides in the Cocoa Industry and Their Impact on the Environment and the Food Chain. INT. J. CURR. MICROBIOL. APP. SCI. - 2017 - Development and Evaluation of Integrated Pest Management Strategy against Sucking Pest Complex of Cocoa, Theobroma cacao L. Greener Journal of Medicinal Plant Research - 2018 - Effects of Extracts of Some Botanicals against Three Species of Fungi Isolated from Cocoa (Theobroma cacoa L.) Pods. 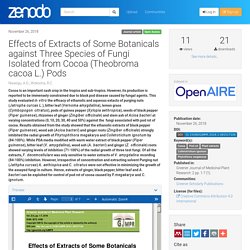 Cocoa is an important cash crop in the tropics and sub-tropics. However, its production is reported to be immensely constrained due to black pod disease caused by fungal agents. GRAPHIC BUSINESS 20/11/18 Cocoa pollination initiative to change face of the golden pod. • Mr Emmanuel Nii-Arku Odai (second left) together with Abdul-Majid (left), Mr Philip Appiah Boakye (In green T-shirt) and Mr Kwame Oppong (standing at the back) admiring cocoa trees with several pods. 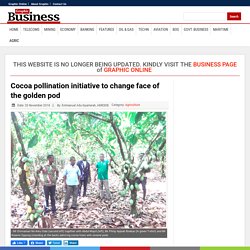 Several interventions have, therefore, been adopted by COCOBOD to enable cocoa farmers to improve on their yield and earn more profits while farming on their small pieces of land without clearing the forest in the face of climate change.While the moribund and diseased cocoa farms are being destroyed for replanting, low-yielding cocoa farms are undergoing artificial pollination to increase their yields. Success storyPhilip Appiah Boakye is a 47-year-old cocoa farmer at Akrodie, near Goaso in the Asunafo North municipality of the Brong Ahafo Region.A construction technician by profession, he abandoned this work and embarked on cocoa farming 14 years ago. 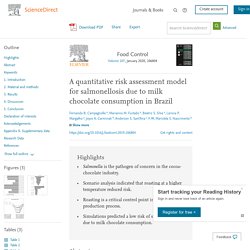 Introduction Chocolate stands as a popular confectionery product widely consumed in several countries. Brazil has a mean per capita consumption of 2.5 kg/year and figures amongst the major cocoa farmers and manufacturers in the world (ICCO, 2014; ABICAB, 2018). Moreover, it is one of the few countries in the world in which all steps of the manufacturing chain are performed, from the cocoa plantation and harvesting to chocolate making. Despite being highly appreciated, chocolate products have been involved in foodborne disease outbreaks caused by bacterial pathogens (Bean & Post, 2014). MYJOYONLINE 28/01/19 Chemical for enhancing cocoa production threaten hand pollination programme. In a bid to boost Ghana’s cocoa production, the government introduced the Hand Pollination Programme in 2017, an artificial process where the pollen is taken from the flower on the same tree or nearby trees and attached to or dropped on the stigma leading to cross-pollination. 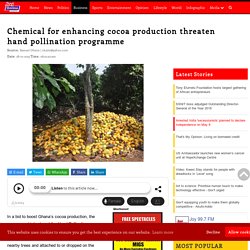 The process allows many flowers to be pollinated a just one day, resulting in massive fertilisation and cherrelle development. Over the years, many Ghanaian cocoa farmers have complained about low crop yields and its resultant effects on their financial fortunes as such the introduction of such novelty has come as good news to cocoa farmers in the country. While presenting the mid-year Budget Review and Economic Planning statement to Parliament on Monday, July 31, 2017, Finance Minister, Ken Ofori-Atta, said it was the objective of the government to reverse the “declining trend and to increase production to more than one million tonnes per annum within the next four years.” EFSA 20/11/18 Extensive literature search, selection for relevance and data extraction of studies related to the toxicity of PCDD/Fs and DL‐PCBs in humans.

EFSA 20/11/18 Risk for animal and human health related to the presence of dioxins and dioxin‐like PCBs in feed and food. EFSA 20/11/18 Setting of an import tolerance for mandipropamid in cocoa beans. WORLDS TOP EXPORTS 15/07/18 Chocolate Imports by Country. International purchases of imported chocolate totaled US$28.5 billion in 2019.Overall, the value of chocolate imports rose by 12% for all importing countries since 2015 when international purchases of chocolate cost $25.5 billion. 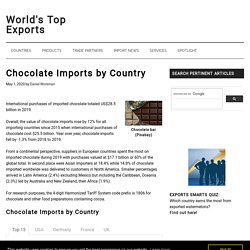 Year over year, chocolate imports fell by -1.3% from 2018 to 2019.From a continental perspective, suppliers in European countries spent the most on imported chocolate during 2019 with purchases valued at $17.1 billion or 60% of the global total. In second place were Asian importers at 18.4% while 14.8% of chocolate imported worldwide was delivered to customers in North America. Smaller percentages arrived in Latin America (2.4%) excluding Mexico but including the Caribbean, Oceania (2.3%) led by Australia and New Zealand, then Africa (1.9%).For research purposes, the 4-digit Harmonized Tariff System code prefix is 1806 for chocolate and other food preparations containing cocoa. 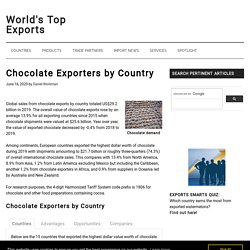 The overall value of chocolate exports rose by an average 13.9% for all exporting countries since 2015 when chocolate shipments were valued at $25.6 billion. Year over year, the value of exported chocolate decreased by -0.4% from 2018 to 2019.Among continents, European countries exported the highest dollar worth of chocolate during 2019 with shipments amounting to $21.7 billion or roughly three-quarters (74.3%) of overall international chocolate sales. This compares with 13.4% from North America, 8.9% from Asia, 1.2% from Latin America excluding Mexico but including the Caribbean, another 1.2% from chocolate exporters in Africa, and 0.9% from suppliers in Oceania led by Australia and New Zealand.For research purposes, the 4-digit Harmonized Tariff System code prefix is 1806 for chocolate and other food preparations containing cocoa. 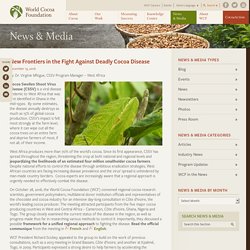 Virginie Mfegue, CSSV Program Manager – West Africa Cocoa Swollen Shoot Virus Disease (CSSV) is a viral disease endemic to West Africa that was first identified in Ghana in the mid-1930s. By some estimates, the disease annually destroys as much as 15% of global cocoa production. CSSV’s impact is felt most strongly at the farm level, where it can wipe out all the cocoa trees on an entire farm and deprive farmers of most, if not all, of their income. 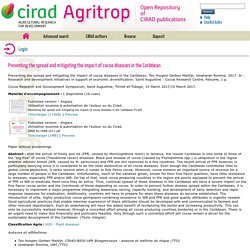 Ten Hoopen Gerben Martijn, Umaharan Romina. 2017. In : Research and development initiatives in support of economic diversification, Résumé, 1 p. Cocoa Research and Development Symposium, Saint Augustine, Trinité-et-Tobago, 15 March 2017/15 March 2017. Matériel d'accompagnement : 1 diaporama (10 vues) Paper without proceedings Abstract : With the arrival of frosty pod rot (FPR, caused by Moniliophthora roreri) in Jamaica, the insular Caribbean is now home to three of the “big five” of cocoa (Theobroma cacao) diseases. THE GUARDIAN 13/09/17 'Once this was all trees, but they burned them to plant cocoa': the ruin of West Africa's rainforest.

Sinewy, silvery trees rise from the green landscape of Marahoué national park, their smooth trunks supporting branches only at the very top. Marahoué is one of eight national parks in Ivory Coast and 20 years ago it was covered by forest and home to chimpanzees and elephant herds. Now it is more common to see the skeleton of a tree, slowly burnt by fire to get rid of the shadow it casts over cocoa fields, or just a sawn-off stump.

Henri, a traditional leader from the nearby town of Diafla, grew up with the forest, and speaks lovingly of its towering iroko trees – but he had a hand in destroying it. Like many others, he has cocoa plantations inside the park and employs people from Burkina Faso to work on them. “This all used to be trees, but farmers burned them to plant cocoa,” Henri says. Nobody uses the word “village” for Zanbarmakro, preferring the more temporary-sounding “camp”. Behind him is a big mural with the Rainforest Alliance symbol and a list of forbidden activities. INT. J. CURR. MICROBIOL. APP. SCI. - 2017 - Development and Evaluation of Integrated Pest Management Strategy against Sucking Pest Complex of Cocoa, Theobroma cacao L.

BIOVERSITY INTERNATIONAL - AOUT 2014 - Technical guidelines for the safe movement of Cacao germplam. Recent Advances in Automatic Control, Modelling and Simulation - 2013 - Salmonella Contamination in Chocolate Products: Simulation Model and Scenario Analysis. International Food Research Journal 20(4): 1771-1781 (2013) Application of ISO 22000 in comparison with HACCP on industrial proc. PLOS 16/04/14 Chocolate Milk Consequences: A Pilot Study Evaluating the Consequences of Banning Chocolate Milk in School Cafeter. Objectives Currently, 68.3% of the milk available in schools is flavored, with chocolate being the most popular (61.6% of all milk).

If chocolate milk is removed from a school cafeteria, what will happen to overall milk selection and consumption? Methods In a before-after study in 11 Oregon elementary schools, flavored milk–which will be referred to as chocolate milk–was banned from the cafeteria. Milk sales, school enrollment, and data for daily participation in the National School Lunch Program (NSLP) were compared year to date.

SUSTAINABLE COCOA INITIATIVE 02/04/12 Cocoa Breeding to Enhance Production and Combat Disease in Ecuador. Ecuador has a unique, rich 400-year history of cocoa farming, and great strides are currently underway to enhance production and combat diseases in this country that together with Peru, features the most diverse cocoa genetic diversity in the world. Mars Chocolate, in partnership with the INIAP – the national research institute of Ecuador – is investing in an innovative cocoa breeding program that will help develop more productive plants for Ecuadorian cocoa farmers and thanks to the learning developed there, the program will also provide important knowledge for cocoa research institutes in other countries. ARS USDA 26/09/11 New Flavors Emerge from Peruvian Cacao Collection Trip. By Sharon DurhamSeptember 26, 2011 New cacao types with unique flavors that are distinctly Peruvian have been identified by U.S.

Department of Agriculture (USDA) scientists. These new flavors could one day be marketed like wine, by geographical provenance. 55th National Conference of the Australian Agricultural and Resource Economics Society Melbourne, Australia 8 – 11 February 2011.