VETERINARY SCIENCES 17/09/20 How the Infestation Level of Varroa destructor Affects the Distribution Pattern of Multi-Infested Cells in Worker Brood of Apis mellifera. The mite Varroa destructor, the main ectoparasite of honey bees, is a threat to apiculture worldwide. 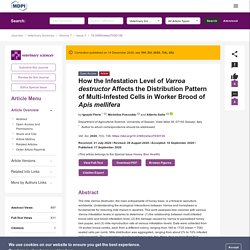 Understanding the ecological interactions between Varroa and honeybees is fundamental for reducing mite impact in apiaries. This work assesses bee colonies with various Varroa infestation levels in apiaries to determine: (1) the relationship between multi-infested brood cells and brood infestation level, (2) the damage caused by Varroa to parasitized honey bee pupae, and (3) mite reproduction rate at various infestation levels. Data were collected from 19 worker brood combs, each from a different colony, ranging from 160 to 1725 (mean = 706) sealed cells per comb.

Mite distribution was aggregated, ranging from about 2% to 74% infested cells per comb. The percentage of cells invaded by one, two, three, four, or more than four foundress mites, as a function of infestation level, was estimated by five highly significant (p < 0.0001) second-degree polynomial regression equations. 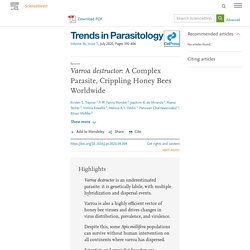 Varroa is also a highly efficient vector of honey bee viruses and drives changes in virus distribution, prevalence, and virulence. Despite this, some Apis mellifera populations can survive without human intervention on all continents where varroa has dispersed. Scientists and specialist breeders are advancing marker-assisted selection techniques to enrich naturally occurring varroa-resistance traits in commercial stock – an approach predicted to be most effective when combined with culling susceptible colonies. TNTRIBUNE 30/03/21 Australian State Wants Artificial Intelligence To Protect Its Bees. MELBOURNE, Australia — Varroa destructor is a deadly stowaway that port authorities are determined to keep away from the bee population in the southeast Australian state of Victoria. 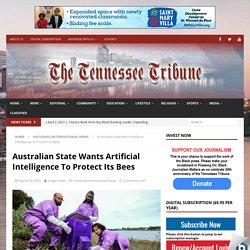 Artificially intelligent beehives are being installed at Victorian ports to detect pests as they arrive at ships rapidly. “The Varroa mite is extremely destructive; it kills bees very rapidly,” said Mary-Anne Thomas, the Victorian agriculture minister. “I would look forward to a project like the Purple Hive rolling out across the country. This is world-leading technology.” Purple Hive was launched on March 29 at the Port of Melbourne — a solar-powered device that detects Varroa destructor, a mite that feeds on honey bees. Using artificial intelligence and cameras, Purple Hive provides alerts in real-time and has been trialed in New Zealand, where the mite is established. 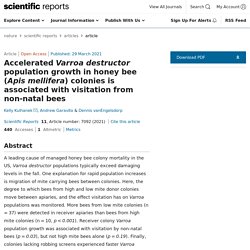 Receiver apiaries consisted of four colonies each, housed in either a single 10 frame Langstroth deep brood box (n = 28) or one 10 frame Langstroth deep and one 10 frame Langstroth medium brood box (n = 4). All receiver colonies were established from splits with new queens in August 2019 to equalize colony strength and facilitate movement into the experimental location. Each receiver colony was made of seven frames of adult bees, three frames of brood, and two frames of honey. Receiver colonies were moved into the experimental location on August 30th, and received a Varroa treatment (Mite Away Quick Strips, NOD Apiary Products, Alberta, CAN) from September 18th to September 24th to ensure low initial mite loads. SCIENTIFIC REPORTS 14/01/21 Introduction of Varroa destructor has not altered honey bee queen mating success in the Hawaiian archipelago.

SCIENTIFIC REPORTS 09/12/20 Evaluation of potential miticide toxicity to Varroa destructor and honey bees, Apis mellifera, under laboratory conditions. Few laboratory or field toxicity investigations have targeted testing the efficacy and safety of commercial miticides on V. destructor and A. mellifera24,25,26. 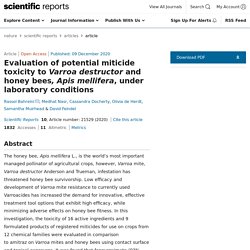 Among the AIs, etoxazole and fenazaquin had the highest mite control efficacy with minimal effects on honey bees. Beekeepers use a variety of miticides to control Varroa mite populations including Apivar (amitraz). Yashima discovered etoxazole from the oxazoline chemical class in the 1980s40. Research in Veterinary Science Volume 135, March 2021, Impact of Varroa destructor and associated pathologies on the colony collapse disorder affecting honey bees. Highlights Varroa's association with other pathogens determines the dead of the honey bee hives. 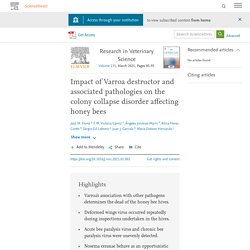 Deformed wings virus occurred repeatedly during inspections undertaken in the hives. Acute bee paralysis virus and chronic bee paralysis virus were unevenly detected. Nosema ceranae behave as an opportunistic pathogen. PLOS 24/11/20 Varroa destructor mites vector and transmit pathogenic honey bee viruses acquired from an artificial diet. Abstract The ectoparasitic mite Varroa destructor is one of the most destructive pests of the honey bee (Apis mellifera) and the primary biotic cause of colony collapse in many regions of the world. 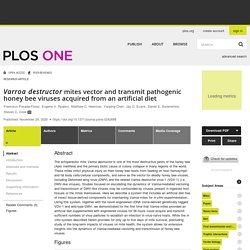 These mites inflict physical injury on their honey bee hosts from feeding on host hemolymph and fat body cells/cellular components, and serve as the vector for deadly honey bee viruses, including Deformed wing virus (DWV) and the related Varroa destructor virus-1 (VDV-1) (i.e., DWV-like viruses). Studies focused on elucidating the dynamics of Varroa-mediated vectoring and transmission of DWV-like viruses may be confounded by viruses present in ingested host tissues or the mites themselves. 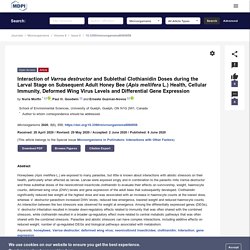 Introduction High mortality rates of honeybee (Apis mellifera L.) colonies have been a major concern for the beekeeping industry in recent years in North America and parts of Europe [1,2]. Several factors have been linked to high bee mortality, including the ectoparasitic mite Varroa destructor, viral infections (e.g., deformed wing virus; DWV), and exposure to neonicotinoid insecticides [3,4]. However, honeybees are exposed to multiple stressors that may interact and impact honey bee health and consequently increase colony mortality. Neonicotinoids are systemic organic insecticides composed of active nicotine-like molecules, which act as nicotinic acetylcholine receptor (nAChRs) agonists at the synaptic membranes in the central nervous system of insects, causing a neurotoxic effect [5]. At the molecular level, neonicotinoids can affect a variety of genes of honeybees with different functions, such as immunity, detoxification and neural related genes [18,19,20]. 2. 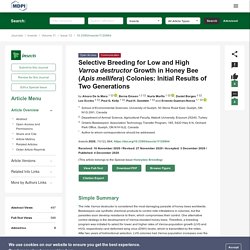 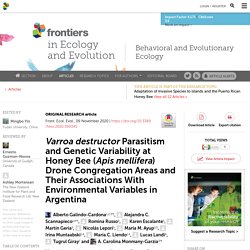 No other pathogen has had a comparable impact on honey bee health and colony survival during the history of apiculture (Guzmán-Novoa et al., 2010; Le Conte et al., 2010; Neumann and Carreck, 2010; Francis et al., 2013). The dynamics of V. destructor populations and the impact of mite parasitism in honey bee colonies are influenced by the genotype of the bees (Guzmán-Novoa et al., 1999; Rosenkranz, 1999; Martin and Medina, 2004; Invernizzi et al., 2015; Merke, 2016) and by the environment (Meixner et al., 2015; Giacobino et al., 2017). For example, Africanized bees are more resistant to the Varroa mite than European bees in many South and Central American regions (Martin and Medina, 2004; Mondragón et al., 2005) and in Puerto Rico (Rivera-Marchand et al., 2012).

EMERG TOP LIFE SCI - 2020 - Varroa destructor: how does it harm Apis mellifera honey bees and what can be done about it? Between 2015 and 2020, the behaviour of V. destructor, its genetics and physiology, have become more precisely understood. Its life cycle can be separated into two phases: the phoretic phase and the reproductive phase. The phoretic phase only concerns the female mite which uses the adult bee as a ‘transportation vector' and food source. During this phase, bees unintentionally take part in the spreading of Varroa within and between honey bee colonies.

They produce honey and beeswax that are important global commodities. The global economic value of bees in terms of pollination in agricultural crops is estimated to be between US$235 and US$577 billion a year (UN Environment 2016), while the global honey market size stands at 7.70 billion USD (Zion Market Research 2019). There has been a growing demand for the bee products like honey due to consumer preferences towards healthy nutrition and natural alternatives to chemical artificial sweeteners in food and beverages, personal care and cosmetics and pharmaceuticals.

Honey bees (Apis mellifera L.) are exposed biotic and abiotic stressors but little is known about their combined effect and impact on neural processes such as learning and memory, which could affect behaviours that are important for individual and colony survival. This study measured memory with the proboscis extension response (PER) assay as well as the expression of neural genes in bees chronically exposed to three different sublethal doses of the insecticide clothianidin and/or the parasitic mite Varroa destructor. The proportion of bees that positively responded to PER at 24 and 48 h post-training (hpt) was significantly reduced when exposed to clothianidin. V. destructor parasitism reduced the proportion of bees that responded to PER at 48 hpt. Combined effects between the lowest clothianidin dose and V. destructor for the proportion of bees that responded to PER were found at 24 hpt. ►▼ Show Figures.

ABC_NET_AU 29/03/21 New artificial intelligence technology used to protect bees from Varroa Destructor mite. Australia has a new weapon in the fight against the Varroa Destructor mite that has devastated bee populations in other countries and wrecked industries worth hundreds of millions of dollars. Key points: The new sentinel hives can photograph bees and detect any abnormalitiesThe technology involves a 360 degrees camera and artificial intelligenceBiosecurity inspectors say it will make detection of threats such as Varroa mites much easier A trial is underway at the Port of Melbourne involving new sentinel hives that use high-tech cameras and artificial intelligence to detect the mite on bees that can hitch a ride to Australia on container ships.

The hives are purple because bees apparently love purple. The project is being trialled alongside existing sentinel hives at the Port of Melbourne after the success of earlier attempts in New Zealand, where the Varroa Destructor wreaked havoc on the local bee industry. An algorithm then helps to identify anything unusual about a bee's appearance. Journal of Insect Physiology 59 (2013) 487–493 Interactive effect of reduced pollen availability and Varroa destructor infestation limits growth and protein content of young honey bees. SENSORS 29/04/20 The Effectiveness of Varroa destructor Infestation Classification Using an E-Nose Depending on the Time of Day. Honey bees are subject to a number of stressors. In recent years, there has been a worldwide decline in the population of these insects. Losses raise a serious concern, because bees have an indispensable role in the food supply of humankind.

Meanwhile, colony losses have reached a level of 30.7% in 2018 in the USA (Bruckner et al., 2018), and mean mortality of European colony losses has remained lower (11.22% in 2014) (Jacques et al., 2016). Widespread all over the world, the Varroa destructor mite has adapted to the developmental stages of the honey bee and is a recurrent threat to honey bee populations (Ball, 1993). EXPERIMENTAL AND APPLIED ACAROLOGY 13/06/19 Coexistence of genetically different Varroa destructor in Apis mellifera colonies. ENTOMOLOGYTODAY 07/02/20 Varroa Mites: New Guide Outlines Integrated Pest Management Options. A growing consensus deems Varroa mite infestation to be the leading factor in the struggles of honey bees in managed hives around the world. A new profile in the open-access Journal of Integrated Pest Management details the biology and life cycle of the Varroa destructor mite and the IPM approach to control the devastating ectoparasites. (Photo by USGS Bee Inventory and Monitoring Lab, public domain)

ECOLOGICAL ENTOMOLOGY 09/06/16 Patterns in Varroa destructor depend on bee host abundance, availability of natural resources, and climate in Mediterranean apiaries.