THINKWITHGOOGLE - AVRIL 2016 - 2016 Food Trends on Google: The Rise of Functional Foods. How do millennials feed their growing interest in health and wellness? They search. In our new Food Trends Report we analyzed Google Search data to find five major trends. Here we share more insight on one, the rise of "functional foods," and why there's a big opportunity for brands. Written by Pedro Pina Published April 2016 Topics Put Google research and insight behind your thinking. RECENT PATENTS ON FOOD, NUTRITION & AGRICULTURE - 2012 - Fermented foods : patented approaches and formulations for nutritional supplementation and health promotion. INTERNATIONAL JOURNAL OF BUSINESS QUANTITATIVE ECONOMICS AND APPLIED MANGEMENT RESEARCH - OCT 2015 - THE FACTORS AFFECTING THE DECISION IN USING FUNCTIONAL FOOD OF VIETNAMESE CONSUMERS: A CASE STUDY OF HO CHI MINH CITY. LWT - Food Science and Technology Volume 68, May 2016, Consumers' attention to functional food labels: Insights from eye-tracking and change detection in a case study with probiotic milk. 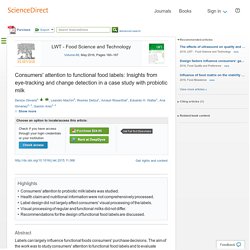 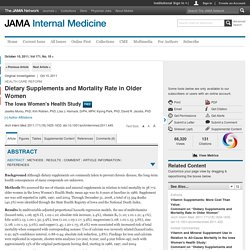 Accepted for Publication: June 6, 2011. Author Contributions: Dr Mursu had full access to all the data in the study and takes responsibility for the integrity of the data and the accuracy of the data analysis. Study concept and design: Jacobs. Acquisition of data: Robien, Harnack, and Jacobs. Analysis and interpretation of data: Mursu and Jacobs. Financial Disclosure: Dr Jacobs is an unpaid member of the Scientific Advisory Board of the California Walnut Commission. Funding/Support: This study was partially supported by grant R01 CA39742 from the National Cancer Institute and by grant 131209 from the Academy of Finland, the Finnish Cultural Foundation, and the Fulbright program's Research Grant for a Junior Scholar (the last 2 of which were granted to Dr Mursu). 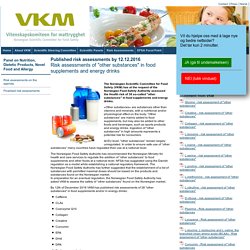 «Other substances» are substances other than vitamins and minerals, with a nutritional and/or physiological effect on the body. “Other substances” are mainly added to food supplements, but may also be added to other foods and beverages, such as sports products and energy drinks. Ingestion of "other substances" in high amounts represents a potential risk for consumers.

At EU level, "other substances” remain largely unregulated. In order to ensure safe use of “other substances” many countries have regulated their use at a national level. The Norwegian Food Safety Authority has recommended the Norwegian Ministry for health and care services to regulate the addition of “other substances” to food supplements and other foods at a national level. Wageningen University - FEV 2013 - Thèse en ligne : REGULATION OF FOOD SUPPLEMENTS (VITAMINS AND MINERALS) IN EU, US, AND THAILAND: A COMPARATIVE STUDY. VKM_NO 29/01/15 Risk assessment of folic acid in dietary supplements. The Norwegian Scientific Committee for Food Safety (VKM) has at the request of the Norwegian Food Safety Authority (NFSA) assessed whether the Tolerable Upper Intake Level (UL) of folic acid should be amended. 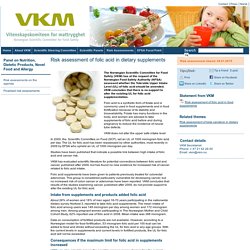 VKM concludes that there is no support to alter the existing UL for folic acid supplementation. Folic acid is a synthetic form of folate and is commonly used in food supplements and in food fortification because of its stability and bioavailability. Folate has many functions in the body, and women are advised to take supplements of folic acid before and during pregnancy to reduce the incidence of neural tube defects. VKM does not alter the upper safe intake level In 2000, the, Scientific Committee on Food (SCF), set an UL of 1000 microgram folic acid per day. Studies have been published that indicate a possible link between high intake of folic acid and cancer risk. Folic acid supplements have been given to patients previously treated for colorectal adenomas. TRENDS IN FOOD SCIENCE & TECHNOLOGY - 2011 - Functional foods development: Trends and technologies. 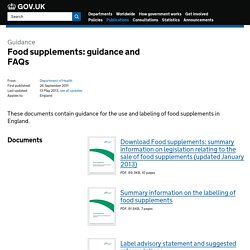 These guidance and summary documents have been updated to reflect this change and update references. The changes to the presentation of the documents do not represent a revision in the approach to guidance on the legislation. These documents are aimed at all food businesses that manufacturer, process, distribute, use, sell or import food supplements, and offer a quick guide to the compositional and labeling rules that apply to these products. Businesses seeking advice on the labeling of individual products should contact their local Trading Standards or Environmental Health Office. Comprehensive Reviews in Food Science and Food Safety - NOV 2013 - Defining the Public Health Threat of Dietary Supplement Fraud. A notable large-scale incident of adverse public health events caused by dietary supplement use occurred in 1989 when an association between dietary supplements containing of L-tryptophan and an outbreak of Eosinophilia Myalgia Syndrome emerged. 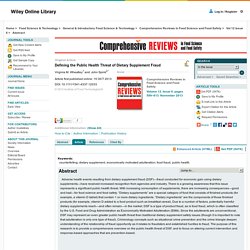 The Centers for Disease Control and Prevention (CDC) estimated that over 1500 people who had consumed the supplements subsequently experienced fatigue, shortness of breath, and other health effects. The CDC confirmed 38 deaths as a direct result of L-tryptophan consumption (FDA 2012e). Evidence revealed that the manufacturing company had taken cost-cutting shortcuts in the purification process. Work with genetically engineered bacteria had produced contaminated batches of L-tryptophan. Products made with the contaminated batches entered the market, and many people who used them experienced incurable, debilitating health effects. In 2004, the FDA also issued a ban on dietary supplements with ephedrine alkaloid ingredients. 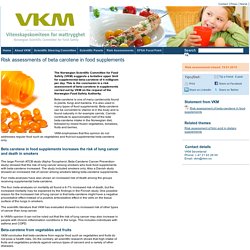 This is the conclusion in a risk assessment of beta-carotene in supplements carried out by VKM on the request of the Norwegian Food Safety Authority. World J Gastroenterol. 2013 March 14; 19(10): 1527–1540. Actual concept of "probiotics": Is it more functional to science or bus.

EXAMINER 04/08/10 Dietary supplements and health risks. This week, Consumer Reports released a report on their investigation entitled The 12 Most Dangerous Supplements. 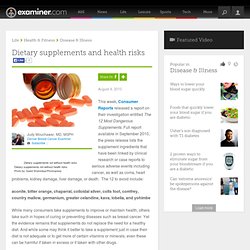 Full report available in September 2010, the press release lists the supplement ingredients that have been linked by clinical research or case reports to serious adverse events including cancer, as well as coma, heart problems, kidney damage, liver damage, or death. The 12 to avoid include: PLOS 18/03/14 Usage of Plant Food Supplements across Six European Countries: Findings from the PlantLIBRA Consumer Survey.

Background The popularity of botanical products is on the rise in Europe, with consumers using them to complement their diets or to maintain health, and products are taken in many different forms (e.g. teas, juices, herbal medicinal products, plant food supplements (PFS)). 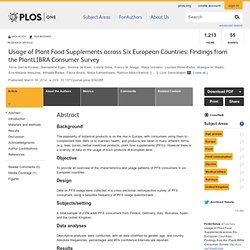 However there is a scarcity of data on the usage of such products at European level. Objective To provide an overview of the characteristics and usage patterns of PFS consumers in six European countries. Design. Asia Pac J Clin Nutr 2011;20 (2):327-336 Dietary supplements usage among elderly Taiwanese during 2005-2008. Paper prepared for presentation at the 1st AIEAA Conference ‘Towards a Sustainable Bio-economy: Economic Issues and Policy Chall. Nutr Res Pract. 2011 August; 5(4): 313–321. A study of consumers' perceptions and prediction of consumption patterns for generic.

NATIONAL KIDNEY FOUNDATION 14/02/13 Americans' Use of Dietary Supplements That Are Potentially Harmful in CKD. J Korean Med Sci. 2012 May;27(5):512-517. Prevalence of Dietary Supplement Use in Korean Children and Adolescents: Insights from. With improvement of economic state, there are increasing interests on "well-being" and how diet might influence the personal health. 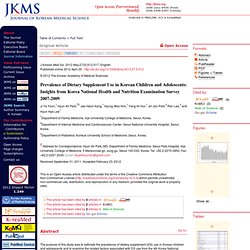 There are several reports that taking dietary supplements (DS) compensates the nutritional deficit derived from unbalanced diets (1), improves physical health and personal performance in occupation, and as well as prevents diseases (2). Furthermore, many people believe that the more DS they take, the healthier they will be, so that up to one third of study participants took two or more types of DS simultaneously (3). However, it is unknown whether DS intake improves health of otherwise healthy persons who have balanced diet or improve study ability. In addition, there could be drug-DS interactions or DS-DS interactions which might lead to adverse drug reactions or alter the clinical response of prescribed medication (4).

Study subject. Appetite Volume 58, Issue 1, February 2012, Functional food and satiety. Impact of a satiating context effect on appetite contro. Abstract The aim of this study was to verify if the addition of satiating nutrients and a satiating context effect could influence appetite sensations, spontaneous energy intake and food appreciation under conditions of standardized energy density of a meal. Eighteen non-obese men were submitted to a control, a satiating, and a context effect condition composed of a standardized breakfast and an ad libitum test lunch (macaroni entrée plus chocolate cake). The satiating macaroni contained more proteins, unsaturated fats, fibres and calcium than the control macaroni despite similar energy density, appearance and palatability. In the context effect condition, participants believed they were eating “a highly satiating macaroni”, but were served the control macaroni. Food Research International Volume 44, Issue 10, December 2011, Meat as a functional food with special reference to probiotic sa.