SOCIAL SCIENCES 07/03/19 Global Crop Value Chains: Shifts and Challenges in South-North Relations. The worldwide importance of crop production is undisputed due to its function for basic nutrition of billions of people. 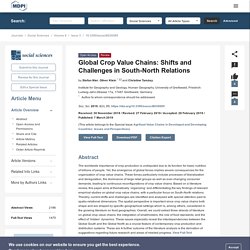 Yet, the emergence of global forces implies severe consequences for the organization of crop value chains. These forces particularly include processes of liberalization and deregulation, the dominance of large retail groups as well as ever-changing consumer demands, leading to continuous reconfigurations of crop value chains. Based on a literature review, this paper aims at thematically ‘organizing’ and differentiating the key findings of relevant empirical studies on global crop value chains, with a particular focus on South-North relations. Thereby, current shifts and challenges are identified and analysed with special attention paid to spatio-relational dimensions. UNIVERSITY OF GOETTINGEN - JANV 2020 - The uneven spread of Global G.A.P. certification.

During the last couple of decades, certifications’ role across the globe had taken a remarkable place with respect to meeting the international market demands for food security and safety. 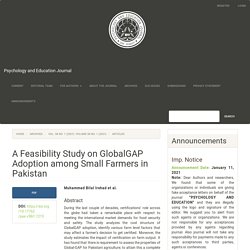 The study analyzes the cost structure of GlobalGAP adoption, identify various farm level factors that may affect a farmer’s decision to get certified. Moreover, the study estimates the impact of certification on farm output. It has found that there is requirement to assess the properties of Global-GAP for Pakistani agriculture; to attain this a complete methodological idea is essential. This part will explain the analysis methods, research methodology, research design, and data collection. It would make the agriculture sector of Pakistan more export oriented, yielding higher returns to the gross domestic production of the county. EUROPEAN REVIEW OF AGRICULTURAL ECONOMICS 04/06/19 Does GlobalGAP certification promote agrifood exports? 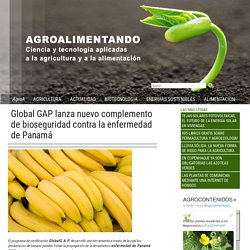 "The high demand for bananas results in the search for new destinations to try to obtain a better opportunity to place the fruit abroad satisfying the requirements of our customers," said Ivan Santos, president of Corporación Agrícola Banagreen in Ecuador. 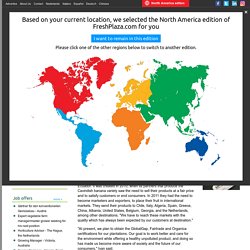 Corporacion Agricola Banagreen, was created in the province of El Oro in Ecuador. It was created in 2010, when its partners that produce the Cavindish banana variety saw the need to sell their products at a fair price and to satisfy customers or end consumers. In 2011 they had the need to become marketers and exporters, to place their fruit in international markets. FRESH PLAZA 29/03/17 62 Romanian crops awarded with Global G.A.P. certification. In 2017, a total of 62 Romanian fruit and vegetable crops have been awarded with the international quality certification for Good Agricultural Practices GLOBAL G.A.P., following a national program launched by Kaufland Romania to aid in the development of local producers. 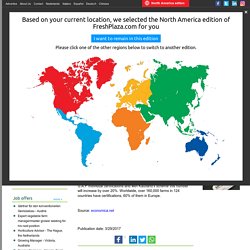 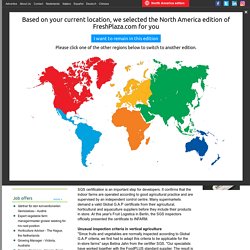 The Berlin-Based company INFARM develops and operates indoor greenhouses for supermarkets. With their new technology, herbs, leafy vegetables and lettuce are grown and harvested directly where consumers buy their food: in the store. In the closed systems the plants are automatically fed light, nutrients and water. FRESH PLAZA 22/09/17 First fruit and vegetable grower GlobalGAP GRASP certified in United States. Farm Fresh Produce, Inc. is fully compliant on the GLOBALG.A.P. 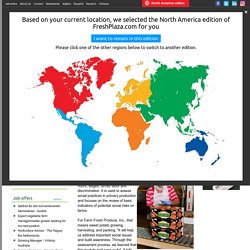 GRASP assessment, a social management system, as third-party verified by WQS, LLC. “It has become common in the industry to state that you have the highest quality or an innovative approach. Quality is relatively simple to measure, to prove. That sweet potato must taste good, look good. DTINEWS 24/02/12 Local farmers get rid of GlobalGAP. While local authorities and scientists have extended efforts to encourage more farmers to cultivate in line with the GlobalGAP or VietGAP standards, those following them have demanded a return to traditional practices. 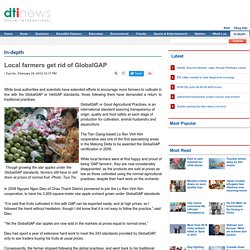 GlobalGAP, or Good Agricultural Practices, is an international standard assuring transparency of origin, quality and food safety at each stage of production for cultivation, animal husbandry and aquaculture. The Tien Giang-based Lo Ren Vinh Kim cooperative was one of the first specializing areas in the Mekong Delta to be awarded the GlobalGAP certification in 2008. While local farmers were at first happy and proud of being ‘GAP farmers’, they are now considerably disappointed, as the products are sold at prices as low as those cultivated using the normal agricultural practices, despite their hard work on the orchards. “Yet the GlobalGAP star apples are now sold in the markets at prices equal to normal ones.” No money, no GAP The renewal fee is around USD7,000, he said. Int. Jrnl. of Soc. of Agr. & Food, 15/07/14 Beyond the Public–Private Divide: GLOBALGAP as a Regulation Repository for Farmers.

IFAMA - 2013 - Smallholder Compliance with Private Standard Certification: The Case of GlobalGAP Adoption by Mango Producers in Peru. INT. JRNL. OF SOC. OF AGR & FOOD 07/02/10 Governing the global value chain: GLOBALGAP and the Chilean fresh fruit industry. EUROSEEDS_EU 06/06/16 What is GlobalGAP 5.0 ? Why is it important ? 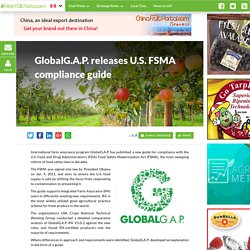 FSMA compliance guide January 05 , 2017 International farm assurance program GlobalG.A.P. has published a new guide for compliance with the U.S. Food and Drug Administration’s (FDA) Food Safety Modernization Act (FSMA), the most sweeping reform of food safety laws in decades. The FSMA was signed into law by President Obama on Jan. 4, 2011, and aims to ensure the U.S. food supply is safe by shifting the focus from responding to contamination to preventing it. The guide supports Integrated Farm Assurance (IFA) users in efficiently meeting new requirements. The organization’s USA Crops National Technical Working Group conducted a detailed comparative analysis of GlobalG.A.P. 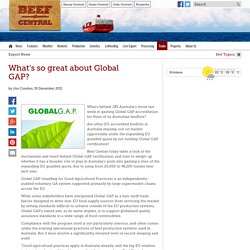 Are other EU-accredited feedlots in Australia missing-out on market opportunity under the expanding EU grainfed quota by not holding Global GAP certification? Beef Central today takes a look at the mechanism and merit behind Global GAP certification, and tries to weigh-up whether it has a broader role to play in Australia’s push into gaining a slice of the expanding EU grainfed quota, due to jump from 20,000 to 48,200 tonnes later next year. Unc student affaires - 2011 - A year of public service, a lifetime of global citizenship. INSTITUTE OF DEVELOPING ECONOMIES - MARS 2015 - Emergence of Asian GAPs and its relationship to GLOBAL G.A.P. Invited paper presented at the 4th International Conference of the African Association of Agricultural Economists, September 22-25, 2013, Hammamet, Tunisia - Empirical Analysis of the Environmental Benefits of Compliance with GLOBALGAP Standards Among Sma.

Invited paper presented at the 4th International Conference of the African Association of Agricultural Economists, September 22-25, 2013, Hammamet, Tunisia - Empirical Analysis of the Environmental Benefits of Compliance with GLOBALGAP Standards Among Smallholder Farmers in Eastern and Central Kenya: An Environmental Valuation Approach – guatemalt

University of Göttingen - 2013 - Geographic variation in global diffusion of private food standards: The case of GlobalGAP certification. JOURNAL OF DEVELOPMENT STUDIES 01/10/13 Is GlobalGAP Certification of Small-Scale Farmers Sustainable? Evidence from Thailand. HORTI DAILY 26/11/13 Europe :Renewed Global GAP for 2015: Input from processors welcome. Europe :Renewed Global GAP for 2015: Input from processors welcome Global GAP is working on a new Global GAP protocol, which is planned for 2015. During the first regional Global GAP conference this week at Veiling Hoogstraten in Belgium, the next step in the field of food safety and sustainability were discussed. In 2015, a new Global GAP will be introduced. The organization appeals to the entire chain and through local meetings seeks to collect industry input.

Guy Callebaut addresses the public in Veiling Hoogstraten "Sustainability is evolving and now holds a slightly different meaning than before," said Guy Callebaut, president of Global GAP, about regular adjustments to the guidelines. Sociology Mind 2013. Vol.3, No.1, 32-38 Reconciling Safety and Fairness in Global Agri-Food Standardization. Reconciling Safety and Fairness in Global Agri-Food Standardization Private food safety standards have recently emerged as a dynamic power in the global value chan. Good agricultural practices (GAP) is one such standard currently gaining popularity as a prominent field-level food quality assurance system. Achieving private GAP certification, most notably of GlobalGAP, is a dif ficult option for low income producers in the Global South due to the high costs required for necessary investments and certification. Selected Paper prepared for presentation at the International Association of Agricultural Economists (IAAE) Triennial Conference.

Paper prepared for presentation at the EAAE 2011 Congress - FEV 2011 - Public-private partnerships and GLOBALGAP standard adopti. Paper prepared for presentation at the EAAE 2011 Congress - AOUT/SEPT 2011 - Private standards and employment insecurity: Global. AGRIHUNT 10/02/12 Global GAP certification: seven livestock farms given letters of recommendation. Created on Friday, 21 December 2012 Written by Business Recorder Economic Co-ordination Committee (ECC) of the Cabinet is said to have unearthed a financial scam in the procurement of sugar by the Trading Corporation of Pakistan (TCP) in 2010 in violation of government directives, sources close to Secretary Industries told Business Recorder.

This scam was disclosed at a meeting of ECC on December 18, 2102 presided over by Finance Minister Dr Abdul Hafeez Shaikh when a summary of Commerce Ministry came under discussion on the disposal of 700 metric tons of imported sugar in the open market. Utility Stores Corporation (USC) had refused to lift "substandard" sugar, arguing that it is not only fine grain but also infested with stones and foreign particles. The sugar is of Indian, Brazilian and Middle Eastern origin and is stocked at the TCP''s Pipri godowns. Copyright Business Recorder, 2012 Your Comments, Views or Suggestions about this article: FRUITNET 10/02/12 GlobalGAP to boost emerging growers. FRESHPLAZA 24/02/12 GlobalGap approves Haromised Standards.

Produce industry one step closed to goal - "one audit by any credible thrid party acceptable to all buyers"GlobalGap approves Harmonised Standards GlobalGap has approved the use of Harmonized Standards as the basis of its checklist for US food safety, GFSI (Global Food Safety Initiative) level certification audits. This brings the produce industry a step closer to the goal of “one audit by any credible third party acceptable to all buyers.

“The US NTWG (National Technical Working Group) drafted a comparison of the GlobalGAP food safety standards with the Harmonized Standards, found great compatibility, and submitted that comparison to GlobalGAP as a proposed national interpretation guideline,” said Dr David Gombas, United Fresh senior vice-president of food safety and technology, who serves as coordinator of the GlobalGAP NTWG for the United States. FRESHPLAZA 24/02/12 Vietnam: Growers turning their back on GlobalGap. Return to traditional practice the result of costs and work for little return farmers sayVietnam: Growers turning their back on GlobalGap Disappointed farmers in Vietnam are turning their backs on GlobalGap and VietGap accreditation, despite the fact that the country would like to see exports grow. The problem, growers say, is that they don't actually see much more money for produce grown once they have the accreditation and compliance with regulations is time consuming and hard work.

Only around 30% of GlobalGap grown produce in the country is receiving higher prices and these have been described as "slight. " Also, traders are not only not paying the right amount of money for the produce they are not buying all of it - which means the remainder must be sold at markets for the normal price.