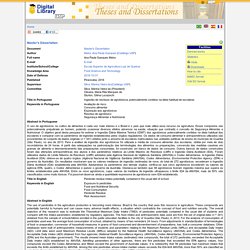 REUTERS/BBC/ALJAZEERA 03/04/15 Why Brazil has a big appetite for risky pesticides. SPUTNIK 11/01/17 Beemageddon: Pesticides Kill Over 10 Million Pollinators in Brazil. Latin America Get short URL In a matter of days, 136 beehives in the municipality of Porto Ferreira were destroyed. 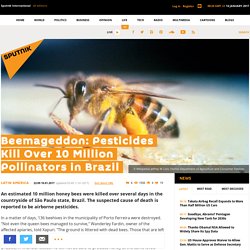 "Not even the queen bees managed to survive," Wanderley Fardin, owner of the affected apiaries, told Xapuri. "The ground is littered with dead bees. Those that are left are flying about with nowhere to go. " The offending pesticides were sprayed on a nearby sugarcane field. Environ Sci Pollut Res Int. 2016 Oct;23(19):19723-34. Evaluating genotoxic risks in Brazilian public health agents occupationally exposed to pesticides: a multi-biomarker approach. Environ. Sci.: Processes Impacts, 2016,18, 779-787 Pesticides in Brazilian freshwaters: a critical review. Food Sci. Technol, Campinas, 36(1): 40-48, Jan.-Mar. 2016 Evaluation of pesticide residues in oranges from São Paulo, Brazil.

FOLHA DE S. PAULO 10/05/15 Uninspected, Food Containing Irregular Pesticides Circulates in Brazil. 10/05/2015 - 09h19 Documents obtained by Folha show that inspections of pesticide levels in food produced in Brazil, when executed, only reach a small fraction of the products and rejects a third of them. 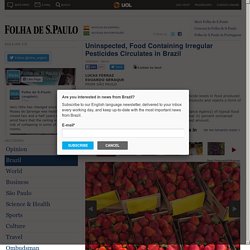 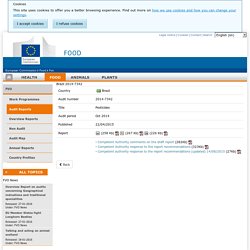 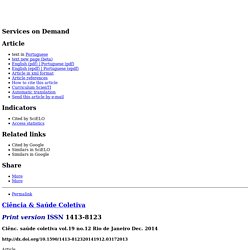 Results from a FAPESP-funded study were published in a Spanish government scientific journal (photo: Embrapa archives) November 19, 2014 By Diego Freire Agência FAPESP – The most recent edition of the Spanish Journal of Agricultural Research, a scientific journal published by the National Institute for Agriculture and Food Research and Technology of Spain’s Ministry of Economy and Competitiveness, offers a mathematical model capable of estimating the amount of gray water required to dilute concentrations of pesticide mixtures in water, thus reducing risks posed to the aquatic environment. 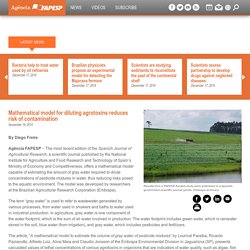 Pesticides Exposure: The Case of Workers on Growing Grapes in San Francisco Valley, Petrolina/Brazil The objective of this work is to analyze the systems of application of pesticides used in harvesting grapes of the sub-medium San Francisco valley, in relation to the risks of occupational contamination. 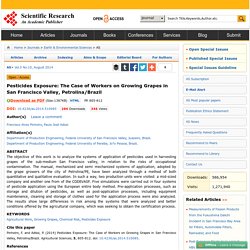 The manual, mechanized and semi mechanized systems of application, adopted by the grape growers of the city of Petrolina/PE, have been analyzed through a method of both quantitative and qualitative evaluation. In such a way, two production units were visited: a mid-sized company and another one from of the CODEVASF. Five simulations were carried out in four systems of pesticide application using the European entire body method. Pre-application processes, such as storage and dilution of pesticides, as well as post-application processes, including equipment maintenance, cleaning and storage of clothes used for the application process were also analyzed. Cite this paper References. Food Analytical Methods October 2014, Volume 7, Issue 9, pp 1834-1839 Determination of Pesticides Residues in Brazilian Grape Juices Using GC-MS-SIM. 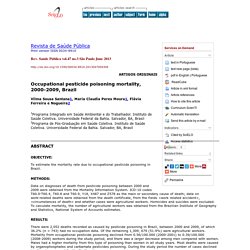 According to the 2006 Agricultural Census, there were 5.17 million agricultural companies, a total of 329.94 million hectares. This is reflected in the large demand for and consumption of chemical products or compounds named pesticides. In 2008, the country became the world's largest consumer of pesticides and was responsible for 86% of Latin America consumption. 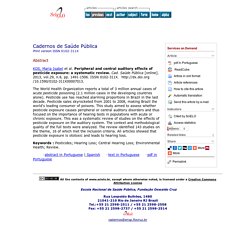 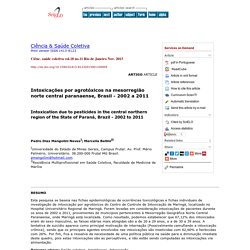 Cad. Saúde Pública, Rio de Janeiro, 30(7):1360-1362, jul, 2014 Pesticide use in Brazil and problems for public health. Business Management Dynamics Vol.2, No.3, Sep 2012, pp.26-31 Social Responsibility in the Use of Pesticides: The Case of Brazilian Agribusiness Fernando. TROPENTAG - SEPT 2012 - Pesticide Contamination in Land Reform Settlements in Brazil: The Case of ‘Cachoeira Bonita’ in Caiaponi. J. Braz. Chem. Soc., 2012. Currently Used Pesticides in Water Matrices in Central-Western Brazil. FAPESP 10/07/13 Pesticides have an impact on the agricultural frontier of Amazon. The "ecological footstep" of the compounds is increasing, according to a study conducted at USP that evaluated the usage standards of large and small producers.

The article was published by the Royal Society July 10, 2013 By Elton Alisson Agência FAPESP – Small producers along the Brazilian Amazon’s agricultural frontier are using pesticides in higher doses and at greater frequencies than are recommended, and in some cases, chemicals are being used that are inappropriate for the infestations that they are intended to control. The large soybean and sugarcane producers in the region follow more of the prevailing agronomical recommendations and even replace compounds that are more toxic to human health with other, less harmful inputs.

Braz. J. Biol. vol.72 no.3 São Carlos Aug. 2012 Influence of agricultural land-use and pesticides on benthic macroinvertebrate a. International Journal of Hygiene and Environmental Health 2013 Jun;216(3):290-4. Pesticide exposure and low birth weight prevale. International Journal of Hygiene and Environmental Health Volume 216, Issue 4, July 2013, Pesticide use and non-Hodgkin's lympho. Abstract Introduction Brazil is one of the major pesticide consumers in the world. The continuous exposure to these substances may be etiologically associated with the development of Non-Hodgkin's Lymphoma (NHL).

Objective Estimate the correlation between the per capita sales of pesticides in 1985 (exposure) and NHL mortality rates between 1996 and 2005 (outcome), by Brazilian micro-regions. Method. GIZMAG 13/06/13 Brazilian researchers develop cheap portable pesticide biosensor. A multidisciplinary Brazilian research team has developed a biosensor to measure pesticide content on food produce, water and soil. The technology is in its development phase, but if developed into a commercial product it could provide a cheap, affordable and portable method to monitor this type of contamination. The biosensor is the result of a research carried out by Izabela Gutierrez de Arruda, a post-graduation student at Instituto de Física de São Carlos (IFSC), in São Paulo State.

Thèse de Doctorat. Crop Protection Volume 35, May 2012 Baseline susceptibility to chlorantraniliprole of Brazilian populations of Plutella xylostel. Talanta Volume 88, 15 January 2012, Multiresidue determination of pesticides in industrial and fresh orange juice by hollow fibe. Abstract A procedure involving hollow fiber microporous membrane liquid–liquid extraction (HF-MMLLE) and detection by liquid chromatography with tandem mass spectrometry was developed and applied. The extraction is based on liquid–liquid microextraction with a polypropylene porous membrane as a solid support for the solvent. On the membrane walls the solvent forms a renewable liquid membrane which improves the trueness of the method and promotes the sample clean-up.

The applicability of this method was evaluated through the simultaneous extraction of 18 pesticides of different classes: polar organophosphates, carbamates, neonicotinoids, amides, pyrimidines, benzimidazoles and triazoles in industrial and fresh orange juice. The parameters affecting the extraction efficiency were optimized by multivariable designs. EMBRAPA - 2011 - Poster : INTEGRATED PRODUCTION SYSTEM OF RICE FOR RISK PREVENTION IN BRAZIL.