PLOS 21/04/17 Soy and fish as features of the Japanese diet and cardiovascular disease risks. Abstract In the World Health Organization (WHO)-coordinated Cardiovascular Disease and Alimentary Comparison Study, isoflavones (I; biomarker for dietary soy) and taurine (T; biomarker for dietary fish) in 24-hour—urine (24U) were inversely related to coronary heart disease (CHD) mortality. High levels of these biomarkers are found in Japanese people, whose CHD mortality is lowest among developed countries. We analyzed the association of these biomarkers with cardiovascular disease risk in the Japanese to know their health effects within one ethnic population. 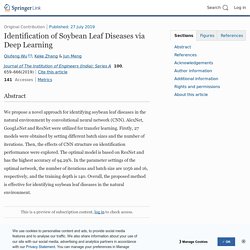 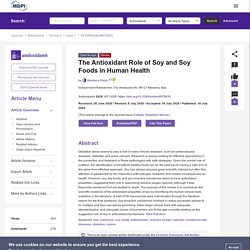 Research is always looking for effective approaches in the prevention and treatment of these pathologies with safe strategies. Given the central role of nutrition, the identification of beneficial healthy foods can be the best key to having a safe and at the same time effective approach. Soy has always aroused great scientific interest but often this attention is galvanized by the interaction with estrogen receptors and related consequences on health. However, soy, soy foods, and soy bioactive substances seem to have antioxidant properties, suggesting their role in quenching reactive oxygen species, although it was frequently mentioned but not studied in depth.

SCIENTIFIC REPORTS 09/09/19 Neonicotinoid seed treatments of soybean provide negligible benefits to US farmers. Soybean seed yield data from 194 randomized and replicated field studies, which were conducted specifically to evaluate the effect of seed treatments on soybean seed yield at sites within each of 14 states from 2006 through 2017, were assembled for this study. 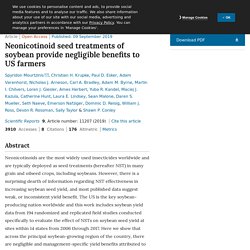 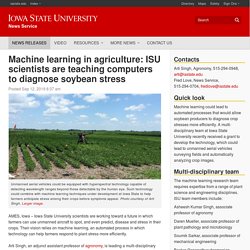 Such technology could combine with machine learning techniques under development at Iowa State to help farmers anticipate stress among their crops before symptoms appear. Photo courtesy of Arti Singh. Larger image. AMES, Iowa – Iowa State University scientists are working toward a future in which farmers can use unmanned aircraft to spot, and even predict, disease and stress in their crops. Their vision relies on machine learning, an automated process in which technology can help farmers respond to plant stress more efficiently. “At its most basic, machine learning is simply training a machine to do something we do,” Singh said. Potential to predict symptoms before they appear. Bragantia vol.78 no.3 Campinas July/Sept. 2019 Effects of nickel fertilization on soybean growth in tropical soils.

PLANT PATHOLOGY 04/08/18 Meta‐analysis of fungicide efficacy on soybean target spot and cost–benefit assessment. Introduction Target spot, caused by Corynespora cassiicola, was first reported on soybean (Glycine max) in the United States in 1945 (Olive et al., 1945), and can now be found in most soybean‐growing countries. 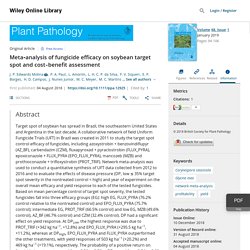 Since its first report in 1976 in Brazil (Almeida et al., 1976), target spot has been considered a disease of limited importance. However, due to the widespread adoption of no‐till cultivation practices, sowing of susceptible cultivars and a decreased sensitivity of the pathogen to commonly used fungicides (Xavier et al., 2013), this disease has now established itself as endemic in Brazilian soybean‐growing regions, Paraguay, Bolivia and northern Argentina (Ploper et al., 2013).

The reddish‐brown leaf lesions, initially observed in the lower to middle part of the canopy, are round to irregular, varying from specks to mature spots of 1 cm or more in diameter (Snow & Berggren, 1989). Every year, technical reports are published summarizing the results from target spot UTFs. Where ). MOLECULAR NUTRITION FOOD RESEARCH - 2018 - Allergy to Peanut, Soybean, and Other Legumes: Recent Advances in Allergen Characterization, Stability to Processing and IgE Cross-Reactivity. 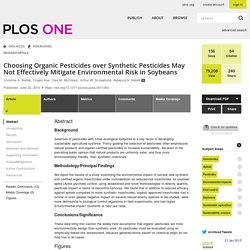 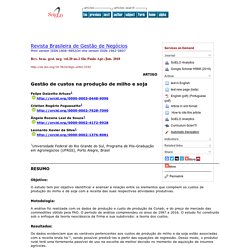 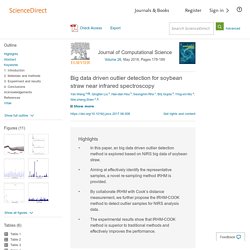 Please enable JavaScript to use all the features on this page. Highlights. J. Agric. Food Chem., 1986, 34 (4), Heavy-metal absorption by soybean on sewage sludge treated soil. Israel Journal of Plant Sciences 20/05/15 Cd accumulation potential as a marker for heavy metal tolerance in soybean. Brazilian Journal of Microbiology Volume 49, Issue 2, April–June 2018, Development and characterization of an innovative synbiotic fermented beverage based on vegetable soybean. D. 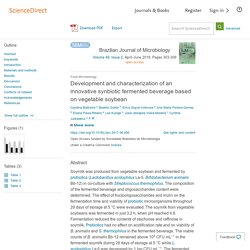 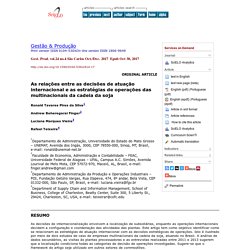 Skip to Main Content Sign In Register Close Advanced Search Recommend to your Library. JOURNAL OF SCIENTIFIC & INDUSTRIAL RESEARCH 28/07/14 HACCP model of kinema, a fermented soybean food. WORLDS TOP EXPORTS 04/11/17 Soya Beans Exports by Country. Soya beans sprouts Global sales from soya beans exports by country amounted to US$52.2 billion in 2016.Overall, the value of soya beans exports were down by an average -2.1% for all exporting countries since 2012 when soya beans shipments were valued at $53.3 billion. Year over year, the value of global soya beans exports increased by 2.3% from 2015 to 2016.Among continents, Latin America excluding Mexico plus the Caribbean accounted for the highest dollar worth of exported soya beans during 2016 with shipments valued at $25.3 billion or 48.4% of globally exported soya beans.

It’s one of the most common questions I get during the back-half of the growing season: “Why didn’t my fungicide work?” This question quickly follows discovery of more disease in a field than was expected given a season-long fungicide program, or subsequent to the last fungicide application. Frustration at times like this is understandable; considerable time, effort and money are invested in each fungicide spray.

This frustration is often focused on the suspicion that the chemical itself failed to measure up to its promise. Angst at the product or at those who sell the product may be a natural reaction. However, identifying the true cause of the breakdown in control is much more important. If your fungicide program stumbled, there are at least 5 other reasons that lead to failure of disease control programs that should be considered before pointing a finger at the fungicide jug: The RATE was wrong or the rate was insufficient for effective management of disease.

The publication covers most of the common issues grain producers face year to year. “It is a great tool to keep in the truck or tractor, especially when scouting throughout the growing season,” said Braden Carpenter, DTC assistant director and co-author of the field guide. “Not only is it packed with the latest information on common field issues, but it also provides many photos that can help growers accurately diagnose problems they see in their fields and furthermore feel confident in what steps to take in the management of those problems.” Rev. Ceres vol.64 no.3 Viçosa May./June 2017 Joint use of fungicides, insecticides and inoculants in the treatment of soybean seeds. International Journal of Environment, Agriculture a nd Biotechnology (IJEAB) - NOV 2016 - Field Evaluation of Different Modules against Insect Pest and Diseases of Soybean.

Références universitaires. GENOK - JANV 2012 - Soybean Production in the Southern Cone of the Americas: Update on Land and Pesticide Use. INQUIRY (UNIVERSITE DU MINNESOTA) 17/07/15 Precision farming targets major threat to soybean crops. Over the last 15 years, farmers across the U.S. have faced a daunting challenge. The soybean aphid, an invasive species first reported in the U.S. in 2000, has flourished on farms. These tiny yellow insects can destroy up to 40 percent of a soybean field when left unchecked. This is bad news for Minnesota, where soybeans are the top export crop and farmers produce 3 billion bushels of beans a year, according to the Minnesota Soybean Research and Promotion Council.