CHEMICAL & ENGINEERING NEWS 31/03/21 Groups challenge EPA approval of streptomycin use on citrus. A coalition of environmental and farmworker groups is suing the US Environmental Protection Agency for allowing use of the medically important antibiotic streptomycin on citrus. 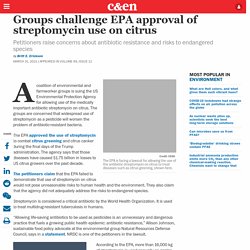 The groups are concerned that widespread use of streptomycin as a pesticide will worsen the problem of antibiotic-resistant bacteria. The EPA approved the use of streptomycin to combat citrus greening and citrus canker during the final days of the Trump administration. The agency says that those diseases have caused $1.75 billion in losses to US citrus growers over the past decade. The petitioners claim that the EPA failed to demonstrate that use of streptomycin on citrus would not pose unreasonable risks to human health and the environment. 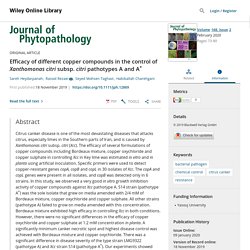 The efficacy of several formulations of copper compounds including Bordeaux mixture, copper oxychloride and copper sulphate in controlling Xcc in Key lime was estimated in vitro and in planta using artificial inoculation. Specific primers were used to detect copper‐resistant genes copA, copB and copL in 30 isolates of Xcc. The copA and copL genes were present in all isolates, and copB was detected only in 6 strains. In this study, we observed a very good in vitro growth inhibition activity of copper compounds against Xcc pathotype A. S14 strain (pathotype A*) was the sole isolate that grew on media amended with 2/4 mM of Bordeaux mixture, copper oxychloride and copper sulphate. 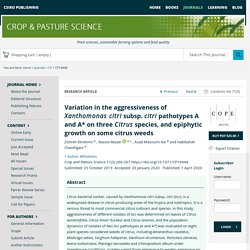 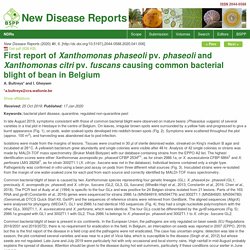 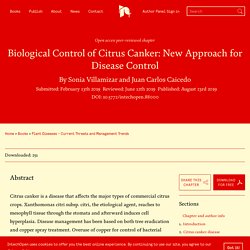 Introduction The steady increase in global overpopulation has forced the agricultural producer to introduce environmentally aggressive practices (e.g., undiscriminating use of pesticides and chemical fertilizers), in order to respond to the rising request of cultivated crops for food. The growing breach between supply and request and the negative impact on the environment have stimulated researchers to develop alternative strategies, pursuing to promote a sustainable agriculture. The interactions between plants and their associated microorganisms have generated a huge interest. MOLECULAR PLANT PATHOLOGY - 2018 - Recent advances in the understanding of Xanthomonas citri ssp. citri pathogenesis and citrus canker disease management. ENVIRONMENTAL MICROBIOLOGY 28/02/18 Xanthomonas citri T6SS mediates resistance to Dictyostelium predation and is regulated by an ECF σ factor and cognate Ser/Thr kinase.

Plant‐associated bacteria of the genus Xanthomonas cause disease in a wide range of economically important crops. 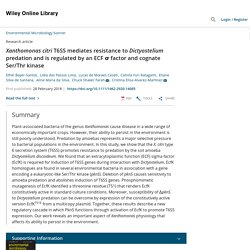 However, their ability to persist in the environment is still poorly understood. Predation by amoebas represents a major selective pressure to bacterial populations in the environment. In this study, we show that the X. citri type 6 secretion system (T6SS) promotes resistance to predation by the soil amoeba Dictyostelium discoideum. We found that an extracytoplasmic function (ECF) sigma factor (EcfK) is required for induction of T6SS genes during interaction with Dictyostelium. EcfK homologues are found in several environmental bacteria in association with a gene encoding a eukaryotic‐like Ser/Thr kinase (pknS). PHYS_ORG 25/05/18 Researchers discover mechanism behind citrus canker bacteria's defense system for predators. Xanthomonas citri, the bacterium that causes citrus canker, a disease responsible for major damage to lemon and orange groves in worldwide scale, has a veritable arsenal of weapons to overcome constant competition with other bacterial species and ward off natural predators such as amoebae. 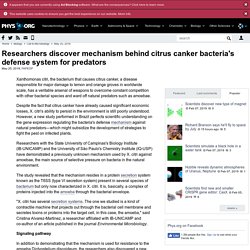 Despite the fact that citrus canker have already caused significant economic losses, X. citri's ability to persist in the environment is still poorly understood. However, a new study performed in Brazil perfects scientific understanding on the gene expression regulating the bacteria's defense mechanism against natural predators—which might subsidize the development of strategies to fight the pest on infected plants.

The study revealed that the mechanism resides in a protein secretion system known as the T6SS (type VI secretion system) present in several species of bacterium but only now characterized in X. citri. LETTERS IN APPLIED MICROBIOLOGY 31/03/18 Terrestrial and marine Antarctic fungi extracts active against Xanthomonas citri subsp. citri. This study aims to obtain secondary metabolites extracts from filamentous fungi isolated from soil and marine sediments from Antarctica and assess its potential antibacterial activity on Xanthomonas citri subsp. citri, the agent of citrus canker. 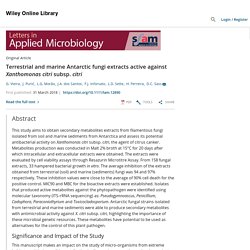 Metabolites production was conducted in Malt 2% broth at 15°C for 20 days after which intracellular and extracellular extracts were obtained. The extracts were evaluated by cell viability assays through Resazurin Microtitre Assay. From 158 fungal extracts, 33 hampered bacterial growth in vitro. The average inhibition of the extracts obtained from terrestrial (soil) and marine (sediments) fungi was 94 and 97% respectively. These inhibition values were close to the average of 90% cell death for the positive control. Significance and Impact of the Study. PHYS_ORG 14/06/18 Antarctic fungi found to be effective against citrus canker. A research team at the São Paulo State University's Bioscience Institute (IB-UNESP) in Rio Claro, Brazil, has identified 29 fungi with proven action against Xanthomonas citri, a bacterium responsible for citrus canker, an endemic disease in all citrus-producing countries. 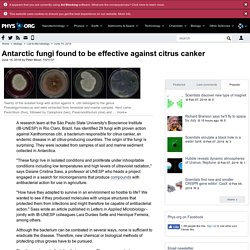 The origin of the fungi is surprising. They were isolated from samples of soil and marine sediment collected in Antarctica. "These fungi live in isolated conditions and proliferate under inhospitable conditions including low temperatures and high levels of ultraviolet radiation," says Daiane Cristina Sass, a professor at UNESP who heads a project engaged in a search for microorganisms that produce compounds with antibacterial action for use in agriculture. "How have they adapted to survive in an environment so hostile to life? We wanted to see if they produced molecules with unique structures that protected them from infections and might therefore be capable of antibacterial action. 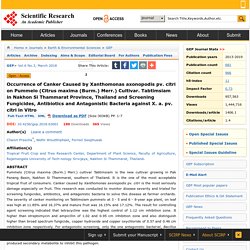 Introduction Thailand is the land of plenty of tropical fruit crop. The most popular is rambutan, pummelo, mangosteen and durian. GOVERNMENT OF WESTERN AUSTRALIA - 2018 - Preventing the spread of citrus canker in Western Australia. New Phytol. 2017 May; 214(3): Risk‐based management of invading plant disease. Plant Biotechnol J. 2017 December; 15(12): Engineering canker‐resistant plants through CRISPR/Cas9‐targeted editing of the susceptibility gene CsLOB1 promoter in citrus.

In a previous opinion in the year 2014, the EFSA PLH Panel concluded that commercial fresh citrus fruit is generally pathway and that no commercially important Citrus species or variety can be considered as immune to citrus bacterial canker. In the current assessment, the EFSA PLH Panel analysed the two scientific papers provided by the Japanese authorities, as well as 16 additional papers identified through a systematic literature review. 1 Introduction Koizumi M, 1979. 2 Data and methodologies. DG SANCO 03/05/17 Nouveaux rapports OAV : IT Italy - evaluate the situation and control for Thousand Canker disease. Cookies This site uses cookies to offer you a better browsing experience. Find out more on how we use cookies and how you can change your settings. European Commission Accessibility tools Service tools. PARLEMENT EUROPEEN - Réponse à question E-004975-16 Proposed changes to the annexes to Directive 2000/29/EC on plant health ( citrus canker and citrus black spot)

The Commission has proposed, through an implementing regulation, changes to the annexes to Directive 2000/29/EC on plant health. These changes will considerably weaken checks on citrus imports. Among other things, citrus fruits intended for industrial processing will be subject to fewer checks than fresh produce from countries affected by citrus canker and citrus black spot. This measure has provoked serious concern in the sector, above all given the large number of cases of black spot disease being detected in citrus fruit from third countries, and owing to the serious damage that the sector could suffer if the disease were to spread to European plantations. It also seems surprising, bearing in mind the agreement that was recently reached on the new plant health regulation, aimed at stepping up the fight against the spread of diseases from third countries.

Can the Commission explain why it plans to reduce checks? 2BLADES FOUNDATION - OCT 2016 - Citrus Canker - Multipronged approach to combat citrus disease. "We most definitely need a non-copper control. Copper builds up in the soil and makes a very toxic growing environment that lasts for decades. I don't think I can over-stress the problem that canker is causing in Florida groves. Although it's still very early in the season, to date I have had more fruit drop from canker than I have from HLB [citrus greening]. " —Bobby Barben, grower The challenge. PARLEMENT EUROPEEN - Réponse à question E-004975-16 Proposed changes to the annexes to Directive 2000/29/EC on plant health ( citrus canker and citrus black spot)

Several researchers have shown that CTV mild isolates that are selected in the same region where they are used are superior to isolates obtained from other areas. Keywords: SSCP, RFLP, cross-protection, citrus Introduction In the past 90 years, citrus tristeza has been considered one of the most important citrus diseases worldwide (Souza and Müller, 2006). GROWING PRODUCE 12/07/13 Citrus Canker Detected In Louisiana - Disease discovery is first U.S. find outside of Florida. USDA’s Animal and Plant Health Inspection Service (APHIS) has confirmed the identification of Xanthomonas axonopodis pv. citri, the bacterial causal agent of citrus canker, from citrus leaf samples collected from two trees in City Park, New Orleans, Orleans Parish, Louisiana.