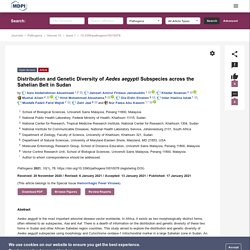 Introduction Aedes aegypti (Ae. aegypti), which is commonly known as the yellow fever mosquito, is recognized for the transmission of the most significant arboviral diseases, including dengue, chikungunya, and zika viruses [1,2] It is estimated that 70% (831 million) of the African population is vulnerable to arboviral disease infections [3]. This species is a tropical and subtropical mosquito with distribution throughout the globe but native to Sub-Saharan and African Sahelian regions, including Senegal, Cameroon, Kenya, Nigeria, Morocco, Western Sahara, Algeria, Tunisia, Egypt, and Sudan [4,5]. Known as the domestic mosquito, Ae. aegypti feeds on humans (anthropophilic) during the daytime hours. 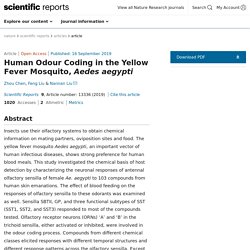 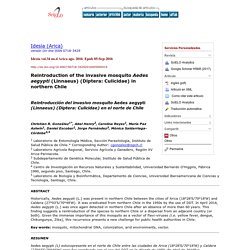 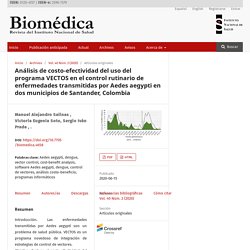 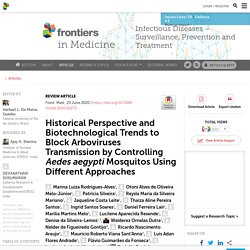 According to the Pan American Health Organization (PAHO) vector-borne diseases are considered public health problems and have a major social and economic impact causing high morbidity and mortality, especially in developing countries (2). Approximately 75% of the Latin American population lives in cities, which makes the most urbanized continent in the world (3). Trop. Med. Infect. Dis. 27/05/20 Monitoring Insecticide Susceptibility in Aedes Aegypti Populations from the Two Biggest Cities, Ouagadougou and Bobo-Dioulasso, in Burkina Faso: Implication of Metabolic Resistance. 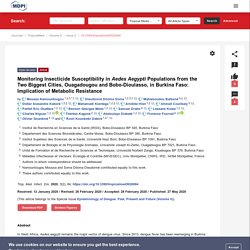 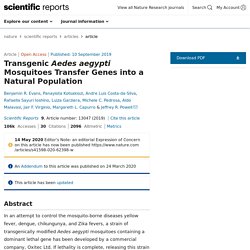 PARASITES & VECTORS 24/09/19 Serine hydroxymethyltransferase controls blood-meal digestion in the midgut of Aedes aegypti mosquitoes. Sequence characteristics and expression patterns of A. aegypti serine hydroxymethyltransferase In the latest genome assembly for A. aegypti (AaegL5), SHMT is located on Chromosome 1:90, 394, 257-90, 421, 721, and has four alternative splicing forms (transcripts), namely AAEL002510-RA, AAEL002510-RB, AAEL002510-RC and AAEL002510-RD, but encodes two isoforms of protein with 573 aa and 475 aa (Fig. 1a–d). 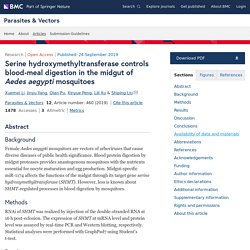 The short protein translated from AAEL002510-RB lacks 99 amino acids at the N-end and has seven amino acids different from the longer one encoded by the other three transcripts. The two kinds of protein-coding regions (CDS) were cloned into prokaryotic expression vector and expressed in bacteria (Fig. 1e–g), followed by purifying the proteins to prepare antibodies. Gene structures, isoforms and prokaryotic expression patterns of A. aeSHMT. JOURNAL OF VECTOR ECOLOGY 15/11/19 A new approach to improve acoustic trapping effectiveness for Aedes aegypti (Diptera: Culicidae) Worldwide, Aedes aegypti mosquitoes are the main vectors of dengue, chikungunya, and Zika viruses (Mayer et al. 2017). 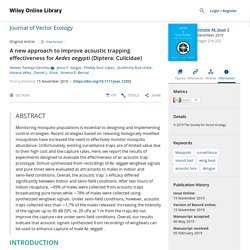 As there are no effective treatments for these mosquito‐borne diseases, prevention of their transmission depends mainly on controlling vector populations. Traditional control strategies, however, exhibit serious difficulties (WHO 2014). As a consequence, hindering reproduction has been one of the main reasons for developing new biologically‐based strategies like radiated, transgenic or symbiont‐based approaches (Bourtzis et al. 2016). 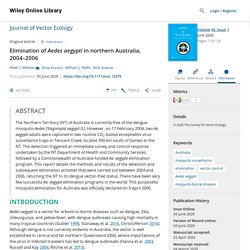 Although dengue is not currently endemic in Australia, the vector is well established in central and far northern Queensland (Qld), where importations of the virus in infected travelers has led to dengue outbreaks (Hanna et al. 2003, Russell and Kay 2004, Ritchie et al. 2013). Aedes aegypti was also widely established in the Northern Territory (NT) until the 1940s, where it was recorded from Darwin, the principal city on the north coast, to Newcastle Waters in the south, before it disappeared between 1956 and 1974 (Whelan 1981).

Its disappearance may be due to various factors, including the widespread reticulation of water during and soon after World War II and the coincidental removal of rainwater tanks (O'Gower 1956, O'Gower 1958, Lee et al. 1987). JOURNAL OF MEDICAL ENTOMOLOGY 11/02/20 Sugar Feeding Patterns for Aedes aegypti and Culex quinquefasciatus (Diptera: Culicidae) Mosquitoes in South Texas. We use cookies to enhance your experience on our website. By clicking 'continue' or by continuing to use our website, you are agreeing to our use of cookies. You can change your cookie settings at any time. JOURNAL OF MEDICAL ENTOMOLOGY 09/12/19 Geographical Distribution of Aedes aegypti aegypti and Aedes aegypti formosus (Diptera: Culicidae) in Kenya and Environmental Factors Related to Their Relative Abundance.

INSECTS 06/11/18 Effects of the Environmental Temperature on Aedes aegypti and Aedes albopictus Mosquitoes: A Review. INSECTS 01/08/19 Aedes aegypti Males as Vehicles for Insecticide Delivery. Aedes aegypti continues to spread globally and remains a challenge to control, in part due to its ‘cryptic behavior’ in that it often deposits eggs (oviposits) in larval habitats that are difficult to find and treat using traditional methods. Auto-dissemination strategies target these cryptic breeding sites by employing mosquitoes to deliver lethal doses of insecticide. This report describes the initial field trials of an application known as Autodissemination Augmented by Males (ADAM), utilizing A. aegypti males dusted with pyriproxyfen (PPF). Findings presented here are drawn from both caged and field trial studies. Together, these trials examined for the ability of A. aegypti males to disseminate PPF and to impact field populations.

The material is used in microcapsules for storage and controlled release of active compounds to kill larvae of Aedes aegypti, the mosquito that transmits dengue, zika, yellow fever and chikungunya. A patent application has been filed via UNICAMP’s innovation agency (Inova). Emerg Microbes Infect. 2019;8(1):1636-1641. Potential of Aedes albopictus and Aedes aegypti (Diptera: Culicidae) to transmit yellow fever virus in urban areas in Central Africa. Background Yellow fever (YF) is a mosquito borne viral disease endemic in South America and Sub-Saharan African countries. Clinical signs vary from a fever with aches and pains to severe liver disease with bleeding and yellowing skin (jaundice), for which there is no specific treatment. Despite the availability of an effective vaccine, which can offer a lifelong immunity, numerous cases of YF are still being reported. Indeed, a modelling study based on African data sources estimated that the burden of YF during 2013 was 84 000–170 000 severe cases and 29 000–60 000 deaths [1Garske T, Van Kerkhove MD, Yactayo S, et al.

ECOLOGY AND EVOLUTION 26/04/19 Wolbachia pipientis occurs in Aedes aegypti populations in New Mexico and Florida, USA. Wolbachia are obligate intracellular bacteria found in a wide range of terrestrial arthropods and nematodes (Werren, Baldo, & Clark, 2008). The bacterium was discovered in the reproductive tissues (testes and ovaries) of the mosquito Culex pipiens L. by Hertig and Wolbach in 1924 (Hertig & Wolbach, 1924) and was formally described as Wolbachia pipientis by Hertig in 1936 (Hertig, 1936). About 60%–70% of all insect species harbor Wolbachia , including some mosquito species (Hilgenboecker, Hammerstein, Schlattmann, Telschow, & Werren, 2008). BIORXIV 25/02/20 The need to harmonize insecticide resistance testing: methodology, intensity concentrations and molecular mechanisms evaluated in Aedes aegypti populations in Central America and Hispaniola.

BIORXIV 02/06/20 Competition and growth among Aedes aegypti larvae: effects of distributing food inputs over time. NATURE 01/05/20 Accelerating invasion potential of disease vector Aedes aegypti under climate change. Study species Aedes aegypti is the primary vector for several important viruses of global health concern, including dengue, zika, yellow fever and chikungunya. Previous studies have suggested that climate change may have already influenced or will influence the distribution of suitable environments in which Ae. aegypti can thrive, resulting in changes in disease risk50,66. Beyond its health relevance, Ae. aegypti is an ideal species to use for exploring the utility of phenology models for human disease vectors because appropriate data for model parameterisation and validation are broadly available in the literature.

This mosquito vector develops from the egg through a number of larval instars before emerging into adults that are only then able to transmit pathogens as the females seek blood meals to support egg development67. Model overview. Virus Evol. 2020 Apr 29;6(1) Novel genome sequences of cell-fusing agent virus allow comparison of virus phylogeny with the genetic structure of Aedes aegypti populations. We use cookies to enhance your experience on our website. By clicking 'continue' or by continuing to use our website, you are agreeing to our use of cookies.

You can change your cookie settings at any time. Parasites & Vectors 22/04/20 Distribution and pyrethroid resistance status of Aedes aegypti and Aedes albopictus populations and possible phylogenetic reasons for the recent invasion of Aedes aegypti in Nepal. PLoS One. 2020 Apr 28; Genetic analysis of Aedes aegypti captured at two international airports serving to the Greater Tokyo Area during 2012-2015.

Worldwide vector control is largely based on insecticide treatments but, unfortunately, vector control programs are facing operational challenges due to mosquitoes becoming resistant to commonly used insecticides. In Southeast Asia, resistance of Ae. aegypti to chemical insecticides has been documented in several countries but no data regarding insecticide resistance has been reported in Laos. To fill this gap, we assessed the insecticide resistance of 11 Ae. aegypti populations to larvicides and adulticides used in public health operations in the country. JOURNAL OF MEDICAL ENTOMOLOGY 09/12/19 Geographical Distribution of Aedes aegypti aegypti and Aedes aegypti formosus (Diptera: Culicidae) in Kenya and Environmental Factors Related to Their Relative Abundance. We use cookies to enhance your experience on our website. By clicking 'continue' or by continuing to use our website, you are agreeing to our use of cookies. You can change your cookie settings at any time.

We use cookies to enhance your experience on our website.By continuing to use our website, you are agreeing to our use of cookies. You can change your cookie settings at any time. <a href=" Find out more</a> Skip to Main Content Sign In Register Close Advanced Search Article Navigation Article Contents. PARASITES & VECTORS 27/11/19 The expanding pattern of Aedes aegypti in southern Yunnan, China: insights from microsatellite and mitochondrial DNA markers. Sylvatic dengue virus type 4 in Aedes aegypti and Aedes albopictus mosquitoes in an urban setting in Peninsular Malaysia. Emerg Microbes Infect. 2019;8(1):1636-1641. Potential of Aedes albopictus and Aedes aegypti (Diptera: Culicidae) to transmit yellow fever virus in urban areas in Central Africa. PARASITES & VECTORS 24/09/19 Serine hydroxymethyltransferase controls blood-meal digestion in the midgut of Aedes aegypti mosquitoes. PLOS 16/09/19 The genetic structure of Aedes aegypti populations is driven by boat traffic in the Peruvian Amazon.