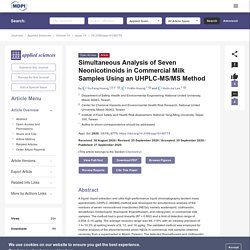 The method had a good linearity (R2 > 0.992) and a limit of detection range of 0.004–0.15 μg/kg. The average recovery range was 89–119% with an intraday precision of 1.4–10.3% at spiking levels of 8, 12, and 16 μg/kg. The validated method was employed for routine analysis of the aforementioned seven NEOs in commercial milk samples obtained randomly from a supermarket in Miaoli (Taiwan). The detected thiamethoxam and clothianidin levels were 3.4 and 80 μg/kg, respectively. View Full-Text ►▼ Show Figures Figure 1. PLOS 01/07/19 LC-ESI/MS/MS analysis of neonicotinoids in urine of very low birth weight infants at birth. Abstract Objectives Neonicotinoid insecticides are widely used systemic pesticides with nicotinic acetylcholine receptor agonist activity that are a concern as environmental pollutants. 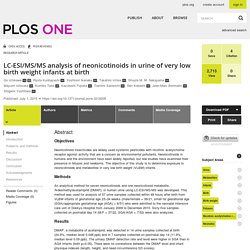 Neonicotinoids in humans and the environment have been widely reported, but few studies have examined their presence in fetuses and newborns. SCIENTIFIC REPORTS 31/05/19 Extremely low neonicotinoid doses alter navigation of pest insects along pheromone plumes. Insects and insecticide application Insects from insecticide-susceptible colonies were reared on artificial diet at 25 ± 1 °C under a 16:8 h light:dark photoregime. 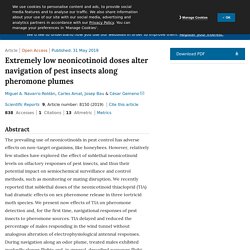 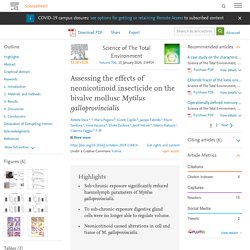 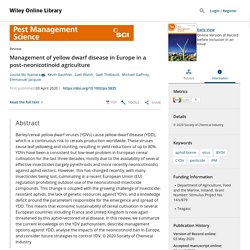 These viruses cause leaf yellowing and stunting, resulting in yield reductions of up to 80%. YDVs have been a consistent but low‐level problem in European cereal cultivation for the last three decades, mostly due to the availability of several effective insecticides (largely pyrethroids and more recently neonicotinoids) against aphid vectors. However, this has changed recently, with many insecticides being lost, culminating in a recent European Union (EU) regulation prohibiting outdoor use of the neonicotinoid‐insecticide compounds. NRDC 04/02/19 Neonic Pesticide May Become More Toxic in Tap Water. Yet again, our government scientists—the oft neglected but so important brain trust of our Nation—bring the public some very important new data. 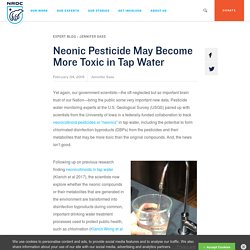 Pesticide water monitoring experts at the U.S. Geological Survey (USGS) paired up with scientists from the University of Iowa in a federally-funded collaboration to track neonicotinoid pesticides or “neonics” in tap water, including the potential to form chlorinated disinfection byproducts (DBPs) from the pesticides and their metabolites that may be more toxic than the original compounds. And, the news isn’t good.

Following up on previous research finding neonicotinoids in tap water (Klarich et al 2017), the scientists now explore whether the neonic compounds or their metabolites that are generated in the environment are transformed into disinfection byproducts during common, important drinking water treatment processes used to protect public health, such as chlorination (Klarich Wong et al 2019). ENVIRONMENTAL TOXICOLOGY AND CHEMISTRY 10/06/19 Assessment of Sublethal Effects of Neonicotinoid Insecticides on the Life‐History Traits of 2 Frog Species. Globally, neonicotinoid insecticides are one of the most widely used classes of insecticides (Jeschke et al. 2011; Goulson 2013; Douglas and Tooker 2015). 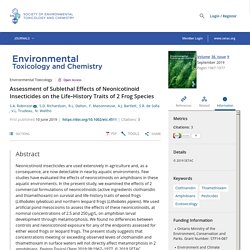 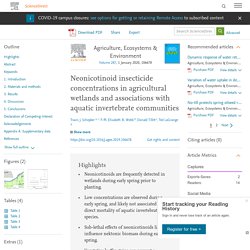 Anderson, C. Dubetz, V.P. PalaceNeonicotinoids in the Canadian aquatic environment: a literature review on current use products with a focus on fate, exposure, and biological effects Anderson et al., 2013 T.A. Beketov and Liess, 2008. JOURNAL OF APPLIED ECOLOGY 02/07/19 Environmental levels of neonicotinoids reduce prey consumption, mobility and emergence of the damselfly Ischnura elegans. Pesticides have been indicated as a potential pollution threat to freshwater ecosystems (Beketov, Kefford, Schäfer, & Liess, 2013; Tilman et al., 2001), one of the most endangered ecosystems in the world (Dudgeon et al., 2006). 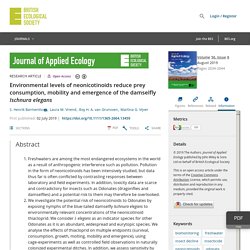 Currently, neonicotinoid insecticides receive much of the attention as their usage have increased sharply over the past two decades (Simon‐Delso et al., 2015) and they are now the most commonly used insecticides globally (Jeschke, Nauen, Schindler, & Elbert, 2011). Neonicotinoids combat insect pest species by binding to the nicotinic acetylcholine receptors (nAChR), which induces continuous excitation of the neuronal membranes leading to paralysis (Simon‐Delso et al., 2015). Environment International Volume 126, May 2019, Dietary risk of neonicotinoid insecticides through fruit and vegetable consumption in school-age children.

1. Introduction Children are frequently exposed to pesticides, such as organochlorine, organophosphates, or pyrethroids insecticides through dietary ingestion, inhalation, or dermal exposure, due to the increase use of pesticides in agriculture and household environment (Lu et al., 2006; Bouchard et al., 2011; Sagiv et al., 2012). Dietary intake is perhaps the most important pathway for young children due to the consumption of vegetables and fruits that are contaminated with pesticides (Lu et al., 2006; Lu et al., 2018; Riederer et al., 2011). Children are known to be vulnerable to environmental chemicals because of their developing detoxifying capabilities, and growing epidemiological evidence indicates that children's exposure to pesticides is closely related to the neuro-developmental deficits (Jacobson et al., 2015; Hicks et al., 2017). Science of The Total Environment Volume 660, 10 April 2019, A large-scale survey of house sparrows feathers reveals ubiquitous presence of neonicotinoids in farmlands.

PHYS_ORG 26/06/18 Why it's time to curb widespread use of neonicotinoid pesticides. Planting season for corn and soybeans across the U.S. corn belt is drawing to a close. 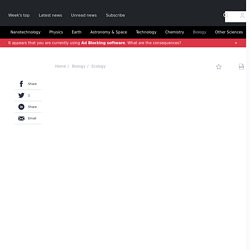 As they plant, farmers are participating in what is likely to be one of the largest deployments of insecticides in United States history. Almost every field corn seed planted this year in the United States – approximately 90 million acres' worth – will be coated with neonicotinoid insecticides, the most widely used class of insecticides in the world. The same is true for seeds in about half of U.S. soybeans – roughly 45 million acres and nearly all cotton – about 14 million acres. In total, by my estimate, these insecticides will be used across at least 150 million acres of cropland, an area about the size the Texas. Neonicotinoids are very good at killing insects. NATURE 09/11/18 Mammalian Susceptibility to a Neonicotinoid Insecticide after Fetal and Early Postnatal Exposure. JOURNAL OF ENVIRONMENTAL SCIENCE AND HEALTH 29/12/17 Leaching and sorption of neonicotinoid insecticides and fungicides from seed coatings.

Please enable JavaScript to use all the features on this page. Environmental Health Perspectives - NOV 2018 - Promotional Consideration: A Potential Mechanistic Link between Neonicotinoid Insecticides and Hormone-Dependent Breast Cancer. PEST MANAGEMENT SCIENCE 13/10/17 The impact of restrictions on neonicotinoid and fipronil insecticides on pest management in maize, oilseed rape and sunflower in eight European Union regions. Environ Sci Technol. 2018 Feb 2. Insecticide Resistance Signals Negative Consequences of Widespread Neonicotinoid Use on Multiple Field Crops in the U.S. Cotton Belt. Functioning of the SAGIR network In France, the surveillance of pesticide unexpected acute effects on free-ranging wild birds and mammals is performed through the national network of epidemiological surveillance “SAGIR”. SAGIR is a generalist incident-based surveillance network for epidemiological vigilance towards wildlife disease dealing with early detection and early warning.

Open access peer-reviewed Edited Volume From Specific Toxic Agents to Novel Rapid and Simplified Techniques for Analysis This book, which is the result of contributions from a team of international authors, presents a collection of materials that can be categorized into two groups. The first group of papers deals with clinical toxicology topics including poisoning by anticoagulant rodenticides, food toxins, carbon monoxide, the toxicity of beta-lactam antibiotics, acute neonicotinoid poisoning, occupational risk fac...

This book, which is the result of contributions from a team of international authors, presents a collection of materials that can be categorized into two groups. NEWCASTLE UNIVERSITY - 2015 - Examining pyrethroids, carbamates and neonicotenoids in fish, water and sediments from the Indus River for potential health risks. NATURE 16/08/16 Impacts of neonicotinoid use on long-term population changes in wild bees in England. Wild bee distributional data and foraging preferences There are ∼250 species of native bees (Order Hymenoptera) known to occur in England, comprising solitary bees (for example, some Apidae, Andrenidae, Megachilidae and Halictidae), 24 species of bumblebee (Apidae: Bombus spp.) and the domesticated honeybee (A. mellifera).

Approximately 20% of these species are known to act as pollinators of oilseed rape and so occur within arable farmland37,39,40. To assess distributional changes in these wild bee species we analysed long-term occurrence records from 1994–2011. These records were collected and verified by the Bees, Ants and Wasps Recording Society (BWARS: and represent a largely volunteer-collected, national-scale distributional database that is globally unique in coverage and detail.

We used only bee distributional records from England to match available data on insecticide use and oilseed rape cropping patterns. Wild bee distributional foraging preferences for oilseed rape. Chemosphere Volume 169, February 2017 Factors influencing the occurrence and distribution of neonicotinoid insecticides in surface waters of southern Ontario, Canada. Open Access. Néonicotinoïdes dans le fil ORGANICVIEW sur YOUTUBE. All over the world, bees and other pollinators are dying from systemic pesticides called neonicotinoids. In this video, watch as a bee trembles as it struggles to hang on to a leaf. Then multiply this image by millions and think about what beekeepers are experiencing as they watch their bees die from pesticide exposure.©2014 The Organic View Radio Show. TheOrganicView via YOUTUBE 22/12/16 Chicago To Ban Neonicotinoids & EPA’s Glyphosate Discussion. TheOrganicView via YOUTUBE 06/01/17 Will Neonicotinoids Be Banned in 2017?

PLOS 17/12/14 Unexpected Effects of Low Doses of a Neonicotinoid Insecticide on Behavioral Responses to Sex Pheromone in a Pest Insect. Abstract In moths, which include many agricultural pest species, males are attracted by female-emitted sex pheromones. Humboldt Forum for Food and Agriculture - JANV 2013 - The value of Neonicotinoid seed treatment in the European Union. EUROPEAN ACADEMIES SCIENCES ADVISORY COUNCIL (EASAC) - AVRIL 2015 - Ecosystem services, agriculture and neonicotinoids. CENTER FOR FOOD SAFETY - JUNE 2015 - HIDDEN COSTS OF TOXIC SEED COATINGS Insecticide Use on the Rise. Journal of Entomology and Zoology Studies 2015; 3 (2): 01-06 Reproductive effects of a neonicotinoid insecticide (Imidacloprid) in the German Cockroaches Blattella germanica L. (Dictyoptera, Blattellidae)

UMassAmherst 05/06/14 Grub Control in Lawns: Neonicotinoids and Bees. A disturbing trend observed the last several years is the rapid and dramatic decline of honeybee populations. While most enjoy honey and are familiar with beekeeping as a hobby, it may be less well known that healthy honeybees along with various native bee species are an essential part of agricultural production. Bees are responsible for the pollination of a wide range of agricultural crops each growing season; crops valued in the billions of dollars that are critical to the stability of our food system. Public and private interests are currently scrambling to identify the mechanics of this pressing issue, commonly referred to as honeybee decline or colony collapse disorder (CCD). It is important to note that commercial honeybee colonies are affected along with wild, native pollinator populations. Concerning the role of pesticides, neonicotionoid insecticides such as imidacloprid, clothianidin and thiamethoxam have been implicated as a potential contributing factor to honeybee decline.

ONTARIO BEE - 2014 - Bees under stress: sublethal doses of a neonicotinoid pesticide and pathogens interact to elevate honey bee mortality across the life cycle. PLOS 01/08/14 Impact of Chronic Neonicotinoid Exposure on Honeybee Colony Performance and Queen Supersedure. Background Honeybees provide economically and ecologically vital pollination services to crops and wild plants. During the last decade elevated colony losses have been documented in Europe and North America. Despite growing consensus on the involvement of multiple causal factors, the underlying interactions impacting on honeybee health and colony failure are not fully resolved. Parasites and pathogens are among the main candidates, but sublethal exposure to widespread agricultural pesticides may also affect bees. PLOS 26/03/14 Widespread Use and Frequent Detection of Neonicotinoid Insecticides in Wetlands of Canada's Prairie Pothole Region.

The potential impact to ecologically significant wetlands in this dominantly agro-environment has largely been overlooked while the distribution of use, incidence and level of contamination remains unreported. Journal of Pesticide Science (Impact Factor: 0.69). 01/2013; 38(1):44-47. Comparison of acute toxicity of two neonicotinoid insecticides, imidacloprid and clothianidin, to five cladoceran species.

PLOS 12/11/13 Qualitative Profiling and Quantification of Neonicotinoid Metabolites in Human Urine by Liquid Chromatography Coup. JOURNAL OF APPLIED ECOLOGY - 2013 - An overview of the environmental risks posed by neonicotinoid insecticides. Crop Protection 54 (2013) 84e91 Considerations for the use of neonicotinoid pesticides in management of Bactericera cockerelli ( THE GREENS - EUROPEAN FREE ALLIANCE 12/03/13 Syngenta, Lies & Pesticides - The 10 Syngenta Lies on bees and neonicotinoids. HFFA - 2013 - The value of neonicotinoid seed treatment in the European Union - A socio-economic, technological and environmenta.