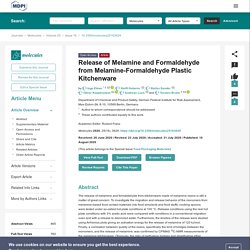 To investigate the migration and release behavior of the monomers from melamine-based food contact materials into food simulants and food stuffs, cooking spoons were tested under so-called hot plate conditions at 100 °C. Release conditions using the real hot plate conditions with 3% acetic acid were compared with conditions in a conventional migration oven and with a release to deionized water.

Furthermore, the kinetics of the release were studied using Arrhenius plots giving an activation energy for the release of melamine of 120 kJ/mol. PEERJ 07/05/20 Evaluation of a novel syndromic surveillance system for the detection of the 2007 melamine-related nephrotoxicosis foodborne outbreak in dogs and cats in the United States. ENVIRON. SCI. TECHNOL. 10/06/19 Occurrence of Melamine and Its Derivatives in Breast Milk from the United States and Its Implications for Exposure in Infants.

VETERINARY PATHOLOGY JANV 2010 Au sommaire: Food and Pharmaceuticals: Lessons Learned From Global Contaminations With Melamine/Cyanuric Acid and Diethylene Glycol. Do not look where you fell, but where you slipped. 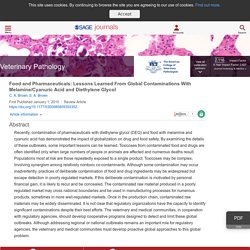 —African proverb Within the last 10 years, there has been increased globalization of drug manufacturing as well as outsourcing of production of constituent drug and food ingredients.1 Although final product manufacturing may be performed under highly regulated guidelines, the raw materials entering the regulated production process may have originated in countries under poorly regulated conditions. MICHIGAN STATE UNIVERSITY 18/01/17 The Economics of a Food Fraud Incident – Case Studies and Examples, Including Melamine in Wheat Gluten.

We all know Food Fraud occurs for economic gain, but it is more complex than just “profit margin” or “commodity price swings.” 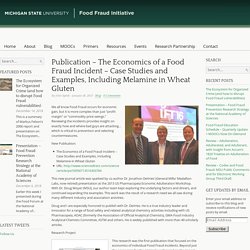 Reviewing the incidents provides insight on exactly how and where bad guys are attacking… which is critical to prevention and selecting countermeasures. New Publication: This new journal article was sparked by co-author Dr. Jonathon DeVries’ (General Mills/ Medallion Labs, now retired) presentation at the 2013 US Pharmacopeia Economic Adulteration Workshop. With Dr. Revue Méd. Vét., 2018, 169, 7-9, 152-156 Melamine levels in food products of animal origin in Iran. JOURNAL OF DAIRY & VETERINARY SCIENCES 23/03/17 A Review Paper on Melamine in Milk and Dairy Products.

FOOD ADDITIVES AND CONTAMINANTS 15/10/10 Migration of melamine from can coatings cross-linked with melamine-based resins, into food simulants and foods. EMERGING HEALTH THREATS JOURNAL Vol 3 (2010) Risks associated with melamine and related triazine contamination of food. AESAN - NOV 2015 - Prospective studies of bisphenol A and melamine in canned drinks. FOOD POLICY - 2011 - The China melamine milk scandal and its implications for food safety regulation. 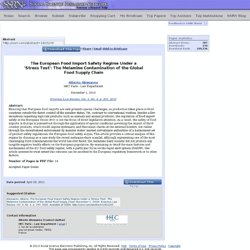 Yet, contrary to conventional wisdom, besides a few exceptions regarding high-risk products (such as animals and animal products), the regulation of food import safety in the European Union (EU) is not the focus of direct legislative attention. As a result, the safety of food imports in Europe is pursued not through the application of special conditions governing the import of third-country products, which would impose systematic and Herculean checks at the external borders, but rather through the decentralised enforcement by member states’ market surveillance authorities of a harmonised set of product safety regulations: the European food safety acquis. SOUTH CHINA MORNING POST 06/08/13 Fonterra has clearly forgotten the lesson from melamine milk scandal. If anyone should have learned the lessons of the 2008 scandal over baby milk formula tainted with melamine, which killed six mainland children and caused 300,000 to fall ill, it is Fonterra, the New Zealand dairy export giant. 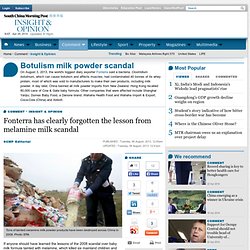 Fonterra sounded the alarm to the New Zealand government, which alerted Beijing, after its mainland partner, the state-owned Sanlu Group, failed to comply with a request for a full product recall. The result was one of the darkest chapters of China product safety, involving more than 20 companies. The industrial chemical was introduced in China and trust in Fonterra's product emerged intact. Incredibly, the company has lost it in one stroke in circumstances that are not dissimilar. Fonterra has revealed that a whey product used to make infant formula and sports drinks had been contaminated with bacteria that can cause potentially fatal botulism. China, New Zealand's biggest dairy product customer, has halted all imports and ordered a product recall. Journal of Agroalimentary Processes and Technologies 2013, 19(1), 16-21 Analysis of melamine contamination in meat and dairy pro. 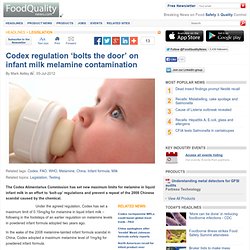 Under the agreed regulation, Codex has set a maximum limit of 0.15mg/kg for melamine in liquid infant milk – following in the footsteps of an earlier regulation on melamine levels in powdered infant formula adopted two years ago. In the wake of the 2008 melamine-tainted infant formula scandal in China, Codex adopted a maximum melamine level of 1mg/kg for powdered infant formula. Codex, which is jointly run by the UN Food and Agriculture Organisation (FAO) and the World Health Organisation (WHO), sets international food safety and quality standards. In many cases these standards are adopted as a basis for national legislation.

The melamine regulation is just one of four agreed at the Codex meeting in Rome, which began earlier this week. Bolted the door Maximum limits. Archives of Iranian Medicine, Volume 15, Number 4, April 2012 Liver Involvement in Melamine-associated Nephrolithiasis. Food Control Volume 26, Issue 2, August 2012, Melamine and other food safety and health scares in China: Comparing households wi. Abstract The purpose of this study was to determine whether household responses to melamine and other recent food safety and health scares in China in recent years differed between households that did or did not have young children (less than six years of age). 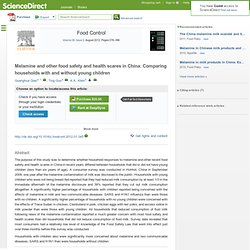 A consumer survey was conducted in Hohhot, China in September 2009, one year after the melamine contamination of milk was disclosed to the public. Households with young children who were not being breast-fed reported that they had reduced milk consumption by at least 1/3 in the immediate aftermath of the melamine disclosure and 39% reported that they cut out milk consumption altogether. Asian Journal of Agricultural Research, 5: 176-185. 2011 The Cause and Effect Analysis of the Melamine Incident in China. Melamine incident occurred in 2008, China. 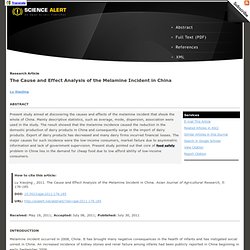 It has brought many negative consequences in the health of infants and has instigated social unrest in China. An increased incidence of kidney stones and renal failure among infants had been publicly reported in China beginning in early September 2008. This incident has badly affected the reputation of Chinese foods in the international market and specifically has affected the export of dairy products. 288-294.pdf (Objet application/pdf) Journal of Dairy Science Volume 94, Issue 7, July 2011, Residues of melamine and cyanuric acid in milk and tissues of dairy cows.

Received 18 November 2010; accepted 21 March 2011. OMS 06/07/10 International experts limit melamine levels in food. STELLENBOSCH UNIVERSITY - MARS 2011 - Thèse en ligne :THE TRANSMISSION OF MELAMINE FROM FEED TO POULTRY PRODUCTS. VIN 12/10/11 Pet owners receive $12.4 million in melamine case. Like most pet owners affected by the melamine contamination and pet food recall of 2007, Karl Rahder was reimbursed for about half of his claimed expenses under a $24 million class-action court settlement.

His cat, Inca, survived, but never regained full vigor. Photo courtesy of Karl Rahder. Owners of animals affected by food contaminated with melamine received slightly more than half of the money in a $24-million fund established to settle legal claims stemming from the largest pet food recall in North America. The balance of the fund went to lawyers’ fees and expenses, claims administration and public notices. In all, $12,357,277 was paid on 20,229 claims from the United States and Canada, according to information provided by the claims administrator, the accounting firm Heffler, Radetich & Saitta LLP in Philadelphia.