VIRUSES 20/04/20 Nipah Virus: Past Outbreaks and Future Containment. Viral outbreaks of varying frequencies and severities have caused panic and havoc across the globe throughout history. 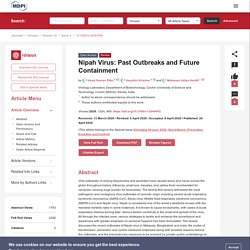 It is known to cause encephalitis, with cases of acute respiratory distress turning fatal. Various factors contribute to the onset and spread of the virus. ►▼ Show Figures Figure 1 This is an open access article distributed under the Creative Commons Attribution License which permits unrestricted use, distribution, and reproduction in any medium, provided the original work is properly cited. 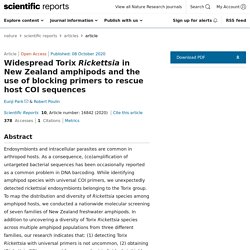 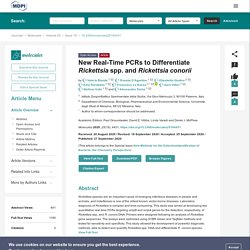 Laboratory diagnosis of Rickettsia is complex and time-consuming. This study was aimed at developing two quantitative real-time PCRs targeting ompB and ompA genes for the detection, respectively, of Rickettsia spp. and R. conorii DNA. Primers were designed following an analysis of Rickettsia gene sequences. The assays were optimized using SYBR Green and TaqMan methods and tested for sensitivity and specificity. This study allowed the development of powerful diagnostic methods, able to detect and quantify Rickettsia spp. ►▼ Show Figures Figure 1 This is an open access article distributed under the Creative Commons Attribution License which permits unrestricted use, distribution, and reproduction in any medium, provided the original work is properly cited. JOURNAL OF APPLIED MATHEMATICS 30/09/20 A Mathematical Model for Nipah Virus Infection. It has been reported that unprotected contact with the dead bodies of infected individuals is a plausible way of Nipah virus transmission. 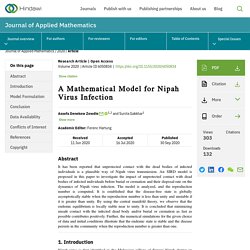 An SIRD model is proposed in this paper to investigate the impact of unprotected contact with dead bodies of infected individuals before burial or cremation and their disposal rate on the dynamics of Nipah virus infection. The model is analyzed, and the reproduction number is computed. It is established that the disease-free state is globally asymptotically stable when the reproduction number is less than unity and unstable if it is greater than unity. By using the central manifold theory, we observe that the endemic equilibrium is locally stable near to unity. It is concluded that minimizing unsafe contact with the infected dead body and/or burial or cremation as fast as possible contributes positively. CORNELL_EDU 19/11/20 NIH extends funding of research into deadly Nipah virus.

Nipah virus, which has a 40% to 90% mortality rate in humans, is listed by the World Health Organization as likely to cause future pandemics, and therefore requires “urgent action.” 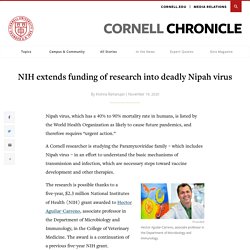 A Cornell researcher is studying the Paramyxoviridae family – which includes Nipah virus – in an effort to understand the basic mechanisms of transmission and infection, which are necessary steps toward vaccine development and other therapies. The research is possible thanks to a five-year, $2.3 million National Institutes of Health (NIH) grant awarded to Hector Aguilar-Carreno, associate professor in the Department of Microbiology and Immunology, in the College of Veterinary Medicine.

The award is a continuation of a previous five-year NIH grant. Fruit bats are the natural hosts to Nipah virus, with other animals, such as pigs, also susceptible. Pig farmers in Asia have become infected and can then transmit the virus to other people. BIORXIV 12/03/20 A Combined Evidence Approach to Prioritize Nipah Virus Inhibitors. BBC 12/01/21 The other virus that worries Asia (Nipah) FRONT MICROBIOL. 29/07/20 Sequencing the Genome of Indian Flying Fox, Natural Reservoir of Nipah Virus, Using Hybrid Assembly and Conservative Secondary Scaffolding.

Introduction Bats have been reported to be the natural reservoir of several zoonotic viruses that cause severe human diseases, including Marburg, Ebola, Nipah, Hendra, SARS, and MERS viruses (Wang and Anderson, 2019). 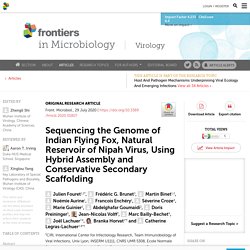 ABC 26/07/11 Scientists concerned as hendra virus jumps species barrier. MARK COLVIN: No dog has ever been diagnosed with hendra virus before today. 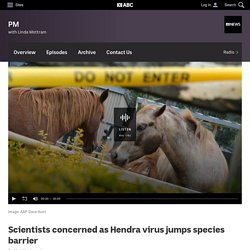 But today Biosecurity Queensland announced that a dog had tested positive for the potentially fatal disease. Researchers on hendra virus are worried and baffled. It's also the first time that hendra virus has been detected in the wild in anything other than flying foxes, horses and humans. NPJ 15/04/19 Rabies-based vaccine induces potent immune responses against Nipah virus. cDNA construction of vaccine vectors We inserted codon-optimized Nipah virus glycoprotein gene G (Bangladesh strain, GenBank: AY988601.1) between the N and P genes of the parental BNSP333 rabies vector using BsiWI and NheI restriction sites(16). 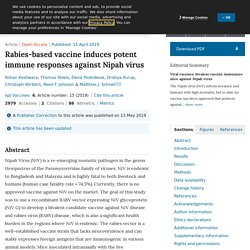 Codon bias optimization for human codon use was carried out by GenScript Inc. The resulting plasmid was designated BNSP333-coNiV-G (NIPARAB), and the correct sequence of the plasmid was confirmed by sequencing using primers targeting the region between the N and P genes. Recovery of recombinant vectors X-tremeGENE 9 transfection reagent (Roche Diagnostics) in Opti-MEM was used to transfect full-length viral cDNA clones along with support plasmids bearing RABV N, P, G, and L genes under the control of a T7 promoter and a plasmid expressing T7 RNA polymerase into BSR cells on 6-well plates as described previously.31 Successful recovery was determined by a rabies focus-forming assay. VOX SANGUINIS 18/12/19 Inactivation of three emerging viruses–severe acuterespiratory syndrome coronavirus, Crimean–Congohaemorrhagic fever virus and Nipah virus–in plateletconcentrates by ultraviolet C light and in plasma bymethylene blue plus visible li. 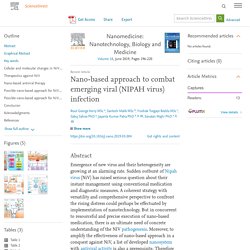 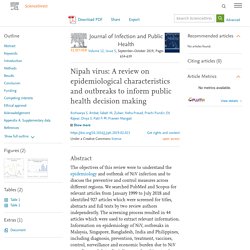 Kulkarni, C. Tosh, G. Venkatesh, D.S. JOHNS HOPKINS UNIVERSITY 03/01/20 A Hopkins scientist is studying the ways the deadly Nipah virus affects carrier fruit bats to better understand how it spreads to humans. By Carrie Arnold /Published Jan 3 Long before dawn one August morning, Emily Gurley and her team set out for the roost site. The night before, a research team in Faridpur, Bangladesh, had set up nets after the fruit bats flew off to forage. The nets caught about a dozen bats returning to the roost; now, Gurley and her colleagues gathered to collect samples from them. It was all part of a new endeavor to get one step ahead of a virus that can kill up to 90% of those infected with a terrifying combination of encephalitis and pneumonia. INFECTION ECOLOGY & EPIDEMIOLOGY 04/05/16 The equine Hendra virus vaccine remains a highly effective preventative measure against infection in horses and humans: ‘The imperative to develop a human vaccine for the Hendra virus in Australia’

To the Editor In their commentary article, ‘The imperative to develop a human vaccine for the Hendra virus in Australia’, Zahoor and Mudie (1 Zahoor BA, Mudie LI. HOPKINS BLOOMBERG PUBLIC HEALTH MAGAZINE - 2019 - Tracking the Nipah Virus. Long before dawn one August morning, Emily Gurley and her team set out for the roost site. The night before, a research team in Faridpur, Bangladesh, had set up nets after the fruit bats flew off to forage. The nets caught about a dozen bats returning to the roost; now, Gurley and her colleagues gathered to collect samples from them. It was all part of a new endeavor to get one step ahead of a virus that can kill up to 90% of those infected with a terrifying combination of encephalitis and pneumonia. Despite the best tricks science had up its sleeve, the world’s epidemiologists always remained one step behind. Scientists have been playing catch-up since they detected the first Nipah virus outbreak in Malaysia in 1998.

Now, thanks to a $10 million grant from DARPA that seeks to keep U.S. soldiers safe from global infectious threats, Gurley has a chance to get ahead of Nipah. FRONT. MICROBIOL. 11/03/19 Rapid and Specific Detection of All Known Nipah virus Strains’ Sequences With Reverse Transcription-Loop-Mediated Isothermal Amplification. Introduction Nipah virus (NiV) belongs to the family Paramyxoviridae and genus Henipavirus, which contains another four species: Hendra virus (HeV), Cedar virus, Mojiang virus, and Kumasi virus (McLinton et al., 2017). NiV is classified as a Biosafety Level 4 (BSL-4) agent because of its high pathogenicity and mortality rate, which ranges from 40 to 100% (SEARO, 2014), and causes fatal human encephalitis and respiratory disease when it spills over from its bat reservoir – Pteropod fruit bats (flying foxes).

VETERINARY QUARTERLY 22/04/19 Nipah virus: epidemiology, pathology, immunobiology and advances in diagnosis, vaccine designing and control strategies - a comprehensive review. FAO - AOUT 2018 - Nipah virus Frequently asked questions. Updated August 2018 What is Nipah and where is it found? Nipah is a zoonotic disease, meaning it is transmitted from animals to humans. The disease is caused by a virus closely related to Hendra virus, both of which are members of the family Paramyxoviridae. Nipah was named after the village in Malaysia where pig farmers first became ill with the disease, and other human outbreaks have been reported in Singapore, Bangladesh and India. Fruit bats of the Pteropus genus, also known as flying foxes, are the natural hosts for Nipah virus. CEPI_NET 07/03/19 Nipah - The Next Global Pandemic?

NiV infections were observed in humans in Bangladesh, India and in the first outbreak in Malaysia, where pigs were also infected. HeV infections occurred in horses in the North-Eastern regions of Australia, with singular transmission events to humans. CSIRO 16/07/13 Boosting the frontline fight against the Hendra virus. Trop. Med. Infect. Dis. 30/05/18 Mapping Disease Transmission Risk of Nipah Virus in South and Southeast Asia. Since 1998, Nipah virus (NiV) (genus: Henipavirus; family: Paramyxoviridae), an often-fatal and highly virulent zoonotic pathogen, has caused sporadic outbreak events. Fruit bats from the genus Pteropus are the wildlife reservoirs and have a broad distribution throughout South and Southeast Asia, and East Africa. Understanding the disease biogeography of NiV is critical to comprehending the potential geographic distribution of this dangerous zoonosis. This study implemented the R packages ENMeval and BIOMOD2 as a means of modeling regional disease transmission risk and additionally measured niche similarity between the reservoir Pteropus and the ecological characteristics of outbreak localities with the Schoener’s D index and I statistic.