AGROTECHNOLOGY - 2018 - Effect of Climate Change on Rice. Atmos. Chem. Phys., 18, 10419–10431, 2018 Controlling variables and emission factors of methane from global rice fields. PHYS_ORG 30/05/19 Colombia could lose 60% of land suitable for irrigated rice due to climate change. Without significant global reductions in greenhouse gas emissions, Colombia will have 60 percent less land suitable for rice production by the 2050s, according to a new study by the CGIAR Research Program on Climate Change, Agriculture and Food Security (CCAFS). 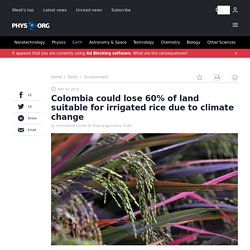 Due primarily to increased temperatures and decreased rainfall—as opposed to sea-level rise, which is the driver of projected change to rice production in some Asian countries—the research shows suitable conditions will need to be found at higher elevations when low-altitude fields are too hot or dry for irrigated rice production. The study found that Colombia's suitable arable land for rice is currently 4.4 million hectares but could be reduced to 1.8 million hectares in a few decades. Mitigation could require complex decisions around land-use change, changes in crop cultivation, and food security, said the authors. Mitigate quickly More information: F. Provided by International Center for Tropical Agriculture (CIAT) NEW FOOD MAGAZINE 01/11/19 Climate change research predicts rice yields to fall and arsenic to rise. 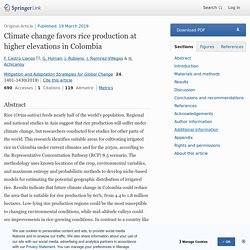 The analysis reduces an initial set of 28 variables to 11 based on VIF values below 10. We eliminated precipitation in the driest quarter, percent silt in the soil and precipitation of the wettest month because they contributed little to the model (< 5%). Three of the eight remaining variables explained a substantial part of the distribution—accumulated precipitation during the months of August, September, and October (31%), followed by annual range of temperature (26%) and then by average temperature during the wettest quarter (12.4%).

Two variables accounted for low yet important levels of variance—precipitation of the driest month (8.6%) and precipitation of the coldest quarter (8.3%). The model performed well in general. JOURNAL OF AGRICULTURE AND NATURAL RESOURCES 25/10/19 Agronomic management and climate change scenario simulations on productivity of rice, maize and wheat in central Nepal using DSSAT ver 4.5 crop model. INTERNATIONAL JOINT COMMISSION 21/08/18 Climate Change and Dams Present Challenges for Wild Rice at Rainy Lake. Wild rice has been struggling in historically fertile ground at Rainy Lake, located at the Ontario-Minnesota border. 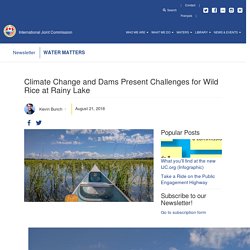 While climate change has played a role in the declining success of the notoriously sensitive plant, water level and flow management by humans has played a part, too. The damming and water management regime of Rainy Lake and its water system over the decades has been a major contributing factor to the decline of wild rice, or manoomin (as it’s known in Ojibwe), with successful harvests only occurring twice over the past 13 years, according to Allan Yerxa, lands and resources coordinator for the Couchiching First Nation.

Rainy Lake is linked to Namakan Lake, and further downstream, Lake of the Woods. Water levels on the lakes are managed through a series of dams. Operators are required to try and keep water levels within a band known as the rule curves, with oversight by the IJC’s Rainy-Lake of the Woods Watershed Board. More difficult to plan for is climate change. CURRENT SCIENCE, VOL. 102, NO. 9, 10 MAY 2012 Impact of climate change on weeds in the rice–wheat cropping system. Climate Change and Food Security in South Asia - 2011 - Incidence and Severity of Rice Diseases and Insect Pests in Relation to. 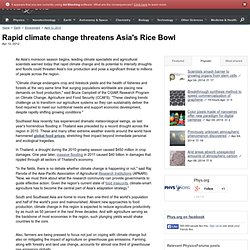 "Climate change endangers crop and livestock yields and the health of fisheries and forests at the very same time that surging populations worldwide are placing new demands on food production," said Bruce Campbell of the CGIAR Research Program on Climate Change, Agriculture and Food Security (CCAFS). "These clashing trends challenge us to transform our agriculture systems so they can sustainably deliver the food required to meet our nutritional needs and support economic development, despite rapidly shifting growing conditions. " Southeast Asia recently has experienced dramatic meteorological swings, as last year's horrendous flooding in Thailand was preceded by a record drought across the region in 2010. INTECH 05/11/11 The Influence of Climate Change on Rice in China from 1961 to 2009.

Mitigating the impact of climate change on rice disease resistance in East Africa. CONFEDERATION SUISSE - 2009 - CLIMATE CHANGE - The system of rice intensification - Case study – India. SPYGHANA 02/06/12 Ghana’s rice production will fall due to climate change – Experts. Ghana is likely to experience a shortfall in rice production due to erratic rainfall and excessive heat. 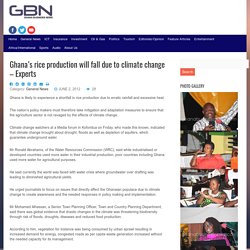 The nation’s policy makers must therefore take mitigation and adaptation measures to ensure that the agriculture sector is not ravaged by the effects of climate change. Climate change watchers at a Media forum in Koforidua on Friday, who made this known, indicated that climate change brought about drought, floods as well as depletion of aquifers, which guarantee underground water. Mr Ronald Abrahams, of the Water Resources Commission (WRC), said while industrialised or developed countries used more water in their industrial production, poor countries including Ghana used more water for agricultural purposes.

He said currently the world was faced with water crisis where groundwater over drafting was leading to diminished agricultural yields. Source: GNA. East Asia Rice Working Group 2009 DOCUMENTATION OF SELECTED ADAPTATION STRATEGIES TO CLIMATE CHANGE IN RICE CULTIVATION. CLIMARICE - Sustaining rice production in a changing climate. The main emphasis of the ClimaRice project is to develop local ownership through active participation of stakeholders in the design, implementation and management of adaptation strategies to ensure the sustainability of rice production. 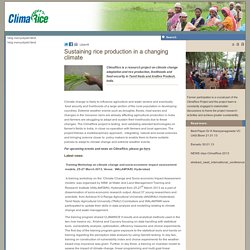 ClimaRice project team members and embassy staff at the Nagarjuna Sagar Dam, Andhra Pradesh, India. The Project has partners from India, USA and Norway and is funded by the MFA/Norwegian Embassy in India. Farmer participation is a crucial part of the ClimaRice Project and the project team is constantly engaged in stakeholder discussions to frame the project research activities and achieve greater sustainability. Preparation and raising techniques of mat nursery being explained and demonstrated to farmers in Tamil Nadu. The ClimaRice project emphasizes women's important role in agriculture and works with Self Help Groups to empower women through capacity building. Project team interacting with farmers in Andhra Pradesh. CURRENT SCIENCE 10/01/17 Impact of projected climate change on rice (Oryza sativaL.) yield using CERES-rice model in different agroclimatic zones of India. SUSTAINABILITY 14/07/16 Geographical Variation of Climate Change Impact on Rice Yield in the Rice-Cropping Areas of Northeast China during 1980–2008. 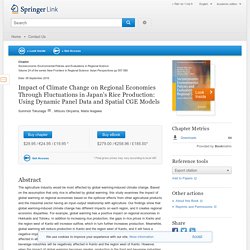 ARSTECHNICA 09/01/17 Future rice yield losses due to climate change could be extreme. Rice is a staple food for more than half of the world’s population. 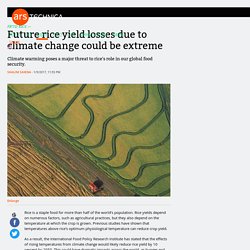 Rice yields depend on numerous factors, such as agricultural practices, but they also depend on the temperature at which the crop is grown. Previous studies have shown that temperatures above rice's optimum physiological temperature can reduce crop yield. As a result, the International Food Policy Research Institute has stated that the effects of rising temperatures from climate change would likely reduce rice yield by 10 percent by 2050. This could have dramatic impacts across the world, as hunger and malnutrition are already significant problems. INTERNATIONAL RICE RESEARCH INSTITUTE - 1995 - Modeling the Impact of Climate Change on Rice Production in Asia. Procedia Environmental Sciences Volume 33, 2016, The Effect of Temperature Rise to Rice Crop Yield in Indonesia uses Shierary Rice Model with Geographical Information System (GIS) Feature. JOURNAL OF AGRICULTURAL EXTENSION AND RURAL DEVELOPMENT - FEV 2017 - Utilisation of climate change adaptation strategies among rice farmers in three states of Nigeria.

The phenomenon of climate change has negative impacts on rice production in Nigeria as it lowers rice output and reduces farmers’ income with a resultant depreciation in their livelihood. 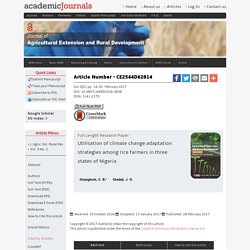 Madras School of Economics - FEV 2010 - Climate Variability and Agricultural Productivity Case Study of Rice Yields in Northern India. TECHNOLOGY REVIEW 04/05/17 Reinventing Rice for a World Transformed by Climate Change. Pamela Ronald stands in front of two rows of rice plants, sprouting from black plastic pots, in a stifling greenhouse on the edge of the University of California, Davis, campus. 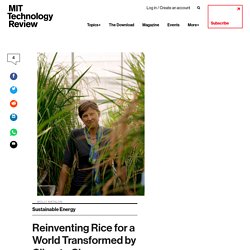 Researchers in Ronald's plant genetics lab starved the grasses of water for more than a week. The ones on the right, the control in the ongoing experiment, are yellowing and collapsing. The leaves in the adjacent plants, equipped with an added gene, are thick, tall, and green. The hope is that these or similar genetic alterations could help rice and other crops survive devastating droughts, preventing food shortages in some of the poorest parts of the world. Ronald, a trim scientist with short brown hair, smiles as she looks down at the early results. She has spent the last three decades working to make rice, a food staple for more than half of the world's population, more resistant to environmental stress. Mountain flowers Ronald grew up San Mateo, California. Overcast But people do, of course. DOWNTOEARTH 26/05/17 Climate change to affect rice productivity, finds a new study. Climate change to affect rice productivity, finds a new study Elevated temperature was found to have a negative impact on rice productivity, even nullifying the positive effects of higher level of CO2 The study involved actual cultivation of the cereal in a climate control chamber.

EQUAL TIMES 06/03/20 Can rice survive climate change? Every June, Thailand’s fields fill with millions of farmers as they begin to plant rice, the foundation of the country’s diet. In 2015, however, the land was so dry that the government asked them to postpone the start of the season and to refrain from growing a second crop during the winter. Production fell by 15 per cent that year and it took two years for the world’s second largest rice exporter to return to former production levels.

Thailand is not the only country where rice is threatened by the changes in rainfall and temperature patterns linked to the climate emergency. In Vietnam, rising sea levels are increasing soil salinity to such an extent that the paddy fields will no longer be productive. In West Bengal, in eastern India, drought and flooding are already causing recurrent crop failures.