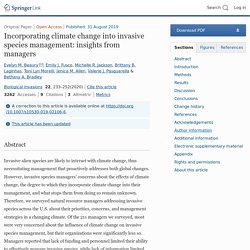 One manager reported managing at a national scale. Therefore, most managers operate within a single state. State(s) where survey participants manage, including one manager who manages in all 50 states (i.e., operates at a national scale) Our survey population mostly consisted of managers employed by a government agency (70%): 35 Federal, 79 state, and 32 municipal government employees. Journal of Ecology and Environment 26/11/19 Potential impact of climate change on plant invasion in the Republic of Korea. This study estimated current potential and future predicted habitat of the most troublesome invasive plant species in the ROK (11 species) in different provinces. 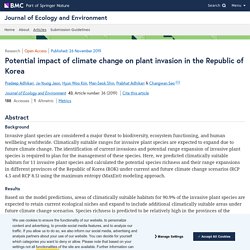 The performance of the ENMs should not be altered by prevalence (data size), but there should be an integration of both omission and commission errors (Allouche et al. 2006). The AUC value is independent of the prevalence. However, this index is sometimes criticized because it equally weights the commission and omission errors and avoids real prediction (Lobo et al. 2008). Therefore, we applied both AUC and TSS values to evaluate the model performance. The mean value of AUC shows that the model performance was very good, demonstrating good prediction results (Swets 1988). YALE_EDU 11/07/18 Can A Tiny Fern Help Fight Climate Change and Cut Fertilizer Use? Scientists have sequenced the entire genome of the tiny fern species Azolla filiculoides, a wunder-plant that played a pivotal role in cooling our planet 50 million years ago. 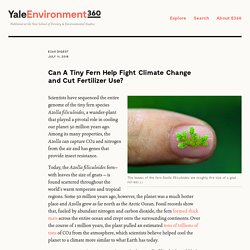 Among its many properties, the Azolla can capture CO2 and nitrogen from the air and has genes that provide insect resistance. Today, the Azolla filiculoides fern— with leaves the size of gnats — is found scattered throughout the world’s warm temperate and tropical regions. Some 50 million years ago, however, the planet was a much hotter place and Azolla grew as far north as the Arctic Ocean. Fossil records show that, fueled by abundant nitrogen and carbon dioxide, the fern formed thick mats across the entire ocean and crept onto the surrounding continents. Over the course of 1 million years, the plant pulled an estimated tens of trillions of tons of CO2 from the atmosphere, which scientists believe helped cool the planet to a climate more similar to what Earth has today. USDA via INVASIVESPECIES_GOV - DEC 2014 - Bioinvasions in a Changing World: A Resource on Invasive Species-Climate Change Interactions for Conservation and Natural Resource Management.

Highly adaptable non-native plants have a competitive edge in a changing climate. 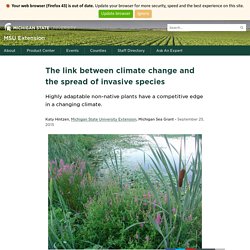 Katy Hintzen, Michigan State University Extension, Michigan Sea Grant - September 25, 2015 Invasive species represent a major threat to the health of Great Lakes ecosystems and economies. They have already inflicted hundreds of millions of dollars in damage to major industries in the Great Lakes including sport and commercial fishing, water treatment, power generation and tourism. ISSG - AVRIL 2010 - Climate Change and Invasive Species in the Pacific. INTERNATIONAL JOURNAL OF ORGANIC EVOLUTION 10/10/19 The evolutionary potential of an insect invader under climate change (Harmonia axyridis) Although the impacts of climate change and invasive species are typically studied in isolation, they likely interact to reduce the viability of plant and animal populations. 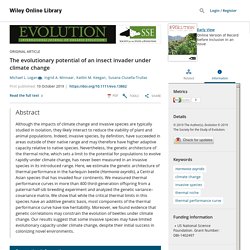 Indeed, invasive species, by definition, have succeeded in areas outside of their native range and may therefore have higher adaptive capacity relative to native species. Nevertheless, the genetic architecture of the thermal niche, which sets a limit to the potential for populations to evolve rapidly under climate change, has never been measured in an invasive species in its introduced range.

Here, we estimate the genetic architecture of thermal performance in the harlequin beetle (Harmonia axyridis), a Central Asian species that has invaded four continents. We measured thermal performance curves in more than 400 third‐generation offspring from a paternal half‐sib breeding experiment and analyzed the genetic variance–covariance matrix.

INTERNATIONAL JOINT COMMISSION 15/10/19 Effects of Climate Change, Threats from Invasive Species and Binational Coordination are Top Concerns for Lake Superior Region’s Residents. In its last round of consultations and public meetings to determine progress under the Great Lakes Water Quality Agreement by Canada and the United States, the IJC heard a consistent message from residents in Thunder Bay, Ontario; Duluth, Minnesota; and Ashland, Wisconsin: Lake Superior is central to who they are as a region, and it is under threat in several ways. 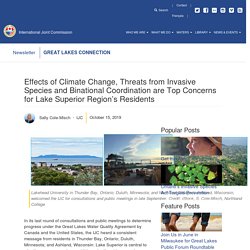 What happens to the lake happens to its residents and protecting the health of the entire ecosystem requires urgent action. Thunder Bay, Ontario The Commission started its travels on September 23 at Lakehead University in Thunder Bay, where it sponsored a day-long symposium on climate change impacts and adaptation in the Lake Superior basin. Department of Geography Associate Professor Dr. Rob Stewart organized the “Climate Con 2019” symposium. Austin confirmed that Lake Superior is experiencing the most drastic change in reduced ice cover and warmer average summer water temperatures, up to 1.2 degrees Celsius. Int-arch-photogramm-remote-sens-spatial-inf-sci.net - 2017 - Satellite Observed Water Quality Changes in the Laurentian Great Lakes Due to Invasive Species, Anthropogenic Forcing, and Climate Change. GLOBAL CHANGE BIOLOGY 31/07/17 Protected areas offer refuge from invasive species spreading under climate change. 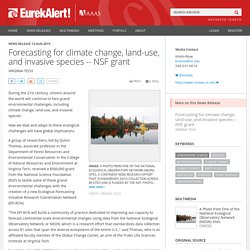 How we deal and adapt to these ecological challenges will have global implications. A group of researchers, led by Quinn Thomas, associate professor in the Department of Forest Resources and Environmental Conservation in the College of Natural Resources and Environment at Virginia Tech, received a $500,000 grant from the National Science Foundation (NSF) to tackle some of these grand environmental challenges with the creation of a new Ecological Forecasting Initiative Research Coordination Network (EFI-RCN). Funded by the NSF, NEON helps researchers understand the rapid and complex ecological changes we are facing on the North American continent. The EFI-RCN is composed of a network of collaborators throughout Virginia Tech and across the United States. "All partner institutions have their strengths," Thomas said. ENTOMOLOGICAL RESEARCH 12/11/18 Predicting the Potential Distribution of an Invasive Species, Solenopsis invicta Buren (Hymenoptera: Formicidae), under Climate Change using Species Distribution Models.

The red imported fire ant is considered one of the most notorious invasive species because of its adverse impact on both humans and ecosystems. 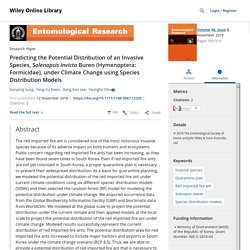 Public concern regarding red imported fire ants has been increasing, as they have been found seven times in South Korea. Even if red imported fire ants are not yet colonized in South Korea, a proper quarantine plan is necessary to prevent their widespread distribution. As a basis for quarantine planning, we modeled the potential distribution of the red imported fire ant under current climate conditions using six different species distribution models (SDMs) and then selected the random forest (RF) model for modeling the potential distribution under climate change. We acquired occurrence data from the Global Biodiversity Information Facility (GBIF) and bioclimatic data from WorldClim. ECOLOGY AND EVOLUTION 04/05/18 Insights from modeling studies on how climate change affects invasive alien species geography. Biological invasions are an important driver of biodiversity loss. 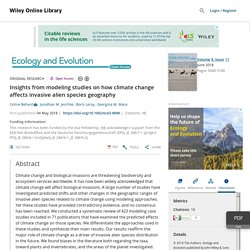 During the last century, they have been associated with nearly 60% of species extinctions (Bellard, Cassey, & Blackburn, 2016). They also jeopardize ecosystem services and challenge human health and economic growth (Simberloff et al., 2013). Because of increasing trade and habitat disturbance, the pressure caused by biological invasions is likely to continue or even increase (Hulme, 2009). Climate change is also expected to alter invasion processes. For instance, a higher frequency of extreme weather and the consequent opening of shipping lanes in the Arctic (Miller & Ruiz, 2014) may facilitate transport of alien species, sometimes with dramatic impacts on ecosystems and species of conservation concern. There is thus an urgent need to understand the relationship between climate change and IAS distributions, especially those that may have a major impact on biodiversity. 2.1 Literature search 2.2 Data collection Box 1. 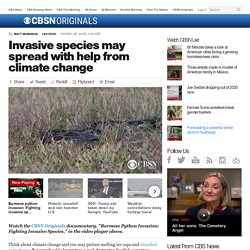 Think about climate change and you may picture melting ice caps and stranded polar bears. But you should also picture a reef-destroying lionfish, voracious Burmese python, or disease-spreading Asian tiger mosquito. As seasonal cycles shift and ecosystems are thrown off balance, those invasive species — and many others — could infiltrate a broader range of territories with devastating consequences to our health, vital habitats and industries. A species is considered invasive when it moves into an ecosystem that has not evolved to control it.

Once a species gains a foothold in territory without its natural predators, it multiplies and eventually takes over. However, climate change has already started to exacerbate the situation. In the last three to five decades, the U.S. has suffered the impact of several invasive species. CABI - NOV 2010 - Climate Change and Invasive Alien Species. Bugwood Center for Invasive Species and Ecosystem Health VIA youtube 12/06/19 Implications of Climate Change for Invasive Species.