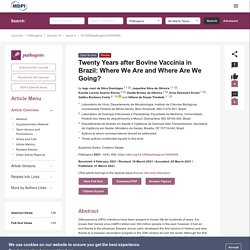 Twenty Years after Bovine Vaccinia in Brazil: Where We Are and Where Are We Going? Journal of Feline Medicine and Surgery - 2013 - COWPOX VIRUS INFECTION IN CATS - ABCD guidelines on prevention and management. Veterinary Record - 2011 - Fatal cowpox virus infection in two squirrel monkeys (Saimiri sciureus) 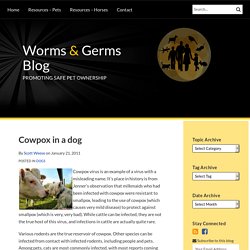 It’s place in history is from Jenner’s observation that milkmaids who had been infected with cowpox were resistant to smallpox, leading to the use of cowpox (which causes very mild disease) to protect against smallpox (which is very, very bad). While cattle can be infected, they are not the true host of this virus, and infections in cattle are actually quite rare. Various rodents are the true reservoir of cowpox. Other species can be infected from contact with infected rodents, including people and pets. Among pets, cats are most commonly infected, with most reports coming from central Europe. Cowpox infections in dogs are very rare, but a case was recently described in Veterinary Dermatology (von Bomhard et al 2011). People can be infected with cowpox from pets. SCIENCEMAG 17/02/11 First U.S. Cowpox Infection: Acquired From Lab Contamination. A student laboratory worker at the University of Illinois, Urbana-Champaign, is the first person in the United States to come down with cowpox, a less dangerous relative of smallpox, and the culprit is lab contamination. 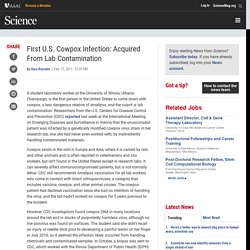 Researchers from the U.S. Centers for Disease Control and Prevention (CDC) reported last week at the International Meeting on Emerging Diseases and Surveillance in Vienna that the unvaccinated patient was infected by a genetically modified cowpox virus strain in her research lab, one she had never even worked with, by inadvertently handling contaminated materials. CDC EID - AOUT 2011 - Cowpox Virus in Llama, Italy. Surveillance of Leprosy in Kiribati, 1935–2017 [PDF - 846 KB - 8 pages] S. 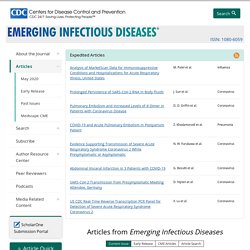 T. Chambers et al. In Kiribati, unlike most countries, high and increasing numbers of cases of leprosy have been reported despite the availability of multidrug therapy and efforts to improve case finding and management. Historic records show that 28 cases had been identified by 1925. Biphasic Outbreak of Invasive Group A Streptococcus Disease in Eldercare Facility, New Zealand [PDF - 1.42 MB - 8 pages] Viruses. 2019 Nov 18;11(11). Molecular Detection and Characterization of the First Cowpox Virus Isolate Derived from a Bank Vole. Cowpox virus (CPXV) is a zoonotic orthopoxvirus (OPV) that infects a wide range of mammals. 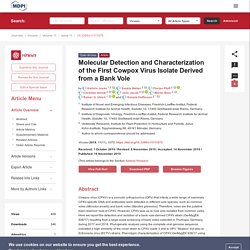 CPXV-specific DNA and antibodies were detected in different vole species, such as common voles (Microtus arvalis) and bank voles (Myodes glareolus). Therefore, voles are the putative main reservoir host of CPXV. However, CPXV was up to now only isolated from common voles. Here we report the detection and isolation of a bank vole-derived CPXV strain (GerMygEK 938/17) resulting from a large-scale screening of bank voles collected in Thuringia, Germany, during 2017 and 2018. Phylogenetic analysis using the complete viral genome sequence indicated a high similarity of the novel strain to CPXV clade 3 and to OPV “Abatino” but also to Ectromeliavirus (ECTV) strains. ►▼ Show Figures Figure 1 This is an open access article distributed under the Creative Commons Attribution License which permits unrestricted use, distribution, and reproduction in any medium, provided the original work is properly cited. 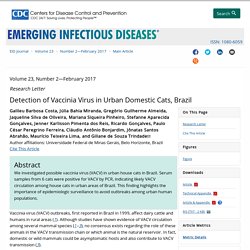 Although studies have shown evidence of VACV circulation among several mammal species (1–3), no consensus exists regarding the role of these animals in the VACV transmission chain or which animal is the natural reservoir. In fact, domestic or wild mammals could be asymptomatic hosts and also contribute to VACV transmission (3). J Med Virol. 2019 Nov;9 Screening and evaluation of potential inhibitors against vaccinia virus from 767 approved drugs. Corresponding Author E-mail address: yuyongxin@nifdc.org.cn. 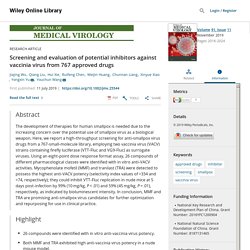 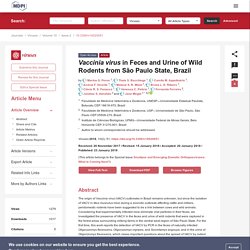 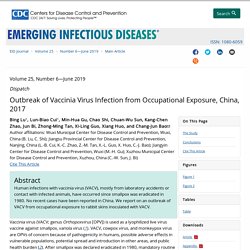 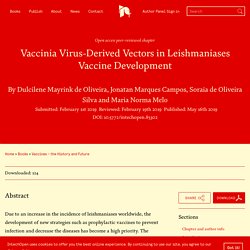 Introduction Leishmaniases are important neglected tropical diseases (NTD) caused by protozoan parasites from the genus Leishmania Ross, 1903, of which more than 20 species are pathogenic to humans. Such parasites are transmitted by about 30 species of infected female sandflies (genus Phlebotomus and Lutzomyia) [1, 2], and their biological cycle alternates between the amastigote forms (obligatory intracellular), in the mammalian host, and promastigote forms (extracellular), in the vector digestive tract [3]. CIDRAP 24/04/19 Report details vaccinia virus outbreak in 5 Chinese workers. For the first time in decades, China reported a human outbreak of vaccinia virus (VACV), according to a study yesterday in Emerging Infectious Diseases. VACV is an orthopoxvirusvirus that is used in the live-virus vaccine against smallpox. It is related to cowpox and monkeypox viruses and can cause severe illness in humans.

Exposure from inoculated lab rabbits The study details how five Chinese powder processing workers contracted VACV in 2017, after pulverizing a batch of frozen rabbit skins. The animals had been inoculated with VACV in a pharmaceutical lab 5 days previously, and their pulverized skin was being studied for analgesic properties. All five case-patients handled the pulverized skin in an enclosed workspace over the course of 1 hour, and none wore personal protective equipment.