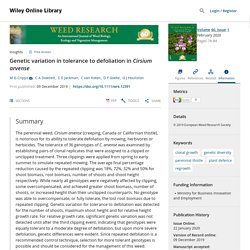 The tolerance of 36 genotypes of C. arvense was examined by establishing pairs of clonal replicates that were assigned to a clipped or unclipped treatment. Three clippings were applied from spring to early summer to simulate repeated mowing. The average final percentage reduction caused by the repeated clipping was 18%, 72%, 32% and 50% for shoot biomass, root biomass, number of shoots and shoot height respectively. While nearly all genotypes were negatively affected by clipping, some overcompensated, and achieved greater shoot biomass, number of shoots, or increased height than their unclipped counterparts. Introduction Weeds in agricultural environments are routinely managed through a variety of techniques that impose defoliation, such as mowing, herbicides and biological control agents. Plant Science Volume 94, Issues 1–2, 1993, Septoria cirsii, a potential biocontrol agent of Canada thistle and its phytotoxin—ß-nitropropionic acid. WEED RESEARCH 29/01/20 A novel approach to estimating the competitive ability of Cirsium arvense in cereals using unmanned aerial vehicle imagery.

Eight experiments were carried out in Denmark to determine the yield loss of spring barley due to Cirsium arvense in farmers' fields and to suggest and evaluate a novel approach for quantifying C. arvense infestation in large plots.

Literature about the competitive ability of C. arvense is old, scattered and inconclusive, and existing models for estimating crop yield loss are based on data from North America. This study showed that C. arvense coverage could be quantified from unmanned aerial vehicle imagery using a manual image analysis procedure. This gave similar results as scoring the coverage. Yield loss of spring barley due to C. arvense infestation assessed at harvest was given by Y = 100·(1−exp(−0.00170·X )) where Y is the percentage of crop yield loss and X is the percentage of C. arvense coverage. The yield loss was much lower than estimates from models that have been developed in North America. Yorkshirepost_co_uk 17/07/19 Why thistles are a menace for livestock but are ecologically important - Roger Ratcliffe. Farmers mostly hate thistles, regarding them as one of the most pestilential weeds of all since they often grow vigorously in fields which are grazed by livestock or used for silage. 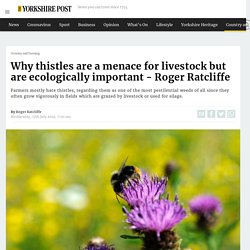 Wednesday, 17th July 2019, 7:00 am Sign up to our daily newsletter The i newsletter cut through the noise As a result there are fewer to be found in the countryside these days, and one footpath in Airedale where I have long had to negotiate jagged thistles with care has recently been purged of them. The commonest variety is the creeping thistle – Cirsium arvense – a perennial which spreads its rootstock widely to create big colonies on grassland and pretty much anywhere else where the ground remains undisturbed. Arguably the biggest nuisance to farmers, though, is the spear thistle (C. vulgare) – a biennial that establishes itself unnoticed in the first year and can then sprout an impressive spread of prickly fronds more than three ft wide and stand over six feet tall. Another species, the melancholy thistle (C. EAST TENNESSEE STATE UNIVERSITY - DEC 2018 - Thèse en ligne : Direct and Indirect Effects of Invasive Cirsium arvense on Pollination in Southern Appalachian Floral Communities. 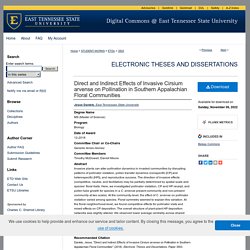 The direction of invasive effects (competitive, neutral, and facilitative) may be partially determined by spatial scale and species’ floral traits. Here, we investigated pollinator visitation, CP and HP receipt, and pollen tube growth for species in a C. arvense present community and non-present community at two scales. At the community-level, the effect of C. arvense on pollinator visitation varied among species. Floral symmetry seemed to explain this variation. MONTANA STATE UNIVERSITY - 2018 - A Meta-analysis of Canada Thistle Cirsium arvense Management. ACTA AGRICULTURAE SCANDINAVICA 30/09/18 Growth and development of Cirsium arvense in relation to herbicide dose, timing of herbicide application and crop presence. NeoBiota 13: 31–39, 2012 Plant pathogens as biocontrol agents for Cirsium arvense – an answer to Müller and Nentwig. ORGANICEPRINTS - 2012 - A physiologically-based model of Cirsium arvense and Tussilago farfara growth and control.

Flora - Morphology, Distribution, Functional Ecology of Plants Volume 206, Issue 12, December 2011, Increased performance of Cir. Abstract The Evolution of Increased Competitive Ability (EICA) hypothesis suggests that plants from the invasive range should perform better than plants of the same species from the native range. 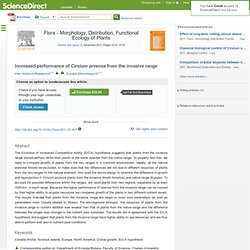 To properly test this, we need to compare growth of plants from the two ranges in a common environment. Ideally, all the natural enemies should be excluded, to make sure that the differences are not due to different response of plants from the two ranges to the natural enemies. We used the above design to examine the difference in growth and reproduction in Cirsium arvense plants from the invasive (North America) and native range (Europe). To account for possible differences within the ranges, we used plants from two regions, separated by at least 1000 km, in each range. Keywords Canada thistle; Noxious weeds; Europe; North America; Clonal growth; EICA hypothesis Copyright © 2011 Elsevier GmbH. 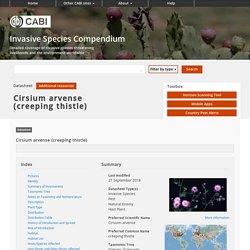 WEED RESEARCH 04/06/18 Assessment of the compensation point of Cirsium arvense and effects of competition, root weight and burial depth on below‐ground dry weight – leaf stage trajectories. Farmers are recommended to employ mechanical control when Cirsium arvense is most sensitive to disturbance. 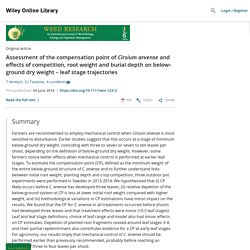 Earlier studies suggest that this occurs at a stage of minimum below‐ground dry weight, coinciding with three to seven or seven to ten leaves per shoot, depending on the definition of below‐ground dry weight. However, some farmers notice better effects when mechanical control is performed at earlier leaf stages. To estimate the compensation point (CP), defined as the minimum weight of the entire below‐ground structure of C. arvense and to further understand links between initial root weight, planting depth and crop competition, three outdoor pot experiments were performed in Sweden in 2013‐2014.