PARLEMENT EUROPEEN - Réponse à question P-000726/2021 Urgent need for a new action plan to combat wildlife trafficking. NATIONAL GEOGRAPHIC 18/12/20 The black-market trade in wildlife has moved online, and the deluge is 'dizzying' When a squad of federal and state law enforcement agents with guns and bulletproof vests entered a single-story brick home in Buffalo, New York, on July 5, 2018 they were searching for business records of a suspected criminal enterprise. 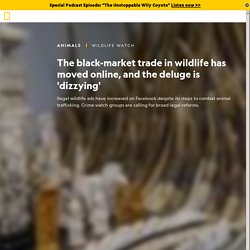 Experts trained to handle dangerous exotic cats congregated in a sunroom pungent with the odor of cat urine. Wearing blue latex gloves, the wildlife handlers carefully collected two young caracals distinguished by their long, black-tipped ear tufts; four juvenile servals, copper-colored with handsome black spots; and an adult savannah cat, a cross between a serval and a house cat. The homeowner, Christopher Casacci, 38, a short man with buzz-cut black hair, watched as the handlers hauled the cats away in plastic carriers to a truck outside, protesting that the savannah cat, named Tigger, was his family’s pet.

If convicted, Casacci could face as much as $1.3 million in fines and up to life in prison, according to federal attorneys prosecuting the case. UNENVIRONMENT 10/07/20 A new report looks at the illegal trade of plants and animals. From rhino horns, to pangolin scales to rosewood, the world has seen increases and decreases in the illicit trade of plants and animals during the recent five-year period, according to a new report from the United Nations Office on Drugs and Crime. 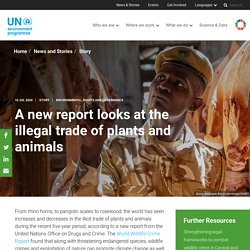 The World Wildlife Crime Report found that along with threatening endangered species, wildlife crimes and exploitation of nature can promote climate change as well as negatively impact public health because of zoonotic disease transmissions. We sat down with Arnold Kreilhuber, Acting Director of the United Nations Environment Programme’s UNEP Law Division, and Susan Gardner, Director of the Ecosystems Division, to discuss the findings of the study and what can be done to stem the illegal animal trade. Why is it important to fight wildlife crimes?

Arnold: I strongly believe that wildlife crimes deserve as much attention as other crimes. PLOS 10/06/20 Trends in illegal wildlife trade: Analyzing personal baggage seizure data in the Pacific Northwest. Abstract The illegal import of wildlife and wildlife products is a growing concern, and the U.S. is one of the world’s leading countries in the consumption and transit of illegal wildlife and their derivatives. 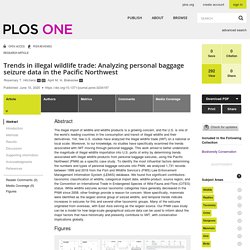 The illegal wildlife trade has emerged as a growing and urgent environmental issue. 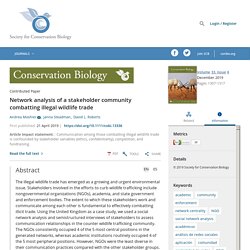 Stakeholders involved in the efforts to curb wildlife trafficking include nongovernmental organizations (NGOs), academia, and state government and enforcement bodies. The extent to which these stakeholders work and communicate among each other is fundamental to effectively combatting illicit trade. Using the United Kingdom as a case study, we used a social network analysis and semistructured interviews of stakeholders to assess communication relationships in the counter wildlife trafficking community. The NGOs consistently occupied 4 of the 5 most central positions in the generated networks, whereas academic institutions routinely occupied 4 of the 5 most peripheral positions. However, NGOs were the least diverse in their communication practices compared with the other stakeholder groups. SOCARXIV PAPERS 18/01/20 Emerging illegal wildlife trade issues: a global horizon scan. Abstract Illegal wildlife trade is gaining prominence as a threat to biodiversity, but addressing it remains challenging. 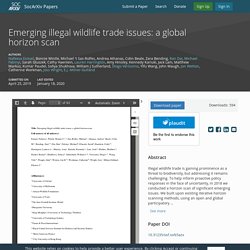 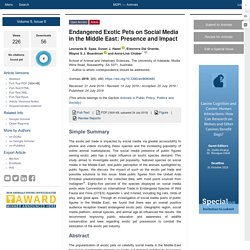 The social media presence of public figures owning exotic pets has a major influence on exotic species demand. This study aimed to investigate exotic pet popularity, featured species on social media in the Middle East, and public perception of the animals spotlighted by public figures. We discuss the impact of such on the exotic pet trade and possible solutions to this issue. Male public figures from the United Arab Emirates predominated in the collected data, with most posts sourced from Instagram®. The popularization of exotic pets on celebrity social media in the Middle East has led to questionable impacts on exotic pet demand and threats to species conservation. ►▼ Figures Figure 1. DEFRA 30/04/19 Illegal Wildlife Trade Challenge Fund: 2019 application round. How to apply You will need to apply online for Round 5 of the Illegal Wildlife Trade Challenge Fund through the Flexigrant application portal. 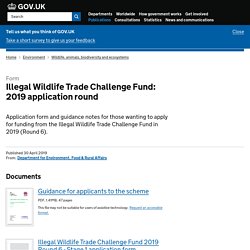 Museums are among the most popular destinations for tourists and they are also frequented by local residents, particularly the youth when it comes to natural history museums. 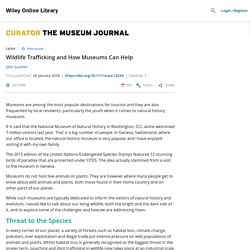 It is said that the National Museum of Natural History in Washington, D.C. alone welcomed 7 million visitors last year. That is a big number of people. In Geneva, Switzerland, where our office is located, the natural history museum is very popular and I have enjoyed visiting it with my own family. The 2015 edition of the United Nations Endangered Species Stamps featured 12 stunning birds of paradise that are protected under CITES. The idea actually stemmed from a visit to the museum in Geneva. Museums do not host live animals or plants. While such museums are typically dedicated to inform the visitors of natural history and evolution, I would like to talk about our living wildlife, both the bright and the dark side of it, and to explore some of the challenges and how we are addressing them.

Threat to the Species. Global Ecology and Conservation Volume 15, July 2018, Trade in bears in Lao PDR with observations from market surveys and seizure data. 1. 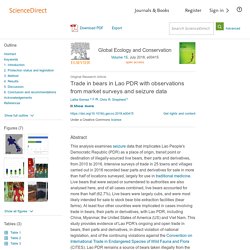 Introduction In recent years Lao People's Democratic Republic (PDR) has surfaced as a major hub of international illegal wildlife trade in Southeast Asia (Duckworth et al., 1999; Anon, 2015; EIA, 2015; Anon, 2016). Illegal and unsustainable wildlife trade is a leading threat to a growing number of species in Lao PDR with records indicating depletion of a diversity of taxa such as cats, deer, pangolins, birds, snakes, freshwater turtles and even insects across the country (Nooren and Claridge, 2001; Phanthavong, 2008; Coudrat et al., 2012; Som and Cottet, 2015). This rampant over-exploitation is due primarily to weak laws and poor enforcement effort, and at least partially fuelled by high levels of corruption (Duckworth et al., 1999; Anon, 2015; EIA, 2015).

Bears are among the many species heavily traded, and threatened, in Lao PDR. Global Ecology and Conservation Volume 14, April 2018 Observations of illegal wildlife trade in Boten, a Chinese border town within a Specific Economic Zone in northern Lao PDR. 1. 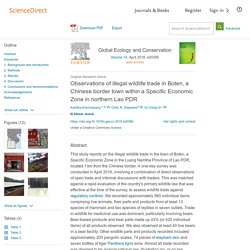 Background and introduction Lao PDR has a long history of illegal wildlife trade, carried out locally for domestic demand, and internationally (CITES, 2014; EIA, 2015; CITES, 2016; CITES, 2017; Vigne and Martin, 2017). This resulted in the country being labelled a hub for illegal trade, with reports emerging with increasing frequency on the trade in the parts and products of tigers Panthera tigris, bears and elephants (Allen, 2009; Ammann, 2009; Ghosh, 2010; Gluckman, 2011; Bottollier-Depois, 2011; Foley et al., 2011; Nijman and Shepherd, 2014; EIA, 2015; Livingstone et al., 2018). It has also had a long history of pangolin trade; a majority of wildlife seized in the country in the 1980's and 1990's involved pangolins (Duckworth et al., 1999; Nooren and Claridge, 2001), with more recent research confirming active trade involving pangolins, either from open trade in its marketplace, or based on pangolins seizures implicating the country (Gomez et al., 2016).

NATURE 26/09/18 Middle East major hub for wildlife trafficking. Major airports in the Arab region are among the main wildlife trafficking transit hubs in the world, according to a new report. “The amount of wildlife trafficking destined for the United Arab Emirates seems to pale in comparison with the sheer volume of wildlife trafficking moving through it,” says wildlife crime specialist, Mary Utermohlen of the non-profit Center for Advanced Defense Studies (C4ADS), who co-authored the report. Titled ‘In Plane Sight: Wildlife Trafficking in the Air Transport Sector’, the report was produced by the C4ADS as part of the United States Agency for International Development Reducing Opportunities for Unlawful Transport of Endangered Species Partnership.

Valued up to US$23 billion annually, the illegal wildlife trade is the fourth-largest criminal market worldwide, and while legal trading of captive-bred or farmed animals is legal, many animals are illegally caught in the wild and passed off by traders as legal—knowing that the provenance cannot be verified. Dr. Kate Brandis from UNSW Science is lead author on the paper and founded the Australian Feather Map. She said that the challenge now was how best to put this science in the hands of law enforcement. Dr. PHYS_ORG 19/09/18 The wider impact of illegal wildlife trade. Next month, world leaders will gather in London at the 2018 Illegal Wildlife Trade conference with the aim of stimulating the greater political commitment needed to stamp out wildlife crime. For most people this will conjure up images of elephants and rhinos poached for their ivory and horn.

Because of that convergence, trafficking in illegal natural resources is a major security threat and environmental risk. NATURE 18/10/18 Novel detection of provenance in the illegal wildlife trade using elemental data. Journal of Asia-Pacific Biodiversity Available online 7 September 2018 Illegal pet trade on social media as an emerging impediment to the conservation of Asian otters specie. Aadrean, 2013 A. AadreanAn investigation of otters trading as pet in Indonesian online markets. EUROPA_EU 25/10/18 EU Action plan against wildlife trafficking. Additional tools In February 2016, the European Commission adopted a Communication on the EU Action Plan against Wildlife Trafficking which sets out a comprehensive blueprint for joined-up efforts to fight wildlife crime inside the EU, and for strengthening the EU's role in the global fight against these illegal activities.

FWS_GOV 03/08/17 What We Do - Foreign Species. COMMISSION EUROPEENNE 23/09/16 EU pushes for further tightening of wildlife trade rules at global summit on wildlife conservation. The EU will participate for the first time as a full member of CITES and will seek stricter international measures against wildlife trafficking, in line with the EU action plan on wildlife trafficking. It strongly supports the continued ban on trade in ivory. DG SANCO 01/02/12 food safety - Guidelines and Reports - General Guidance for CITES Entry Points and EU Border Inspection Posts. TRAFFIC 12/01/11 Malaysia’s new wildlife law used to tackle cybercrime. A man accused of dealing in ivory illegally through the internet becomes the first person to be charged under Malaysia's Wildlife Conservation Act 2010 Click photo to enlarge © Folke Wulf / WWF-Canon Kuala Lumpur, Malaysia, 12th January 2011—A man who put two ivory statues for sale online will be the first person charged under Malaysia’s tough new wildlife laws.

DEFRA 17/09/15 Consultation outcome - CITES: Changing the Control of Trade in Endangered Species Regulations in UK. PARLEMENT EUROPEEN - Réponse à question P-005763-16 Convention on International Trade in Endangered Species of Wild Fauna and Flora. CITES - JANV 2016 - TRACEABILITY SYSTEMS IN THE CITES CONTEXT : A REVIEW OF EXPERIENCES, BEST PRACTICES AND LESSONS LEARNED FOR THE TRACEABILITY OF COMMODITIES OF CITES-LISTED SHARK SPECIES. PARLEMENT EUROPEEN - Réponse à question E-006910-16 Combating wildlife trafficking. Over the past few years we have seen an increase in illegal activity involving wildlife. Shocking pictures have become an everyday occurrence: rhinos bleeding to death, sharks being caught for their fins, birds and reptiles being smuggled across borders and kept in inhumane conditions.

CITES - SEPT 2016 - ILLEGAL TRADE IN THE HELMETED HORNBILL (RHINOPLAX VIGIL) NORWEGIAN SCIENTIFIC COMMITTEE FOR FOOD SAFETY 27/07/16 Assessment of species listing proposals for CITES CoP17. The submitted species proposals are concerned with the amendment of species to CITES Appendices I and II. The proposed amendments will be considered at the CoP17 meeting in Johannesburg, South Africa, September 24 to October 5, 2016. For the species considered in the proposals, VKM has assessed whether or not legal and illegal trade could be detrimental to their survival.